The compressor is one of the most important parts of the airbrushing system. It is almost as important as the airbrush itself and sometimes it determines the end results based on the qualities that it holds. In general, it is not a complex machinery. Every refrigerator has one, but don’t let that fool you. There are many fine lines that shouldn’t be crossed and the tool itself should be fine-tuned for perfection.

The really great devices on the market are with decent size. That is the price one must pay to have a good compressor with air tank, moisture trap and pressure gauge, that can support multiple airbrushes and in the same time to be quite and movable. By movable I mean the ability to take it with you and not feel like you just went to the gym and overdone it there. Some of those compressors have handles, casings and many goodies that help, but still the size and the weight are the issues that one cannot avoid. 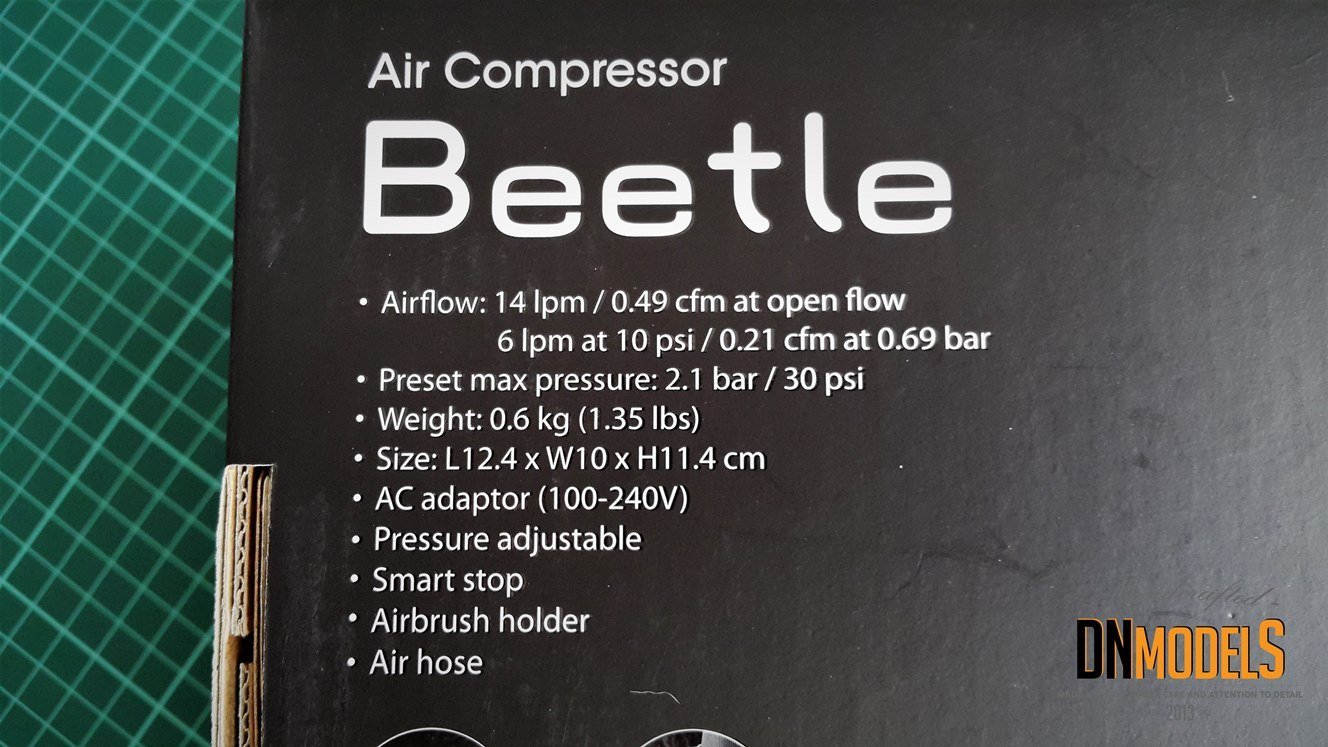 So for some this might be a problem. And of course, with every problem there is a solution. There are new generation of compressors, which are small, quiet and portable. They work with batteries and are easily usable with all kinds of electricity, no matter where on the planet you are located. That is perfect for those who are constantly on the run and travel by plane, where allowed baggage weight is shrinking by the minute.

Box and its contents:

In a typical Sparmax luxury black box, we have a cardboard casings placed internally to separate the parts inside. With the set of the Beetle compressor, we get a power cable and a transformer, just like on a regular laptop, a transparent hose with a plastic screw that fits the beetle perfectly and a simple, but well explained instruction sheet. 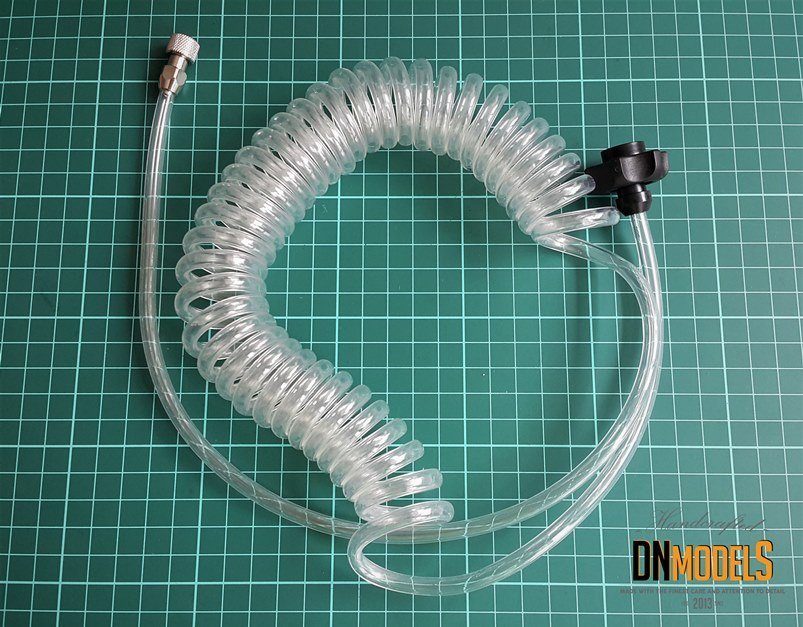 Everything is arranged in a way that even if you decide to take the whole original boxing with you, you still won’t be bothered by the overall size and weight. Let alone if you take those things separately. One thing I want to note here is that the hose is coiled, which takes a bit more space than usual, but that is a bonus feature anyhow. Another point of view for that hose is that the coil helps with the moisture. 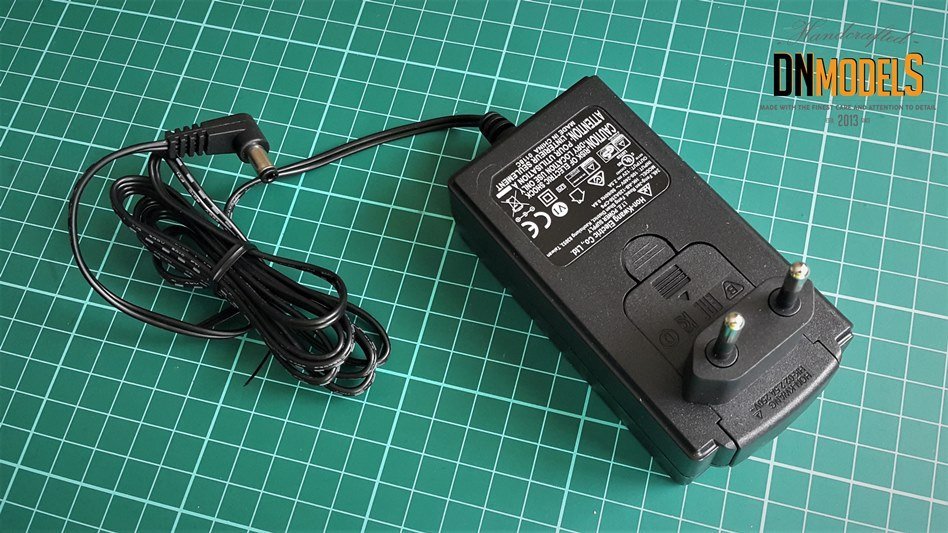 The power box that I got with my Sparmax Beetle is suited for 220V EU standard. However it is clearly visible on the pictures that this can be easily exchanged for a different standard and especially important if you share your time between different continents.

The Beetle compressor itself is a cute little box, featuring a pressure knob, Start/Stop button, airbrush holder and conical silicon feet, which in my opinion are its coolest feature. Thanx to those four fellas, there is almost no vibration and even if you put that on your table where you paint your model, you won’t note any difference while spraying.

The size itself – is too – visible on the pictures. It is a slightly larger than a soda can and almost the same form and volume as a box of chocolate truffles. It is very comfy in the hand and designed in such a way, that you cannot drop it on the ground accidentally. Very stable and with a firm grip on the surface that it sits on. 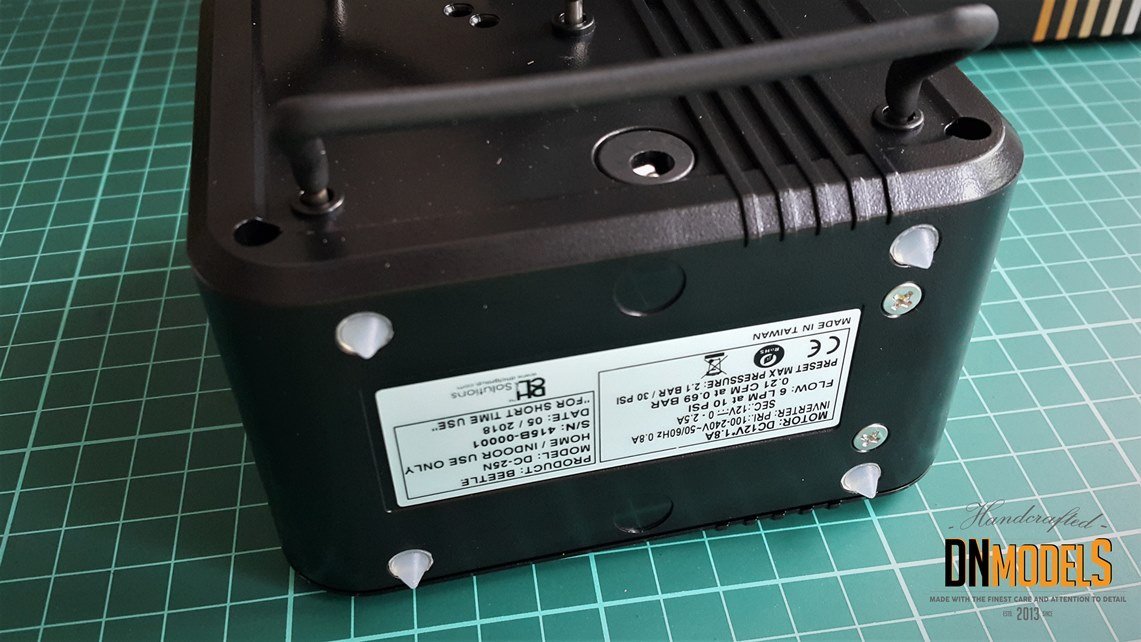 The size of the Beetle makes it perfect for small modeling rooms and for people who do not want to invest in larger compressors for the obvious reasons. Alongside with those, the investment is very reasonable and the combination of the low noise, size and reliability makes that very tempting purchase.

Smart stop feature is on top of my list here. The reason for that is the size which comes with its downsides. The lack of an air tank can be compensated only with such a feature. When you stop airbrushing and put your airbrush on the holder of the Beetle, it automatically stops. That saves the compressor’s life, electricity /especially important if you are on battery power/ and it makes it even less noticeable in terms of noise. 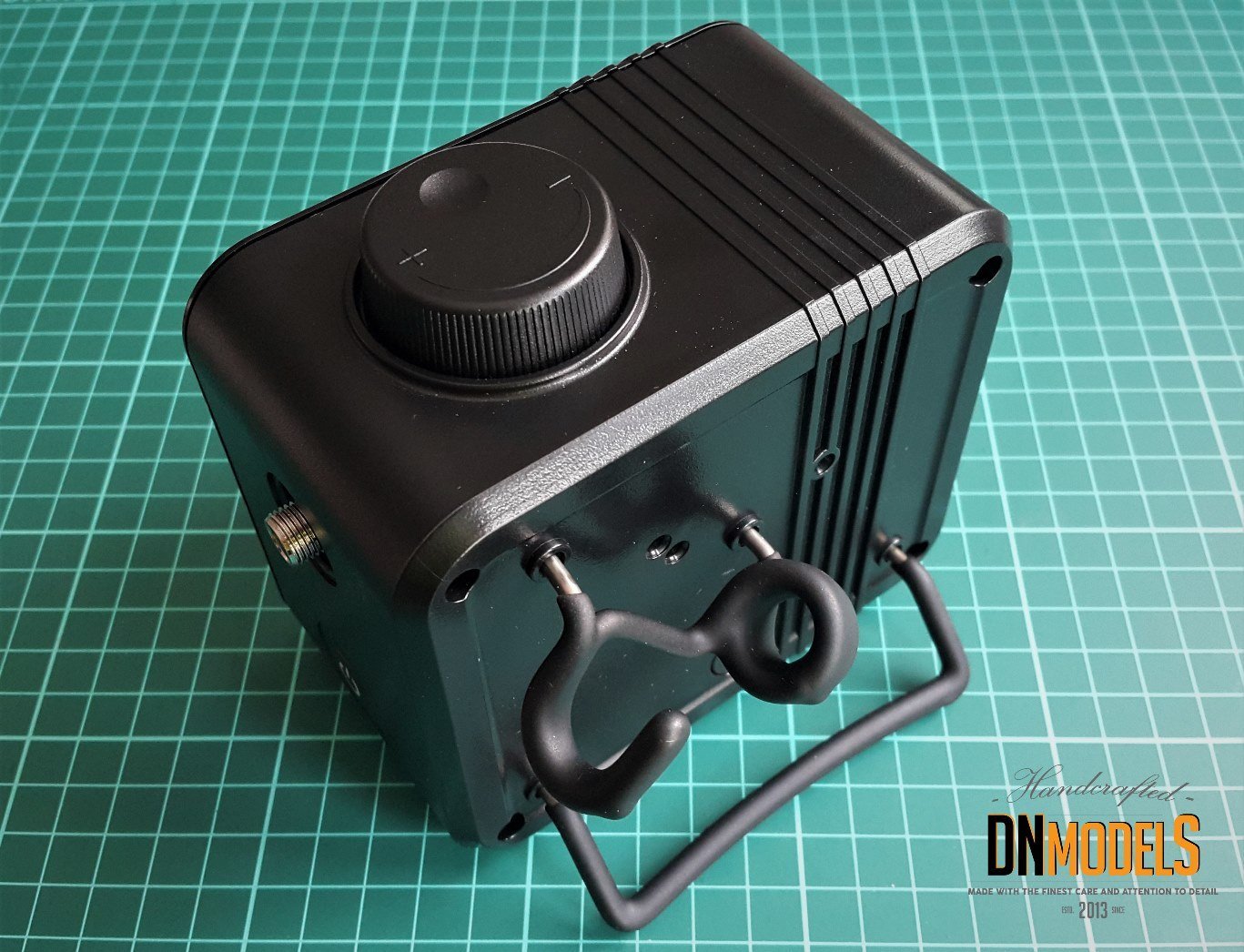 Second most important feature in my list is the pressure limits. The compressor is set to work with the pressures most widely used when spraying acrylics, lacquers and Alclads. There is no gauge, but the turn knob is limited within minimum and maximum and from what I tested, it seems that the range is pretty well balanced. The air might be insufficient only for high pressure settings for cleaning the airbrush, but not everybody uses that method anyhow.

Third most important feature in my eyes is the battery power option. More than once I lost a compressor due to some kind of a mechanical failure or even worse – my spray session was ruined due to electricity breakage. For such a case, the Sparmax Beetle is indispensable. You can easily take it from the box, put the battery power and continue the work that you started with your main compressor beast, without the worry that your paint job is ruined. In my opinion, Sparmax did a brilliant job with that decision. 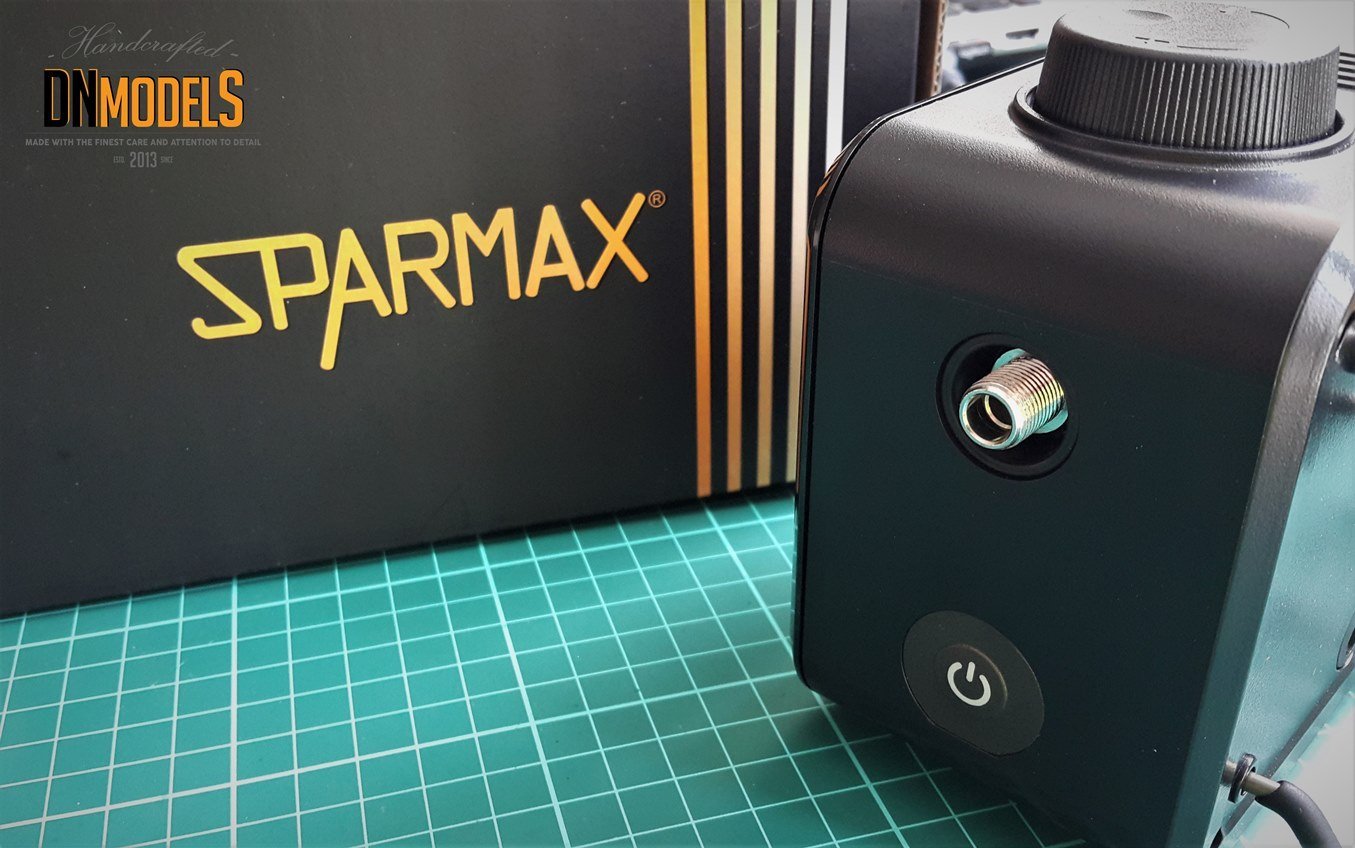 Sparmax Beetle performs reliably as mentioned above. Yes, you might want something more complex if you are using a high-end airbrush and you are desperate for absolute precision, but the normal spray session is pretty much covered. The combination with a regular airbrush, something in the range of .3mm to .5mm and normal paints or primers should be perfectly fine and easy job for everybody. 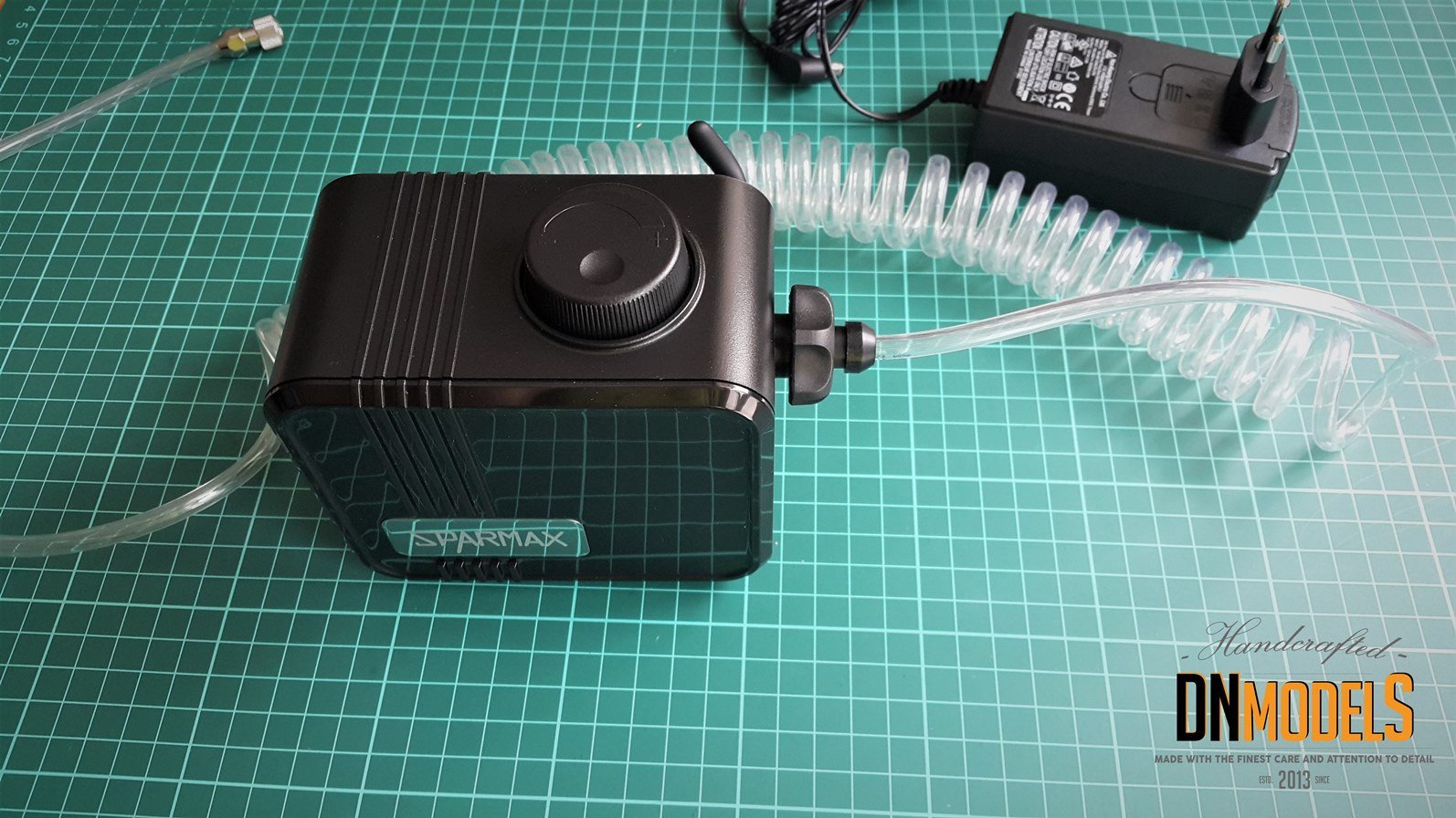 Even though there is no tank and pressure gauge, it is rather easy to make the Beetle work steadily and to provide consistent results. Again, the lack of vibration is important, since while working and with those silicon feet, the compressor is as if it isn’t on the bench at all.

Sparmax Beetle is an interesting decision. From whatever perspective, this compressor has its place on your bench. You might wonder why would one need it if you already have that dual-piston beast that can support 4 airbrushes simultaneously and have 3 moisture traps and fine pressure regulator. Well, for a those of you, that answer is: Back Up. Especially with the battery option mentioned. The latter one is optional and not included in the set. But highly recommended. 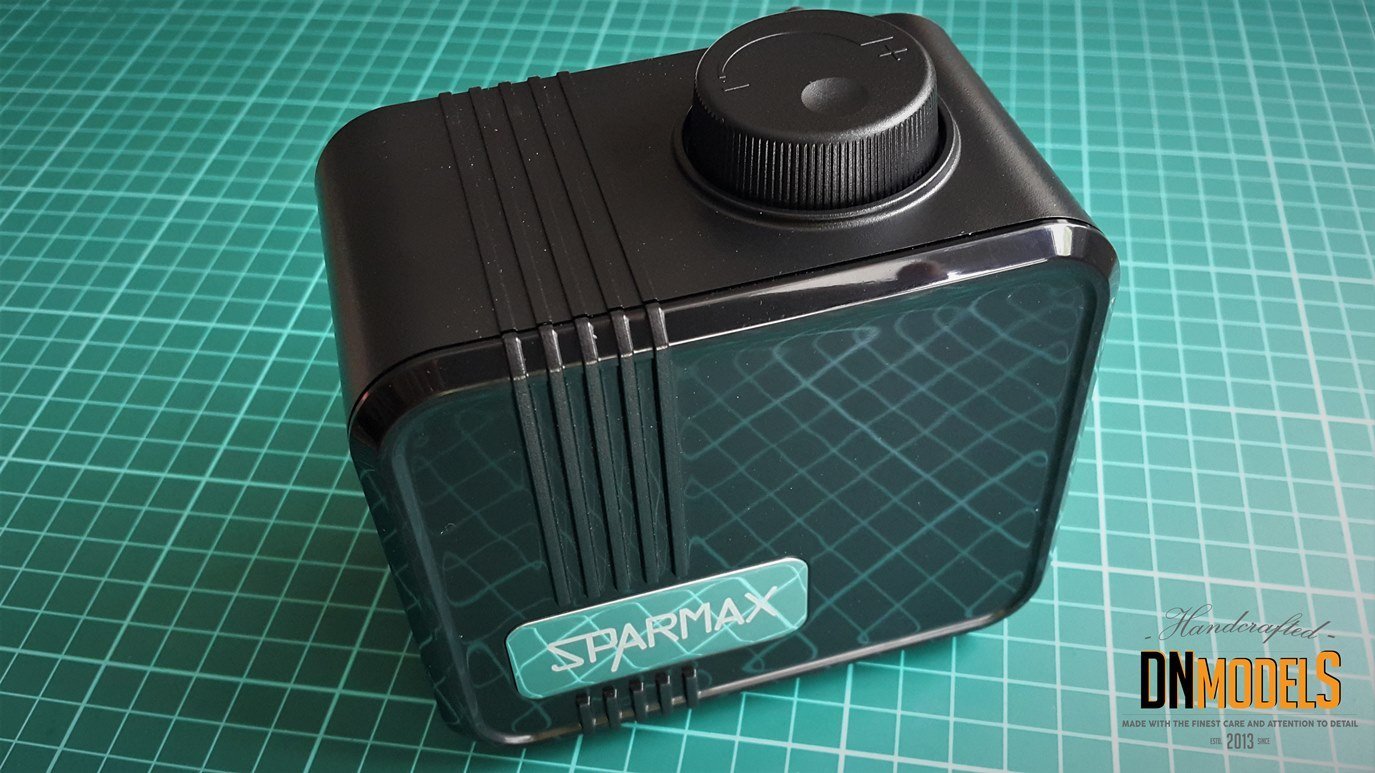 For the modelers that are not that well equipped, the Beetle is exactly what you can get when you buy a Smart Car. It is small, you can park it perpendicularly and still, in 90% of the time it does the job that you usually use your minivan for. Yes, there are those 10% when the Sparmax Beetle won’t suffice. But it wasn’t designed as an all-‘round tool anyhow.

In my opinion, you should check it out and if possible – give it a try. A five minute test with the Beetle and you will quickly learn why Sparmax are a leader in the airbrush industry. And in the end if you can afford it, you shouldn’t hesitate: whatever situation you might end in, the Sparmax Beetle can be a very neat a tricky way to get out of it with finesse!