When Kitty Hawk released their first kit of the Voodoo couple years ago, it was a big hit. It had its issues, but of course nothing major and nothing that can push away the Voodoo lovers. F-101 is a plane that might not have the fame and glory of its bigger cousin – the Phantom – but it is a milestone in aviation by all means.

The standard variant is not that popular though. The reconnaissance version is the one that is most famous. So back in 2014, the expectations were that Kitty Hawk will release it probably within a year or so. But no such thing happened. Many speculated that the reason is that Kitty Hawk never sold enough of the Voodoo in the first place, but almost all of my modeling buddies have one in stash or built. So I assume the reason was something different. Anyhow, fast forward to 2018, and we have two Voodoos on the line. The double-seater and the upcoming RF-101C.

Since the kit isn’t that complex and the design has to be altered slightly, we can expect to see the Recce Voodoo pretty soon. Probably within weeks. In 48th scale the plane is decent in size, so the price won’t be on the low end most likely. On the other hand, I really do hope that Kitty Hawk has improved their original Voodoo, since the RF-101 needs alterations in terms of plastic, which eventually might bring with them improvements on the basic kit too. 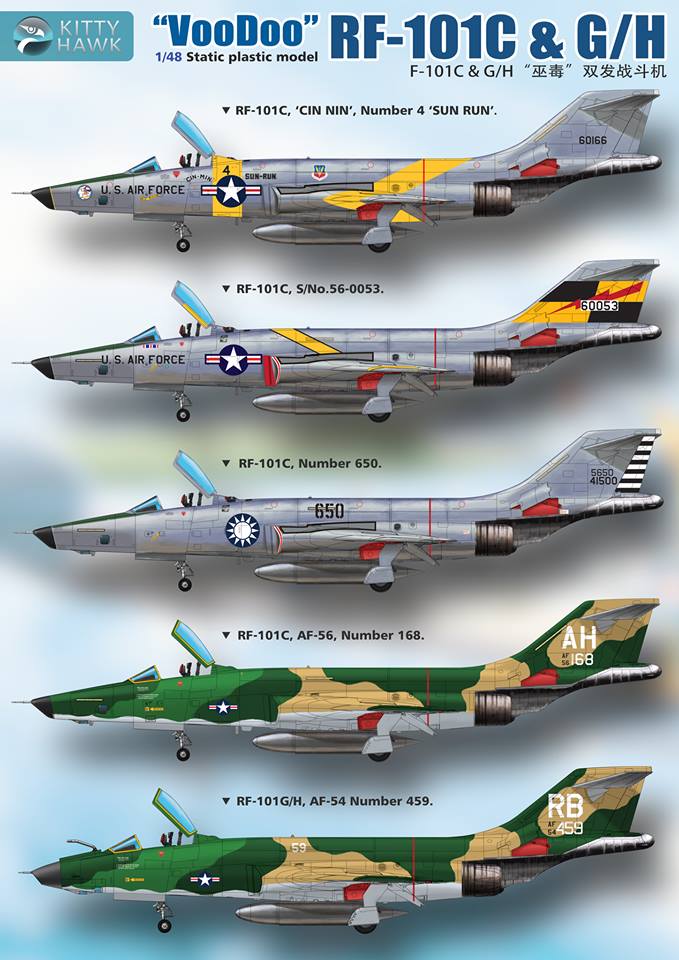 What is known is that the kit will feature RF-101C, and RF-101G/H. In total 5 painting options, but in reality, a lot more to be dealt with. Voodoo was mostly bare metal in color, but it flew in an era, when high-visibility markings were the way to go, so with a little research, miracles can happen. On top of that, those wonderful shades of different metalizers will give any modeler a huge field to work with a lot. Best of all, is that different shades of metal are most visible on black and white photos, so knowing the time when RF-101 Voodoo flew, that is what one can expect to get mostly.

Perfectly sound decision from Kitty Hawk and even though a bit late, it is better than never! Voodoo is a big bird and with no problem one might spend couple of months working on that big chunk of scaled down airplane. So prep your metalizers, single-action compressors and reference materials! The Recce Voodoo will be here soon!

Pictures are courtesy of KittyHawk