Let’s start with an odd fact. It is nearly the end of 2020 and there is still no new tooling of the Rafale and Eurofighter in 48th scale. The only decent ones that we have are Revell’s which are rather outdated. And that goes for both. Here we’re gonna focus our attention on the Dassault Rafale. Being the less popular of the two, Rafale’s representation is also the better one of them.

It might be surprising, but despite both being the last 4th generation fighters and somewhat symbolic to the end of an era, European modern fighter planes were left aside from the modeling scene. That comes even with the fact that both are still produced/sold and amazingly – last couple of years even better than before. But let’s not rush it. Maybe Revell releases aren’t bad, but actually the opposite.

When it comes down to boxes, Revell is defenitely on the weaker side. They never actually made a really imrpessing box and on top of that, even with good kits, the finished model pictured on their boxes are ridiculous. Very good example is the MiG-21SMT which was released lately. That is Eduard’s re-box and the kit as we all know is superb. But the pictures show rather mediocre completion and paint job that might be mistaken for 12 year old’s. That is exactly the opposite of what you are getting with Eduard’s Fishbeds.

Luckily, the Rafale that we are unboxing today does not feature pictures of the built kit on its sides. And thank God for that! Other than that – the box is the typical Revell, with side opening and rather thin materials. Both unpractical and also easily damageable. Not a lot of information on it too, but we are living in an age that this comes easy. 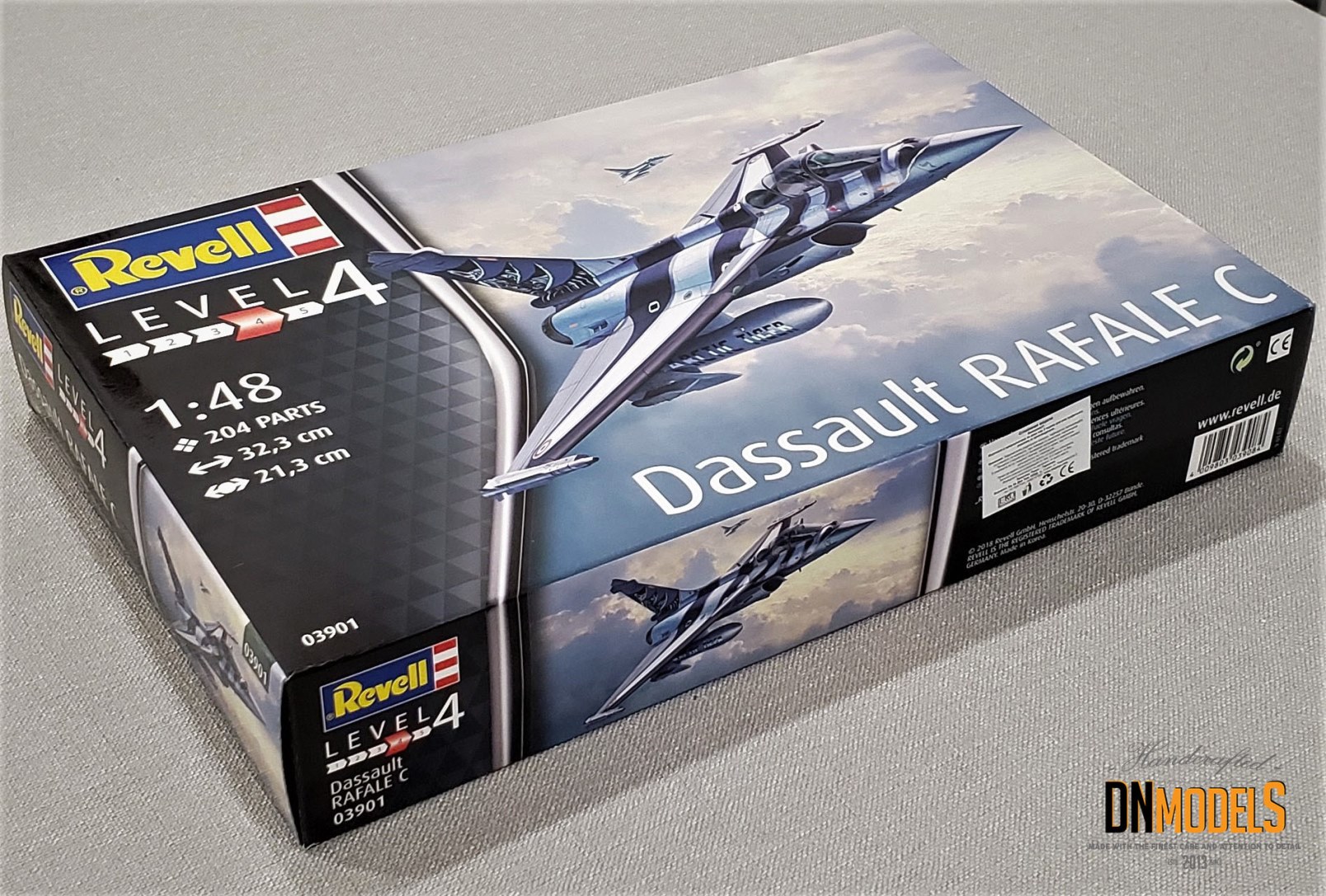 But wait. Oh no! There are built model pictures on the back of the box… But this time, it is not that bad. Actually this gives some justification of the real contents of this box. A rare sight and a pleasant one too. However, even with that said, if anyone from Revell is reading this – get rid of the pictures of completed models guys. This ruins the idea to some extent.

The boxart is decent, featuring a special scheme Rafale, making the overall look more impressive and tempting. Previous boxings of the same kit – which are several and date back from the end of the 90s – are also good, but probably this one is the best so far. This is something Revell did long ago with their F-16s and with others too. Germans are good with representing anniversary or special schemes airplanes. It is a clever marketting strategy as well.

When speaking about Rafale specifically, it is also worth mentioning that there were reboxings from other companies and all in all, M, B and C versions of the Rafale were all covered. We are looking at the latter version in this review. Among them all – this one is still the best in terms of packing appearance. In terms of contents – pretty much they are all close to another.

The instruction sheet is NOT the good old Revell that we are used to. This one is very improved. First thing to notice is that it features color. And it seems that this will make things a bit easier and definitely more pleasant for the eyes. Still it lacks the sophistications both in looks and information when compared to the best out there /ZM for example/, but it’s good. Quality of the paper is pretty decent and in general, for the price you pay for this release, it is over-delivery from Revell’s part. The color representation makes things a lot easier. German model maker made a good effort with it. Everything they picked – from the nuances through the icons and arrangement looks like a success story. Even if this is your first kit ever, the instructions are designed in a way to make your journey a breeze. Way to go Revell!

Special emphasis on the paint sequence can be found in the end. The special scheme is splitted in two sections, the paint job you have to apply and the follow-up with decals. Again, clearly explained and in perfect coloring. No means were spared with this sheet. Nice touch, indeed.

Here is probably the strongest side of Revell’s Rafale. After all, boxing and instructions are just means to an end of a sort. And the end result is made by platic. So it is time to get serious here:

Light gray platic, all packed together in an transparent envelope, with surprisingly good detail. Actually quite great. Here is a good place to mention, that this is probably one of the reasons why there are new and improved Rafale toolings out there. The first glance here is an absolute eye candy. The quality of the material is typical Revell, so no complaints about that either.

Now, when it comes down to details, things probably get a step back. A small one though. When you dig deeper in your research, you might find that Hobby Boss released their representation of the Rafale. It is very very /actually suspiciously/ close to this one, but features more rivets here and there. Lacks some details too. But the step back that was mentioned above, is the fact that a good Rafale in 48th, would’ve featured both from those two kits’ strong sides in one boxing. There is a feeling that Revell could’ve added a touch or two more here and there.

For some, it is acceptable, because some old-school riveting and re-scribing might do the job and transfer this Revell’s Rafale into a quarter scale perfection. But for many – and especially in 2020 – this shoud’ve been included in the release. Just a hint about Hobby Boss – you will need some aftermarket to make that one good enough.

There are some accuracy issues with Revell’s Rafale wich will be mentioned in a link below, but the overall feeling is pleasant and again, for the price tag of this kit is over-delivery from German model maker’s part.

This is one thing that can be imrpoved significantly, but unfortunately aftermarket companies are not interested in Revell’s Rafale that much. The main reason is that it seems accurate in shape and size, but the thickness and quality are looking exactly like they are 20 years old. When compare it to anything relased in the last 2-3 years, you can note the difference.

We are not saying it is not acceptable. On the contrary. But this is a small sign that Rafale needs a re-tooling from another company. Or the same company. Whatever. Maybe a re-scaling too, but that is antoher subject. After all, after 20+ years on the market, somethings gotta change. It is inevitable.

Decals are one of the best features of this kit. They are printed in Italy and with the large parts that they represent, we must give it to the Revell’s and their choice of decal maker – this was a good call.

The transparent films are visible, but they look like troubleless fraction of the elements. If this was created by Cartograf, that would’ve been definitely the case. We’ve read that they are probably the design work of Syh@rt, which also is a promising information. Whichever it is, not a lot of complaints out there, especially when compared to Tamiya’s decals of the same period and scale. Once again – decal sheet is great with this release. Probably only masks could make this kit better in the end.

If you think that the special scheme is the only one you get with this kit because of the specific boxart, you are wrong. There are two. And they are as follows:

One is the standard low-visibility grey scheme, the other one is the Tigermeet variant, one of the many Tiger variables that Rafales comes with in real life.

Revell’s Rafale is actually a great kit. Being an old timer from 1999, this was pretty much top of the line release back then. As of today, this is the best Rafale representation in any scale. The really nice feature of this kit is the price tag. That, added to the fact that it is modeler-friendly to some extent, make this purchase a reasonable one.

The more detailed review of Revell’s and Hobby Boss’ Rafales can be found here. A great modeler and a friend of ours built those two and noted the most significant issues found with them. Besides, this is one of the best modelers we know and we strongly urge you to take a look at his Rafales. They are both very inspirational.

But being an honest review, this lead to the conclusion that this kit is not perfect, even though very good. A combination of the price, good decals and minor flaws, makes this Rafale a very tempting option for experienced and novice modelers. The other way to go is to wait for a new release. Which will be unlikely to happen having Revell’s acceptable quality and price already present.