This is battle of the concept, rather than battle of brands or features. Single-action airbrushes were there at the beginning steps with most of us, so more or less they represent the simplicity and straight-forwardness of the paint process. Dual-action airbrushes /at least for most of us/ came at a later stage and proven to be more precise, suitable for finer work, more controllable and of course – more demanding.

By demanding I mean maintenance and training. Maintenance is mandatory for an airbrush and includes disassembly, cleaning, lubing and sometimes – parts exchange. Since dual-actions are usually with smaller nozzles and finer needles, they tend to suffer from damages and are fragile in general. That causes additional headaches. 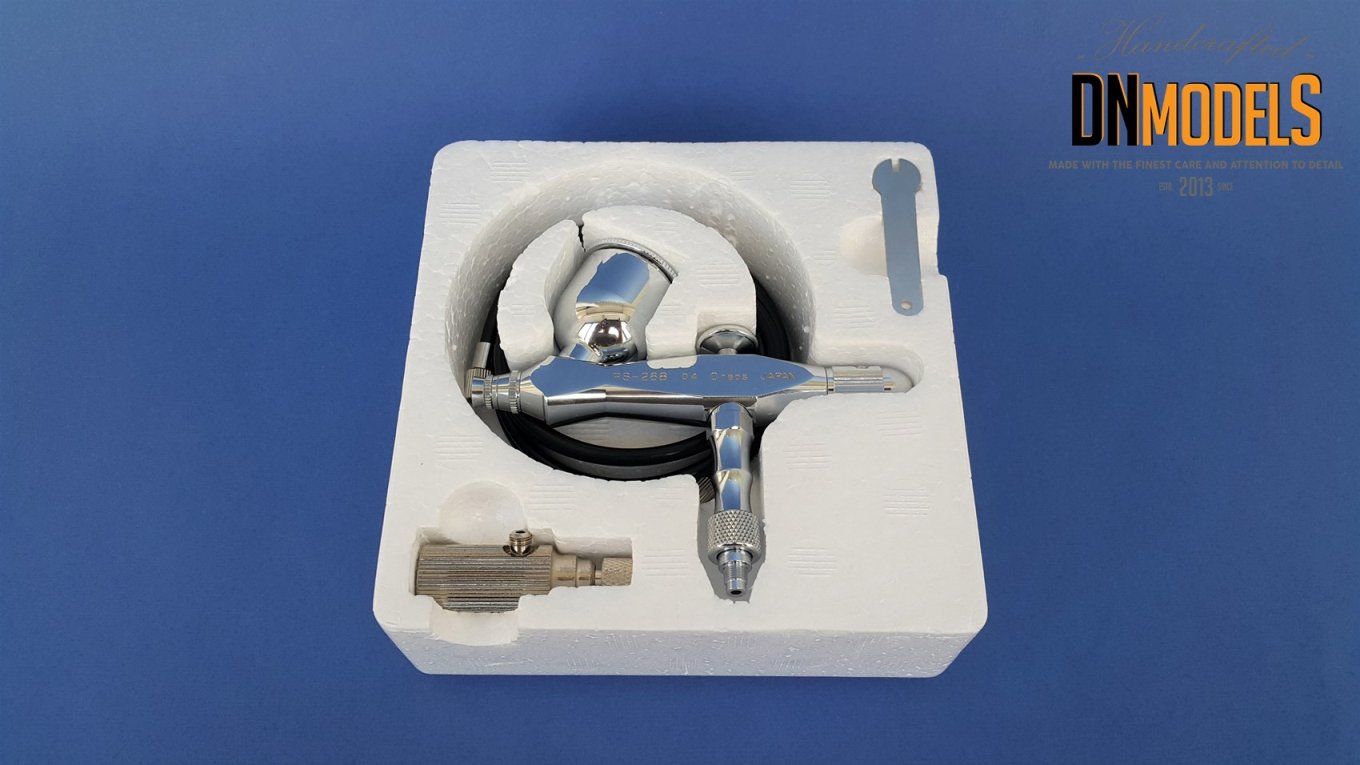 As for the training, same reasons stated above makes them more demanding to the hand of the person who is airbrushing, since almost everybody can shoot a gun, but only a few can use sniper properly. So with that comes the forgotten good side of single action airbrushes that is often deliberately missed.

The truth is that they bring simplicity with them and even less accurate, they show enviable results with fewer risks when cleaning and a lot less to worry while working with them. There are some on the market that are famous, others – not so much. Iwata Revolution HP-M2 and Badger 200-20 are best known, as well as Mr.Hobby PS-268, but there are more. There are even Chinese copies of the design of PS-268 and M2, one of which I have tested too.

comes in a modest boxing, made mostly for store display. Inside, SQ is lying in a Styrofoam bed, and overall looks very basic at the shelf. The box includes some add-ons like hose, Mr.Air can supply attachment with regulator, a transition from 1/8 to smaller fit /the hose/ for the SQ, a lid for the paint cup and of course a wrench.

The nozzle featured in the set is .4mm which is close to the most popular applications on the market of .3 and sometimes .35mm. It is on the upper end in those terms, which suggest general use. The fact that it is combined with single action airbrush adds to that. 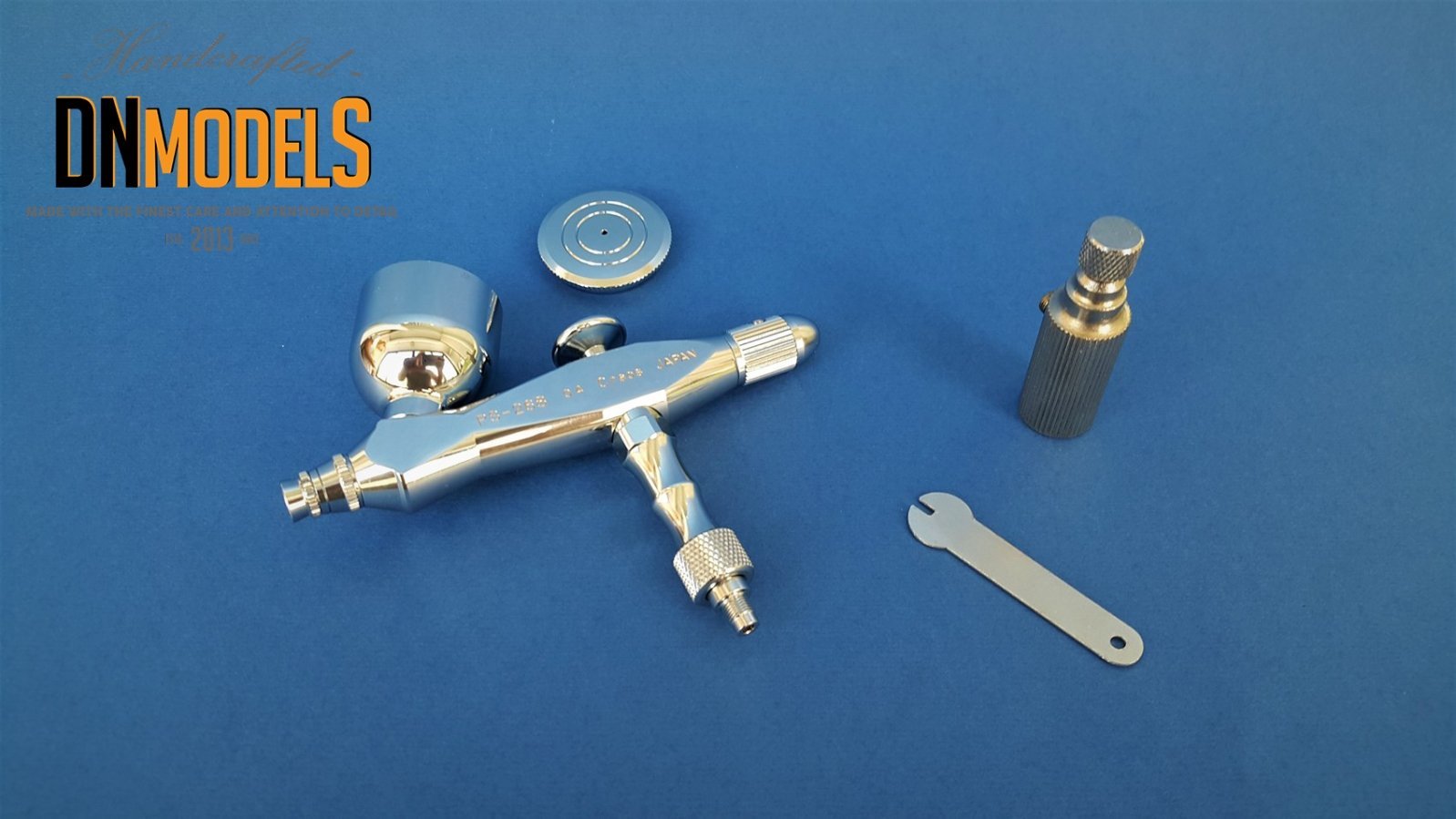 Procon Boy SQ is made in Japan, and as one might expect the craftsmanship is at a very high level. The airbrush body is polished, with engravings on the side for the model of the airbrush, company and the size of the nozzle. The 7ml color cup features smooth finish, easing up paint flow and the lid sits there pretty tightly.

The PS-268 is with a different design compared to conventional airbrushes. It is shorter and it gives a feeling of a sturdier tool, being heavy and thick. That is not like on some of the single-action airbrushes available out there – Badger and Paasche for example. However, Iwata HP-M2 and Chinese replicas /of course/ share that approach and from what I learned from fellow modelers – it is a successful concept. It is comfortable and allows you to work using your thumb instead of your index finger for the trigger action, which makes the grip more comfortable sometimes. 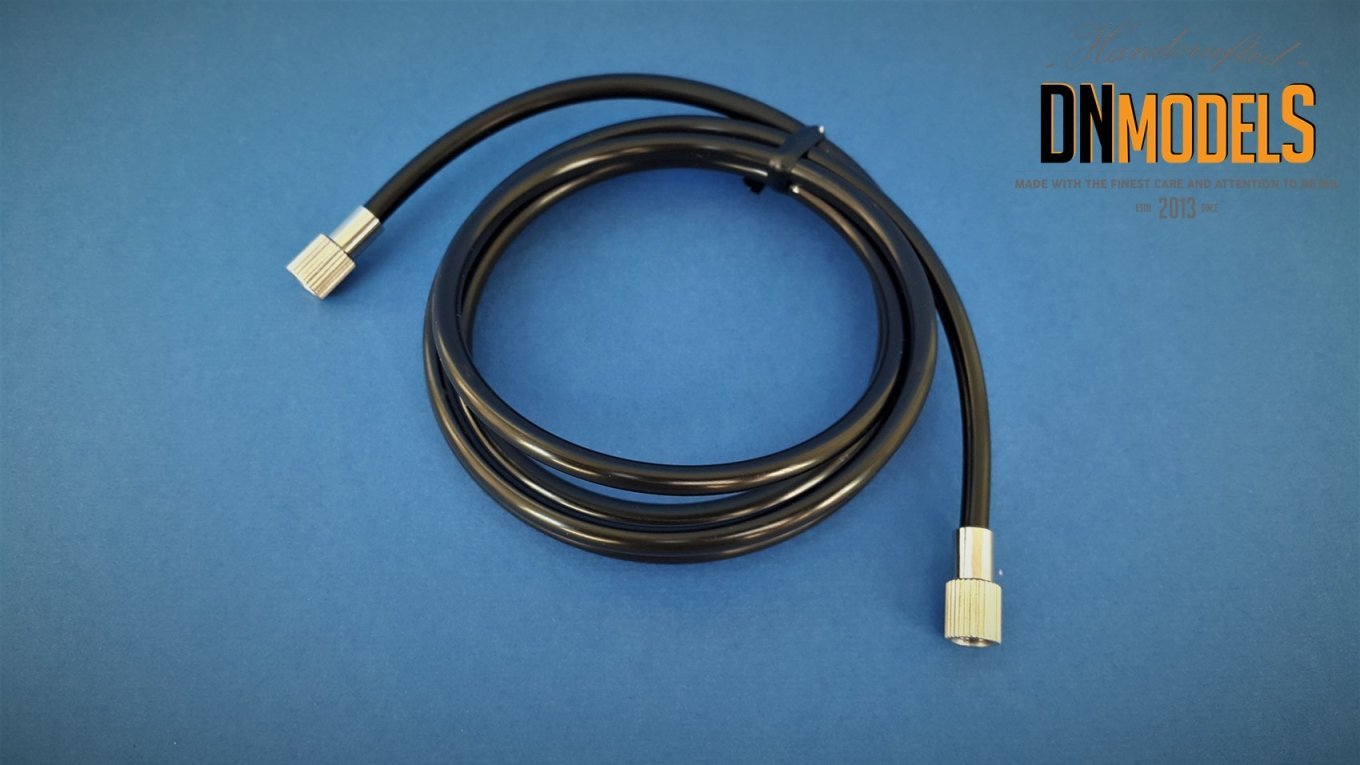 The needle can be regulated from the swiveling knob on the tail, which is directly attached to the needle. Latter one is shorter than usual and pretty thick looking due to that fact and its size of .4mm. It goes through the trigger which works one way only – down. Action of the knob and the trigger are smooth, probably due to the good craftsmanship too.

As mentioned above, the foot features 1/8 fitting which is standard and a moisture trap can be fitted there with ease. It is long and creates somewhat of a triangular form for the airbrush, if you count out the color cup.

PS-268 weight is significant, which was my favorite side of it when I first tested the SQ. It is over 140 grams and that helps me control it and improves the general feel for the airbrush. For some that might not be the case and Mr.Hobby thought about them too. There is a colored series which features two other airbrushes from the same design: PS-268AB and PS-268AR. They weight less, due to the materials used. Actually, the weight was brought down nearly 50%. So to each his own. 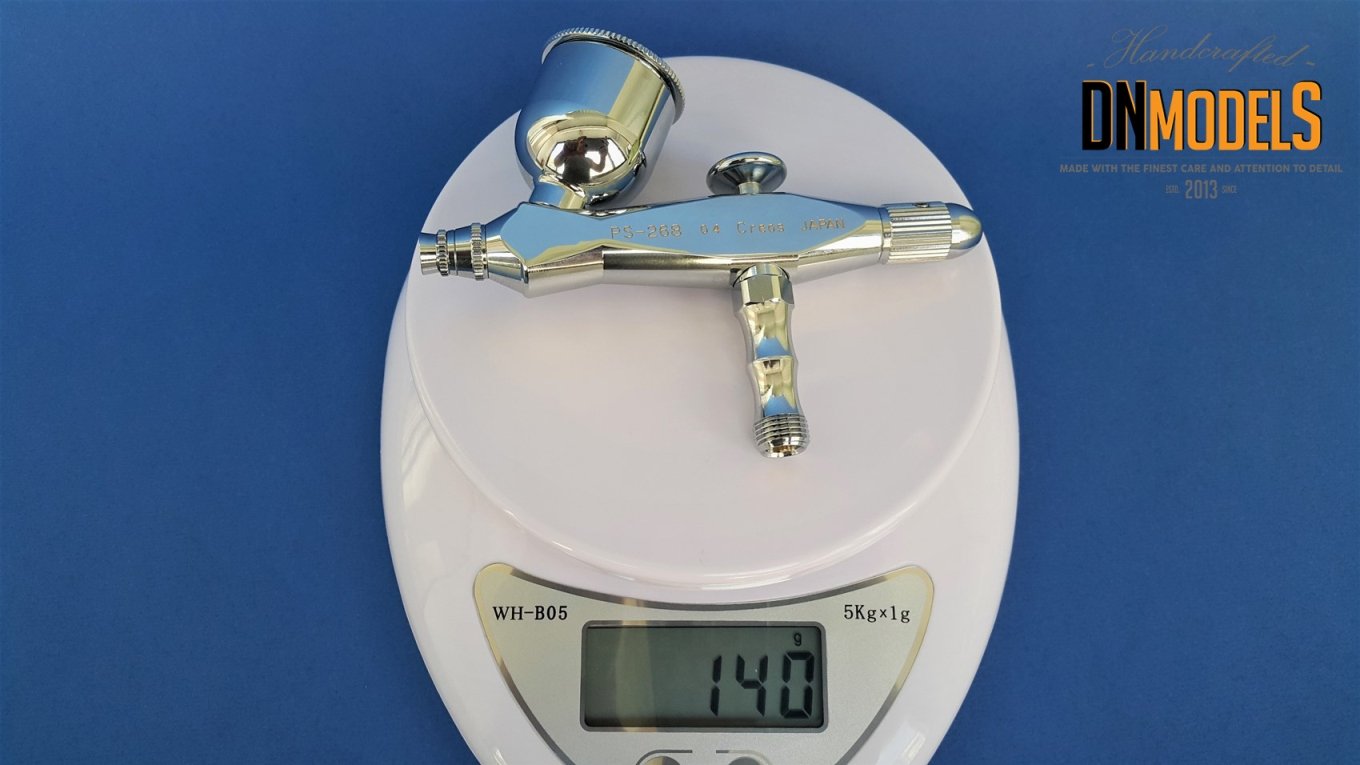 PS-268 wasn’t the first single-action that I tested, but was the first Mr.Hobby single-action that I used. The primers and the varnishes are pretty self explanatory, as well as the Alclad2 paints, but the paints and finer applications is something different. They reveal the real performance of the airbrush, since the paint applied is often not consistent in order to create lines, shades, borders, etc. 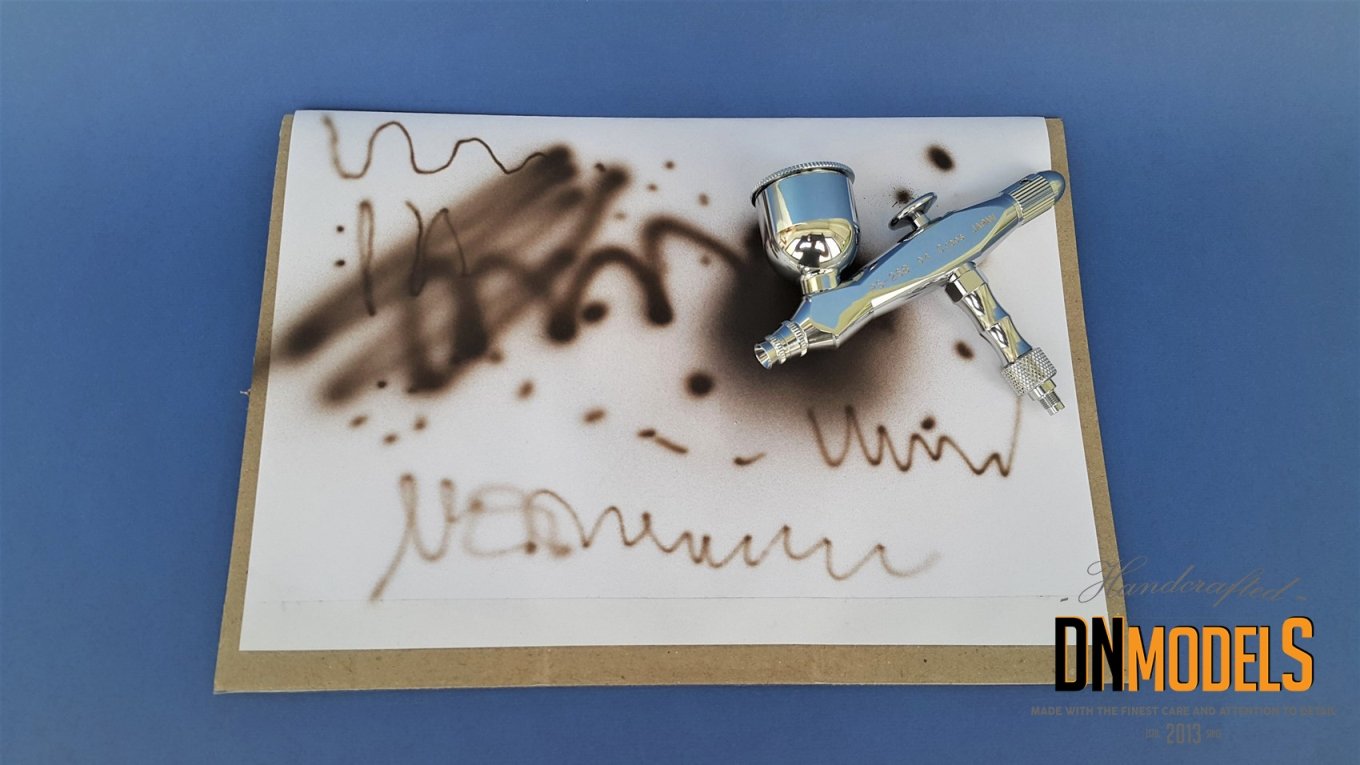 The paint that I used was from AMMO by MIG for two reasons. First one is that even though prepared for airbrushing, MIG paint requires additional dilution even with a bit so to achieve the desired results. Second – those paints are famous for giving headaches to many with dry tips and uneven pattern.

That was an additional challenge for the airbrush and I must say it coped with that flawlessly. If you care to watch the video in my YouTube channel, it is all there. If not, long story short – the airbrush handle itself perfectly within wide ranges of pressure. I am usually working between 14-16PSI or 22-25PSI depending on the object painted. Sometimes I go lower, even down to 8PSI and for cleaning I use up to 35PSI.

Within those ranges I had no troubles with the paints and PS-268 gave me the ability to do mottling, lines, even writing with the finest tune that I managed to make in the first session. Better results can be achieve with fine tuning the pressure and the paint dilution, but I avoided that so a general user who doesn’t pay that much attention can fathom the real capabilities here. After all, not all of us wants to go through all that hassle of prepping and setting up. 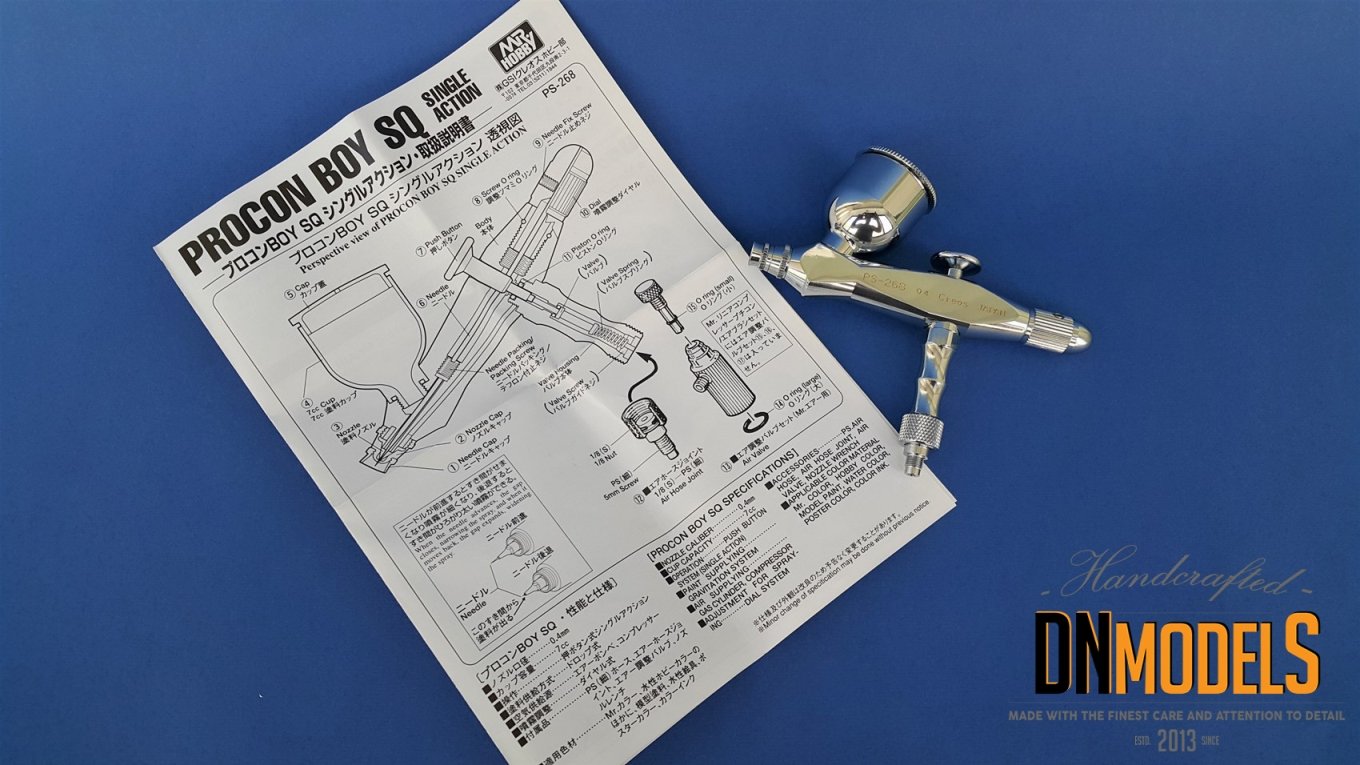 As mentioned above, PS-268 has .4mm nozzle, 7cc color cup with lid, adjustable needle and 1/8 fitting for the hose. Iwata Revolution M2 which is arguably the most famous of this type of single-action airbrushes has the same characteristics. However, Iwata are more popular as a brand and as we all know – name sells more often than not.

Price is important factor though. PS-268 has 1/3 of the price on its tag compared to Iwata Revolution M2. It performs equally. Math is pretty simple here. Even if it was a worse performer, which is most definitely not, Procon Boy SQ would’ve performed well enough to justify the better investment. Boy, Chinese copies does not perform 3 times worse than Iwata M2 and costs like $15. PS-268 is probably the best thing you can get. The price and the performance makes it far better than any Chinese copy and Iwata doesn’t deserve the price it bears since it is not that times better. It is practically the same. 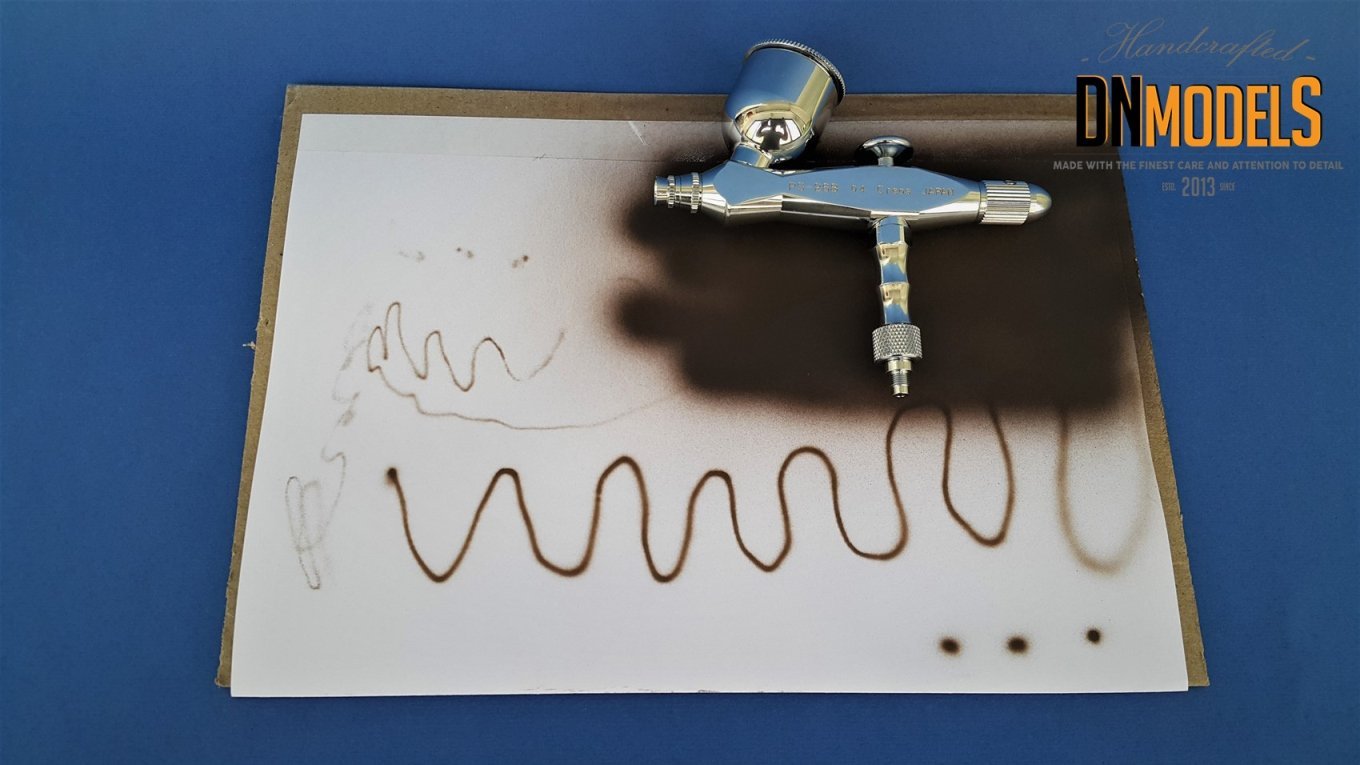 Last few words justify the purchase. Not only, but Mr.Hobby airbrushes are very good in quality overall, so even if not comparable they still deserve attention. Which is not the case here. I believe that Procon Boy SQ is one of the best, if not The Best single-action airbrush with that form that you can get on the market. There are weight options with PS-268AB and PS-268AR, there is a huge price difference and superb quality.

Mr.Hobby tools are not that popular as Iwata and Harder and Steenbeck in Europe, nor like Paasche or Badger in USA, however they are wonderful tools. Procon Boy SQ PS-268 is a living proof for that statement. With its price tag, performance and origins, the SQ is one of the musts for every modeler.