Among high-precision airbrushes that I got my hands on, PS-270 Platinum is the most affordable one. I am starting with this, because quality, especially the last decade comes at almost unbearable price. Market is flooded with Chinese replicas, who tend to satisfy many, while in the same time is slowly but steadily killing the good companies, dumping their sales and forcing them either to lower their quality or, due to the lack of sales quantity – the increase prices of their new products.

High-precision airbrushes from Iwata and H&S /the leaders on the market/ are costing insane amounts, even though providing wonderful results. In the same time, modelling is becoming more and more competitive, due to the tons of information in Internet, shared techniques, ideas and more. 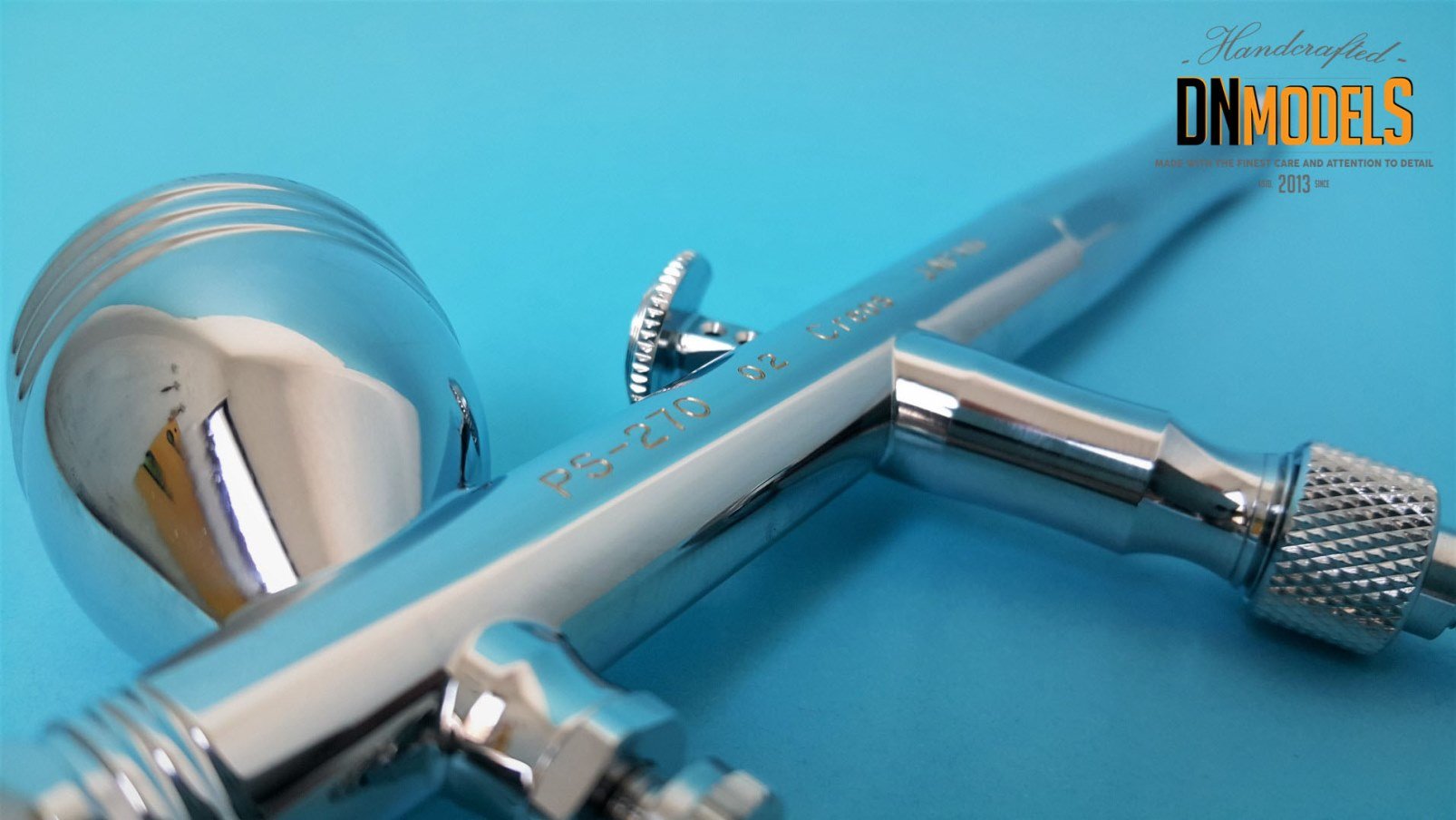 Modellers are trying to elevate their level and tools are a mandatory expense when it comes down to that. So the question that arises is: Do one must accept and live with the compromise of buying cheap Chinese substitute, marketed as a ultra-high-precision airbrush, or go for the real thing, pay more and live happily ever after?

Paying the cost of H&S or Iwata Custom Micron is not for everybody’s wallet, nor mentality. On the other hand, the Chinese cheapos have a lifespan of a fly. So what one should do? Below is the answer.

PS-270 Procon Boy FWA Platinum comes in a boxing wrap that can be hanged on the wall, with transparent opening, showing partially the airbrush. It is dark-ish in appearance, accenting on the airbrush itself, which is really nicely crafted tool. On the front there is limited amount of info, while on the back there is a more thorough description of the Mr.Hobby PS-270 in Japanese. 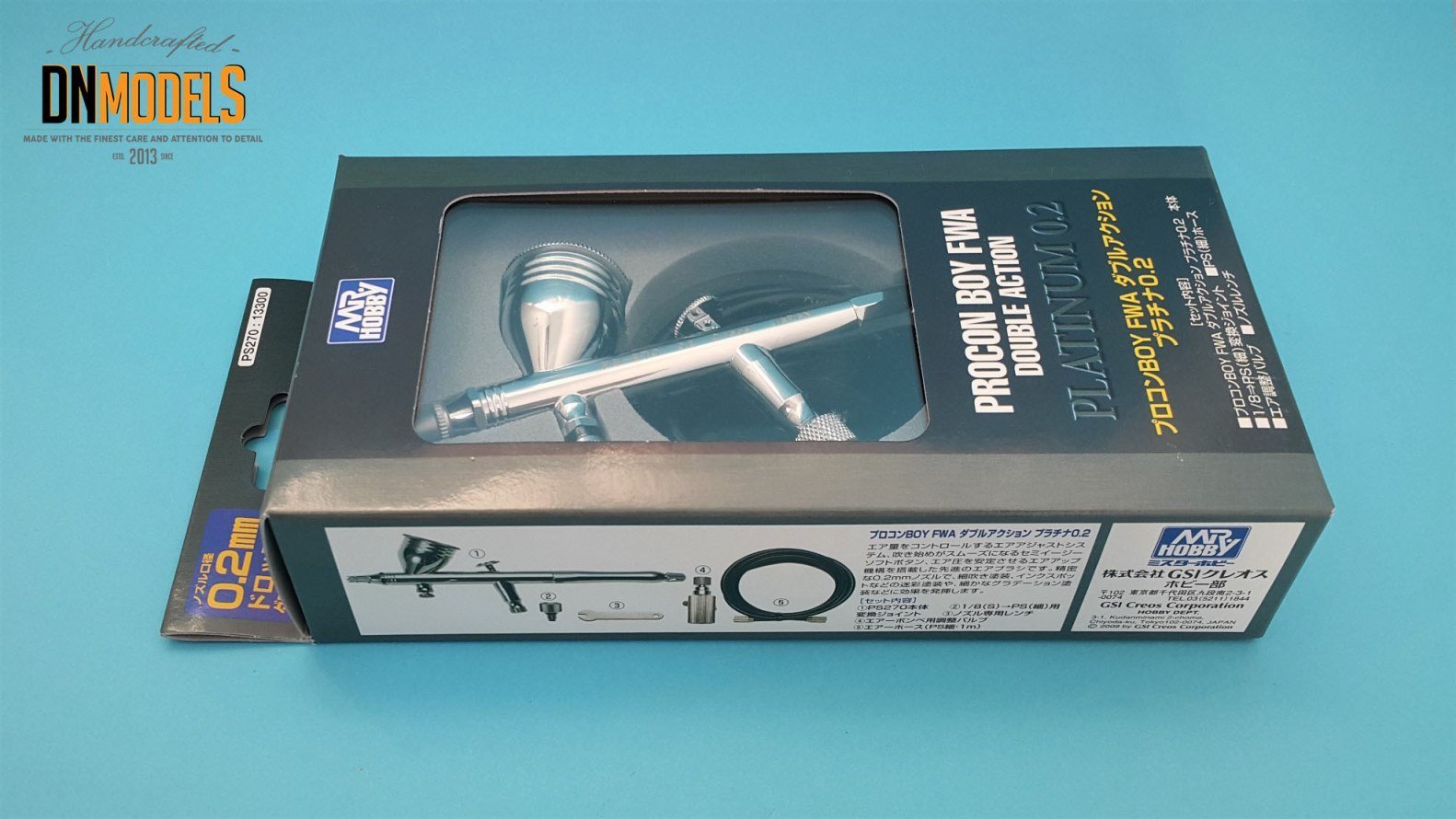 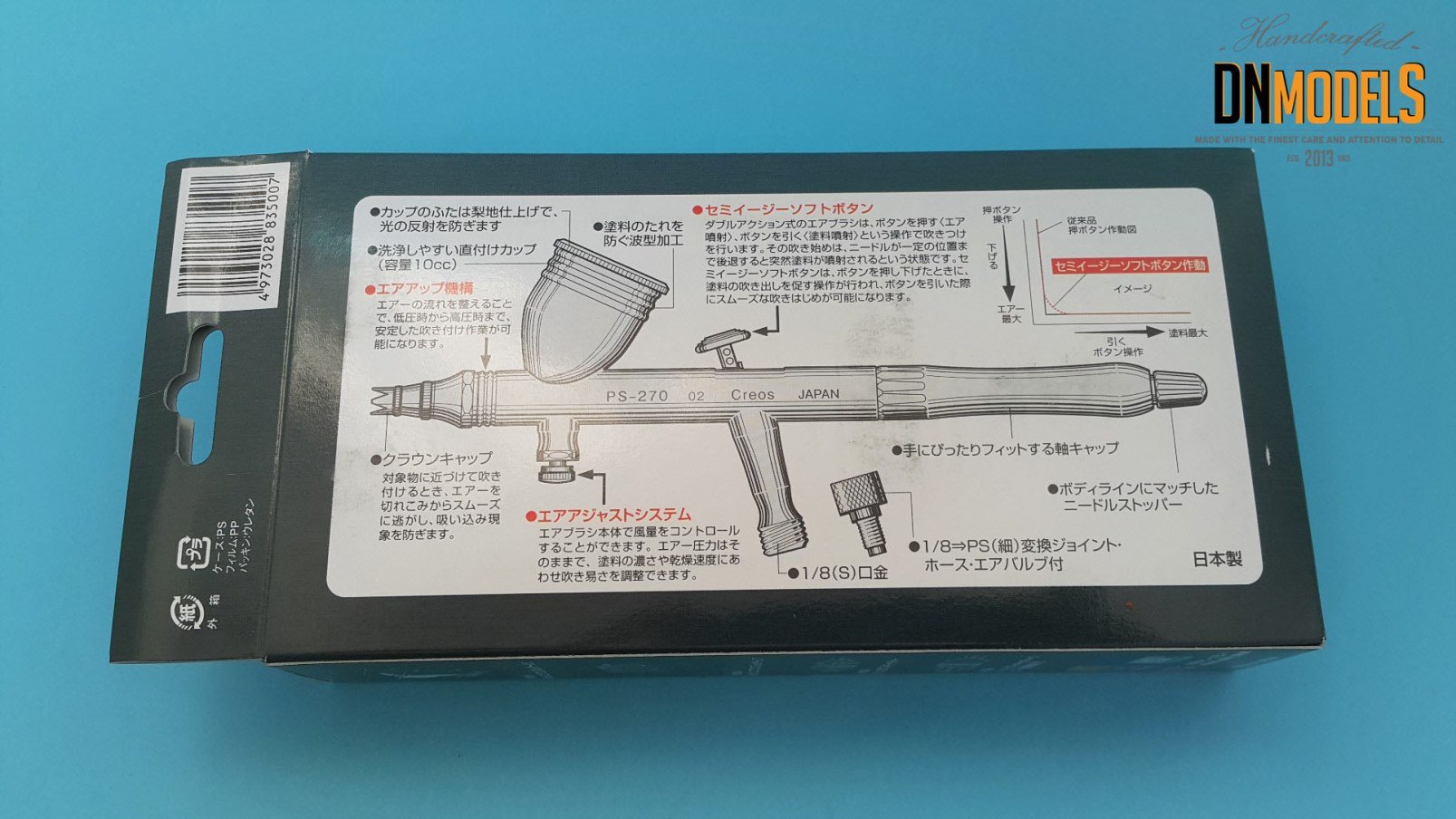 Inside, we have a plastic case, full with foaming material, shaped in a form of the Mr.Hobby PS-270. In general, the appearance of the case is not so high as with H&S and Iwata, but let that not fool you. The airbrush is a top notch tool.

The set features a hose, Mr.Air /can/ connection and the proper fitting to connect it to it on the airbrush foot. It still keeps the standard 1/8 on the airbrush and that is achieved through a fitting conversion. The hose is with smaller fitting /both sides/ though – the one that corresponds to the air can application. Something that is most definitely a bad idea for experienced modellers. 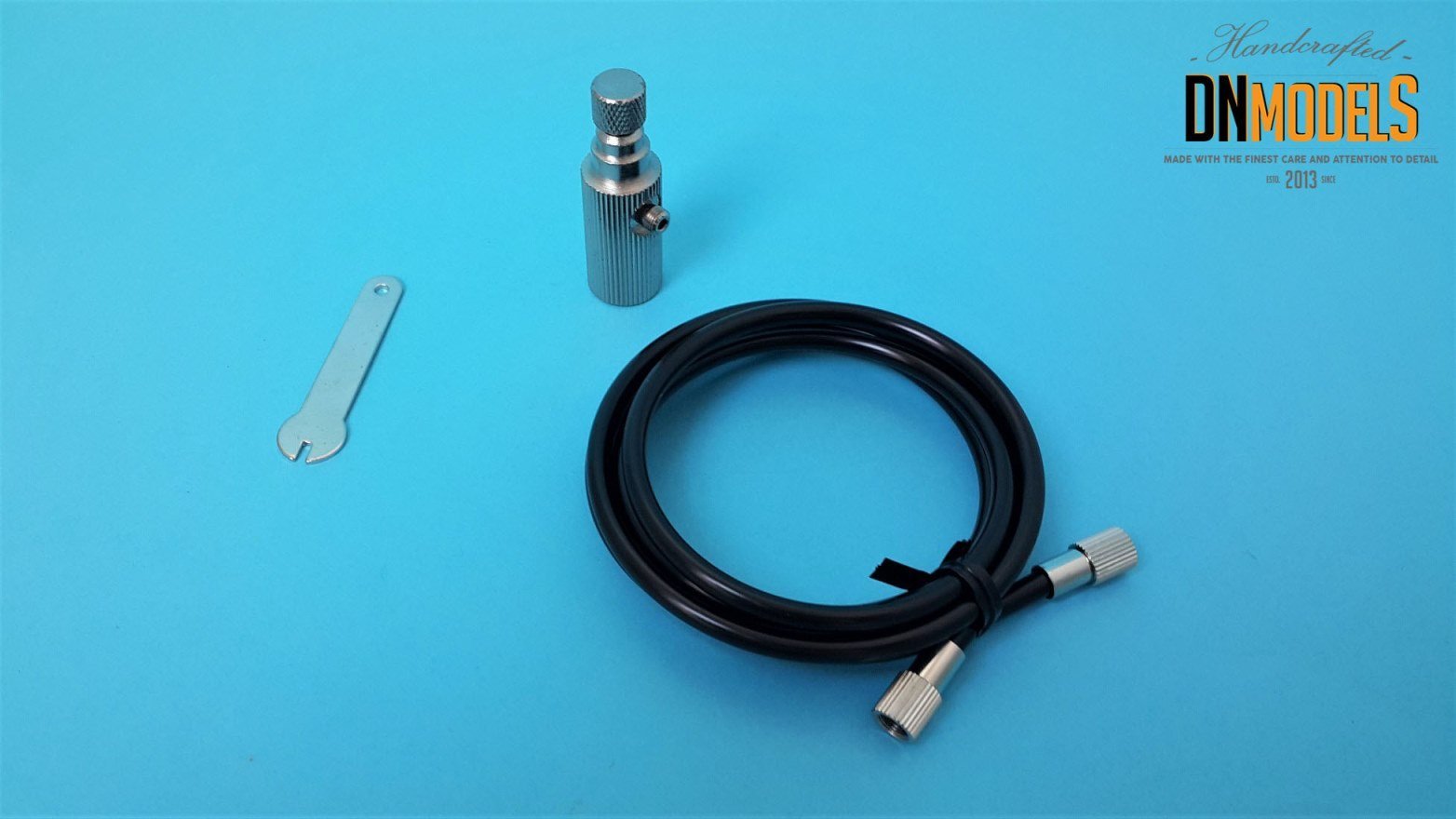 There is also a wrench for the nozzle, cover from translucent and flexible rubber for the front end of the airbrush, tail stopper, crown cap, two sets of instruction sheets and a cap cover.

Unlike on most airbrushes, instruction here deserve a bit more attention. There are two sheets, one being the standard information, including specifications, parts dissection, suggestions, setting up, cutaway and the regular info for anybody who might be a first timer with this airbrush.

Fortunately, that is partially in English, but I would assume that if you bought airbrush like Mr.Hobby PS-270, you already know your way around airbrushing. Thus, Japanese explanations would be self-explanatory with the help of the pictures. 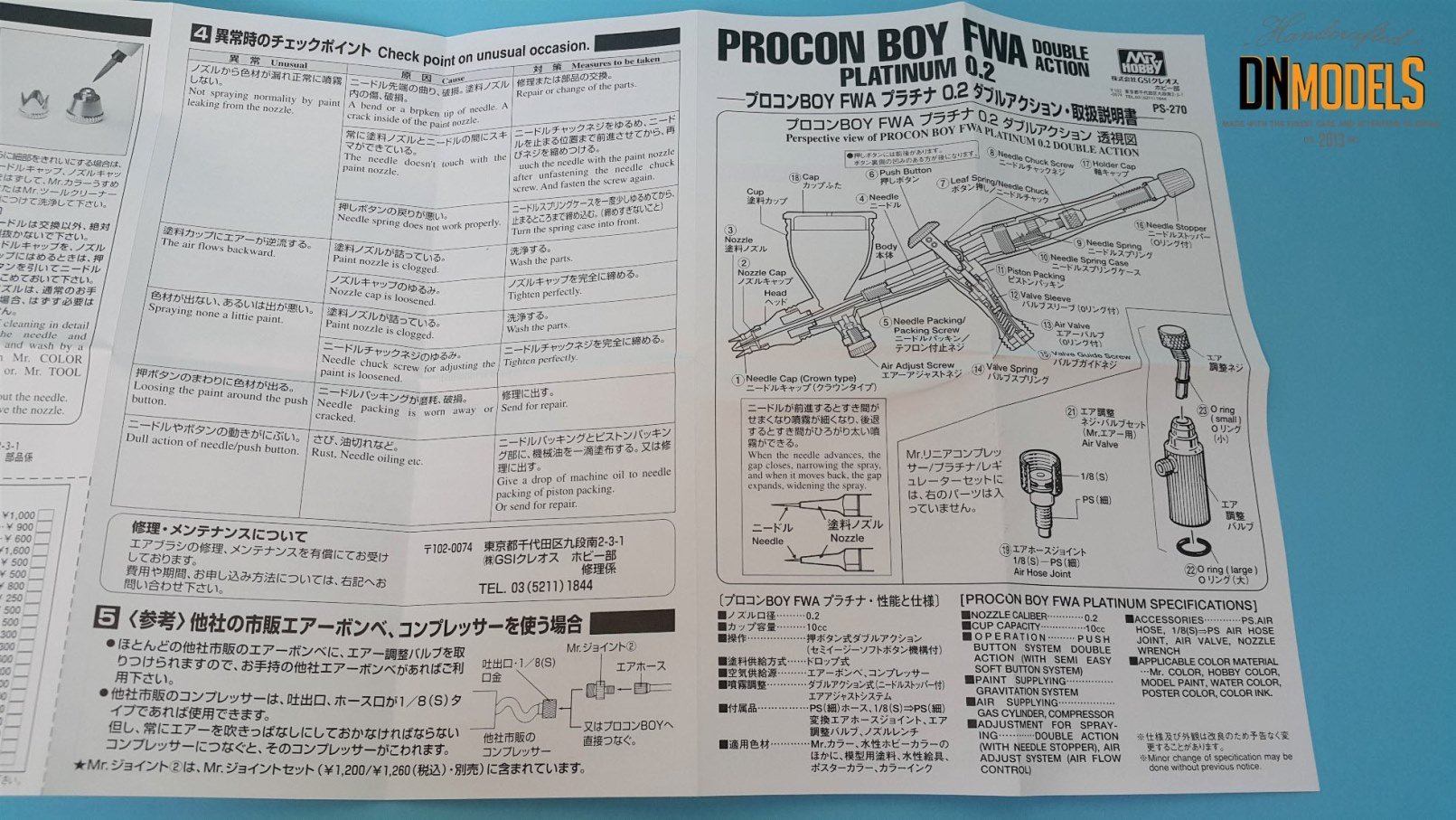 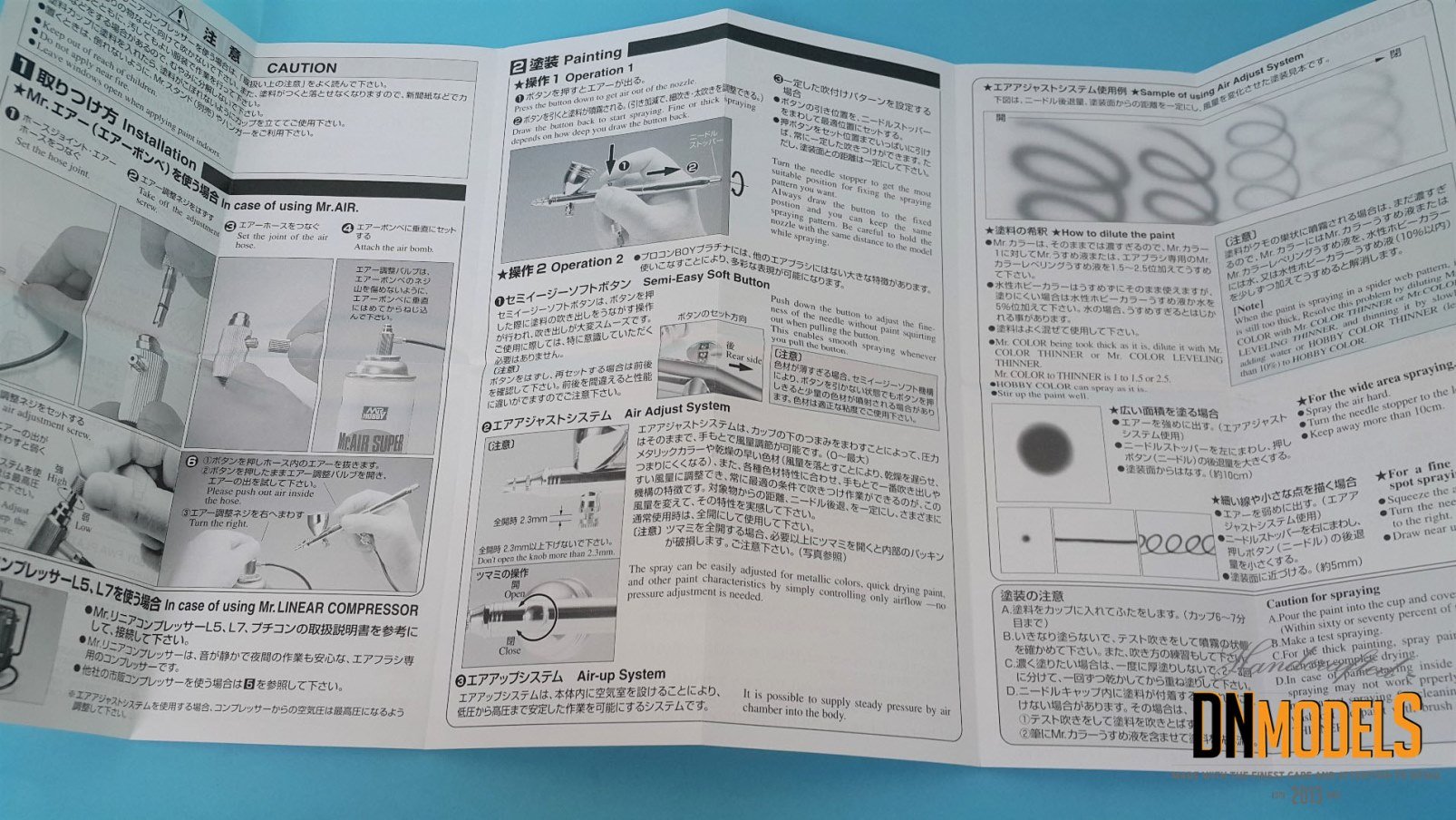 Which is the case with the second info-sheet. Here, everything is in Japanese. So you either rely on pictures solely, or you will have to use clever phone app that translates everything you point it at. That is, if you want to read it thoroughly of course.

The second sheet is very nicely done, featuring a drawings of a boy that get himself through airbrushing, experiencing different scenarios which are explained and the new owner is being guided properly. This comic like story book might be amusing at first glance, but in reality is very useful. Even with years of experience, I tend to read through stuff like that every once in a while when I am in doubt. 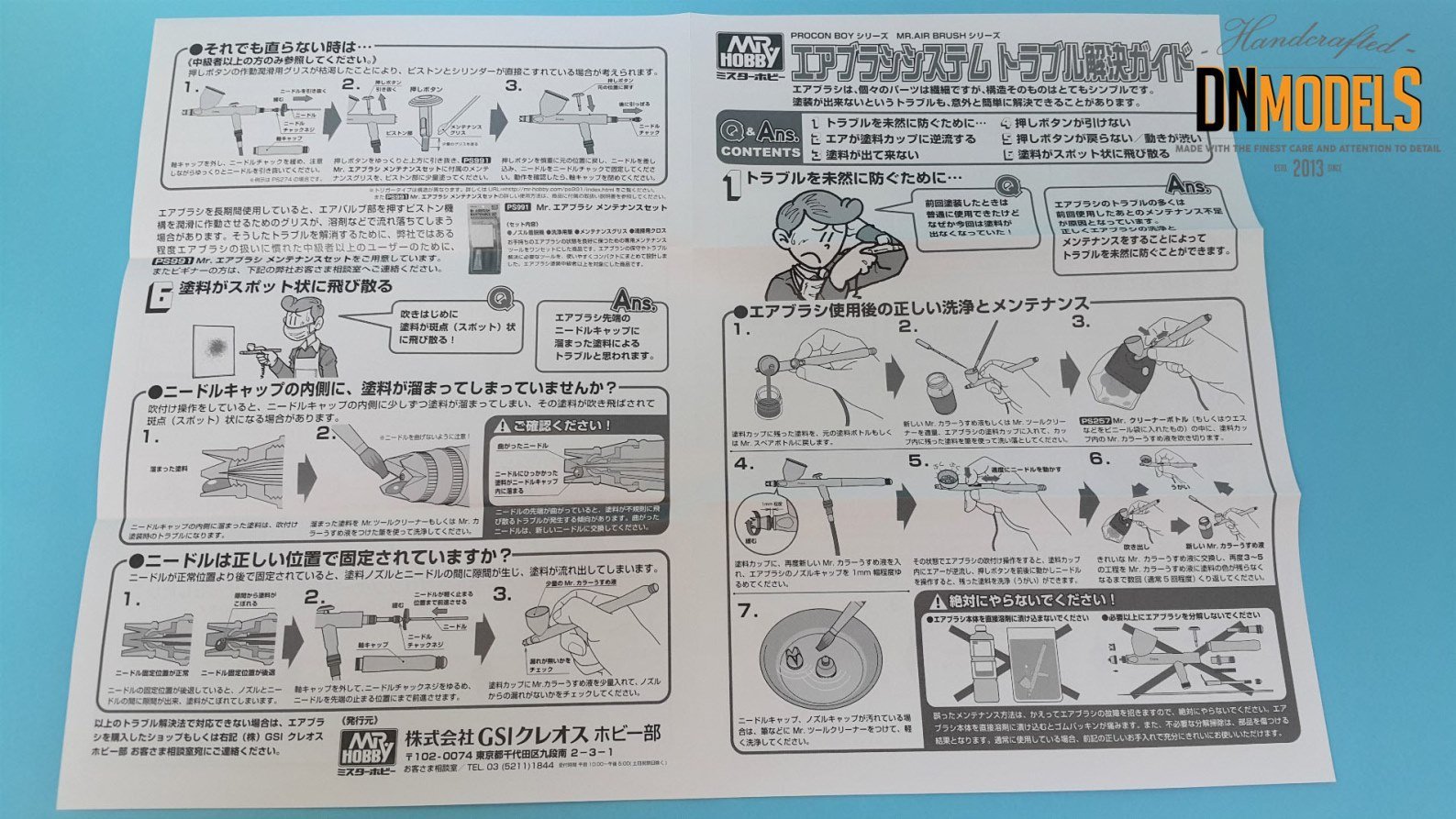 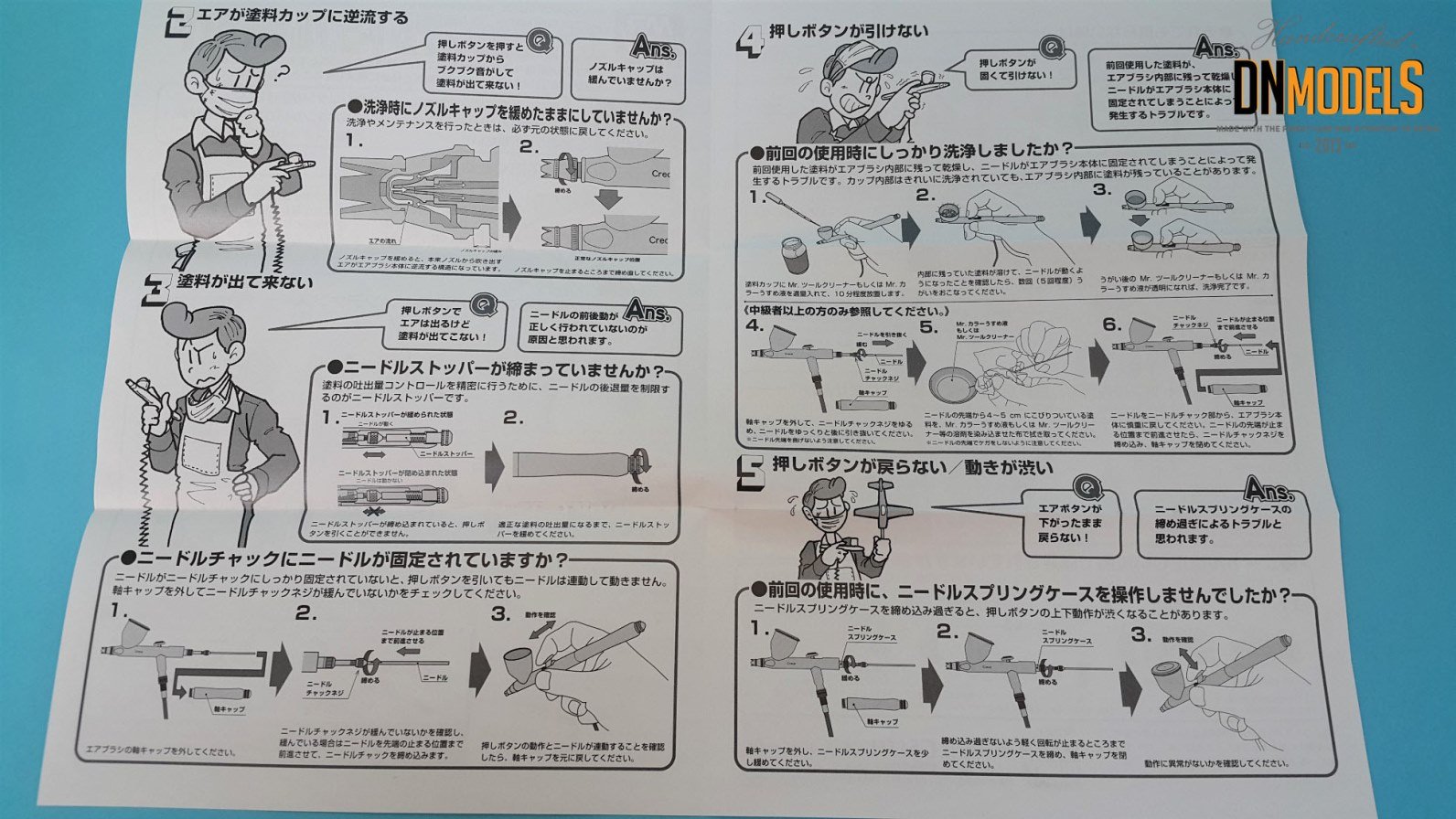 PS-270 Platinum itself is a piece of art airbrush. The foot of the airbrush is tilted backwards, while the rear-end needle cover with the tail stopper is shaped neatly and that creates very fine appearance in general. Trigger features visible holes in its root, paint cup is braided at its top and all that, added to the clean and shiny look of the metal gives one very posh appearance.

PS-270 Procon Boy FWA features 10ml cup, just enough for most of the scale modelling applications out there. For the nozzle of .2mm it might be even more than needed. The air regulation valve on the bottom of the airbrush adds to the precision, and puts that airbrush in the higher-end of tools used in our hobby. 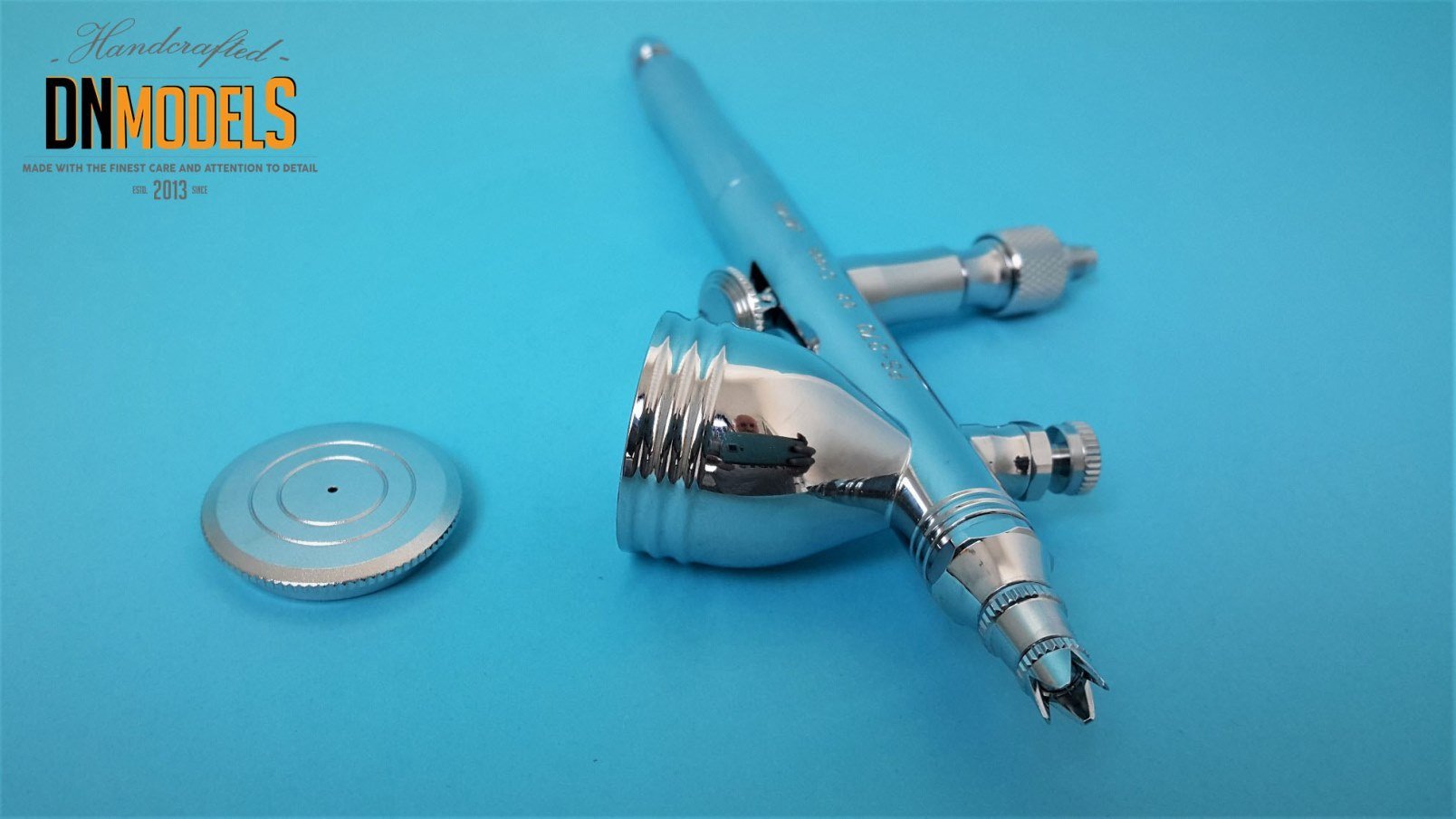 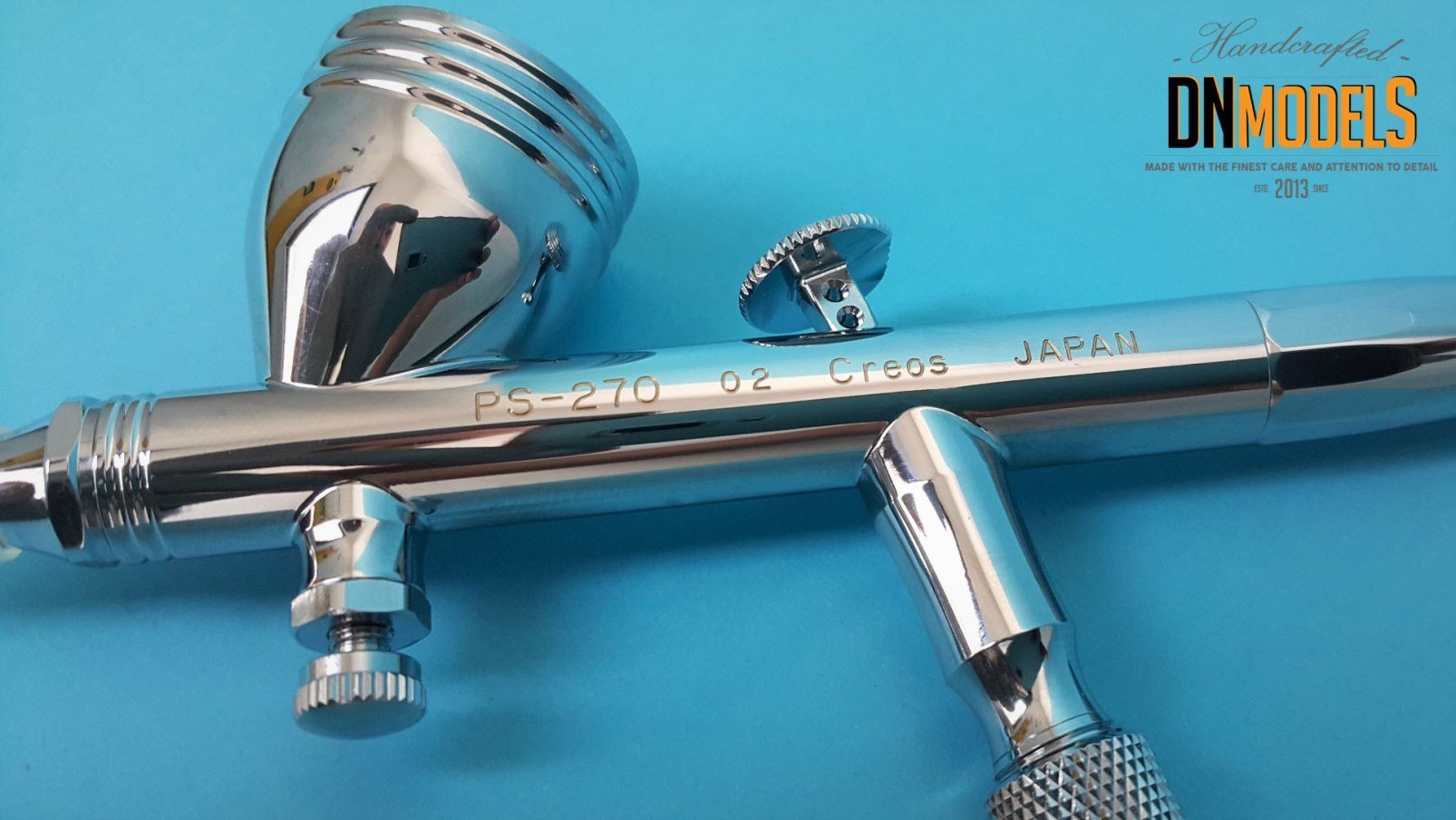 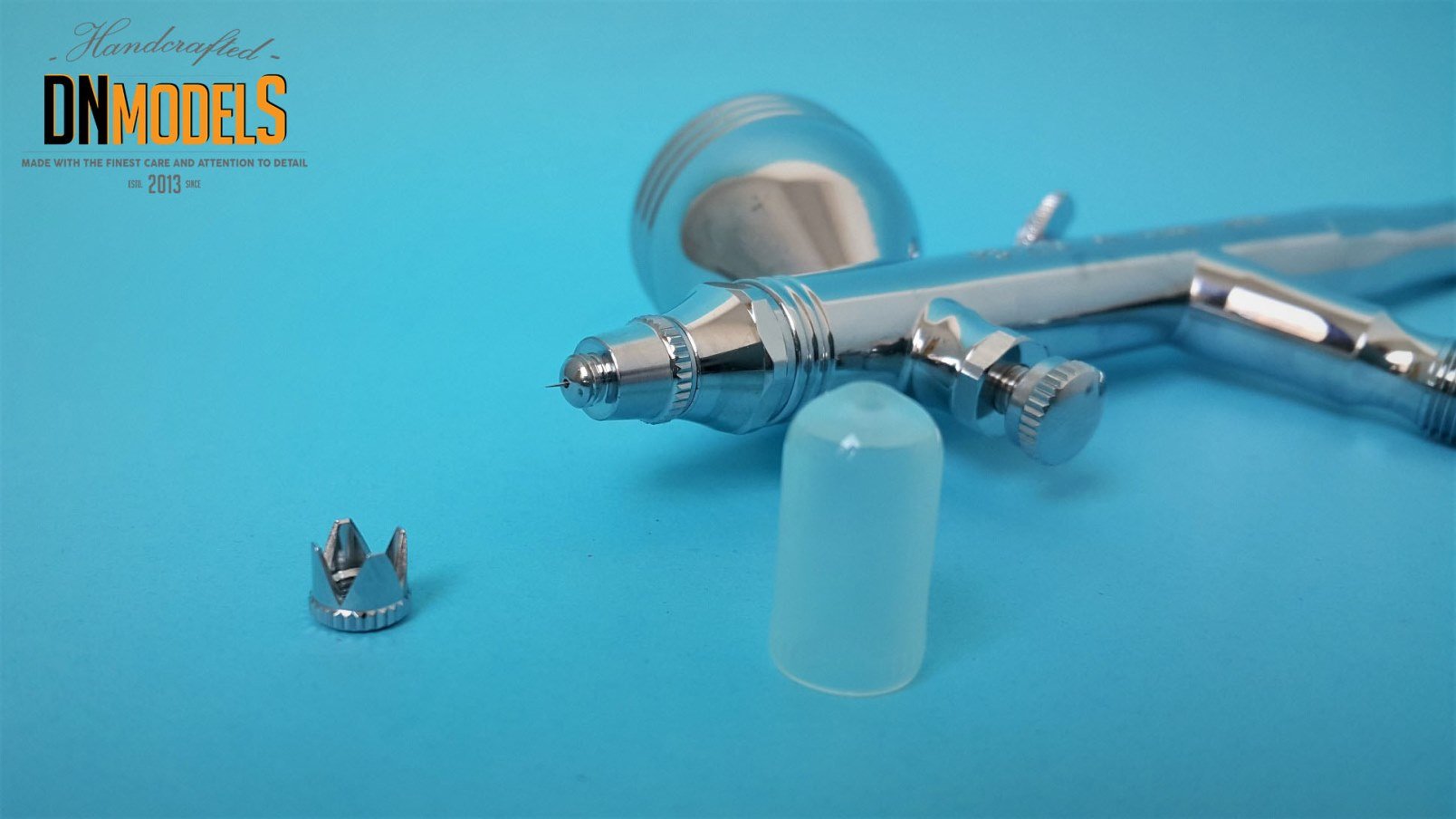 The crown cap is the only needle cap in the set, which is pretty self-explanatory – this is /again/ a high-precision tool. The crown allows for the air to leave without disturbing the airflow additionally. Very useful for close and fine painting, especially with mottling and fine lines, typical for WWII German armour and aircraft.

The tail stopper works very smoothly and even though I still haven’t tested the Mr.Hobby PS-270 Platinum excessively, I know for a fact that Mr.Hobby airbrushes are reliable and sturdy tools that will get you through the years. After all, this is Japanese made airbrush, with the corresponding quality expected from it. 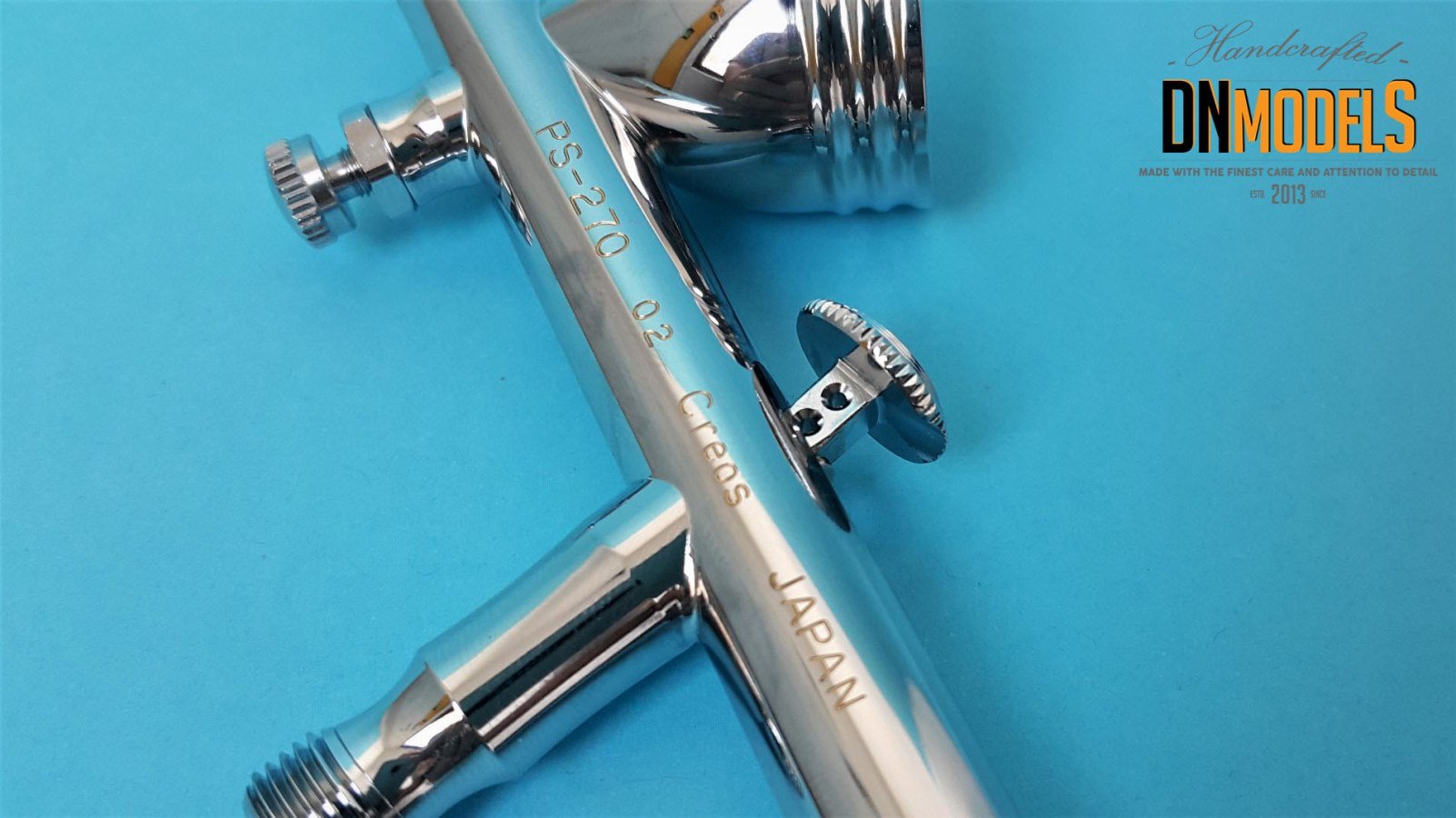 It is comfortable. Actually, it is very very comfortable. While with H&S the trigger is too soft for my taste, Iwata is a bit on the other end – the Mr.Hobby PS-270 Platinum FWA is just in the middle. The round top of the trigger is not demanding as with triggers that show cutaway on one of their ends. The pressure needed is very acceptable and even though for me is perfect, for some it might be a bit off. That is just a possibility which is not very probable though.

The tilted foot of the main body helps the grip, especially if you put an air filter just after it. It almost becomes a trigger-action-like. No handle of course. 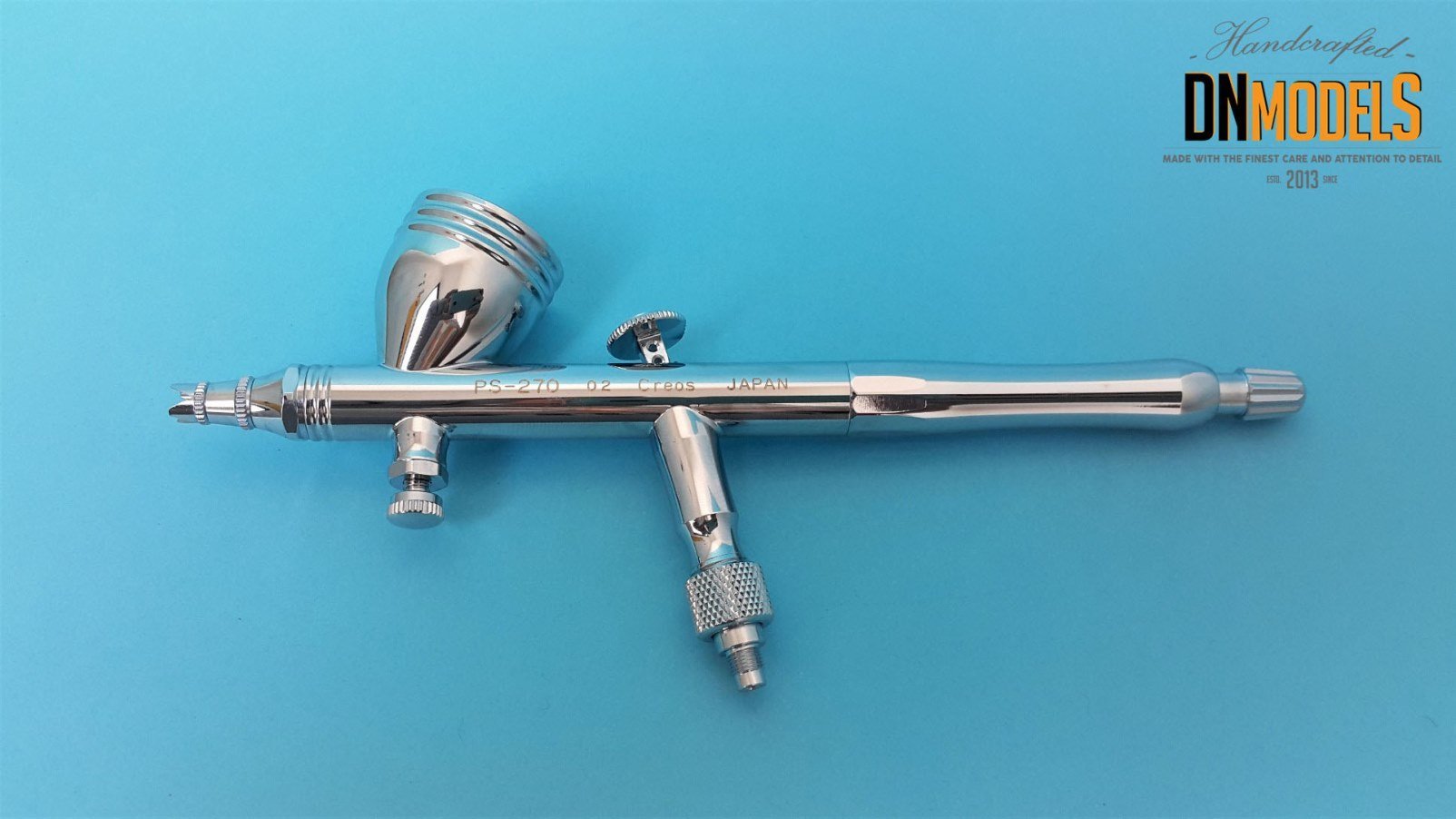 Pointy business end of PS-270 Procon Boy FWA is somewhat guide for your hand, which I found to be very useful. At first, I thought that it is a bit ugly. I though: “This ant-eater of an airbrush is odd”. But then I remembered that Olympos Micron – considered one of the best, if not the-best in the business had that same feature.

It actually helps. Visually mostly and maybe not with a lot, but still. Once you get used to that, it will stick.

The cleaning process of the PS-270 Platinum is the same as with every other airbrush. It is clearly depicted in the instructions too. I tend to deviate a bit, always flushing two or more cups of cleaner through it with high pressure. More often than not, using harsh and aggressive cleaners too. Especially when cleaning after metallic paints.

No troubles with that what so ever. For the seals and the needle, I would advise to consider your availability if you choose to get Mr.Hobby: if in your area there are available, it’s great. You need nothing more than the airbrush package. If not, I would suggest to get couple of spare parts, just in case. After all Mr.Hobby PS-270 is with .2mm needle/nozzle combo and that is rather demanding. No matter the brand.

As for availability, it is not that popular as Iwata, but still can be found and is widely-enough used tool. That was my main concern at first, but after a short research I found out that it is with decent availability. 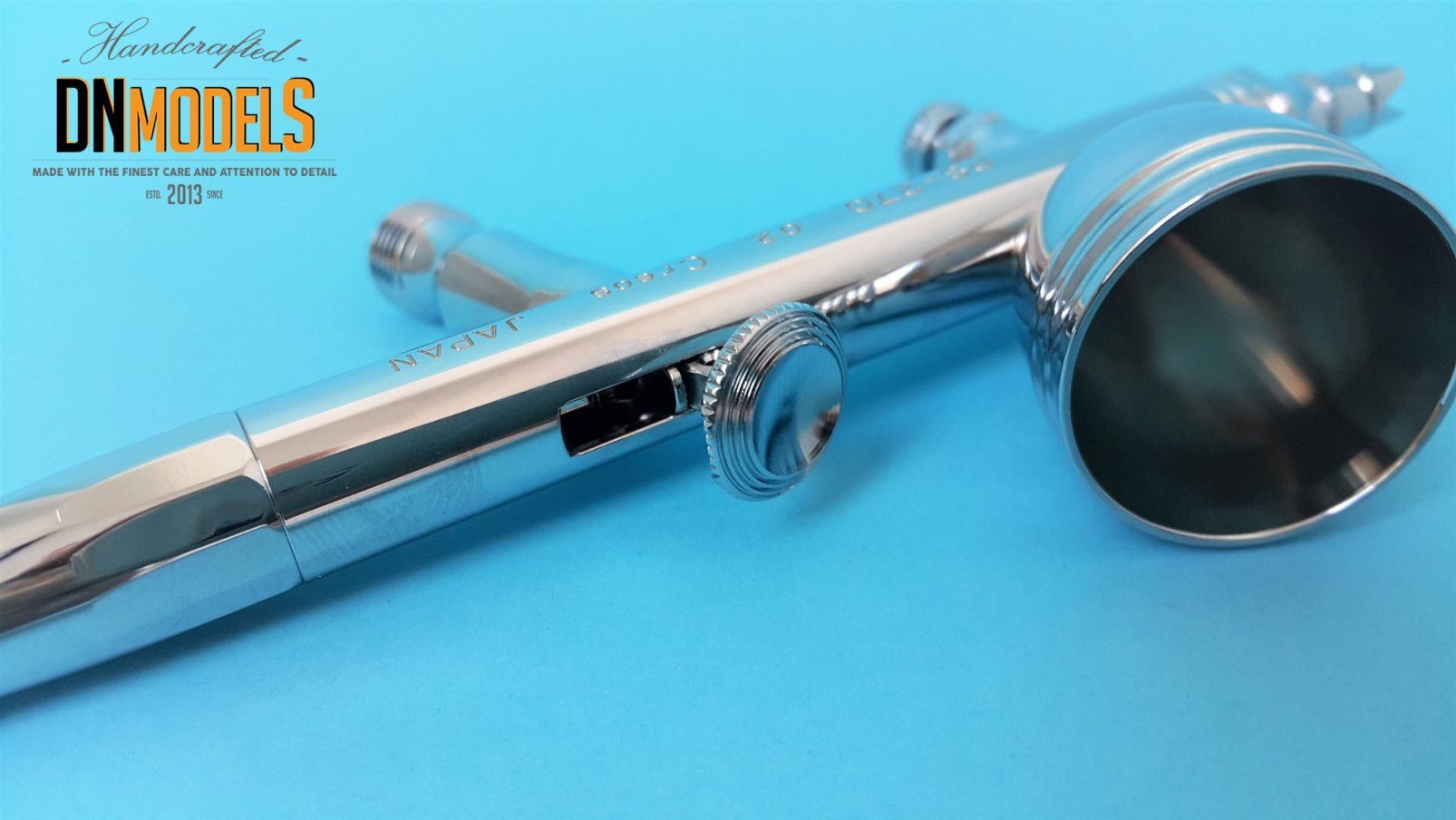 Now the answer to the important question mentioned above: “Do I get the cheapo or do I go for the overpriced but considered best in the business?” The answer is: “Neither.”

You can simply get the PS-270 Procon Boy FWA Platinum. And yes, it is that good. More than what is said above.

Mr.Hobby might not be famous with their airbrushes as Sparmax, H&S, Badger, Iwata and Paasche, but oh boy are they competitive! That rather inexpensive tool works better than HP-C+ that I am used to and most definitely can compete with Evolution FPS and Infinity by H&S. Latter ones always being a bit troublemakers for me with their feather-light triggers.

Procon Boy FWA PS-270 sprays equally fine, it also has a crown cap and the only controversial that I saw was the fact that Mr.Hobby provided the option for can air supply attachment. For that quality this is unacceptable. PS-270 Platinum is eons away from that kind of a work habits. 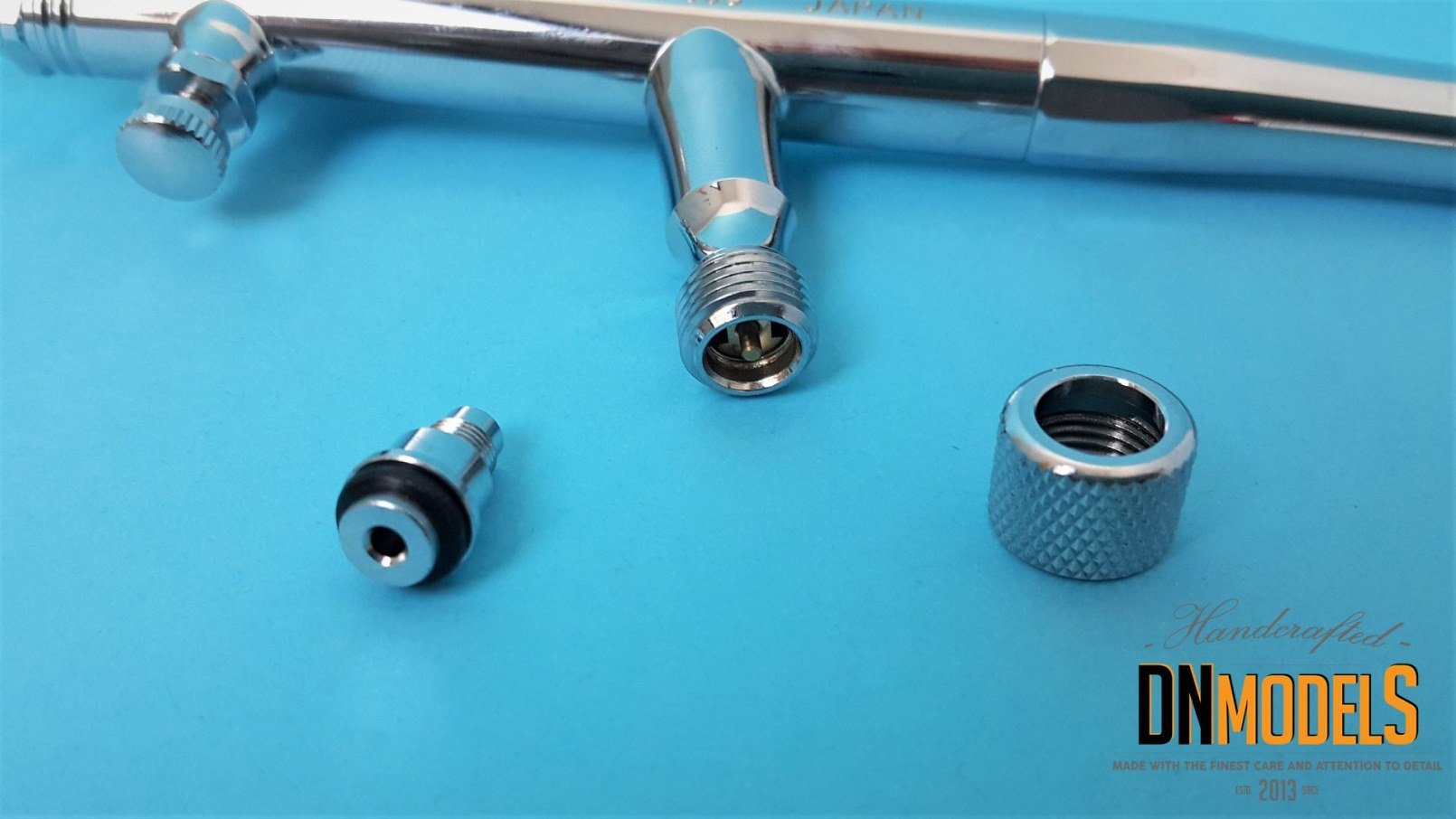 Definitely worth the investment if you want to step-up. And by stepping up I mean my experience too, going from HP-C+ as a main gun, which is not bad at all. Here everything is a bit more refined. More ergonomic, more delicate.

The visual resemblance with Olympos airbrushes at the front end is somehow justified by the performance and that puts Mr.Hobby in the same class as the most precise and expensive airbrushes out there. 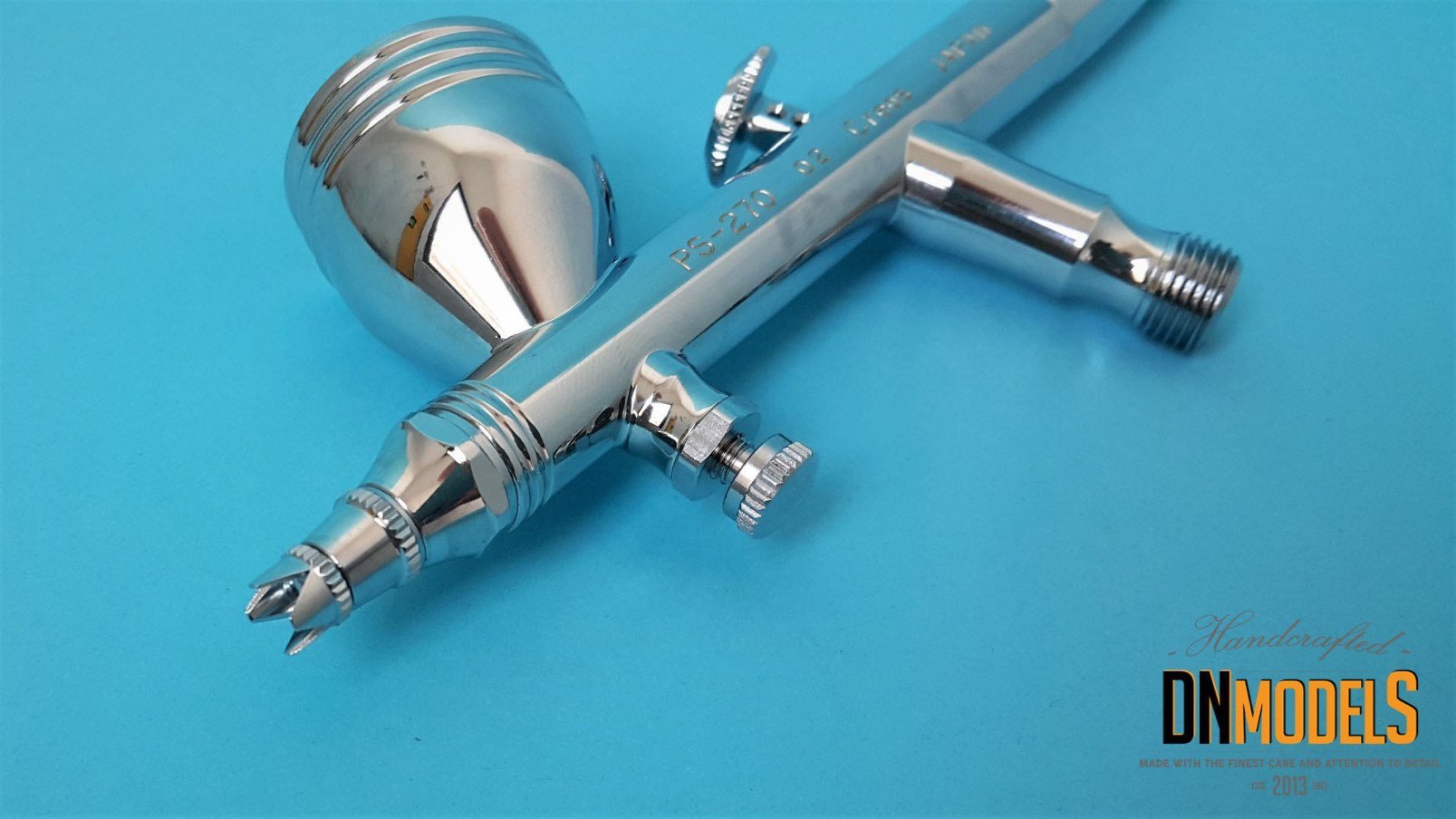 There is better tools available, but for that price I think this is the spot on investment. I never doubted Japanese quality and Mr.Hobby PS-270 is just another proof for that.

Be sure to check Mr.Hobby for their airbrush line, since PS-270 Platinum is not the only gun that deserves attention. They do have a lot to show for!

For a video review of PS-270 showing its capabilities while working, visit DN Models’ YouTube channel. Link is available at the top.