Tractors have always been fascinating. Tracked or wheeled, armored or agricultural. Since young age, almost everybody loves them. Is it because they are the workhorses in armed conflict or in peace time is not clear. However, we all adore them. In any of their variations. Back in a day, D9R from MENG was the hottest kit on the market. Although technically a dozer, not a tractor per se. Sturdy popularity was gained by Stalinetz from Trumpeter and later one with the very challenging D7 from MiniArt. Since then, a lot of new tractors appeared in 35th scale and there is still interest for more. 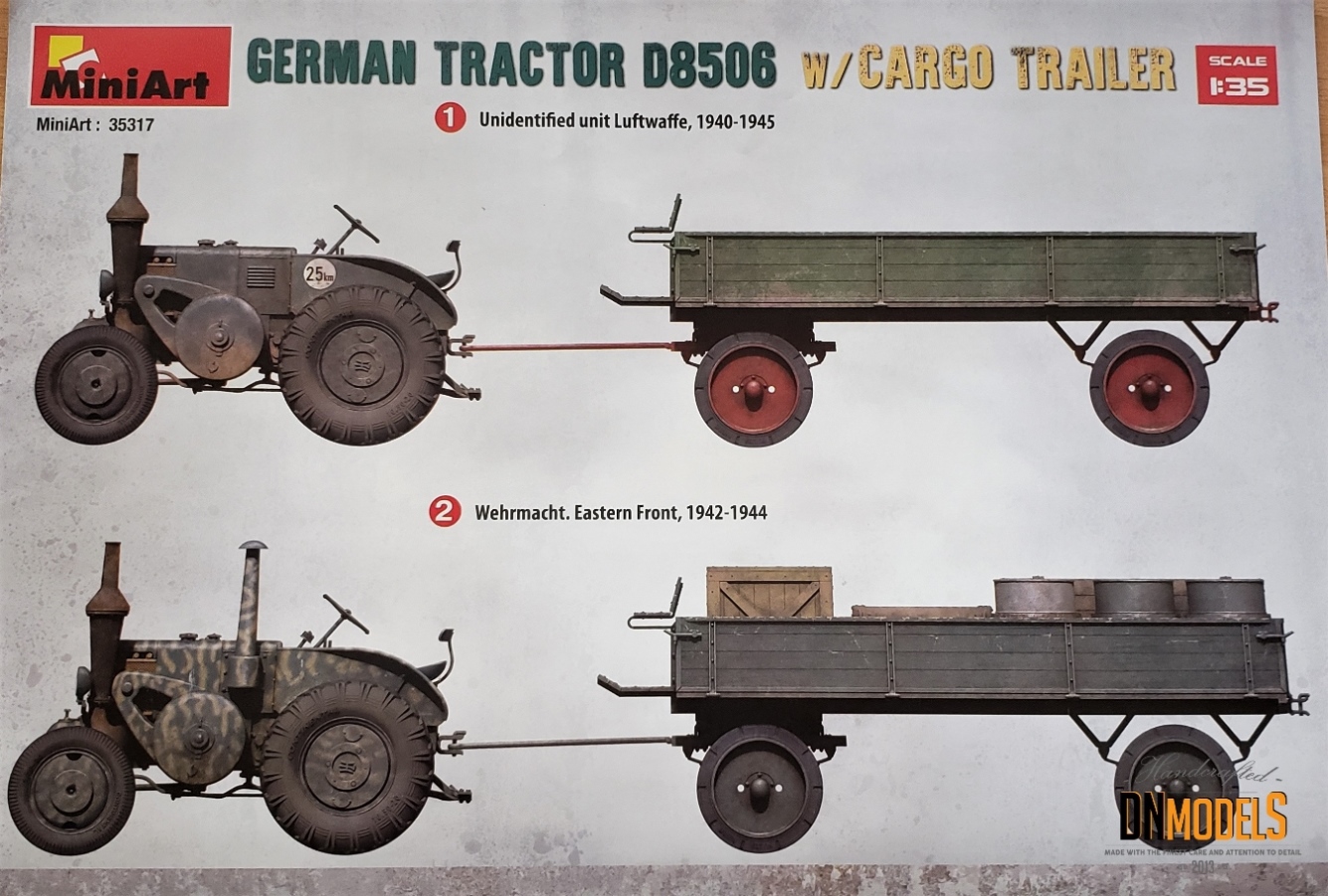 D8506 reviewed here was released in several options from MiniArt. This kit follows slightly different approach /more on that later/ than their D7 and is somewhat more competitive to Trumpeter’s Stalinetz tractor. The Ukrainian model maker offered one with standard wheels as well as one with steel ones. There are one with roof and one without as well. There are more variations in real life, including semi-tracked version of this vehicle, so it is most likely that we will see more. The real deal was produced from the mid-30s till the 50s and was used both in civil and armed variations. It was made by Lanz and up to this day is one of the most popular tractor classics in use.

MiniArt #35317 is one with Cargo Trailer and figurines in the set. This is visible from the boxart, which shows a German WWII crew on the Eastern Front /seen on the paint schemes later/ driving on a dirt road, obviously before or in between the famous Russian winters. Nice touch, since cuts off the harshness of the situation to some extent. 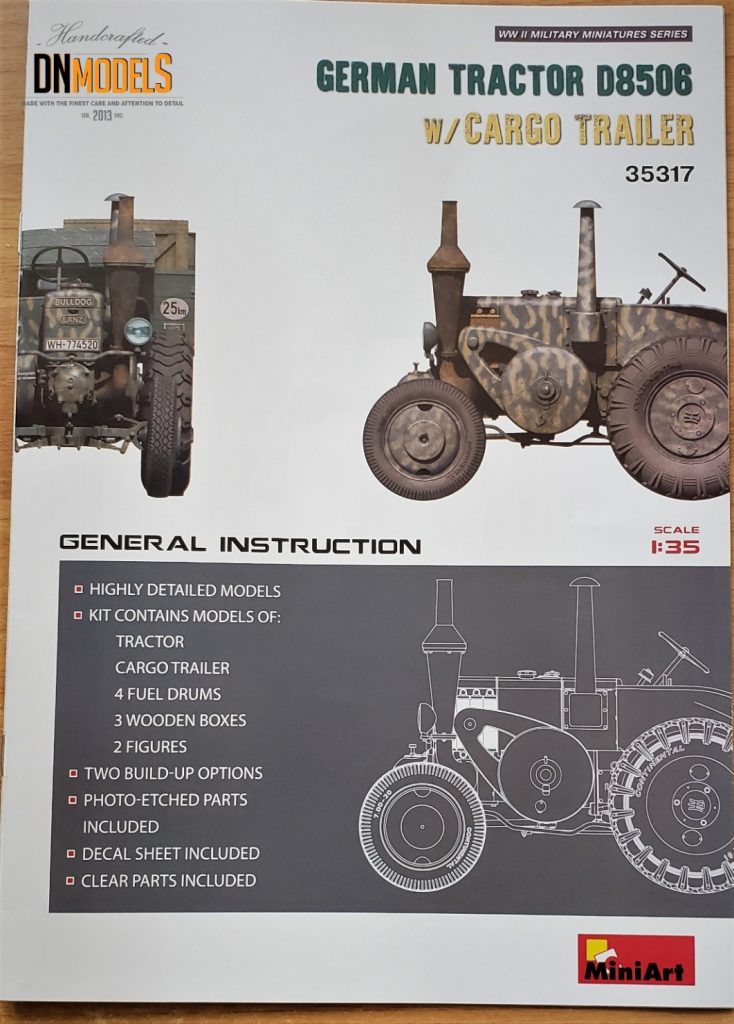 The box itself is standard MiniArt, although at first glance it seems a bit smaller than expected. Everything inside is packed nicely in a large transparent envelope, with the instructions on the bottom. There are plenty of parts, but this time they are not overly many, hence the compact box size. Not only that, but when one dig deeper into the instruction booklet, it quickly becomes clear that this kit in its complexity is a step down from the standard MiniArt.

The good news here are that this allows the kit to be used by wider range of modelers, including beginners and for some this might be suitable even as a first kit. This is the main difference with the D7 that MiniArt delivered a while ago. Latter one was a challenge even for the best out there. Instructions are nicely arranged, without much description in letter format, but are too – simple enough to be understood at first glance. 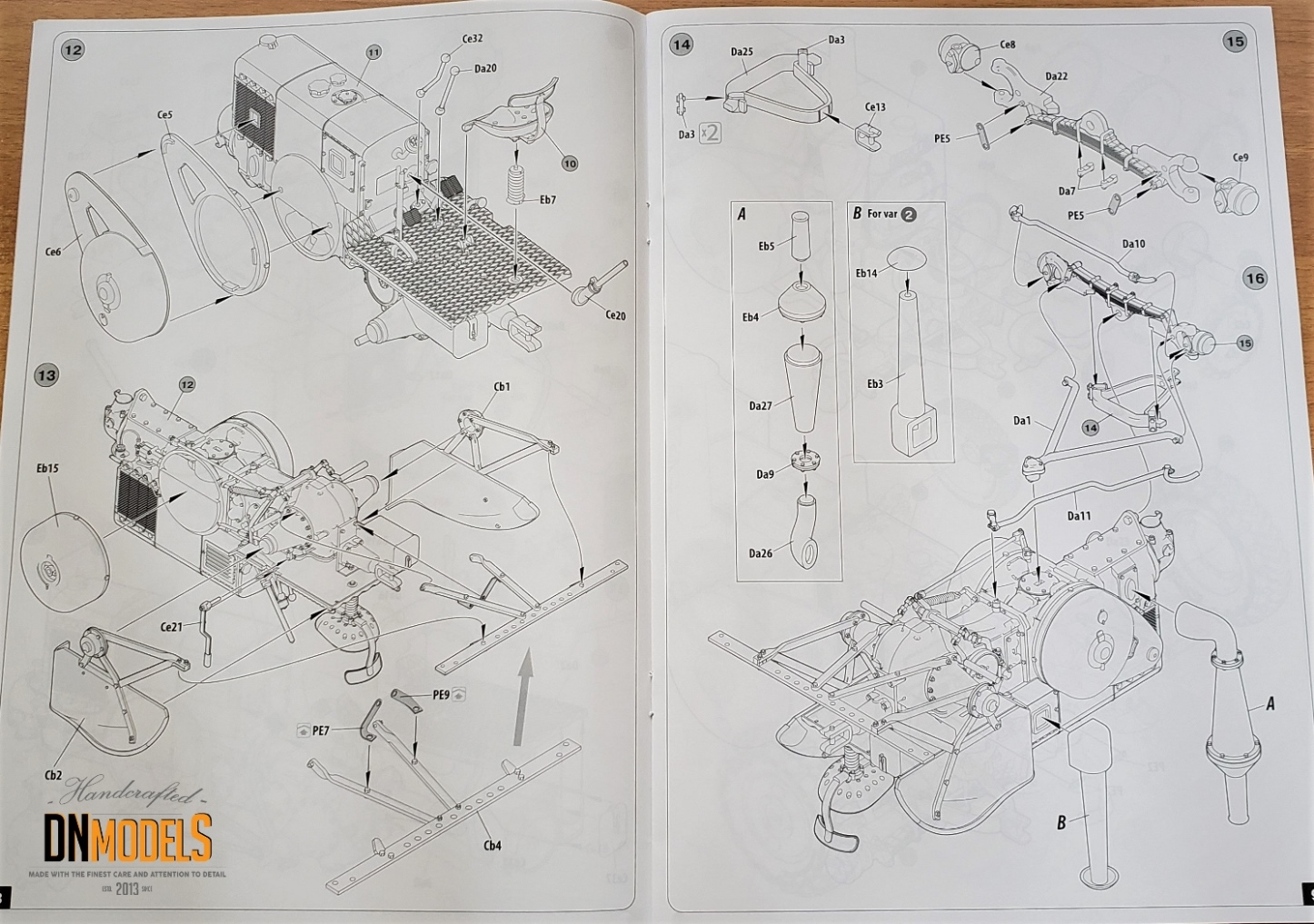 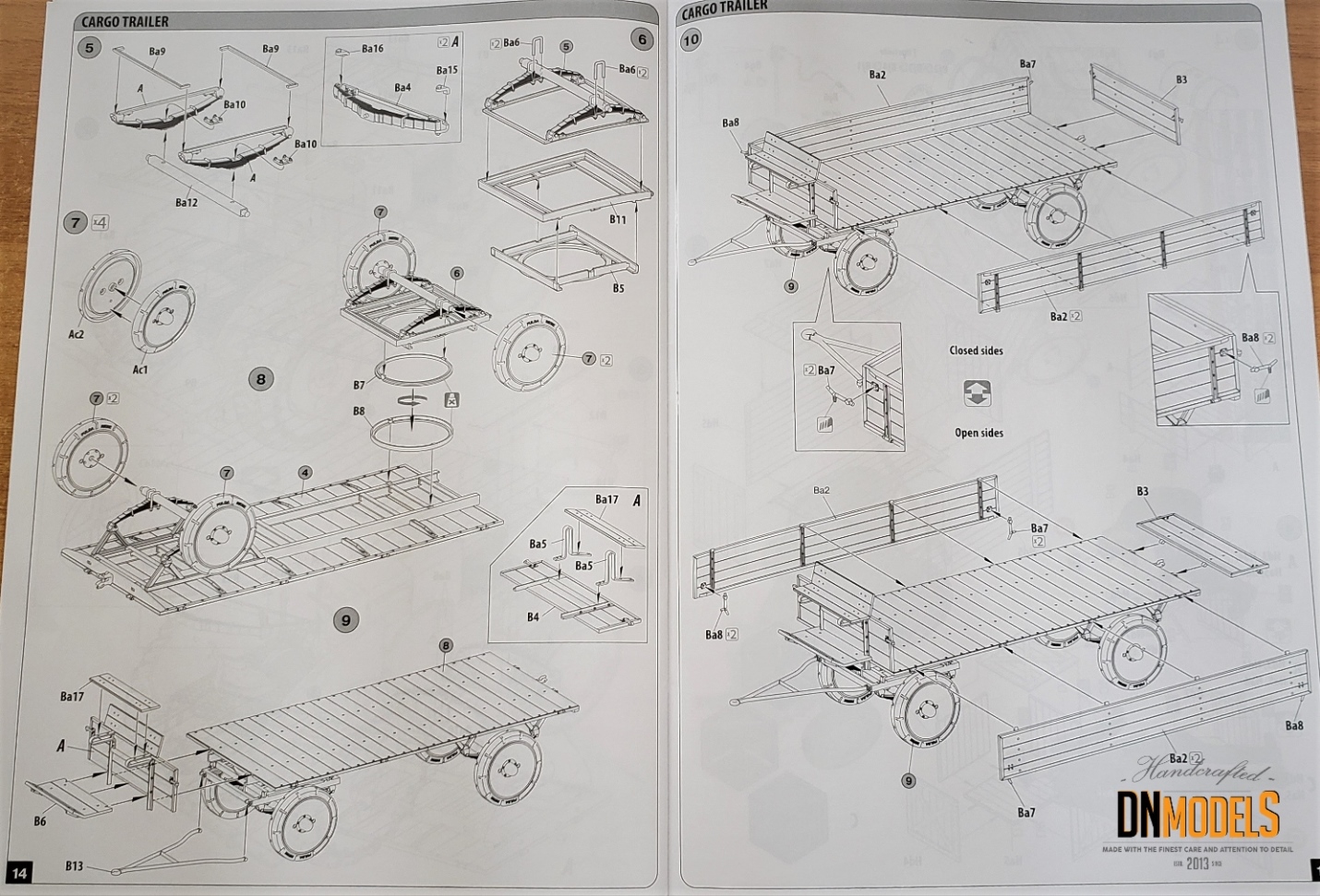 The chassis itself represents the most complex area of the build. This is tricky, since alignment is always an area that requires more attention, but again – it seems doable for almost everybody in the hobby. That is something that MiniArt do not deliver on a regular basis. Their usual kits are very-highly detailed and more profi-oriented. Again – good news here with this D8506 tractor.

There are figures included. German soldiers of course. Even though there are finer options on the market, MiniArt figures are still among the best in the business and this addition should be welcomed. They come with a decent amount of work embedded before you can get them to the level you want them to be, but this is inevitable with most of the options on the market. It is a job that is relatively hassle free and should come as no surprise to anybody, since doing tiny little people in 35th scale always takes its toll. 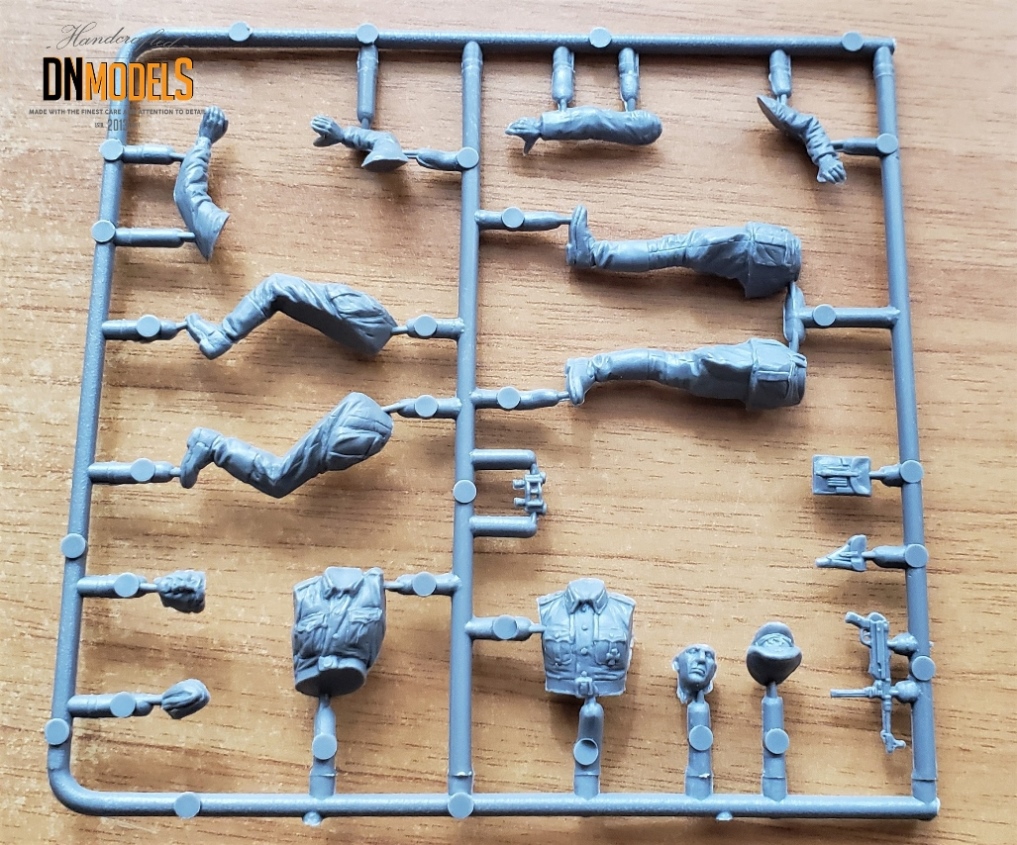 The PE, decals and clear parts are represented here by three small items, which is quite understandable. The vehicle itself is small and you can hardly find too much of photo-etch to add to a tractor. There are areas of course, but let’s remember that we already classified this kit as beginner-friendly, which excludes the use of too much photo etch by itself.

Clear parts represents lights and they are not very important when it comes down to a vehicle that lives its service life in the dirt. The decals are also limited and it is expected that if you do your job with the weathering properly, you will most likely hide large amount of their visibility. Of course, that doesn’t concerns their quality, – which is great – but makes them not-so-important items in this kit. 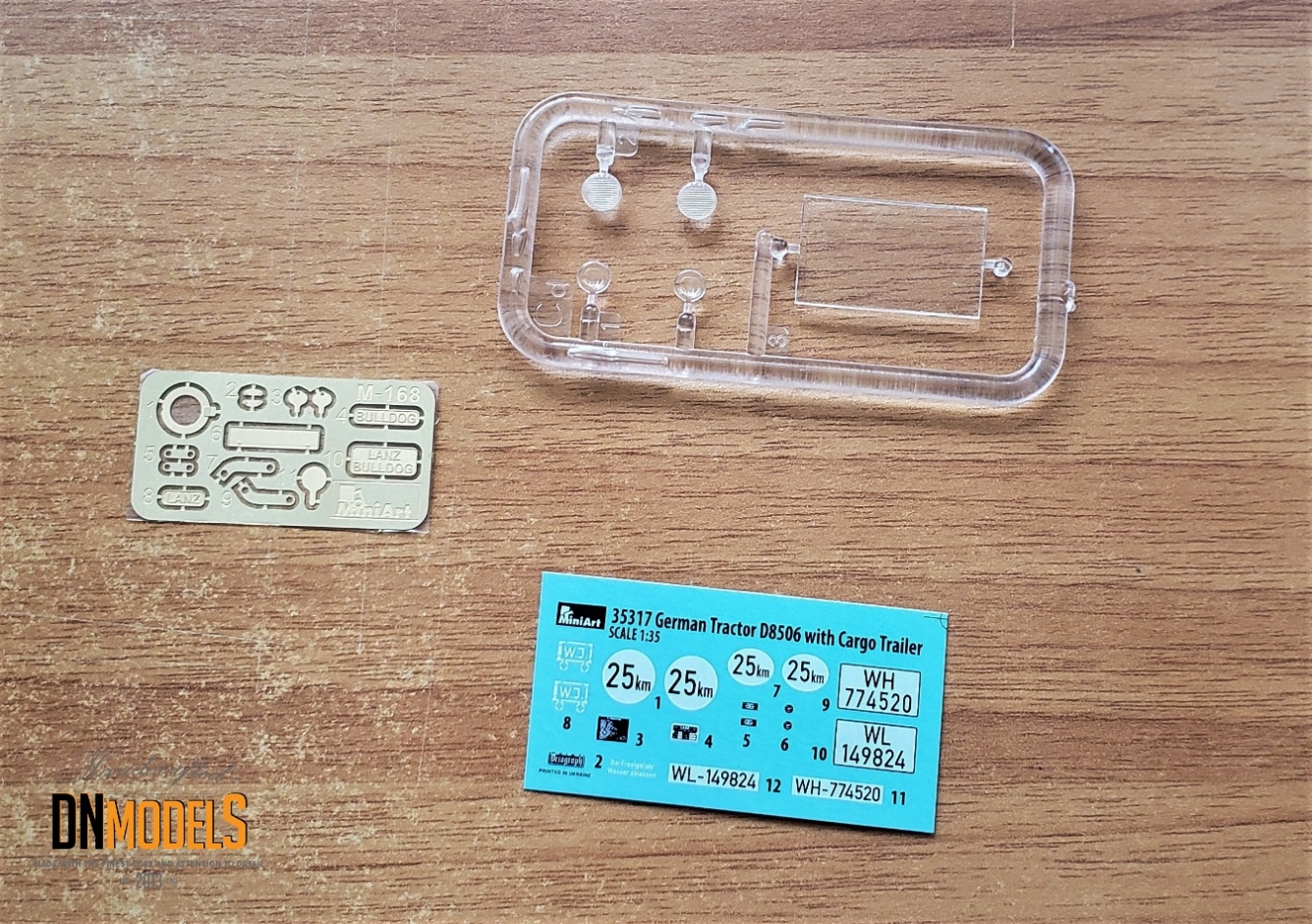 The plastic of the kit is represented here by the /already a standard/ good quality western-european product, medium grey in appearance and lacking the problems of the old-school MiniArt plastic. Back in a day, the old material was very fragile and that was awful experience, especially with the initial D7 Bulldozer kits. That is no longer a problem. MiniArt switched to this new material couple of years ago and they made the right choice, especially knowing the engineering that they embed in their products. 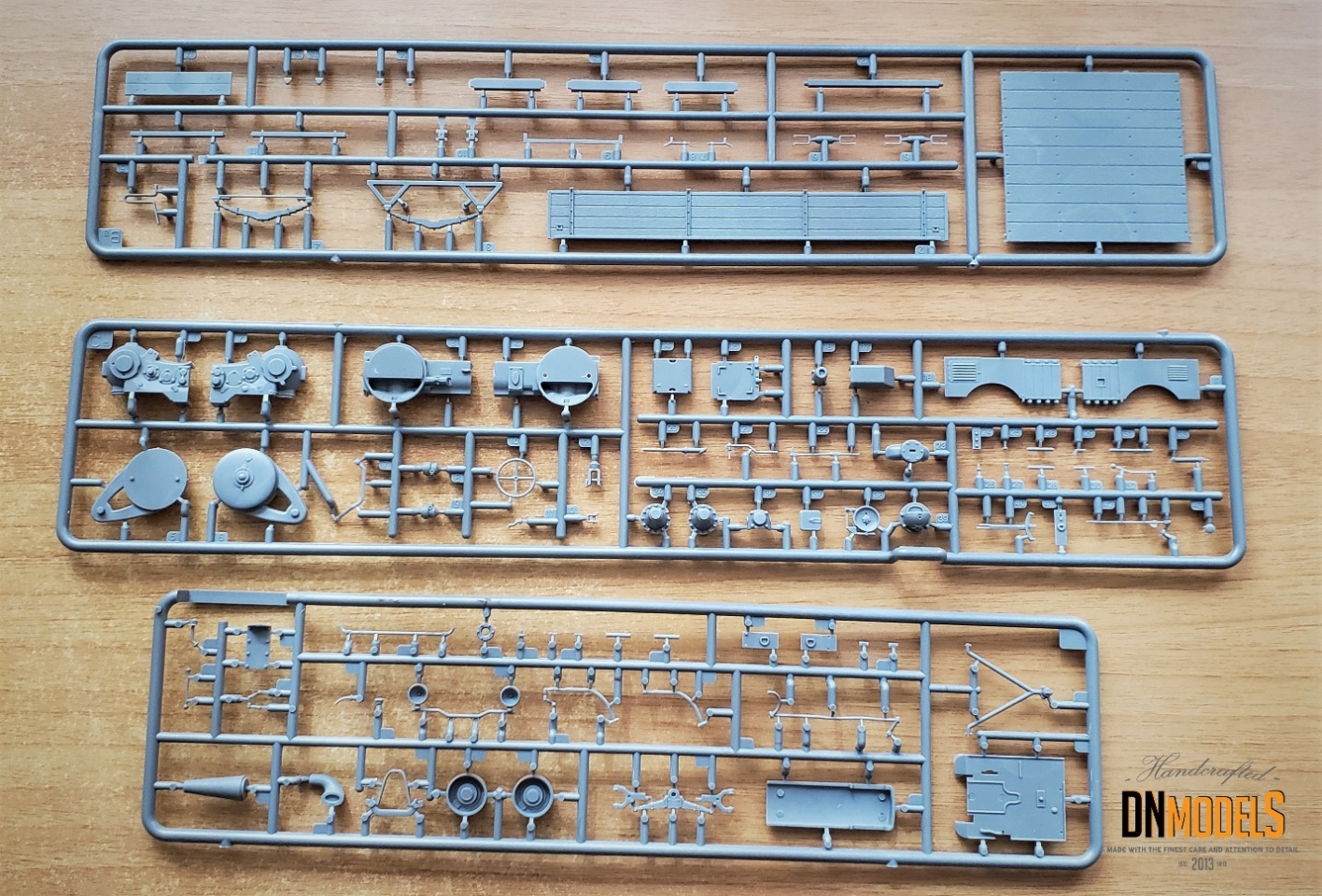 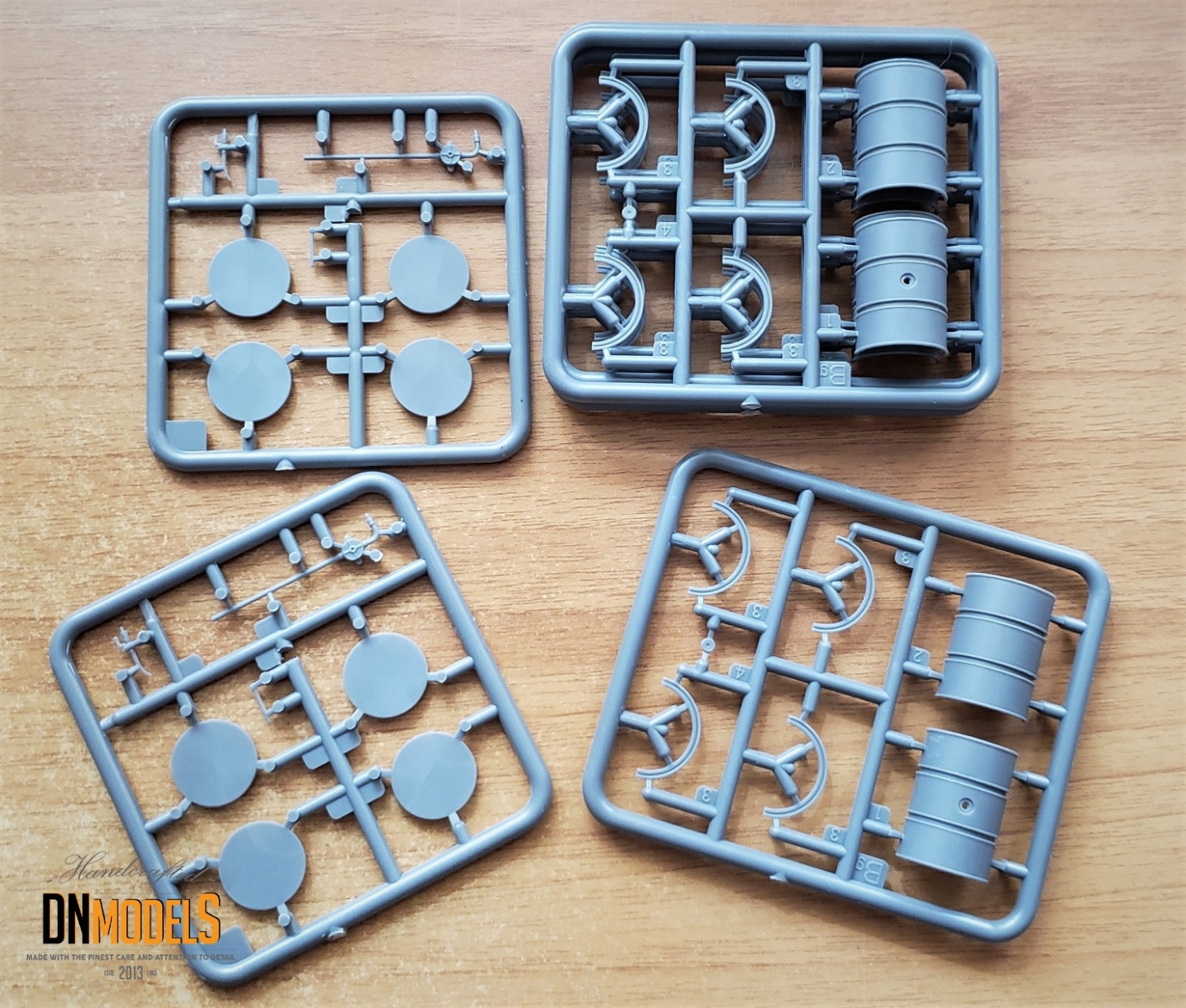 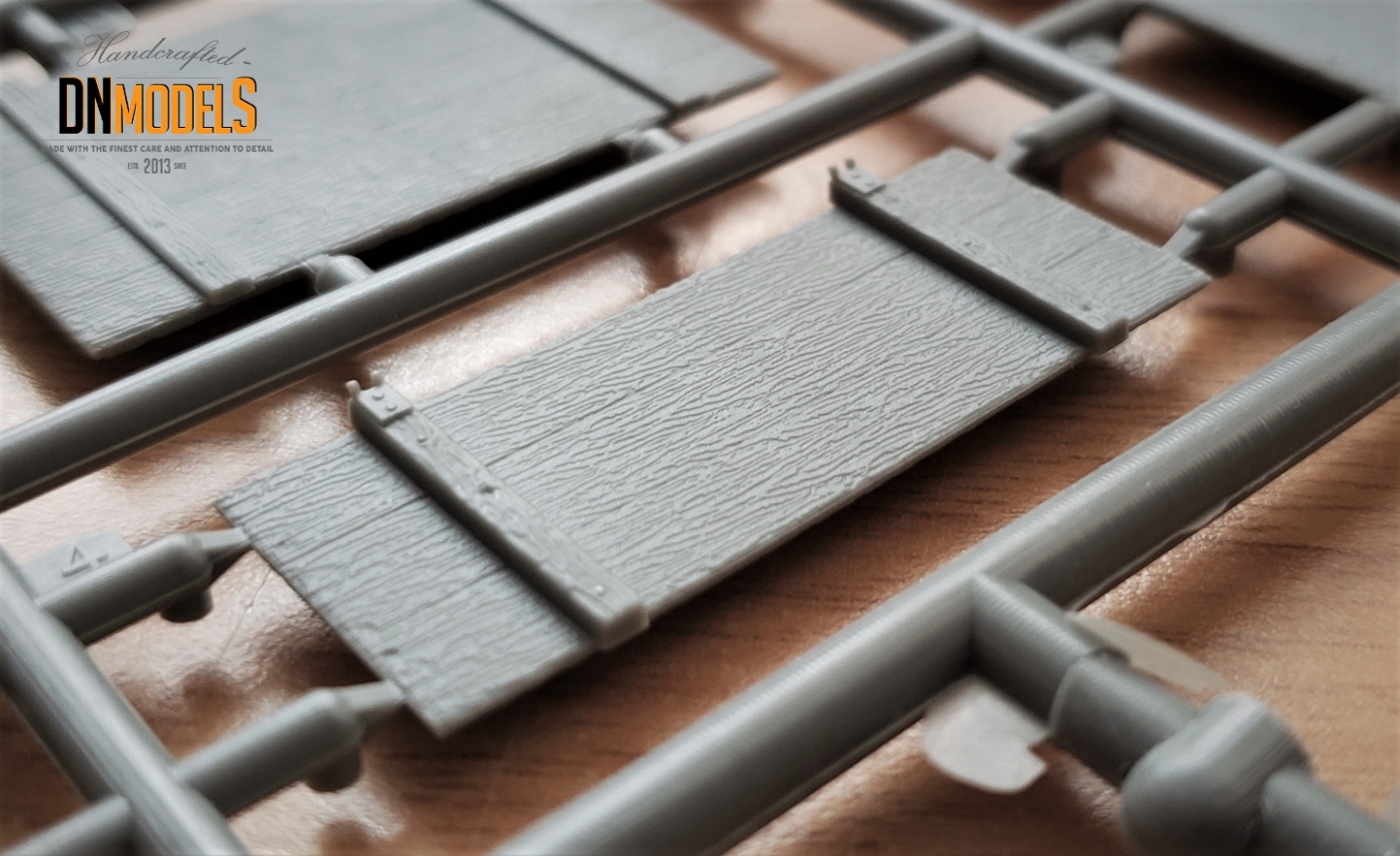 Sprues are not many, but they are enough. Besides repetitive ones, which are mandatory, everything can be seen on the pictures in this article. Especially interesting and attractive are MiniArt’s tires. They are always created in layers and that gives very interesting and highly realistic final product competitive with resin parts only. This time though, this is OOTB, so money well spent.

All the tires are nicely engraved and show balance in between quality and detailing.  They might seem like a problem for the inexperienced modeler, but once you get to work with them, you will quickly realize that they are cleverly thought trough and easy to be dealt with. In addition to that, the markings revealing the company that produced them is there. Without any intentional errors like some other brands do. 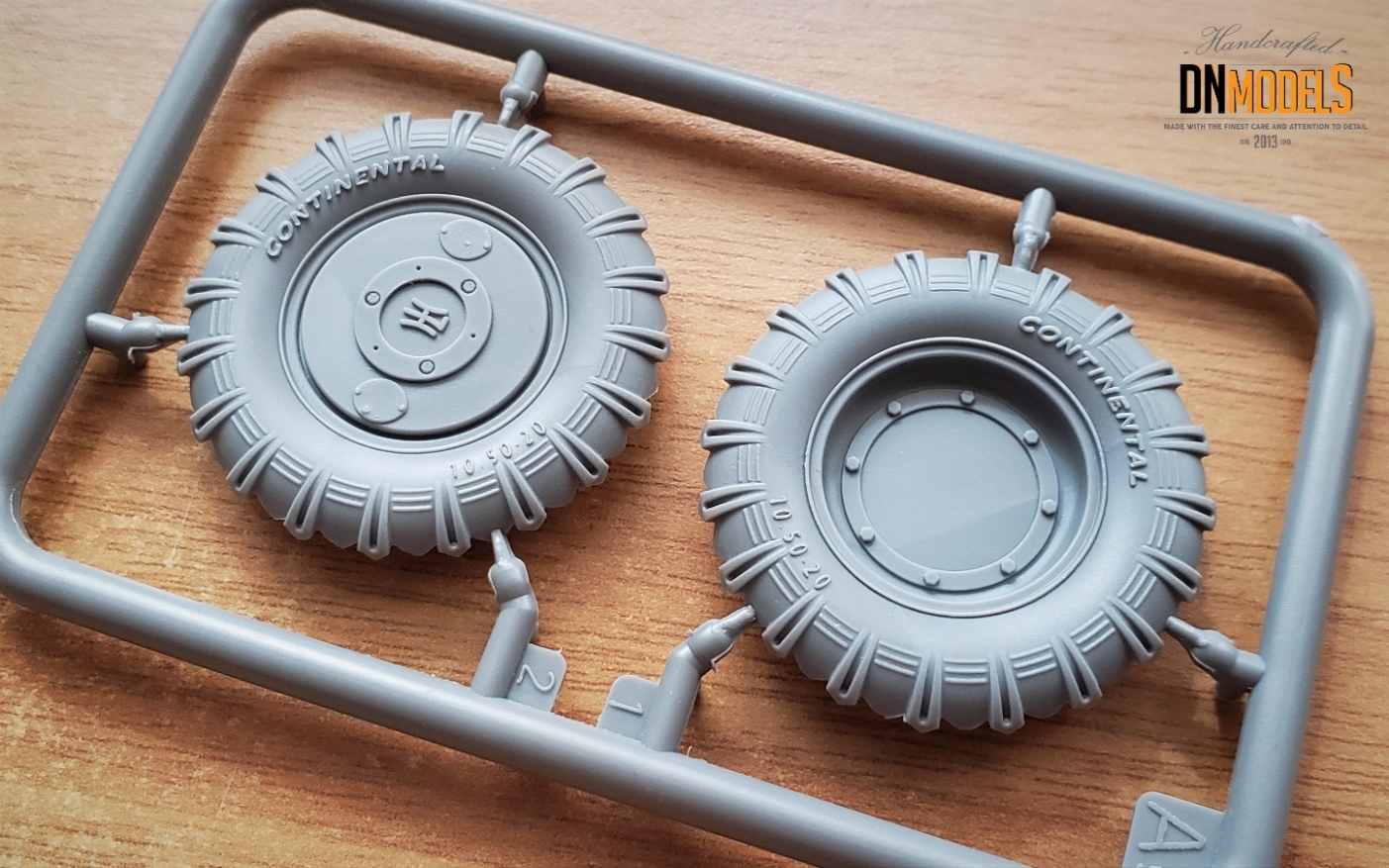 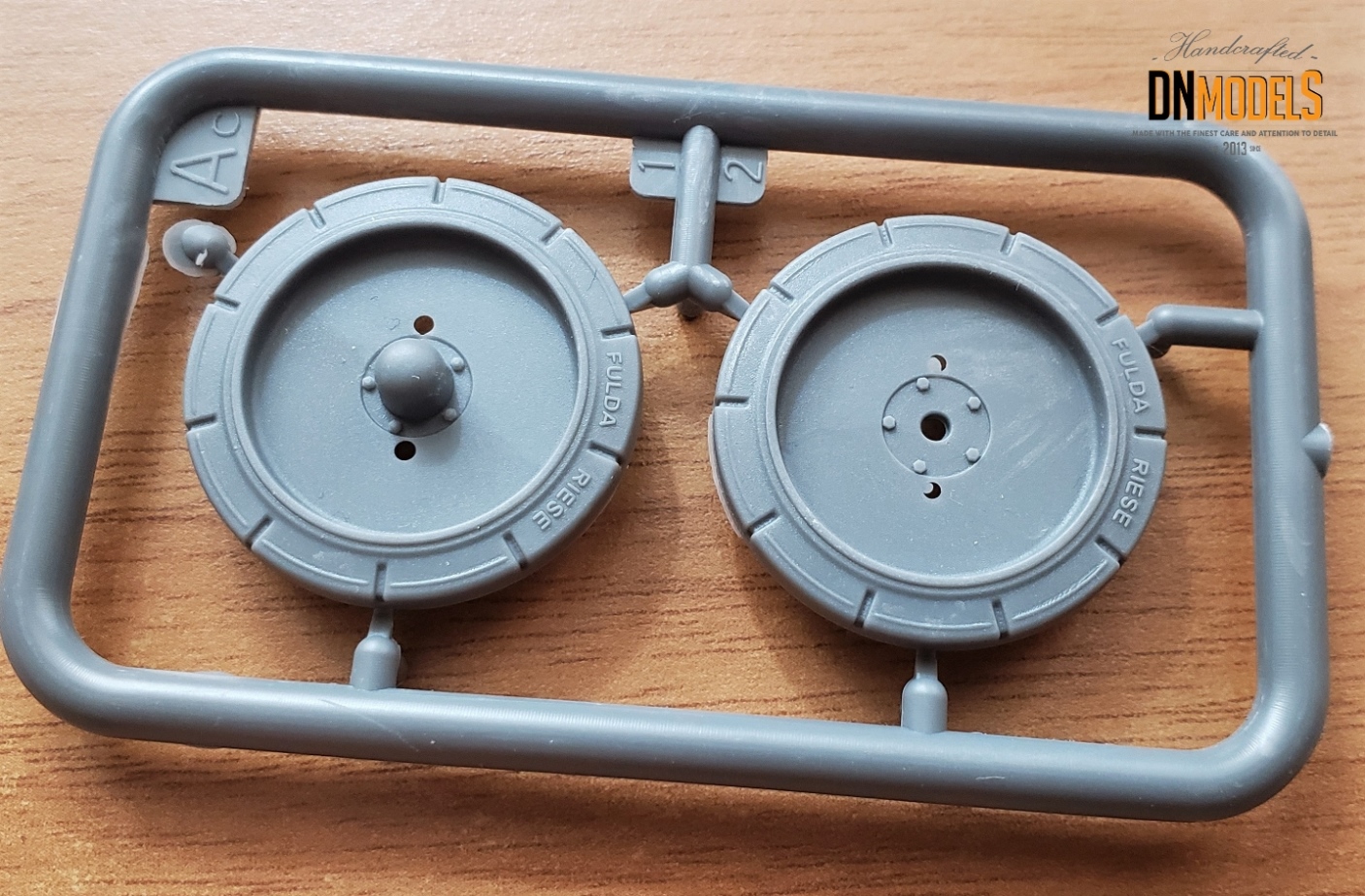 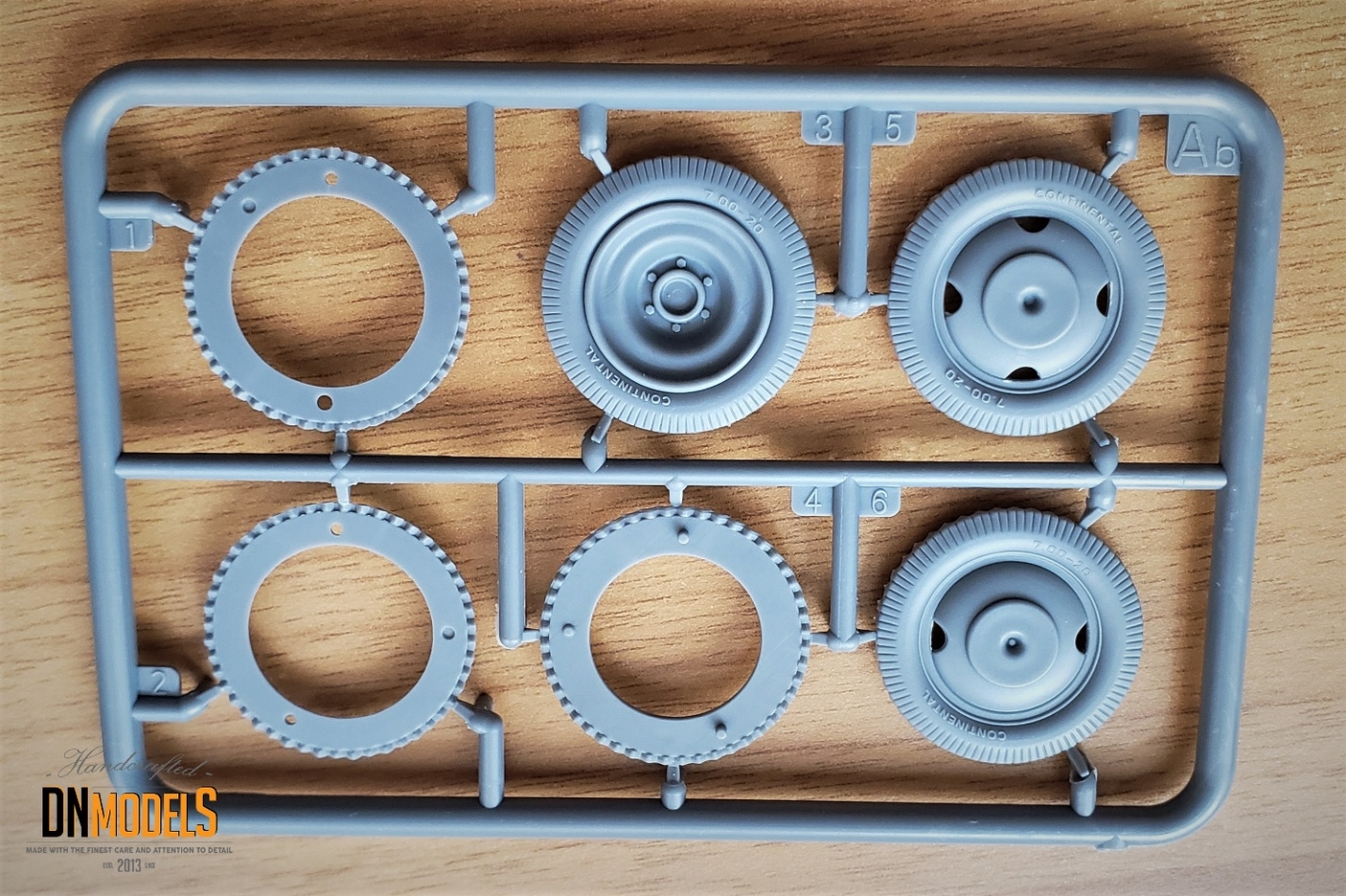 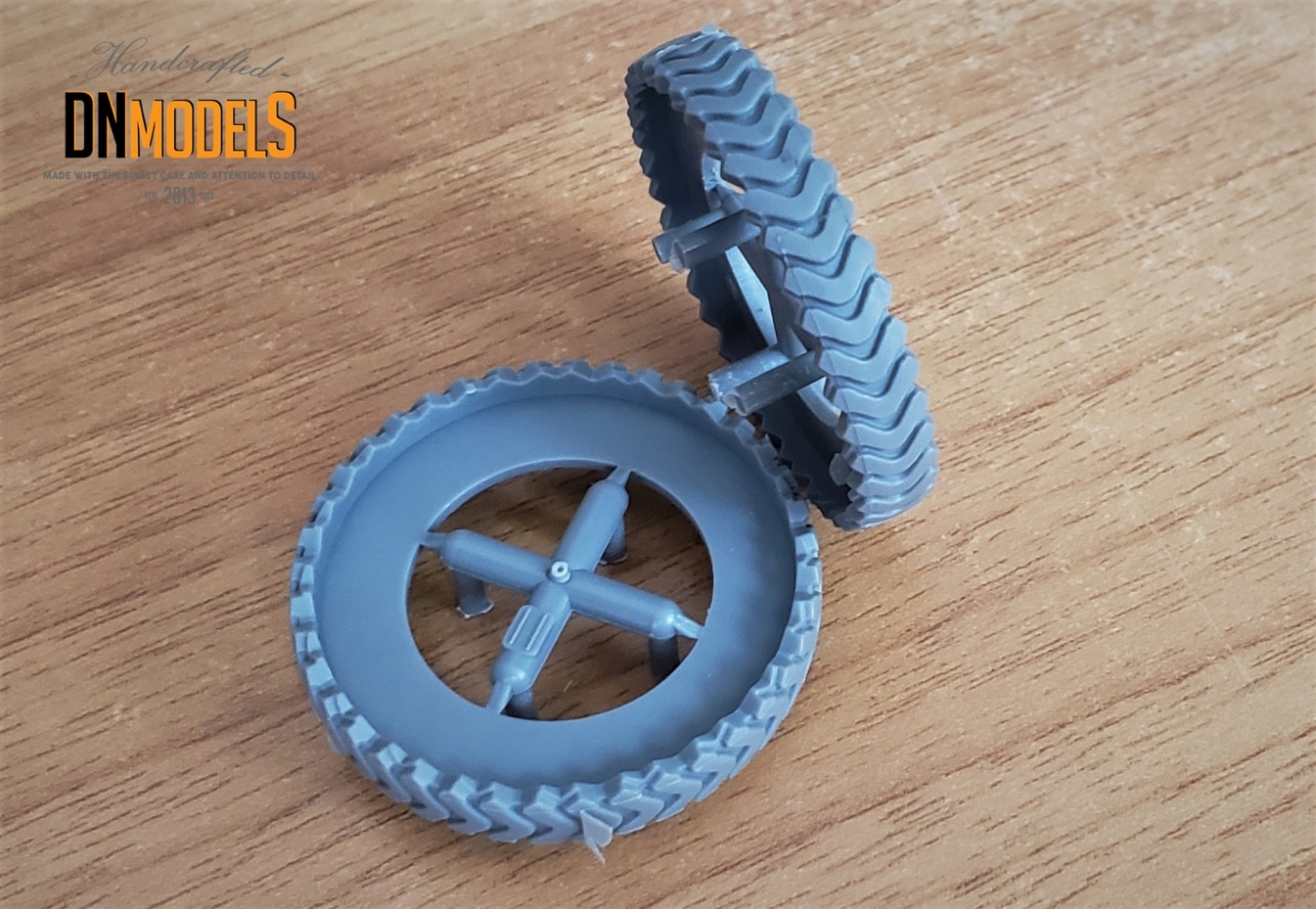 The paint options with D8506 Tractor with Cargo Trailer are two. One of them shows a vehicle with free hand camouflage, which is very interesting to be played with. That offers certain extent of improvisation with the proper paints and colors and brings a form of an artistic value to the modeler. The other one however, being a single-color option is not a hair less interesting. With single tone paint schemes, the weathering options are enormous. That is even boosted by the fact that we’re dealing with a tractor here, which means – mud, dust, dirt, splashes and what not.

Of course, none of these is superior to the other, especially with the two reasons stated above. The fact that we don’t have more options is self-explanatory too. With those two, we have more than enough to play with. Besides, who knows what one might find if a thorough archive research is done on the D8506 subject. 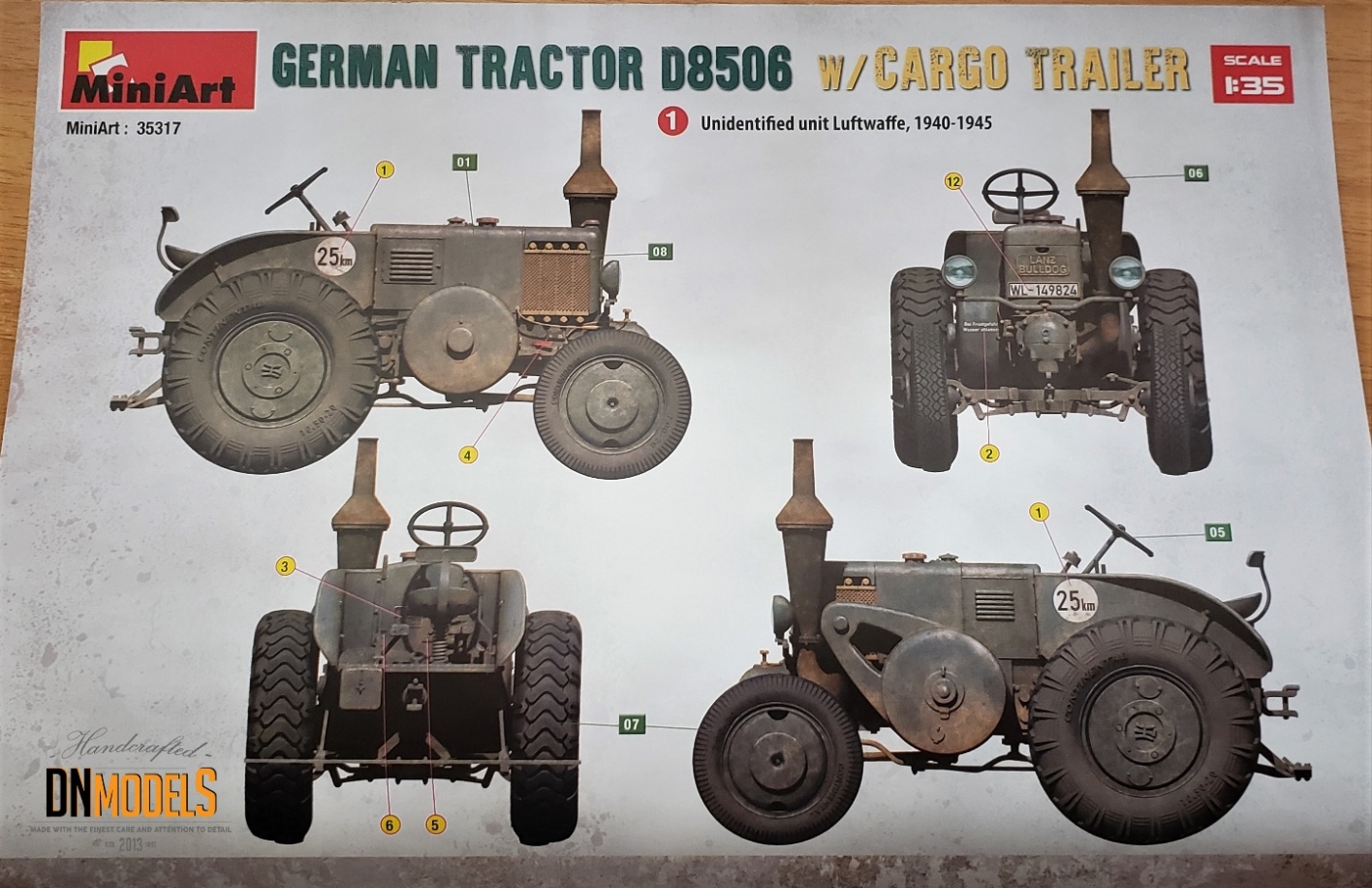 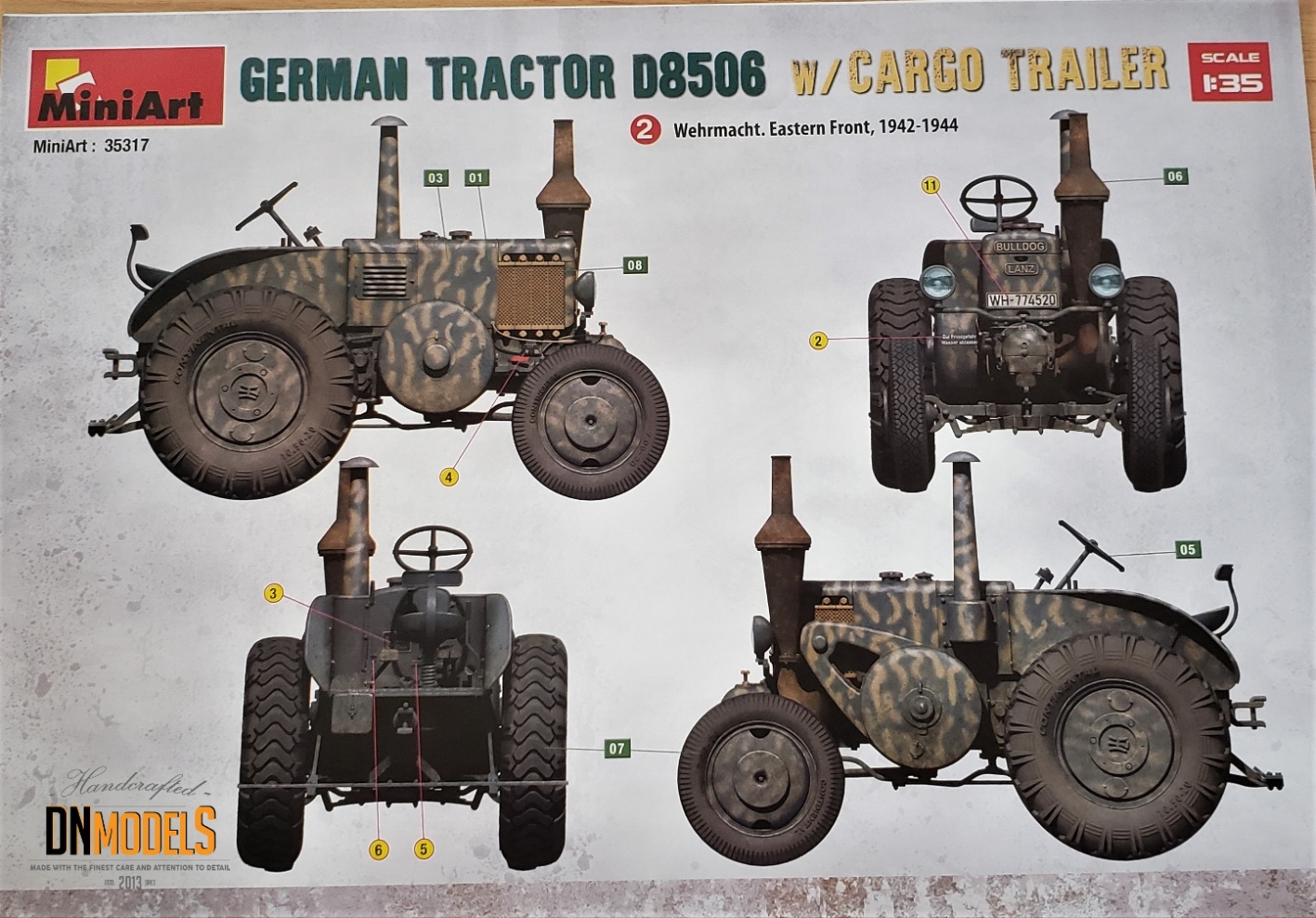 The kit itself is a very worthy investment for several reasons. Besides being an user-friendly kit from MiniArt /which is a rarity/, this is very affordable set too. With the constantly increasing prices of the kits and the amount of aftermarket needed for most of them, here we definitely have a winner. Everything in the box speaks for itself and it is visible from the pictures above. It is not very much, but any kit suitable for beginners might be categorized under that easily – simple, straight-forward and friendly.

What makes this particular kit great is its idea – a tractor and a military one at that. WWII vehicle too. Interesting camouflage and a subject that was used on the Eastern Front. That are all things that interest modelers highly the last half a century or so. Also, it is a step towards something more complex from the same brand. And recently, with their new Panzer IV and T-85 series, MiniArt stirred the water rather seriously. In other words, if you are experienced, there is not much to tell you, everything is self-explanatory. But if you are beginning now and you have only couple models on your shelf, this kit is a great step up from the regular and a great intro into the MiniArt’s World. And the more deeper you get into it, the more complex things become. More interesting too.