MiG-29SMT 9-19 from Trumpeter in 72nd scale is the newest kit I got in my stash. I dumped 1/72nd scale models years ago. So I bought this kit for tryouts. Tryout some masks for the SMT, tryout the scale improvements over the years, tryout newest Trumpeter additions. MiG-29SMT is not among my favorite planes, but is among my favorite MiG-29s. It is the newest addition to the line, and as with the MiG-21SMT, we have a very pumped-up basic airframe, designed to catch up with time and competition. The results most likely will be rather poor, but still for aviation lovers, this will be a nice addition to MiG-29 line. This goes for modelers too. MiG-29SMT has been offered already, in 48th scale and this time from Great Wall Hobby. Trumpeter promised 32nd scale version in 2017. So, 72nd scale version was – in my eyes – a good idea to see what we are about to get with this MiG-29SMT. And I was in for a big surprise…

During the last almost two decades, since I stopped using 72nd scale, things changed. With so many improvements in quality and mouldings, so many new companies, 72nd scale changed into a rather interesting area, than the basics that we had back in the 90s. 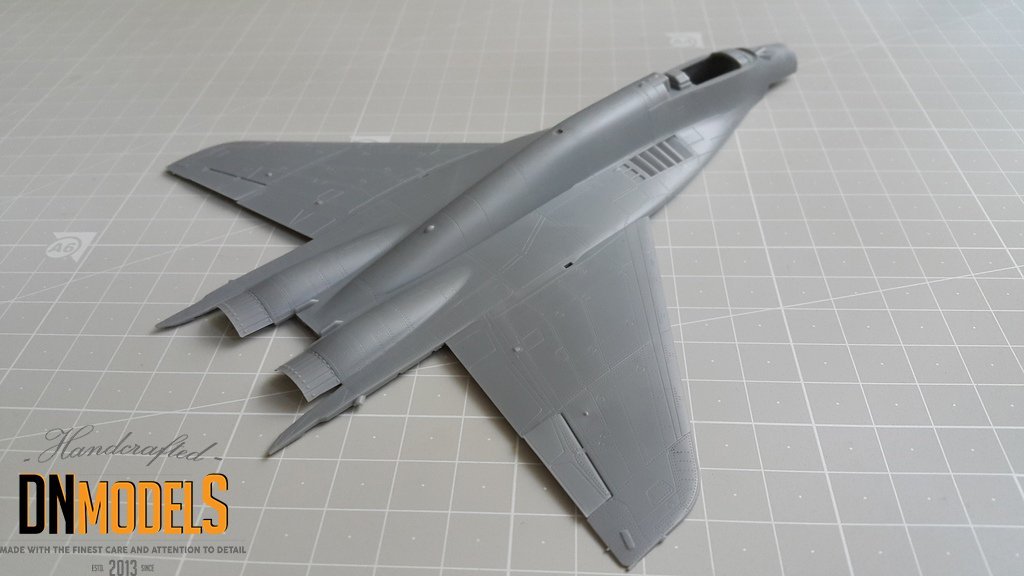 Now it is very true, that this scale is suitable for bigger planes – jets larger than F-111 and Su-24, old 4 engine bombers and so on. But things with scale modeling moved so quickly last decade or so, that nowadays 72nd scale kits are better than 90s 48th scale ones. Even 32nd. This MiG-29SMT 9-19 is the perfect example.

Small soft and in well known blue colors, Trumpeter’s MiG-29SMT 9-19 box is what we are used to get from Trumpeter. The boxart is very intriguing though. Also the description on the sides. For 72nd scale box it is pretty good, not to mention that a lot of other companies like Revell and Italeri continue to issue their kits with their old and inferior boxes. A good job from Trumpeter.

So amazing! So so amazing…. MiG-29SMT 9-19 caught me by surprise: the upper and the lower parts of the body were the first two parts that I saw. And it struck me as lightning! This thing really is great! Besides the obvious thickness problems that we encounter even in 32nd scale, everything else seemed just in place. 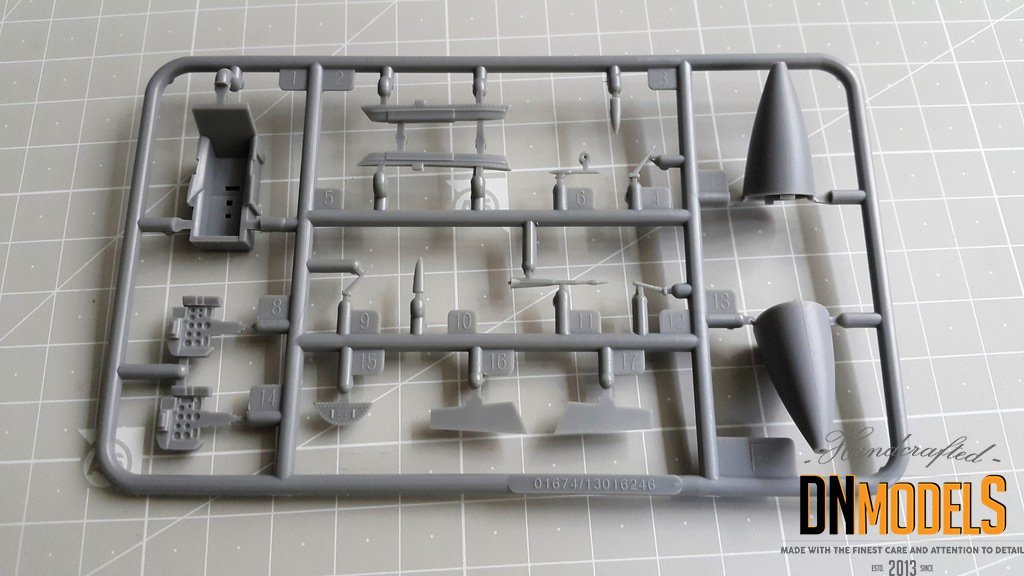 All the rivets are here, all the panel lines. The fit in between those two halves is almost perfect. Besides, the ailerons on the MiG-29 has been designed to move slightly upwards for additional stability at high speeds and we have that too. We had it with MiG-29 from GWH, and probably with their MiG-29SMT 9-19. Here of course, due to the scale we have it exaggerated and not slightly. But it is here and that is what’s important and impressive!

The nozzles are thick and rough and could’ve been better. Thee are substitutes for those already. The intakes on the other hand are again quite nice. This goes for the wheel wells, their doors and horizontal stabilizers. 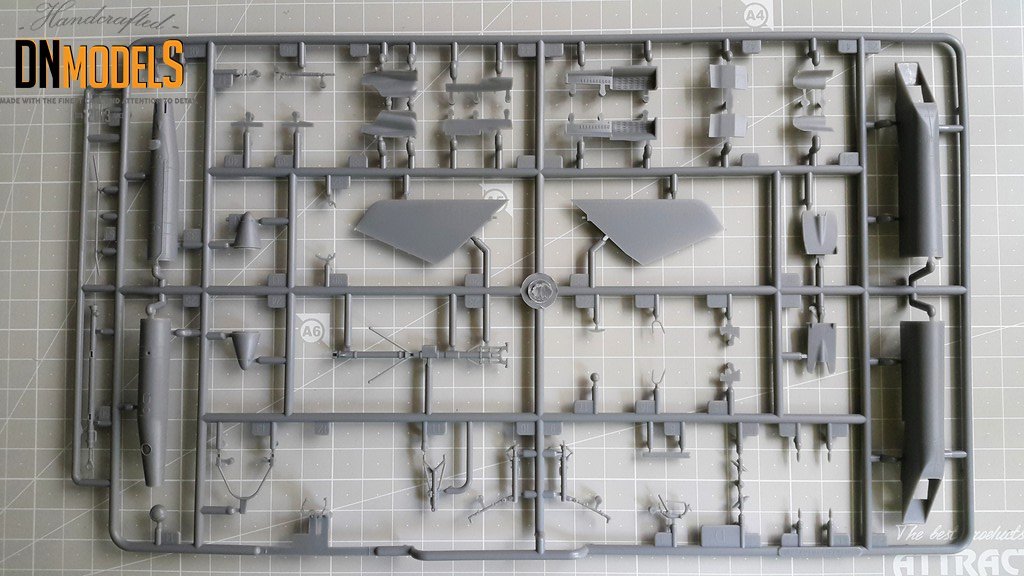 Some of the external fuel tanks are with some issues, but the cockpit and the gear struts are great too. The nose cone ass well.

Vertical stabilizers are thick but state of the art when it comes down to engraving. I’ve seen so much worse and even on 48th scale…with kits released after year 2000…

MiG-29SMT 9-19 features two sheets of decals: 11 x 11cm and 11 x 12cm. The larger one includes mostly technical markings which are tiny and very very delicate. Surprisingly, they seemed a lot to me. Even more than what we have in Academy’s MiG-29 in 48th scale. 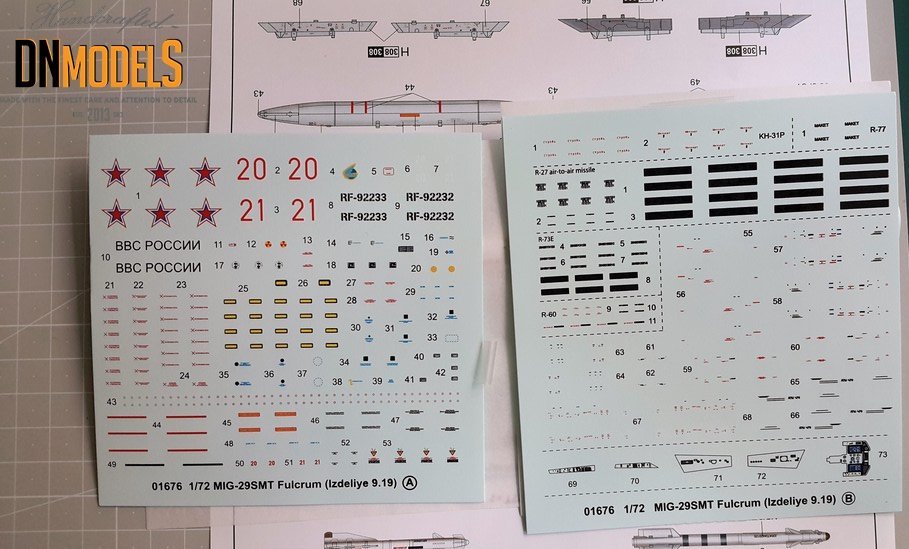 The other markings – the red stars and VVS Rossii /Russian Federation Air Force/ are clear and nicely colored. They also feature the serial number of the aircraft and more technical markings. Those two sheets looks thin and you have to deal with them for a while, since there are tens of decals to be placed. Surprisingly for MiG-29…

MiG-29SMT 9-19 feature pretty much the same canopy as the older MiG-29 versions. Here we have that packed separately and carefully covered with a white sheet. Trumpeter does that for their most delicate parts on various kits and they did that here too. It is visible from the get go, that the advanced technologies and the quality materials helped here. The clear is clearer than a lot of the 48th scale kits that I’ve seen through my life and even with that not-so-favorite subject of mine, I gotta give it to Trumpeter for the effort. There is some thickness issues here, but still – we are talking 1/72 MiG-29SMT here. 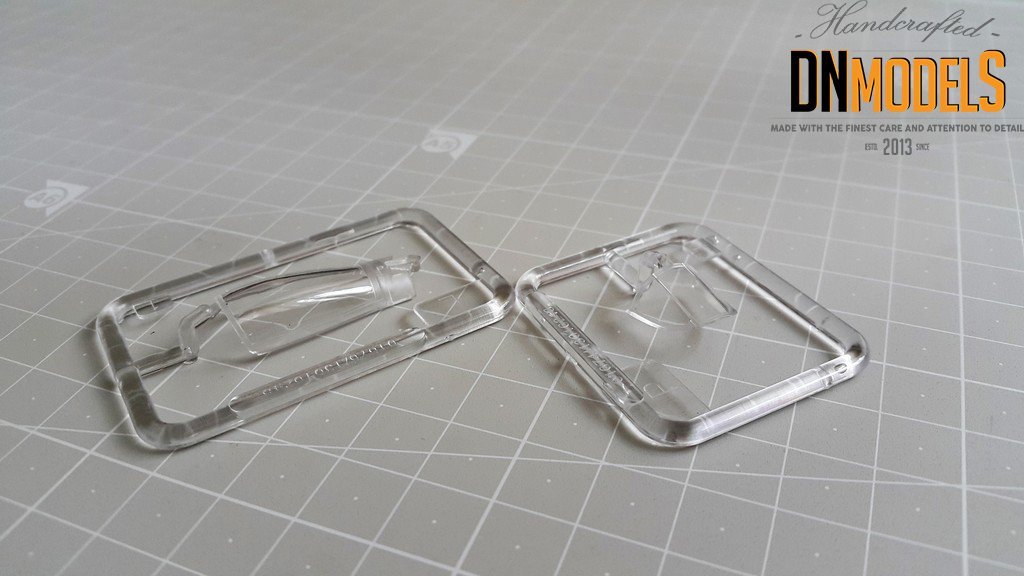 They are pretty much the same, although there are two of them. The new grey-scale splinter camo, typical solely for MiG-29SMT 9-19. This is rather new approach to the camouflaging of Russian modern aircraft. Similar thing we have with their PAK-FA project but that is only preliminary stuff. With MiG-29SMT 9-19 we have it in serial production. 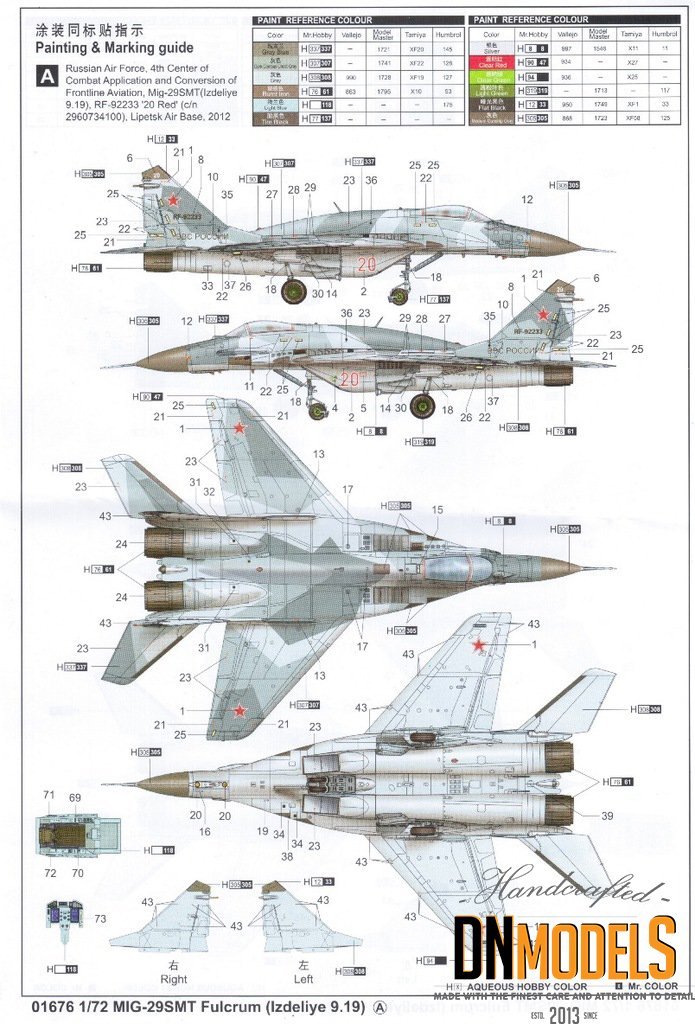 The schemes are printed on nice colored sheet with thorough description of decals and their place. It is two sided one, but the jets looks similar. That is supported with another similar sheet for the pylons and the ordnance, again in full color. 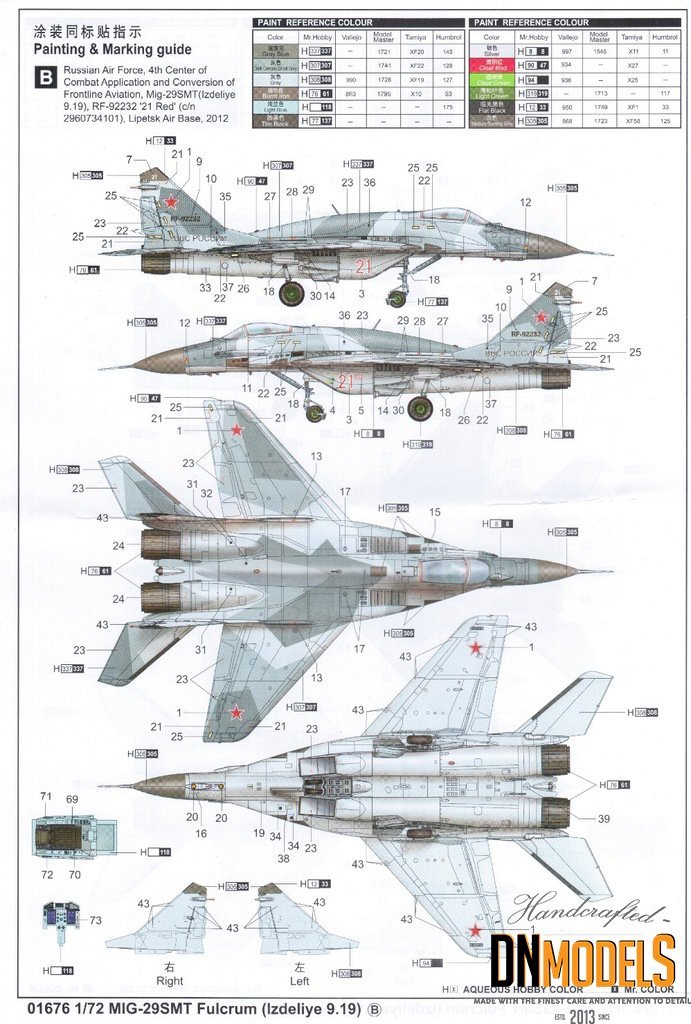 are well know aircraft instruction leaflets that we get with Trumpeter kits. If you have dealt with those, you will know that for 32nd, 48th and 72nd scale they are pretty much the same. Black and white, horizontally placed on the leaflet with clear depictions. Rarely some errors.

Since the build here is simple and straight-forward one, there isn’t much to say about them.

We have enough of those with MiG-29SMT 9-19 from Trumpeter. Although with full metal gear the plane doesn’t look so attractive and rarely flies, Trumpeter did their best to give us as much as possible adding this much of an ordnance.

Most intriguing are the sprues with both types of R-27 rockets, R-27R and R-27T. Other ones are nice too, but those are done with some special attention. Pretty nice job! 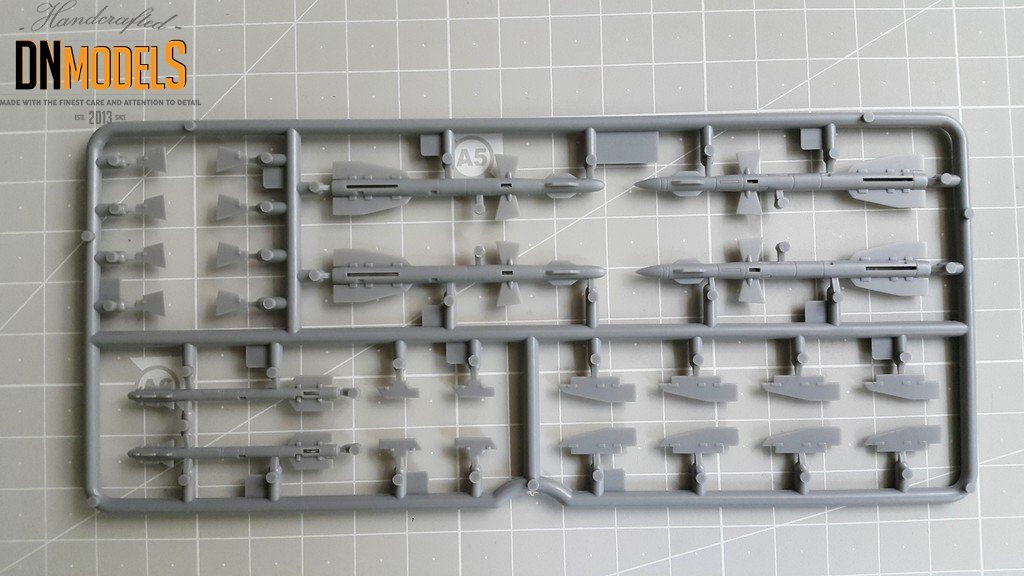 MiG-29SMT 9-19 from Trumpeter is one damn fine kit! I was away from 72nd scale for almost two decades and I lost track to most of the production there, but this…is a gem! All the details included and the fact that this is comparable with some 48th scale kits is simply stunning for me!

I cannot wait to compare it side by side with GWH MiG-29SMT 9-19, as well as the upcoming 9-19 by Trumpeter in 32nd scale. What can I say?! The camo is great, the price is low /after all it is 72nd scale/, the detail is great and most importantly it is suitable for all ages and types of modelers. From the beginner to the expert! 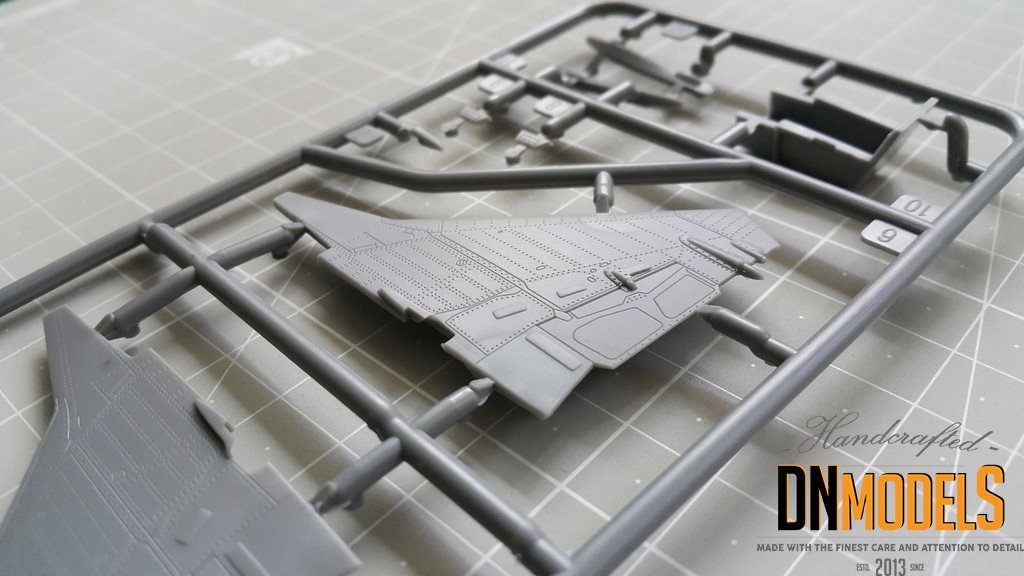