Mi-24 Hind is – as usual – the main star of the recent Russian Invasion in Ukraine. The Soviet helicopter is participating in most of the conflicts around the World in one form or another. That, alongside with its aggressive appearance serves as inspiration for many. From Rambo III movie, through actual warfare and up to the private hands of the proud owners, Mi-24 is undoubtedly a legend. It is rather old – more than 4 decades. However, it future seems secured.

Kit-wise, Mi-24 is represented in several forms. It is, all together with the Antonov An-225 Mriya and several T-series tanks – the most attractive plastic model to buy nowadays. T-72s were the first to vanish from the shelves. Then they were followed closely by the largest transport plane ever built, with its single produced copy being destroyed in the first days of the war. Mi-24 luckily and unlike the Mriya, is represented on the market by various options and in many variations.

Small scale Mi-24 can be found easily. 1/72 is everywhere. However, the bad news here are, that the best option comes from Zvezda. It is a Russian model kit maker and buying it now and in the near future is not the best option. As we all know, goods from Russia are being banned all over the World, since every dollar spent on those, goes to a country that is being the aggressor as of today. So we would advice to stay away from it for now.

Hasegawa opts with a modified version as well, but next best thing is to jump up scales and go to 48th. Revell is a kit that was not bad when it came out. It is an option related to the old Monogram tooling, also among the limited options when it came to life back in a day. But with that said, again the other side of the medal comes to the light – Zvezda’s relatively new tool 48th scale Hind is a better option. For the reasons stated above though – not the best choice.

A bit of a dead-end street. 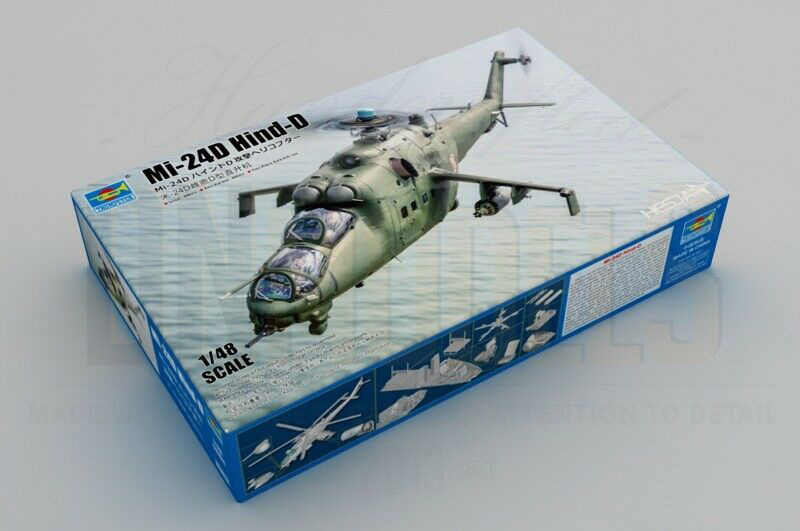 Trumpeter just released a 48th scale version /seen above/ of the Hind as well. But since that is fresh, it is in limited availability at that point. So again, next best thing to do is jump up scales and go to their 35th scale variant. And although we haven’t reviewed the quarter scale Trumpeter Hind, we would expect to see the very same design and tooling as in the 35th scale option. Usually is what Trumpeter and Hobby Boss do.

With that said, geometry-wise, Trumpeter Mi-24 Hind in 35th scale has some flaws. They are indeed acceptable, but if you decide to go that way, do your own research before you buy. As we all know that often happens with plastic model kits and proper knowledge and photo material is in order. It is part of the scale modeling process though. And we all love it.

With all those mentioned, we’ll end up here. Any decision that you make on the Hind arena will be depending on your scale and manufacturer preferences, even maybe your political views. We are usually against modeling the aggressor objects in the middle of the War. But, in this case both sides use the Mi-24. So it will be again – up to you.