Just recently the news said that Germany are about to supply Ukrainian army with Gepard Flakpanzer vehicles. Amidst all this chaos in Ukraine, modeling companies are doing their best to keep up and the reasons are plenty. Of course, support in any form will be useful. But information flow is one thing, art is another. And since modeling is a form of art, we can boldly consider that whatever comes out in the modeling world will stay and stand against time.

Unfortunately, companies that produce models are mostly Chinese-based. If you wonder why that might be unfortunate, well, Great Wall Hobby were about to release Digital Flanker in 48th scale as a Limited Edition kit, but it got cancelled almost immediately. The information that lurks around is that since China is in close ties with Russia, any sort of support for Ukraine in any form should be avoided. Well, what better option for support than provide an inspiration for the artists? Give them something – anything!!! – and they will make a story out of it. They will create ART.

Takom released its Gepard Flakpanzer A1/A2 years ago. It was not the most popular of their line, but it is known to be a good kit with interesting appearance. Now, with Gepards going towards Ukraine in real life /allegedly/, Takom decided to re-vitalize their project and re-release it as a Limited Edition kit with Ukrainian flag as a background. 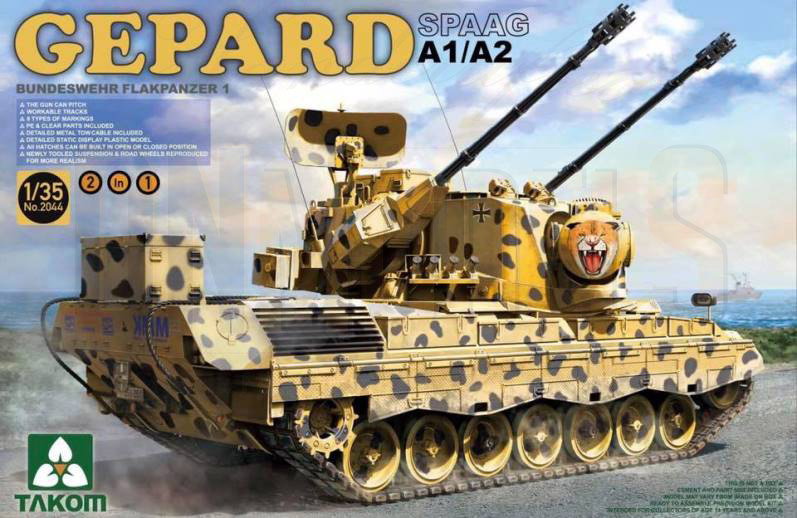 Seems like a great news. However, with that said, we have to add, that we will most likely see those in action and unfortunately, lives will be lost on both sides. With that said, we know that most of the soldiers follow orders and are losing their lives for bigger interests than their own. That is the cruel reality of any war. So we have to add that we feel deeply saddened by any potential loss of life on any of the sides involved, which inevitably will happen. Thanks to those Gepard FLAKs too.

However, Gepard in Ukrainian Limited Edition will help us model this through and hopefully it will remain only as a memory of a war that we pray will end soon. Here we have to add – IF it happens. Because Takom – like many others – are from China. And in one form or another are under direct control of their government. That brings the option that this kit might never see the light of day. But even with that, their standard edition will help.

We have to give it to Takom – this is a bold move. And we have to praise them for it. If you see this kit at some point, our suggestion will be to get it. Because it will bring a lot more than just any other regular model of an armored vehicle. Just like their Digital Flanker would’ve done for the 48th scale arena.