King Tiger tank does not need any introduction. It was the meanest cat of the Second World War, making every other tank look like a tin toy. Many criticize it for it suspension or expensive production, but this beast of a tank was a piece of art by any means and wasn’t rivaled by anything.

The mobility or complex suspension was stated as a low point for that vehicle, but it firing range and firepower made it almost indestructible and the only trouble with it was the fact that it came in too small numbers.

In fact, as a concept for a heavy tank in size and appearance, Koenigstiger was the tank closest to the current Leopard 2 and Abrams, best in business and proven designs dominating the battlefields nowadays.

If there was a tank from the Second World War that one can associate the period with, this is definitely the King Tiger. 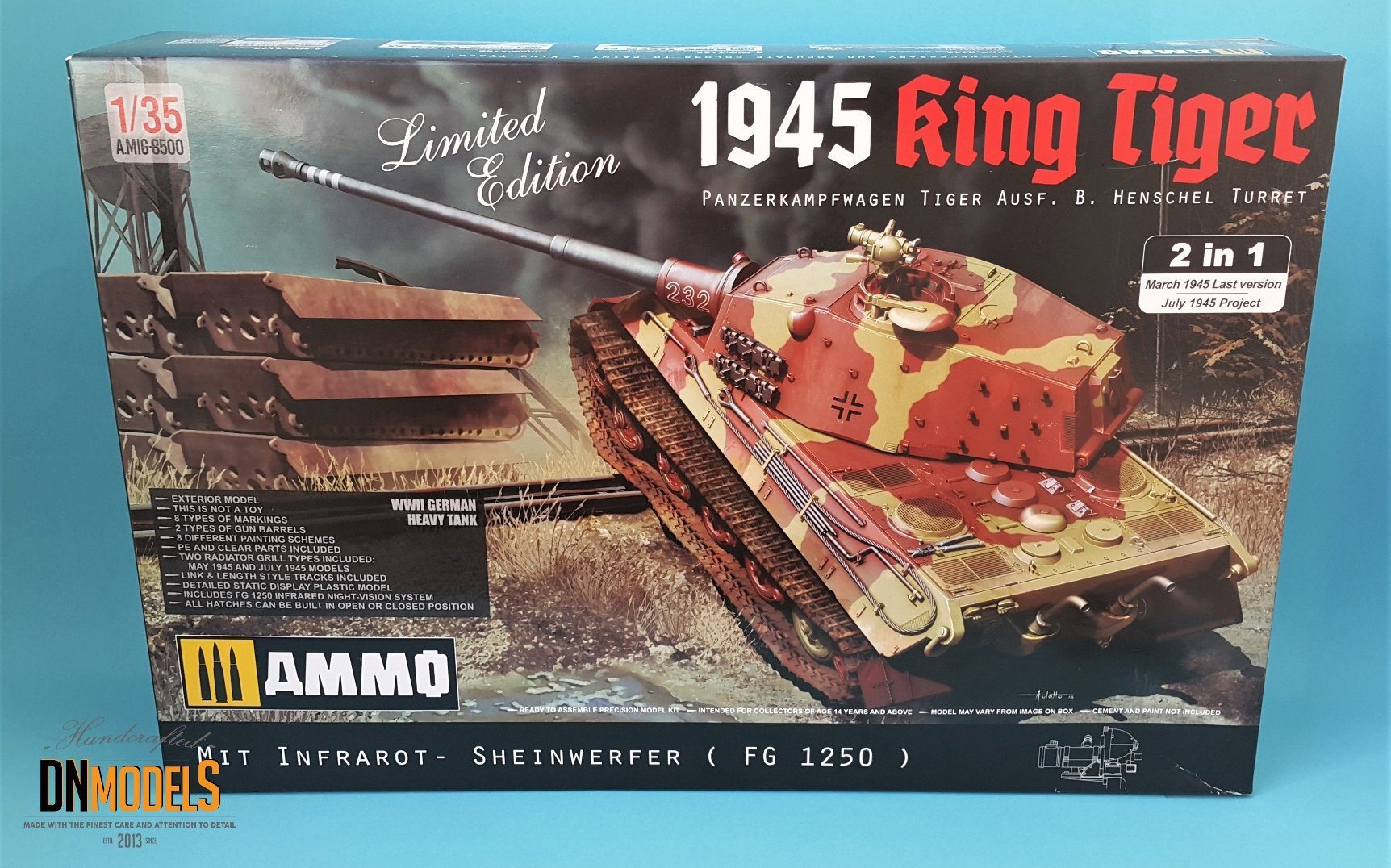 The box and the instructions:

The box that I saw was slightly different from what I expected. Knowing Takom’s thick and deep boxes I was quite surprise by the compact appearance of AMMO’s 8500 King Tiger Limited Edition.

It is very nicely executed, with proper finish and nice colors, although the cardboard seems a little thin for my taste. Exactly the same case as Rockin’ Rhino from Eduard.

The instruction sheet compensates for that with a lot. It comes in a satin appearance, in my opinion a way better and a lot prettier than Takom’s basic sheets that we know. Even though the look is similar, AMMO’s instruction sheet looks a bit more refined and polished.

With it comes another one with the color schemes of the tanks, same in appearance at first glance, but different from being a booklet. It looks more like a leaflet, folding and leaving each color option a page of its own.

Since this kit is lacking interior, it comes with a modest number of sprues. Those are Takom sprues mostly, but we can find AMMO sprues made for the Limited Edition especially. The logo of AMMO is molded into the frame of the sprue and it makes a very good impression. 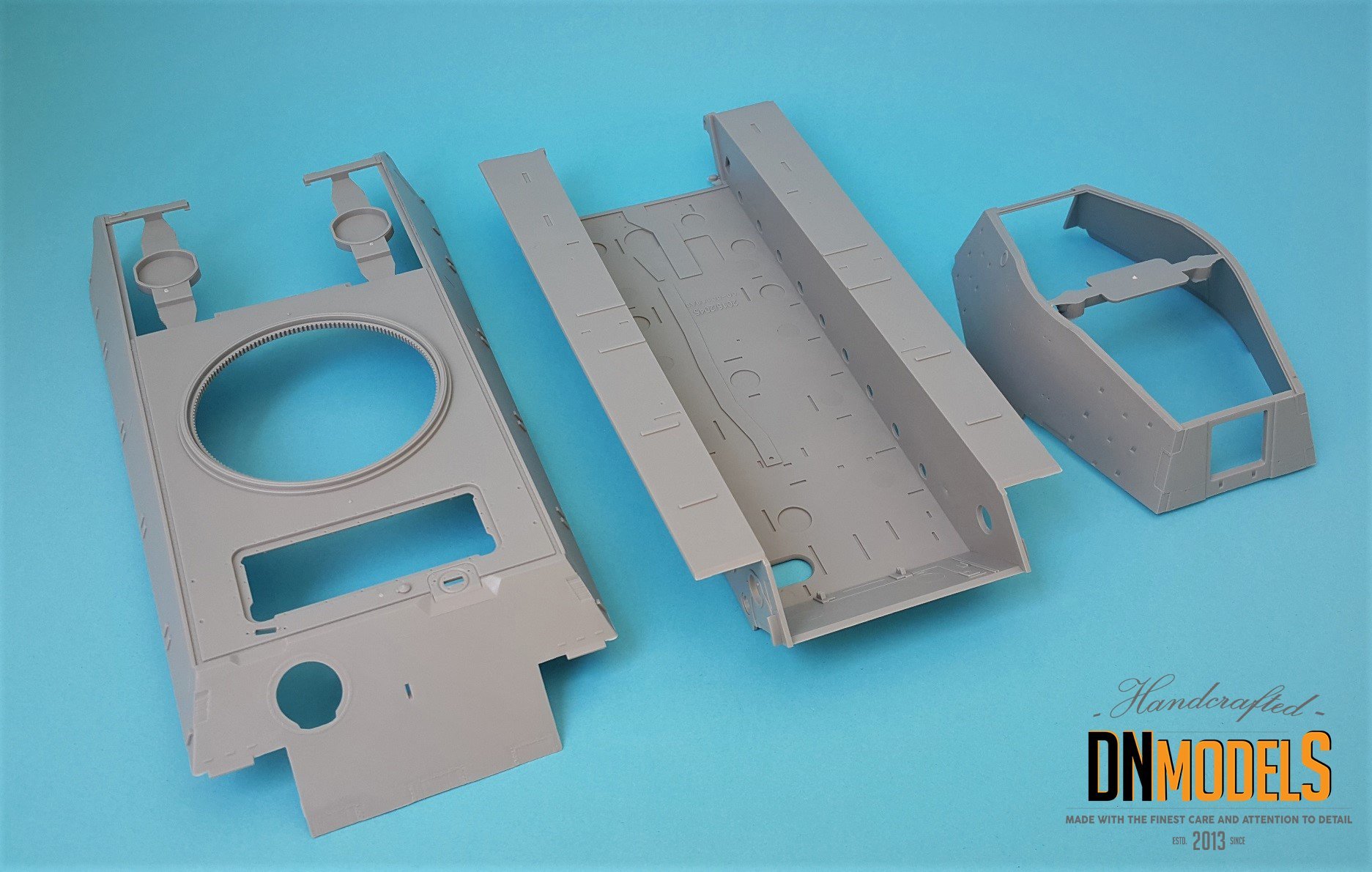 Takom kit is superb, but having specific sprue for AMMO 8500 is very good looking strategy for MIG’s company. That proves the already widely known fact, that that company is not a small player by any means, just the contrary. They are quickly going for the top and only few things can stop their way to stardom.

In general, the quality is great, typical for Takom flat frames of the sprues with light gray plastic. They are easy to work with, without too much flash or molding imperfections. The detail on everything is awesome, and looking at those you can tell that this kit has more to it that it shows. The fact that we have a version with interior is visible here from even the tiniest details included. 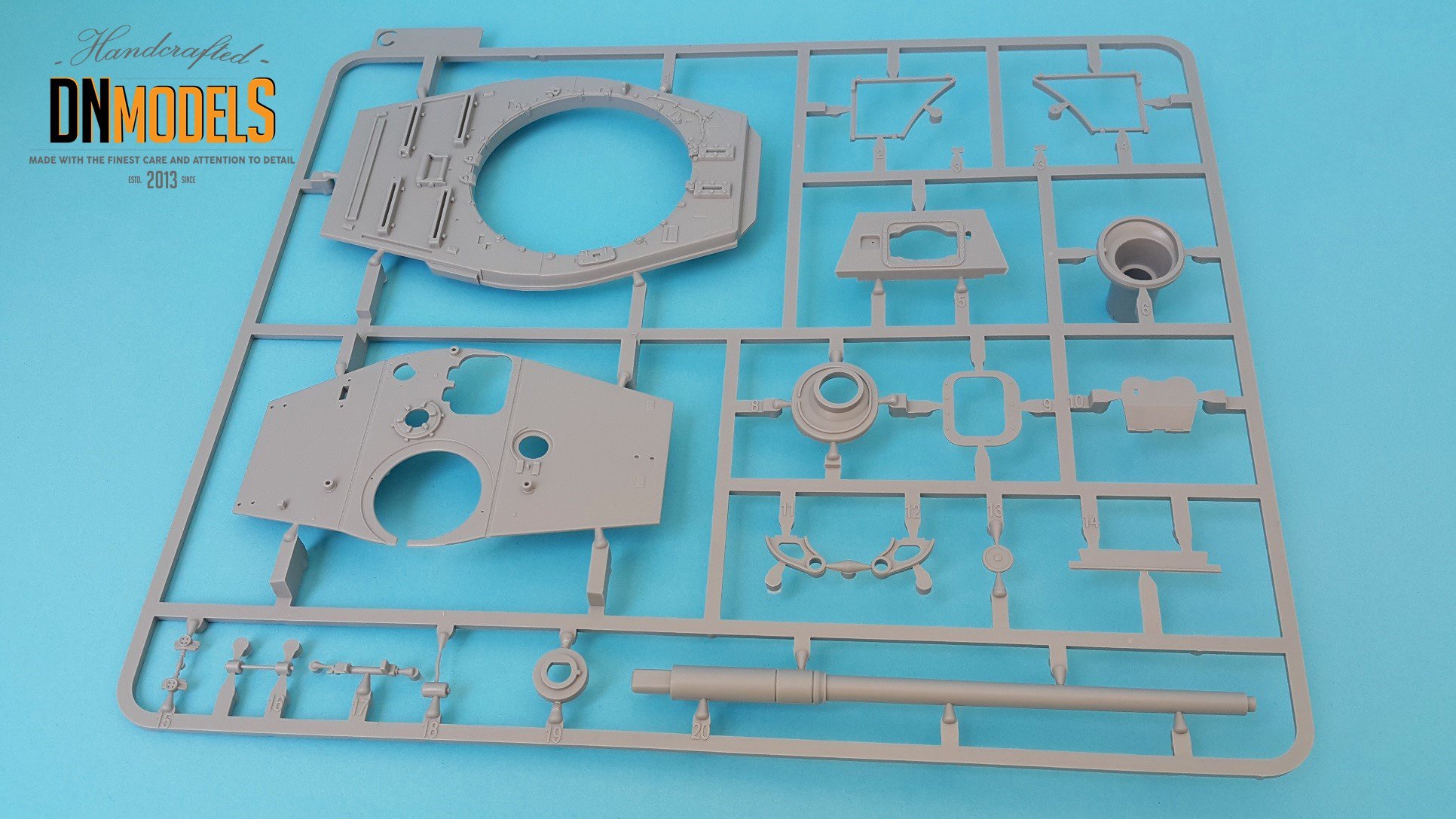 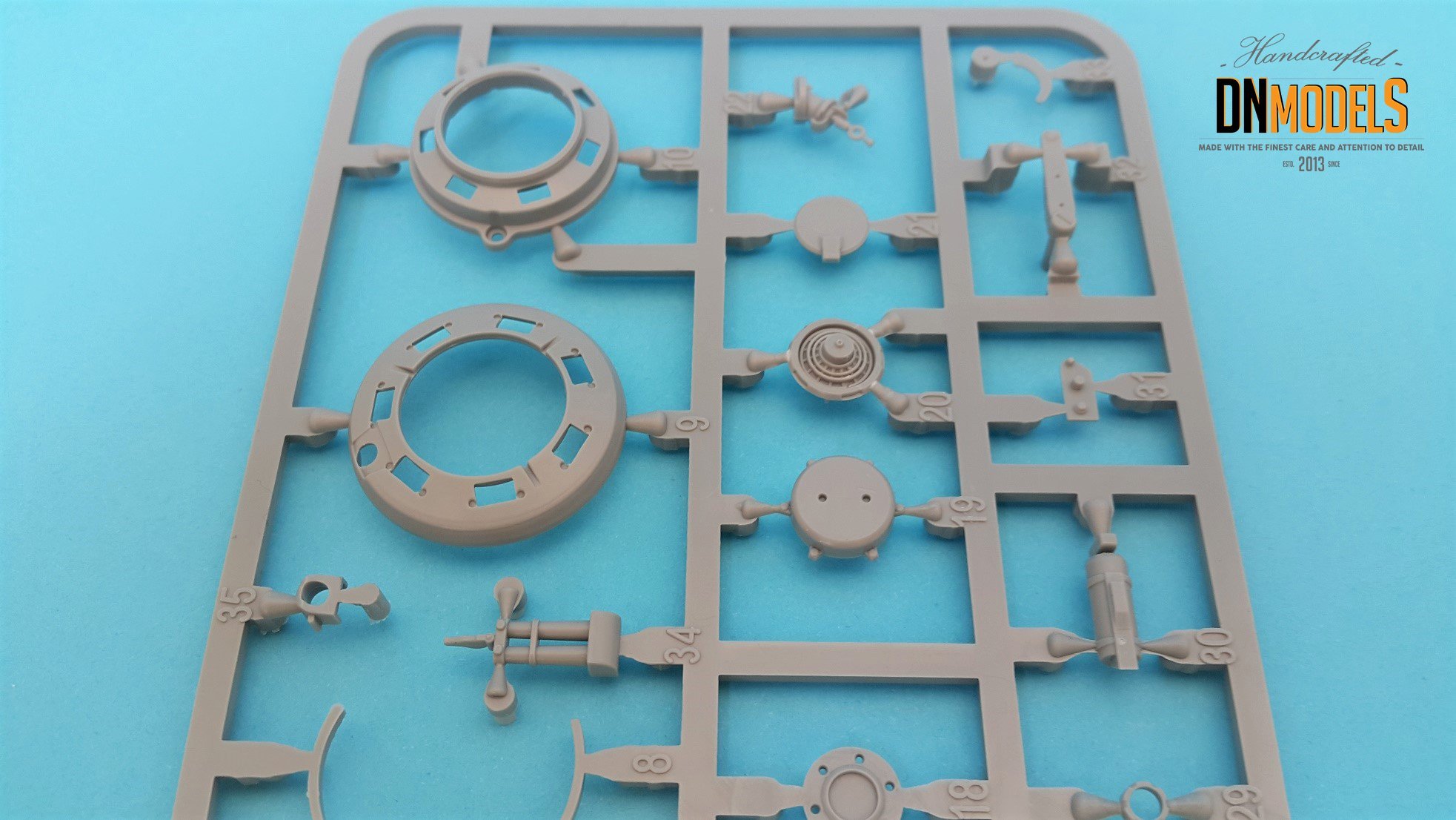 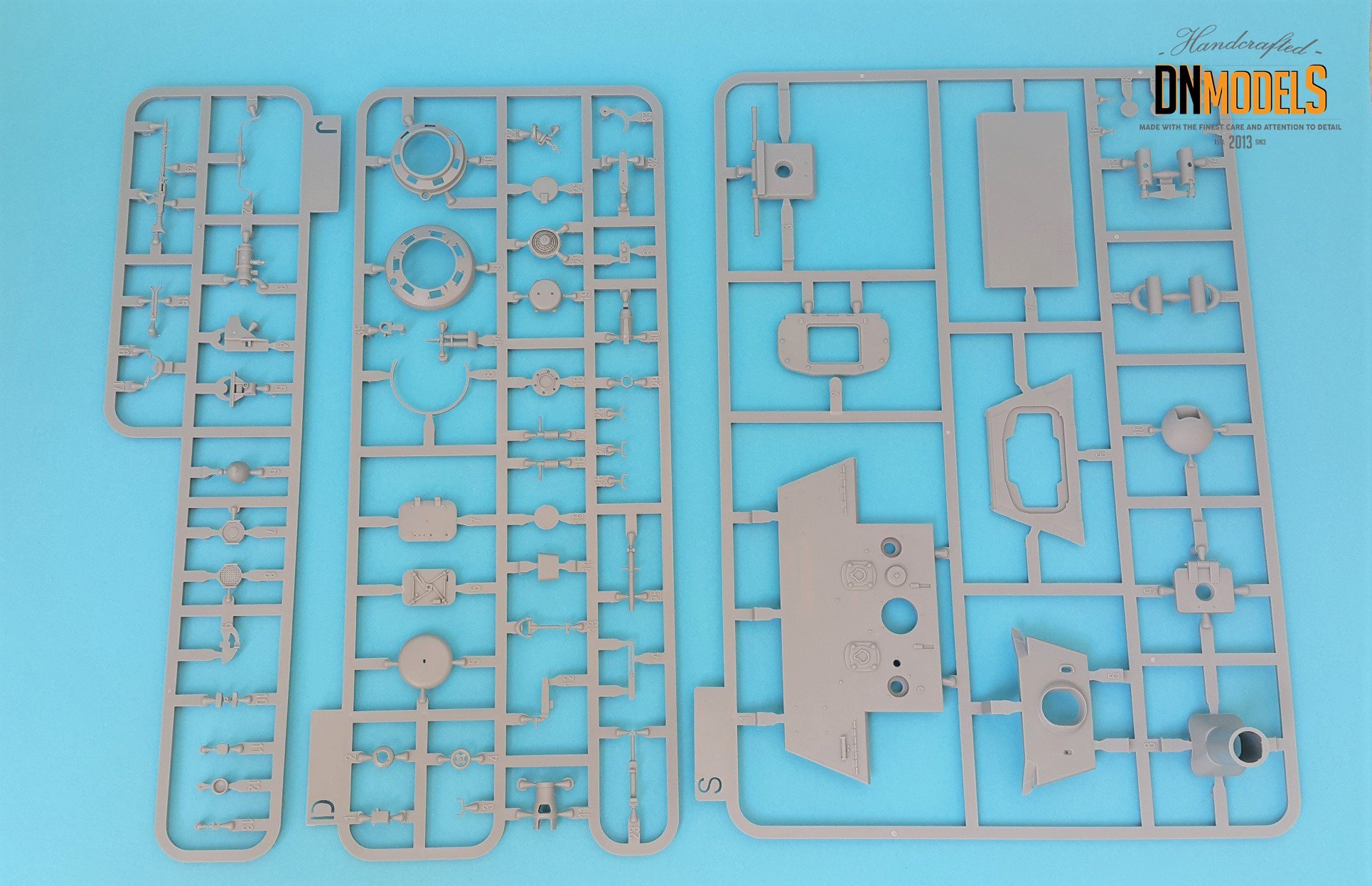 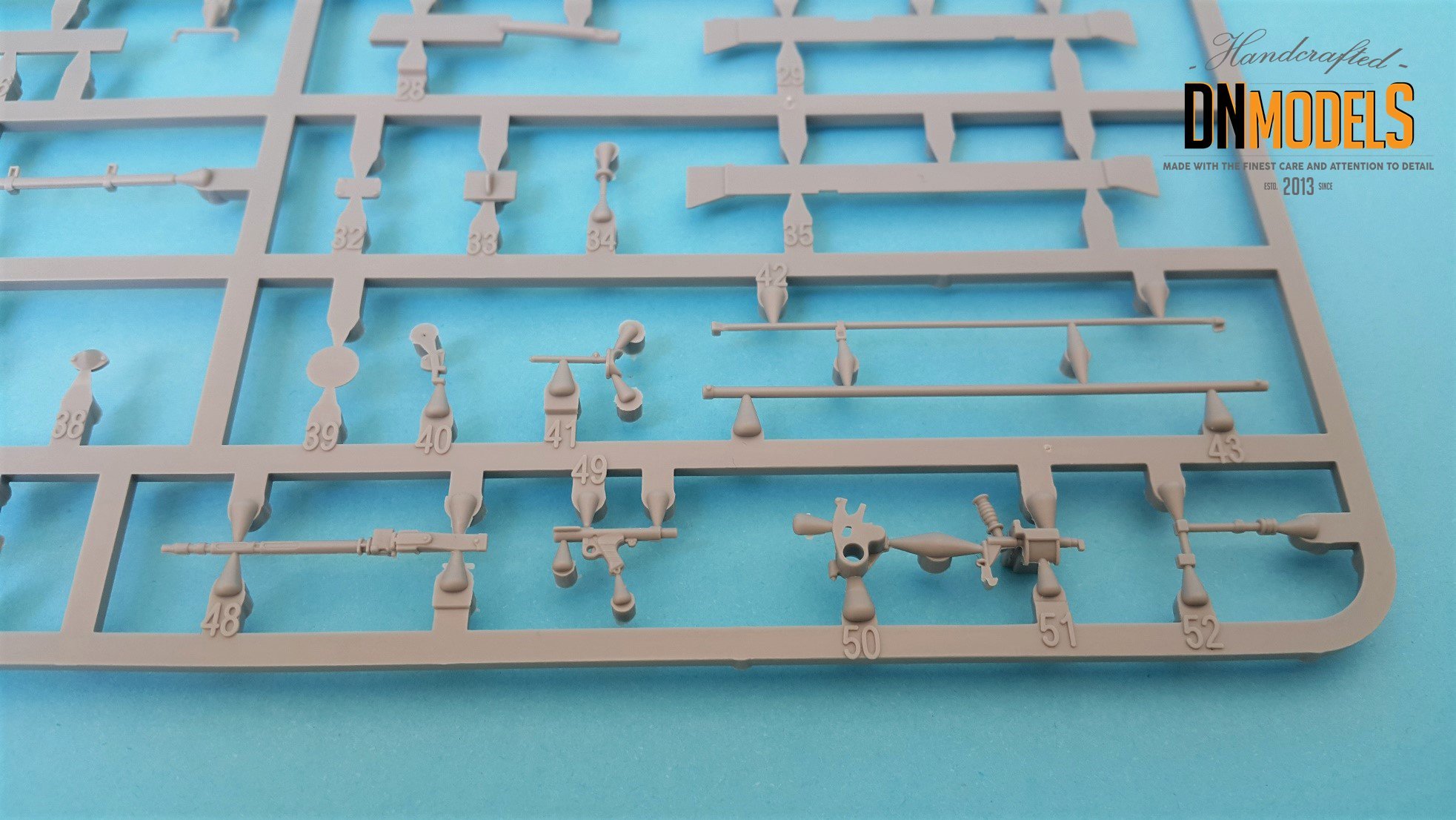 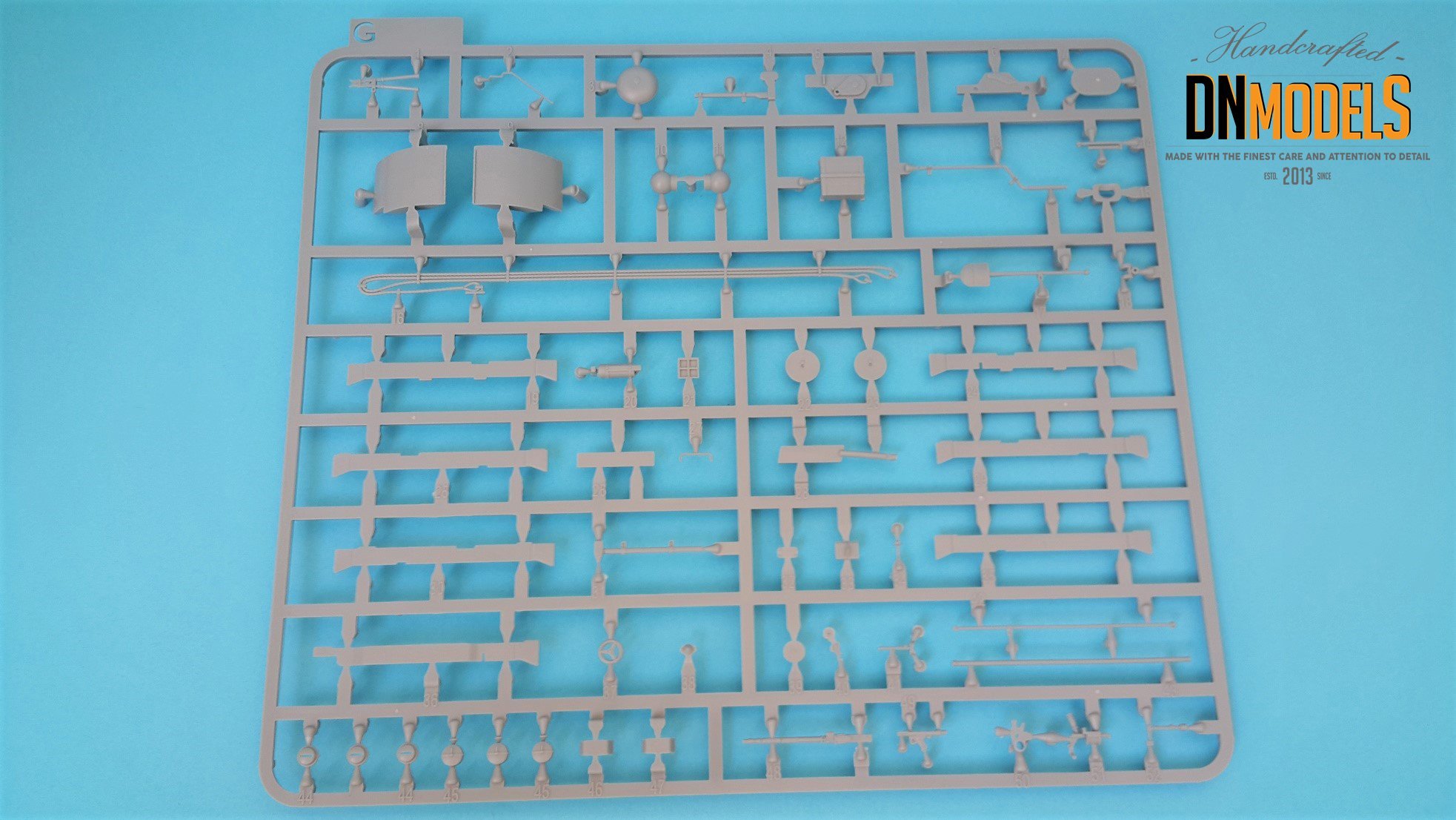 Welding lines and texture is very good, slightly shallower than what other companies are doing. I found that to be little closer to reality, compared with AFV Club for example. There, we have very easy means for weathering the kit embedded in the plastic. Here, the more realistic look and detail will make that slightly harder, but in the end the result will be more natural and more into scale. 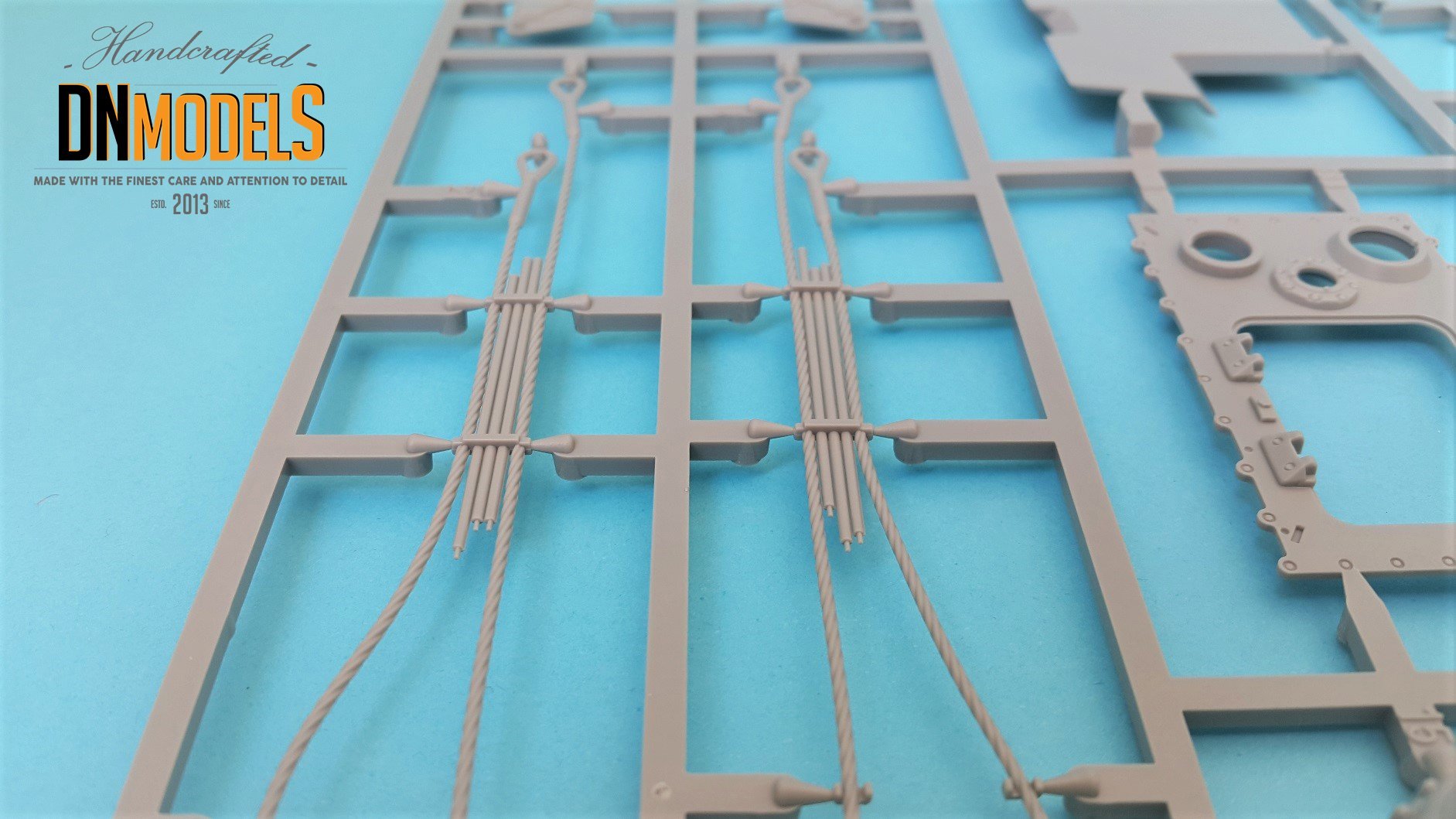 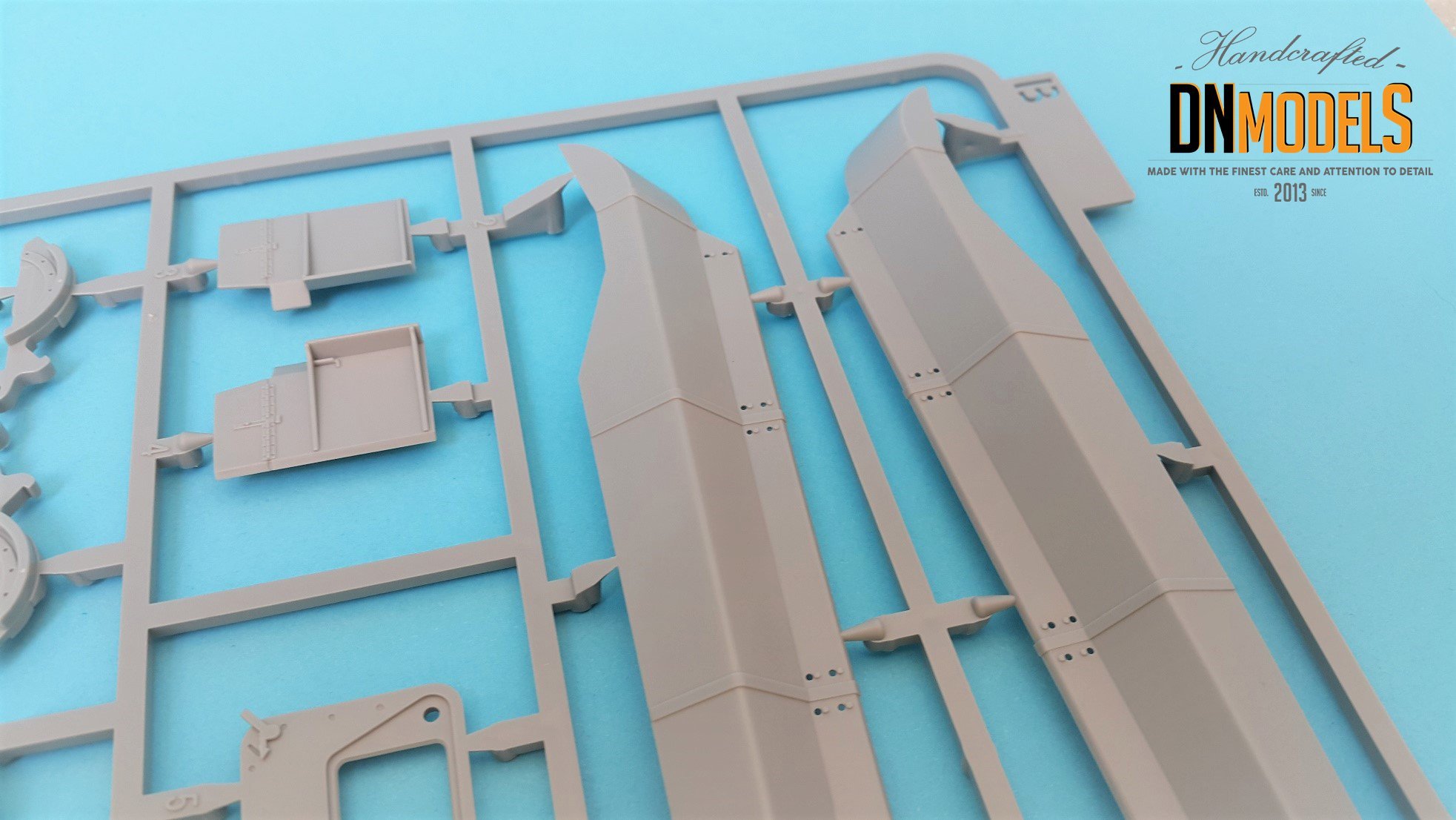 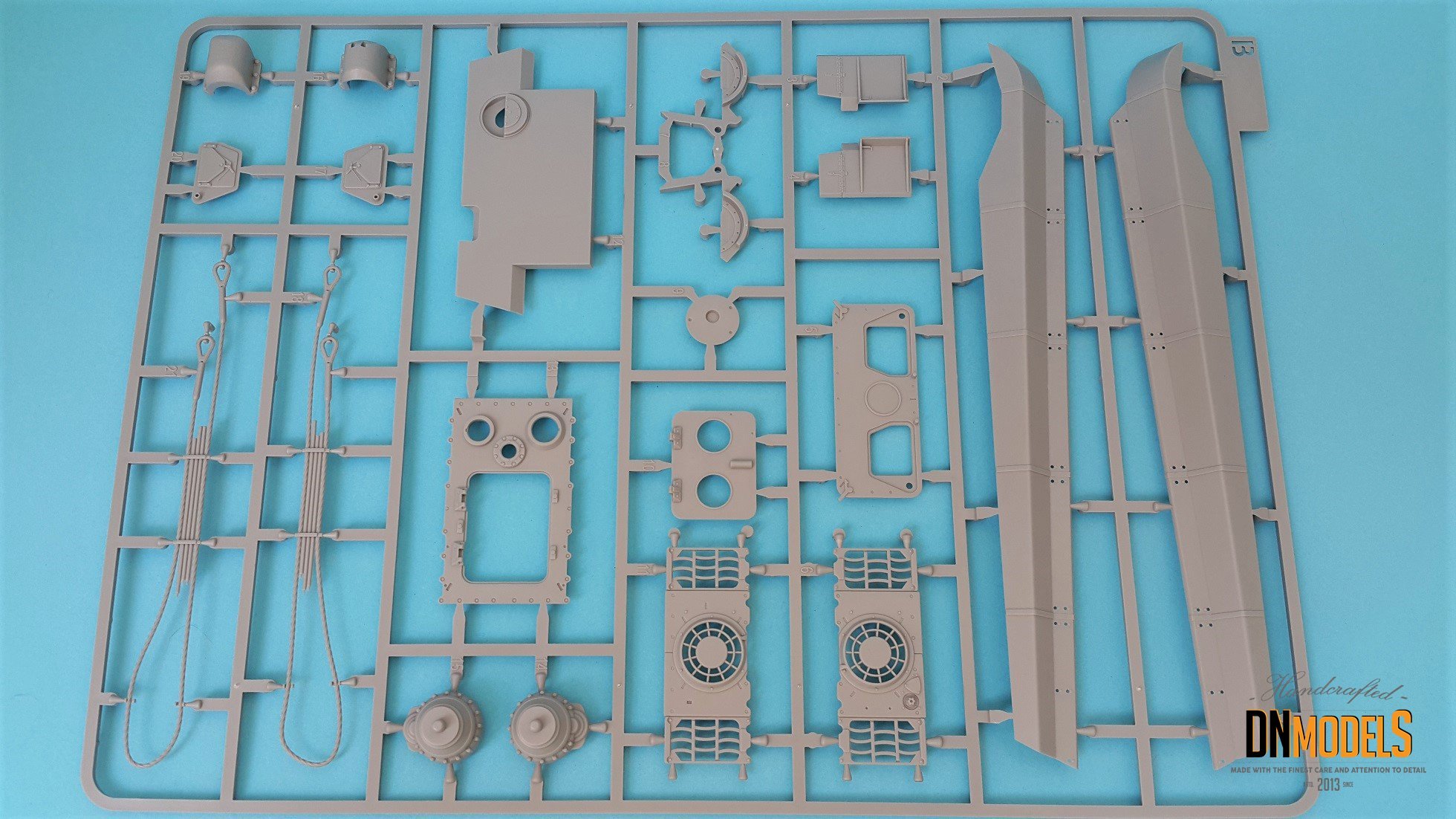 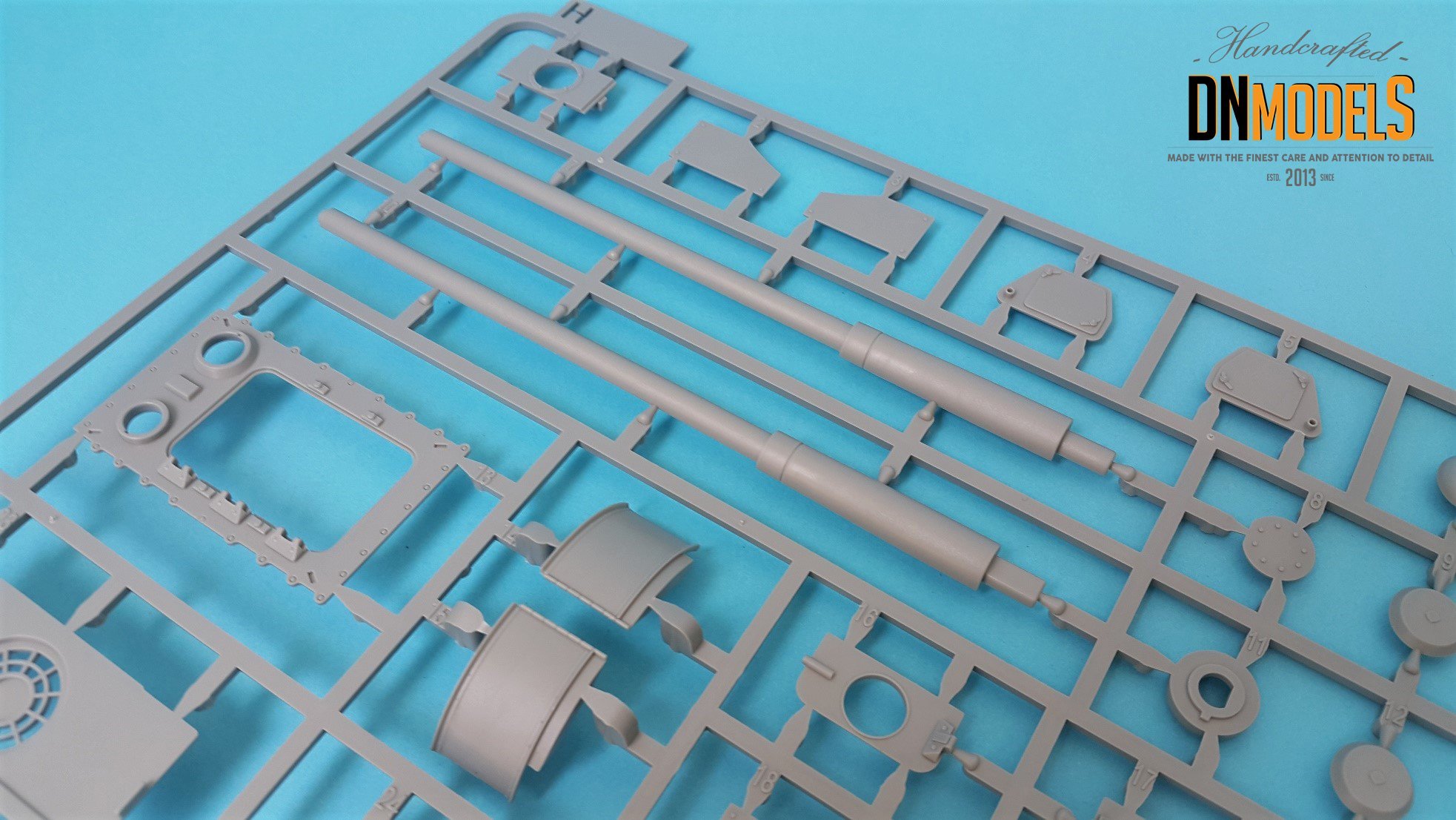 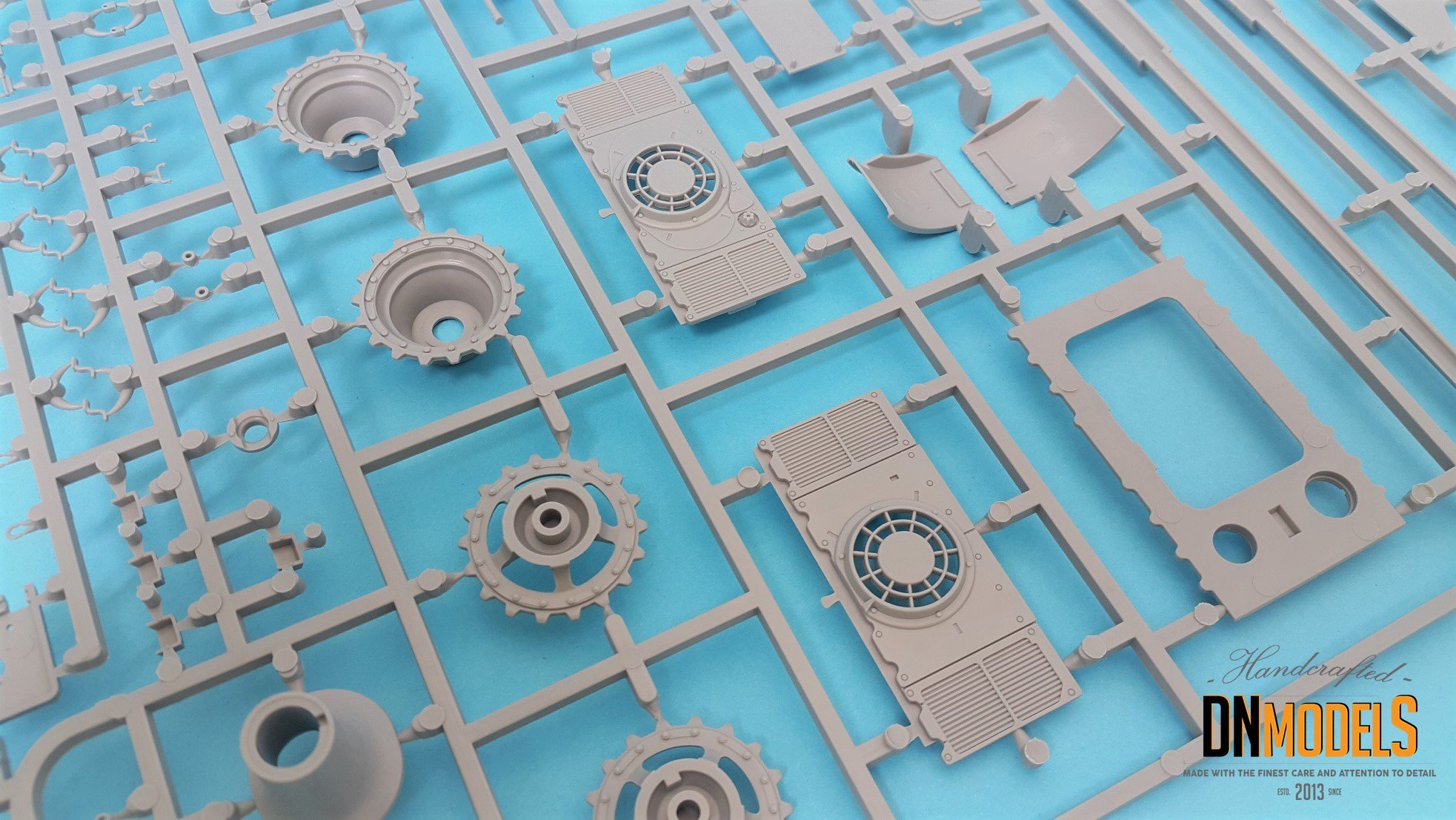 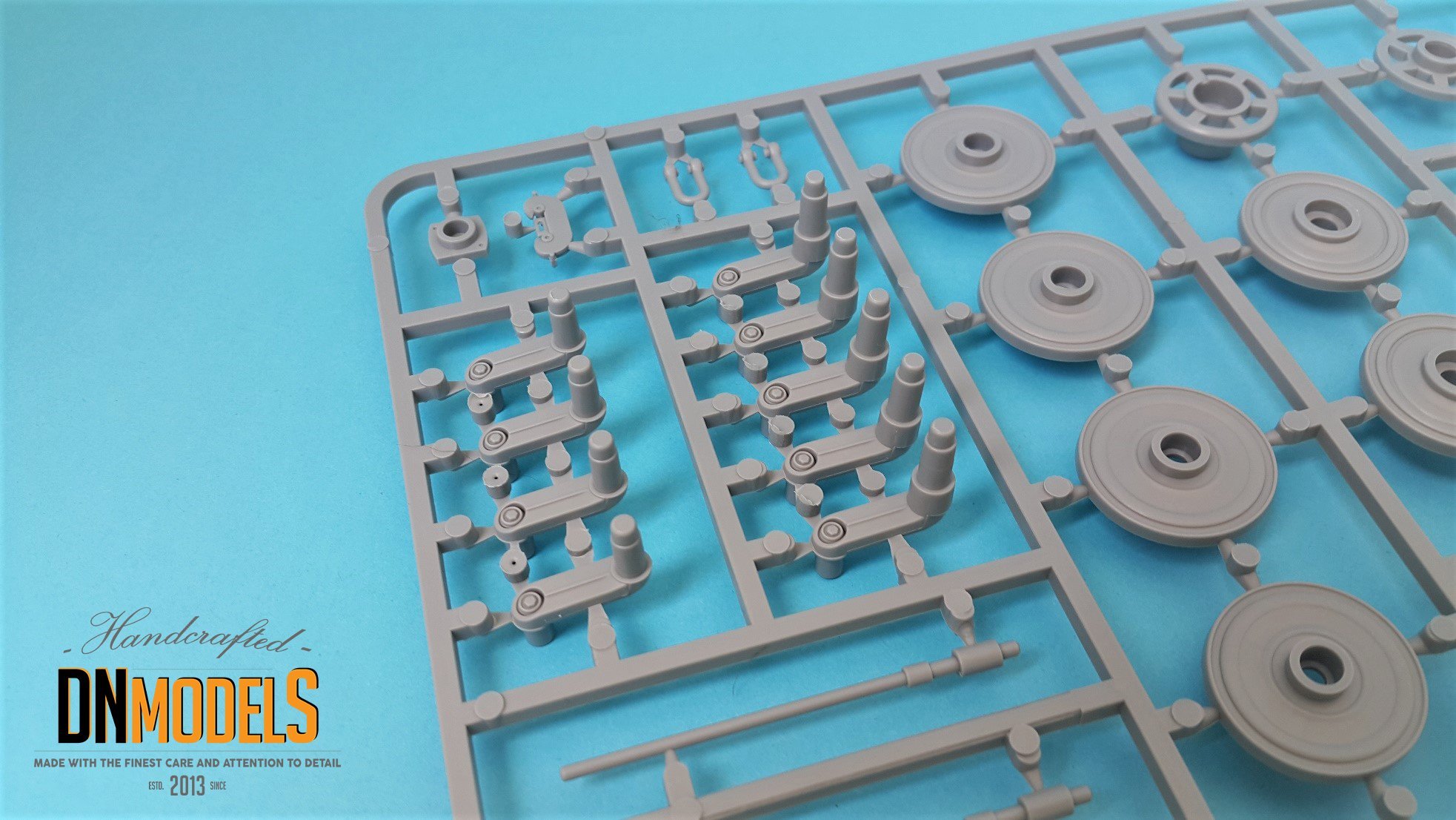 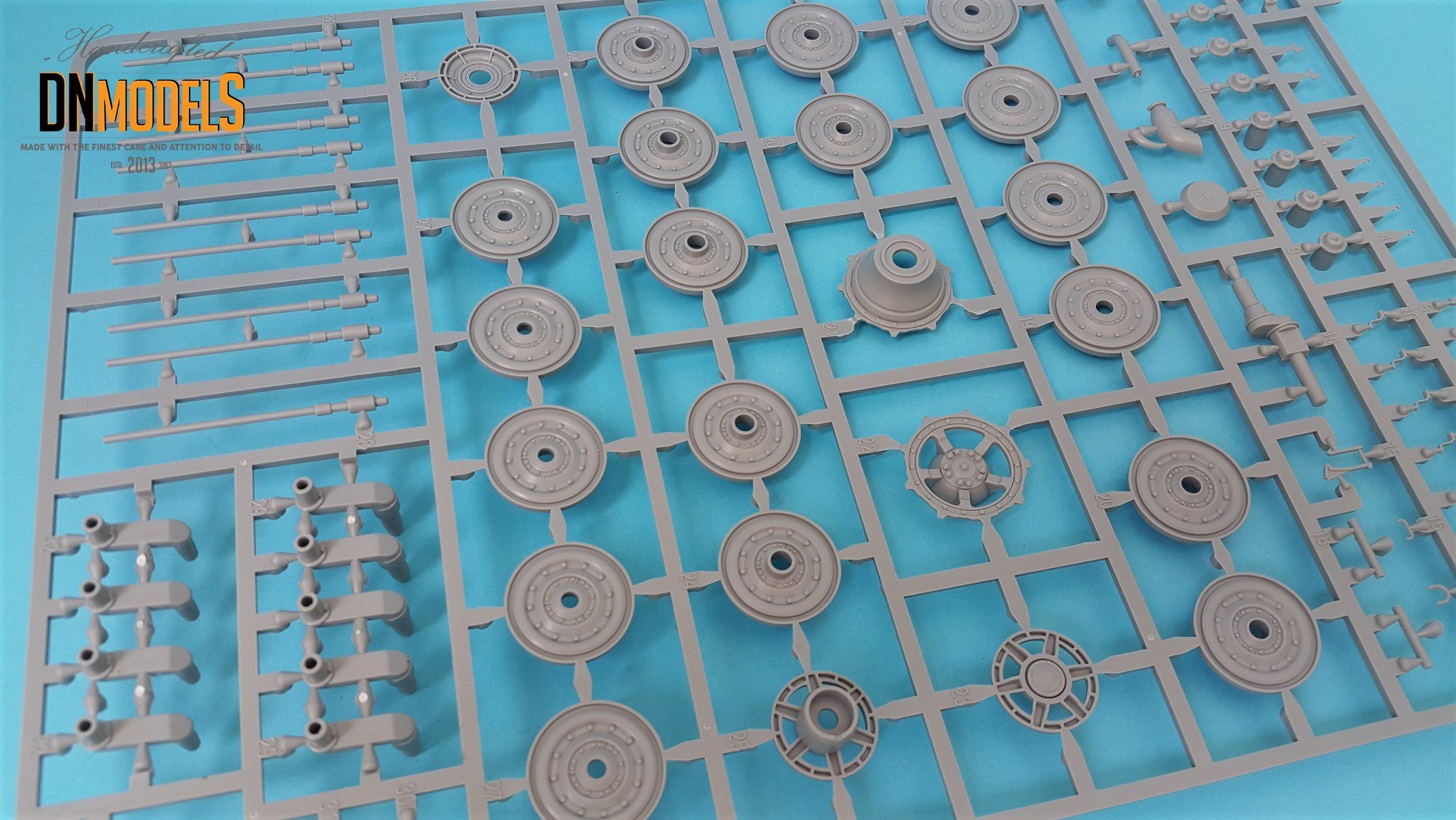 One very clever decision from the AMMO team was to change the tracks. King Tiger from Takom comes with separate links, similar as an idea to the Magic Tracks from Dragon. This of course, has its downsides, despite Magic Tracks being loved by many. Those downsides are the time consumed by the tracks, the problems that they cause for beginners and the fact, that they look exactly the same as link and length if installed properly. The only difference comes if you decide to make an unusual sag or if you go for a damaged tracks. 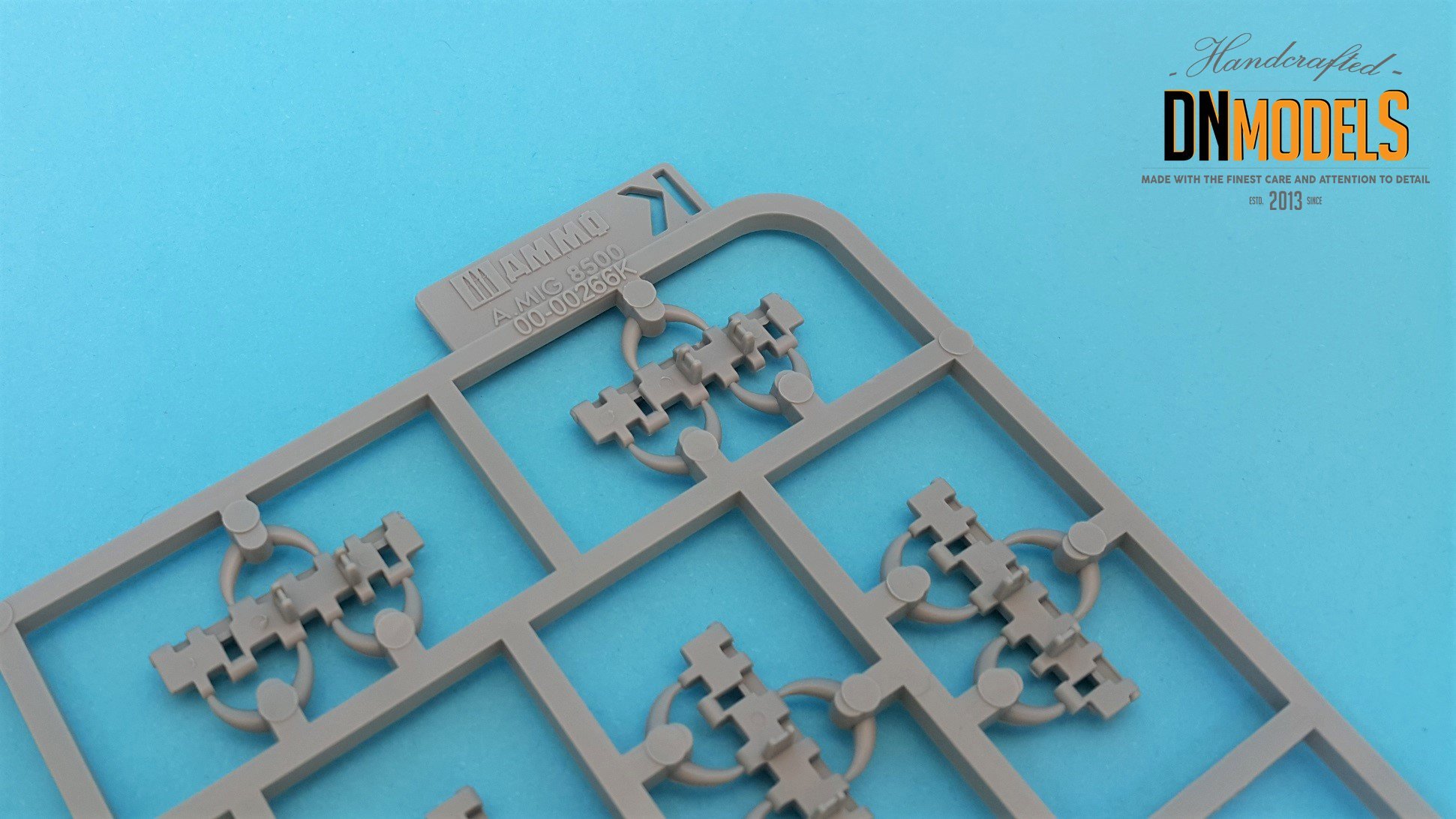 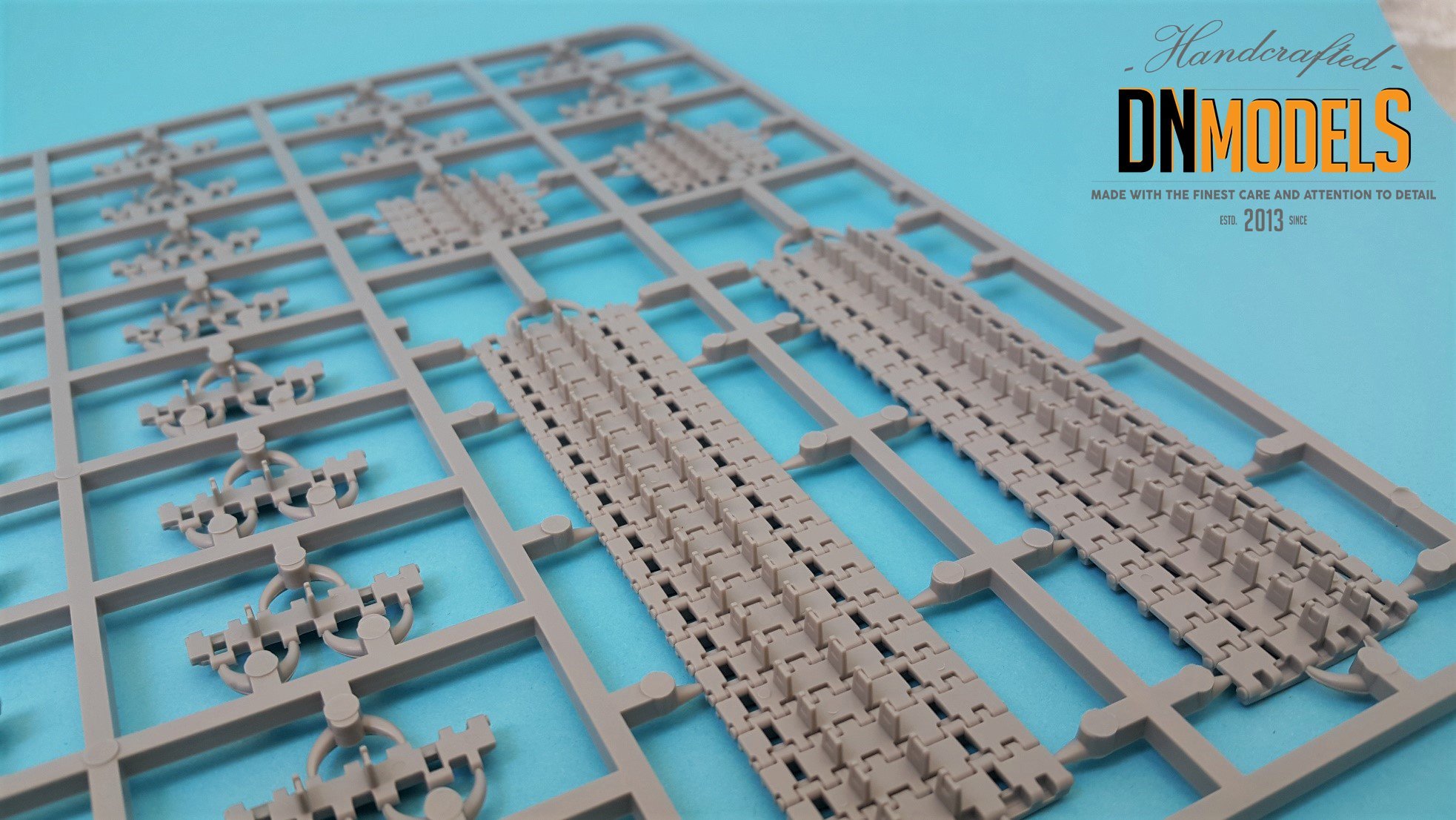 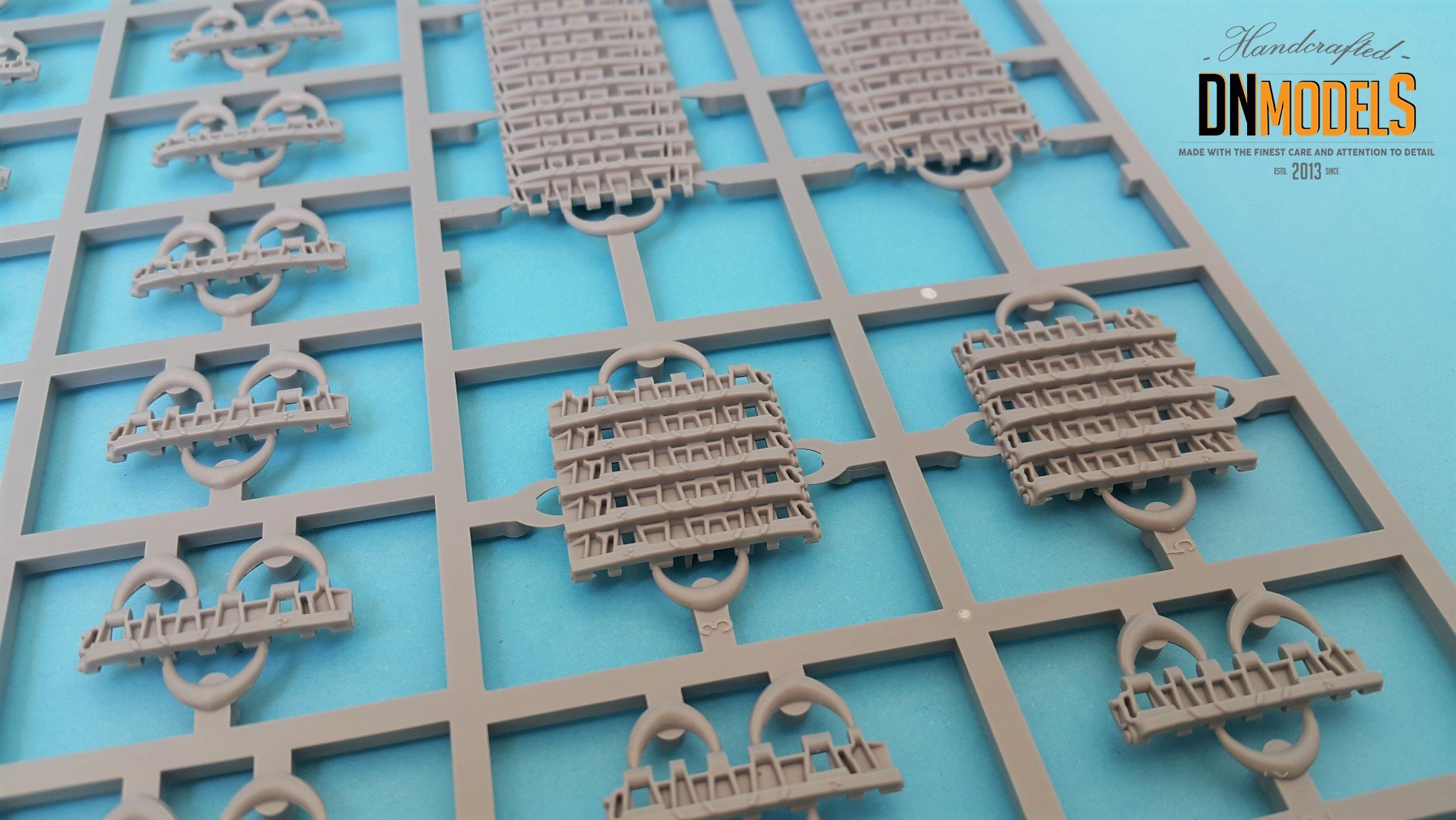 So to make this kit for a wider spectrum of modelers, AMMO team issued their own perspective of a sprue, with good looking link and length tracks, which looks quite nice. They do have some pin marks that needs to be cleaned, but so do separate links of Takom. 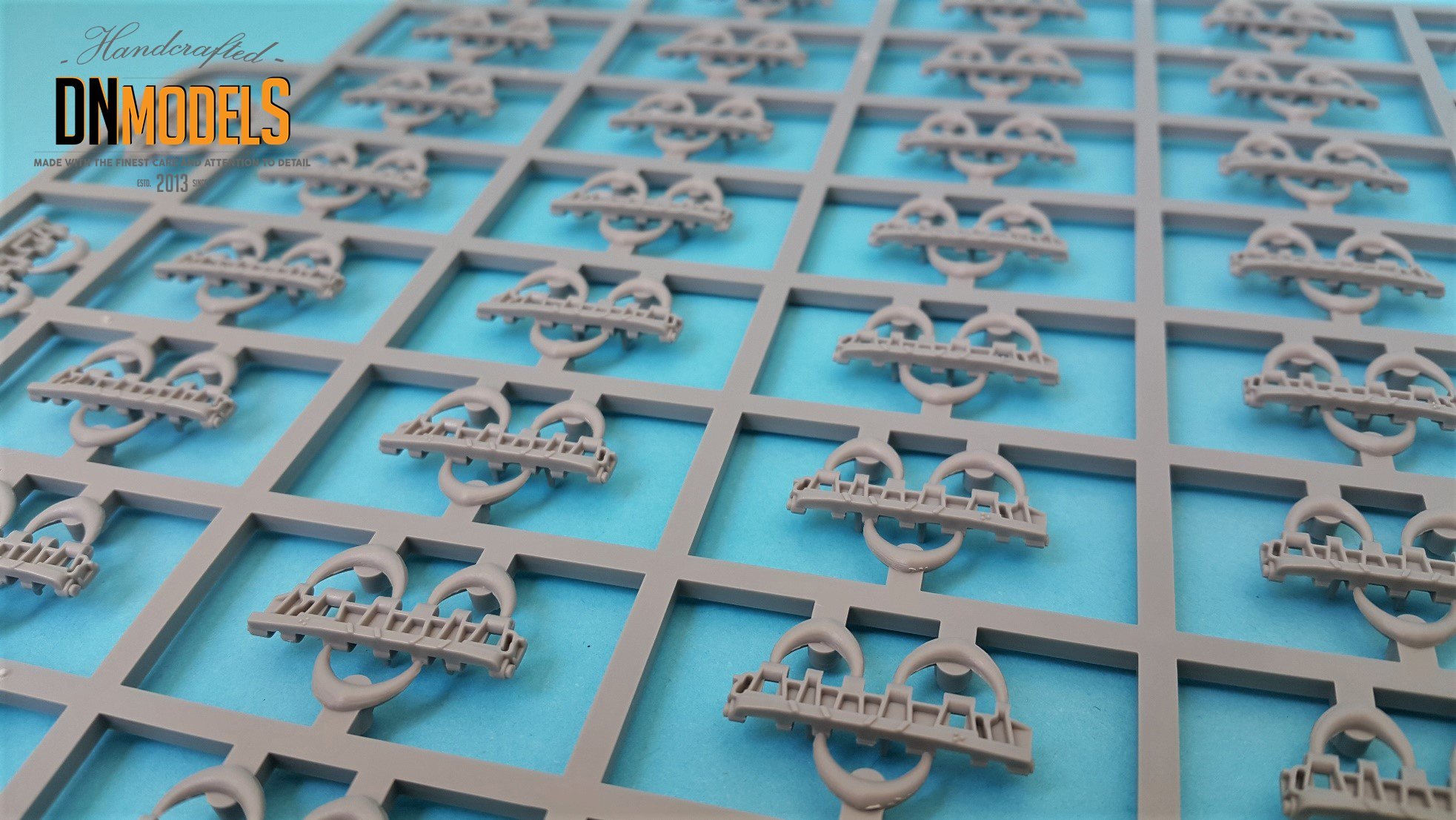 Once built those will provide good and realistic appearance of the tank and even if you decide that you won’t use those, metal tracks will be the best choice anyhow. They do provide the modeler with the best and most realistic look, although at a very high price usually. 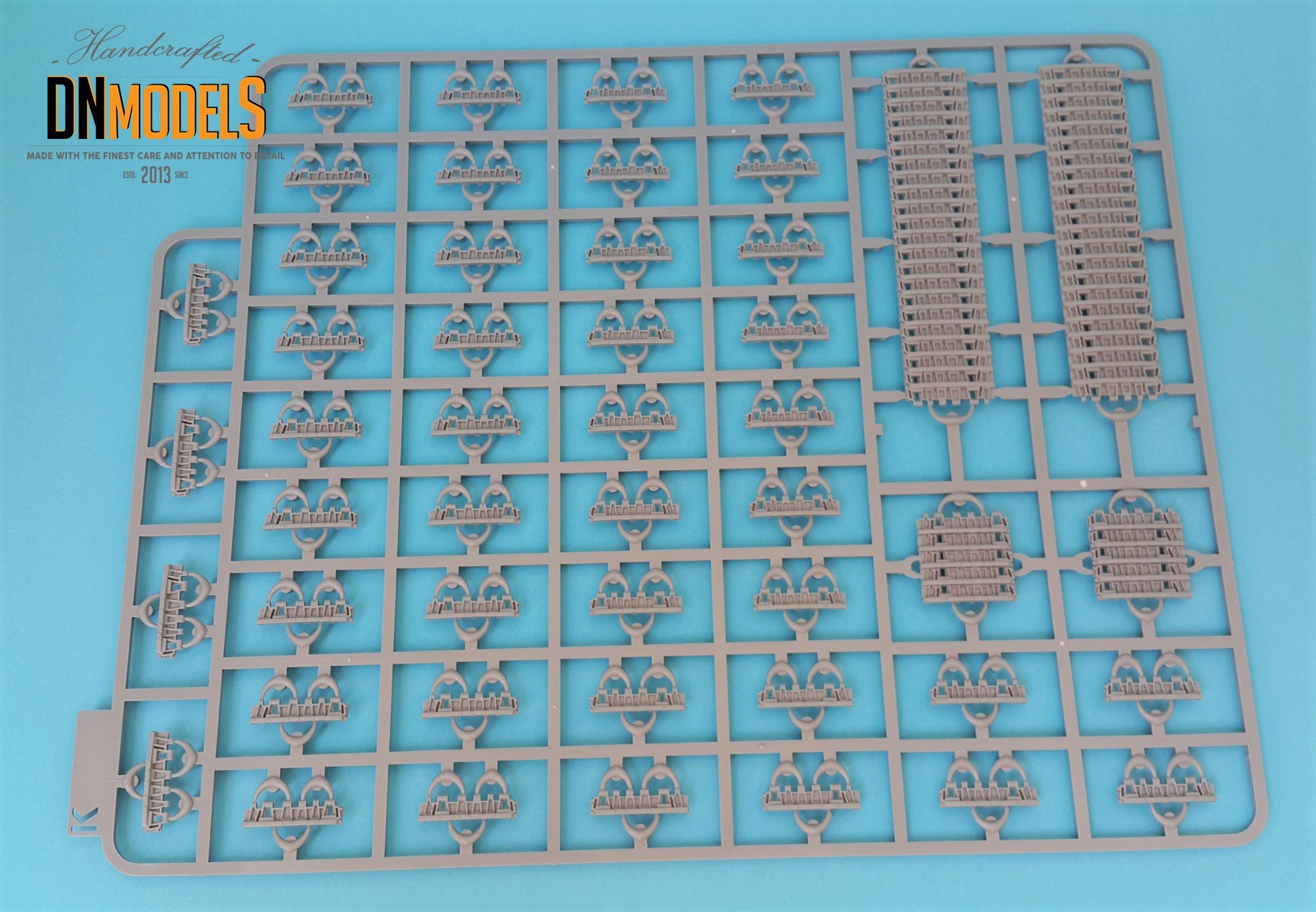 Photo-etch sheet is modest, featuring only three types of items. Biggest one are the round grills, pretty much a standard for most of the German armor kits. That was done on purpose I believe. The reason I suppose was that the kits from Takom, especially interiored versions are quite challenging and they can easily fire back at any beginner, making the hobby a burden, not a pleasure. Here, simplicity is the answer and I trust that MIG chose wisely.

The deal sheet features thin and nice decals. On the bottom corner of those there is the logo of AMMO, but I doubt that they are the producer of the sheet. In my mind it is either Cartograf, Takom or some other decal-oriented company. Whatever the case is, the transparent film is barely visible and it looks like the decaling will be troubleless. 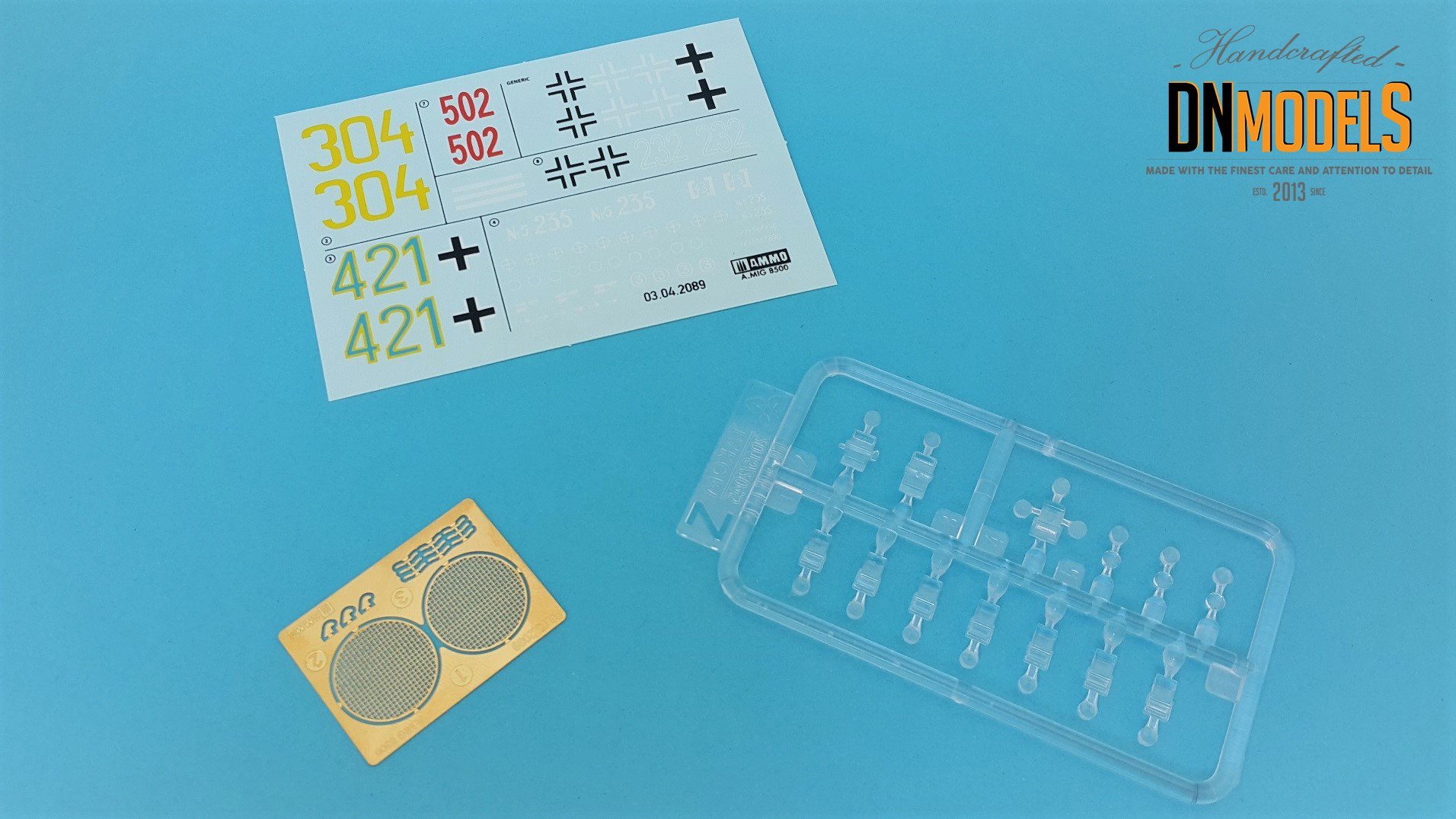 Clear parts are usually not an important sprue for tanks, since they are covered in mud, dust and with damaged outer parts, among which – the clears. Here we have a version that comes straight out of the factory, as well as some What If options, that can be done brand new. So the case is slightly different. The Takom clears are good and will do the job just fine if you decide to go for a virgin vehicle.

We have eight in total. They are embedded into one folding leaflet, equal in size and quality to the instruction sheet. The first four are tanks from March 1945. Second half are tanks from July 1945 variant, and since they are a fiction, all are featuring a logo “What If” in the bottom left corner of the picture.

The camo schemes are various in appearance, some new designs seen on Panthers in the last days of the war and some well-known and widely modeled versions too. Some of them feature different in color gun barrel, and this is a theme for many discussions, even internet feuds.

Many think that the gun barrels were in different color, but there is no proof of which was that exact color. Some think it was red-oxide primer, others – dark gray. There is barely any pictures of King Tiger from the last days of the war and unfortunately, there is hardly any hope that there will be more discovered. So it is basically the same as with the Zero fighter.

Zero fighter was an ongoing discussion for decades, for which was the proper green color of the Japanese plane, when at the end someone found for a fact that the plane wasn’t green at all. So, surprises of that kind aren’t impossible.

This is not a paper panzer and it is important to mention that. The July version or next version, was a tank that was ready on the drawing board and more. It was ready for production. There was estimates, materials, changes done on the turret and why. Everything was about to happen, and it probably would’ve if the war didn’t ended.

That is why, the version here is an object of small discussion among King Tiger fans. They do consider the front upper armor plate of the turret slightly off, since it should have been done with bulge in order to accommodate the larger gun mechanism.

Since changing the sprue of the Takom tank is hardly a possibility, and adding a whole new turret is very cost ineffective, AMMO decided to go with what is at hand. At least this is what I believe. Probably more options are planned, that is why we have AMMO sprues included, but since the tank is What If, I think the turret is something we can live with.

This is a kit that will suit everybody in my opinion. It is good for beginner modelers, since it presents a modest photo etch sheet, simple camo schemes /not typical for German Armor/, lacks interior and it is a straight-forward build with small number of parts.

It will also suit the advanced modelers, since it is accurate and features interesting paint options that will require attention and a master modeler can even get the most simplistic one – basic red oxide primer – and turn it into a modulation miracle.

It also provides you with the FG 1250 infrared and additional gun barrel, so you can deviate slightly from what is popular and go for a What If version, which will be a definite show-stopper.

The kit comes as a Limited Edition and that is the most important thing. You can always get it, stash it and use the basics included to build a Takom version with the knowledge provided. Keeping the Limited Edition intact is a good collector’s item and that isn’t a bad option too. Many modelers are actually collectors of boxes anyhow.

There is more to that kit than a basic King Tiger set. MIG and AMMO team put a lot of devotion and effort into making Takom set suitable for a wider audience, with a touch of knowledge and love. King Tiger is definitely a great subject, one of the most important ones when it comes down to tanks. In that manner AMMO 8500 is a kit that every German Armor Fan must have.