Italery’s MiG-23MF/BN in 48th scale is the latest announcement to come from the Italian model maker. Just recently, we discussed MiG-23BN from Eduard, which supposedly should’ve been very cool and neat Limited Edition set. But not exactly. The reasons for that are many and probably they all apply to this Italeri upcoming release of the MiG-23MF/BN combo. With this start, one might feel already somewhat disappointed on what is coming next in the article. And to some extent – yes, the news are not exactly news and overall what you’re about to see is not good.

Italeri’s MiG-23 is an old tooling. There was quite a few releases of it before and there is nothing surprising about this set. The price is OK, the plastic is not bad and mostly what you get is typical 90s Italeri feel, which even though not sophisticated, is still pretty good. However in 2019, a re-release of a not-so-decent kit in 48th scale and of such an iconic jet fighter is a sin.

MiG-23 is considered by the critics as a gap filler in between MiG-21 and MiG-29. That is very far from the truth. MiG-23 was a success in many aspects, latest variants of which were competitive to the first MiG-29 variants. The reason for the bad name that MiG-23 received was the fact that the Western World clashed with its third-world variants, which are downgraded and were flown by ill-prepared pilots.

Another reason for MiG-23 to be easily forgotten is the fact that many Eastern European Air Forces dumped it, to keep MiG-21 instead. The reasons for that were purely economical and are considered as a very wrong move made under the financial pressure of the transition period. No, MiG-23 was not less capable fighter or bomber than the MiG-21. But it was tough to be maintained in worthy condition. Expensive too.

Trumpeter made an attempt to start a new line of MiG-23, both in 32nd and 48th scale, but that was a miss. Their kits have major flaws and shape-wise they were almost a disaster. Compared to Italeri and this upcoming kit of MiG-23MF/BN they seemed superior at first glance, but in reality they weren’t. What is important to know about MiG-23 that Italeri offers is the fact that it is more accurate in many aspects compared to Trumpeter’s release. 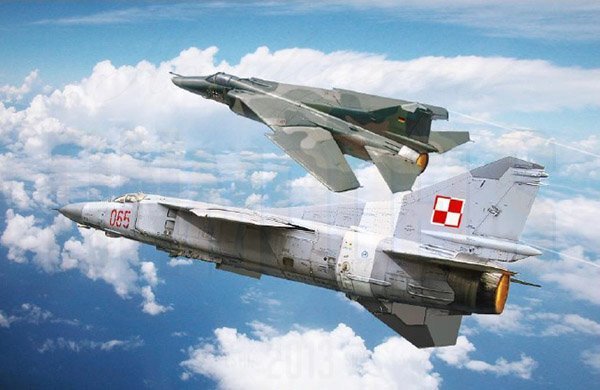 If you wonder why such a combo: MiG-23MF and BN, here’s to clarify. MiG-23MF that comes from Italeri is almost perfect if you want to do a conversion to the BN variant. The reasons for that are many, but comparing some decent drawings it appears, that Italeri’s tooling, is brilliant for such a purpose. It is true, that it lacks the rivets and some of the panel lines need to be altered, but for modelers who are not scared of those modifications, Italeri’s MiG-23 is probably the best and the most accurate kit to become MiG-23BN in quarter scale.

What Italeri are about to release with this kit in terms of the nose section of the MiG-23BN is another thing and still uncertain. However we are about to find out soon enough. But the rest is pretty much OK, especially if you’d like to spend some time riveting and doing panel lines over the kit. Especially with the fact that there is no alternative. Or the alternative is not good enough.

Another thing to consider is the variety of options included in Italeri’s set. You are getting two-in-one set and with various markings. Actually, the boxart was changed from its original look for whatever reason. First the announcement featured Polish MiG-23MF which is one of the most famous light-gray schemes because of the white stripe on the tail section. Then that was changed from the picture above, to what you can see in the title picture of the article. Was that done for some political, copyright or artistic reasons is a mystery. The first option was better in any case.

Whatever might’ve caused the change, the kit will feature plenty of options. Including the Polish one, as well as East German and Luftwaffe. And after all, whatever Air Force you might want to recreate, you can easily find decals or masks, but you can never substitute the accuracy of the plastic. Apparently, despite its age, with the Italeri’s MiG-23 we have strong competitor to the Trumpeter kit. And for the accuracy maniacs it still presents the better option.

That is the saddest part though. So many decades have passed and we don’t know if we’re going to get a decent MiG-23 in any scale. More than 5000 were produced, very close the the mighty F-4 Phantom, but despite that the Flogger never came close in terms of fame. Pity, because it is a really beautiful bird. It looks aggressive and with its sweep wing technology it was an icon for its time. Some consider it the best MiG ever made. And maybe they are right.