Hasegawa F-104 in 48th scale is a tooling that needs no introduction. It is widely used, repacked and respected tool of the Lockheed Century fighter, still unbeaten in the scale. The kit was recently repacked by Eduard in Bundesfighter, NATO Fighter and Bundes-NATO editions.

In 2017, Italeri announced F-104G with special livery, which was speculated to be a new tooling, but subsequently appeared to be another repack of the brilliant Hasegawa kit. It was surprise and somewhat disappointment, since the market begs for a new Starfighter for years now.
Hasegawa tooling is great, but has its flaws, which supposedly DACO fixed with its upgrade sets, however, at a relatively high price.

Italeri boxes were always colorful and pleasant for the eye. This one is no different. We have the Ferrari F-104 flying together with another spectacular scheme /Flying Witch/, both from the late 80s. Although Starfighter and its ultimate variant – F-104S – flew in Italy until 2004, this kit gives us older variations of the bird.

On the front cover we have an info box from Lockheed Martin, Aeronautica Militare as well as the Super Decal sheet info, which is typical for Italeri. Quite an eye candy. 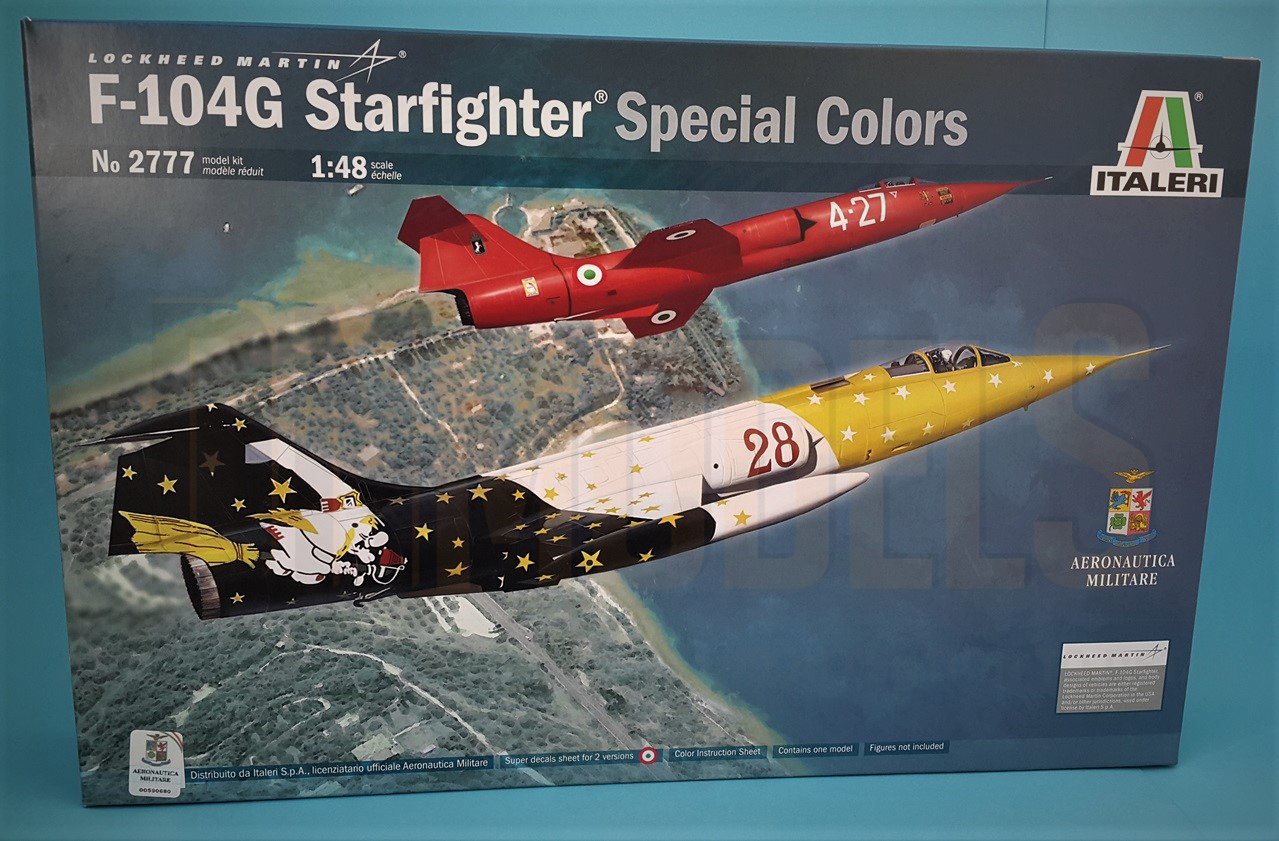 The box is made from soft materials and cannot be compared with Eduard, but it is better than Revell, both companies that sell different repacks of the same kit.

On the sides everything is in color with profiles too, so no complains about the quality or appearance. It might not be the best, but it is rather good compared to the rest, especially in that price range. 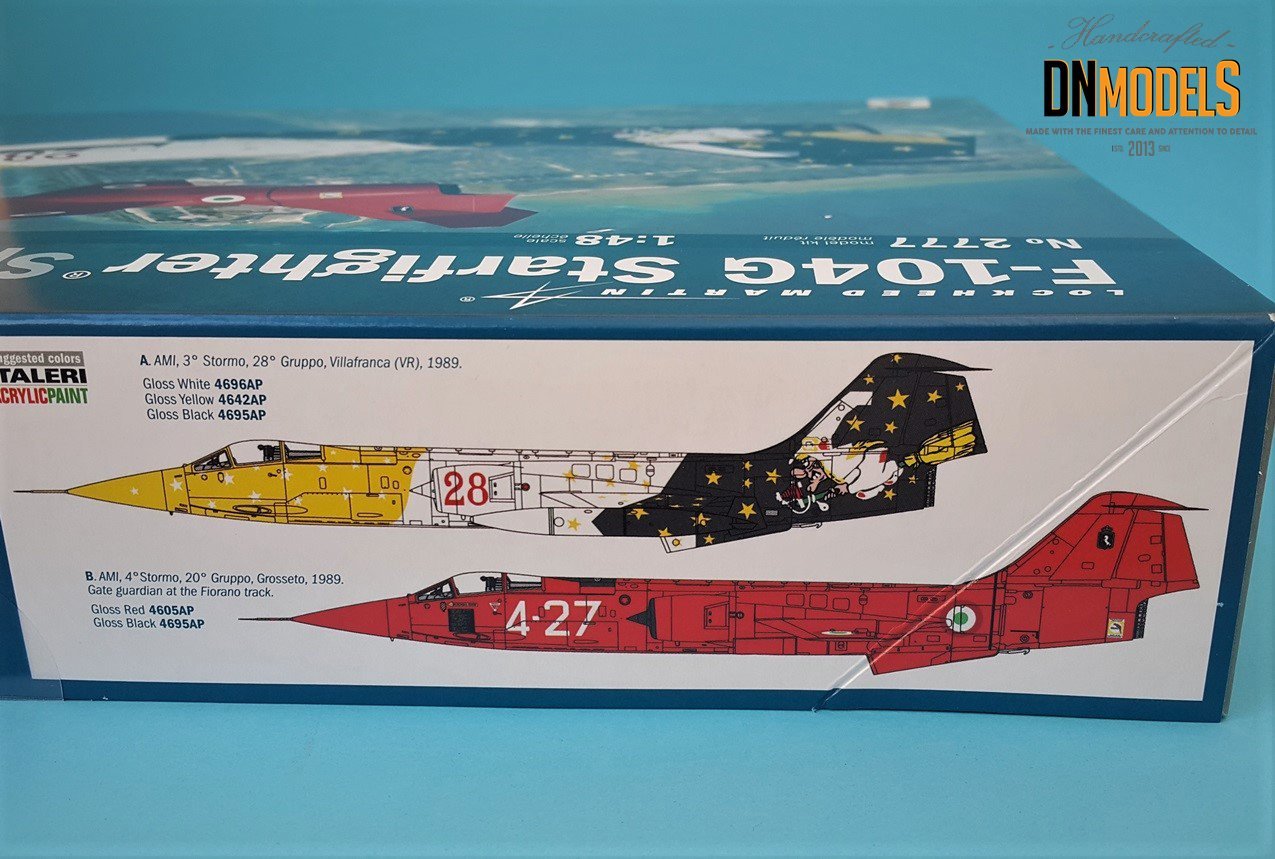 They are simple, a bit robust in appearance I might say. Italeri never did what Eduard does with their instruction sheets. The build is pretty simple, but I believe that Italians, could’ve done better with the color schemes, which are pretty rough and basic.

All is incorporated into one foldable paper format, with color schemes being in color, but far from satisfactory for 2017 release. I should add here, that this is one of the very few lows of this packing of the Hasegawa F-104. 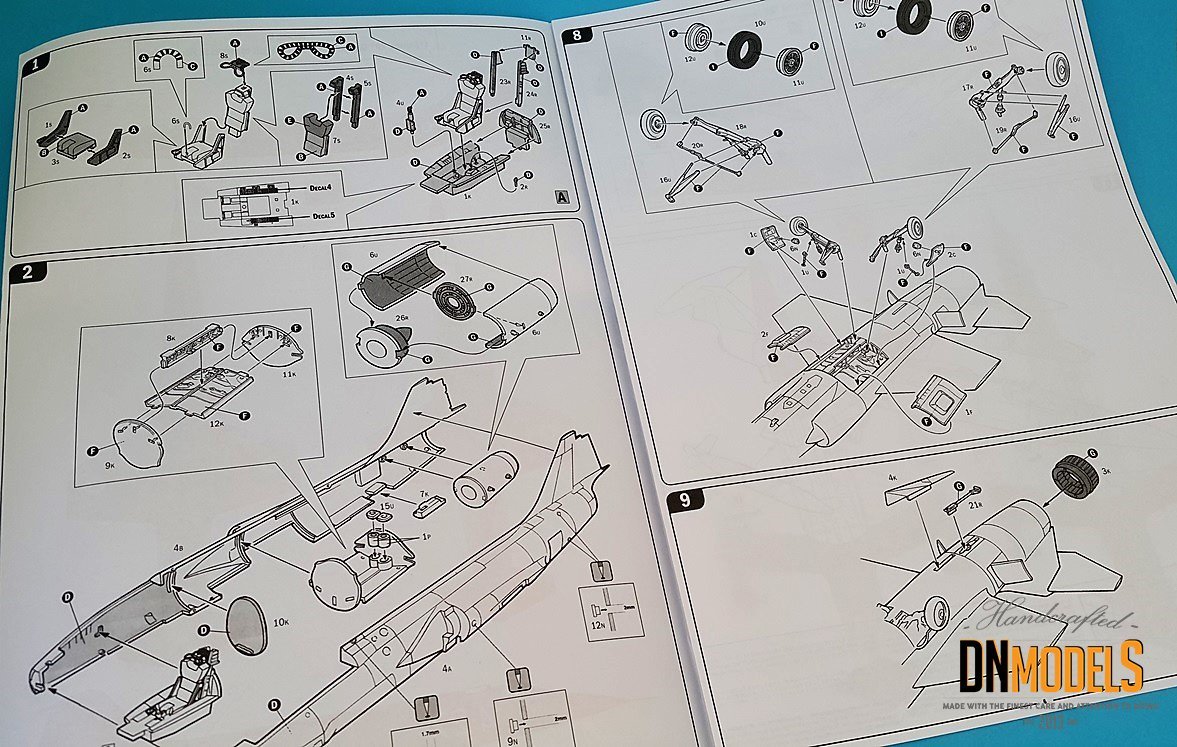 Hasegawa sprues have been repacked many times before. Here, as well as with Eduard, we have an info note that the kit was made in Japan, but imported by Italeri /with Eduard it says differently of course/. Very important to know if you want to be sure that you have the proper Starfighter tooling. Others available on the market are far from that quality here.

Sprues come in a big envelope, all together, beside the clear parts which are packed separately but again, inside of that same big bag. This looks a bit obsolete, but again, it is an old concept of a kit. 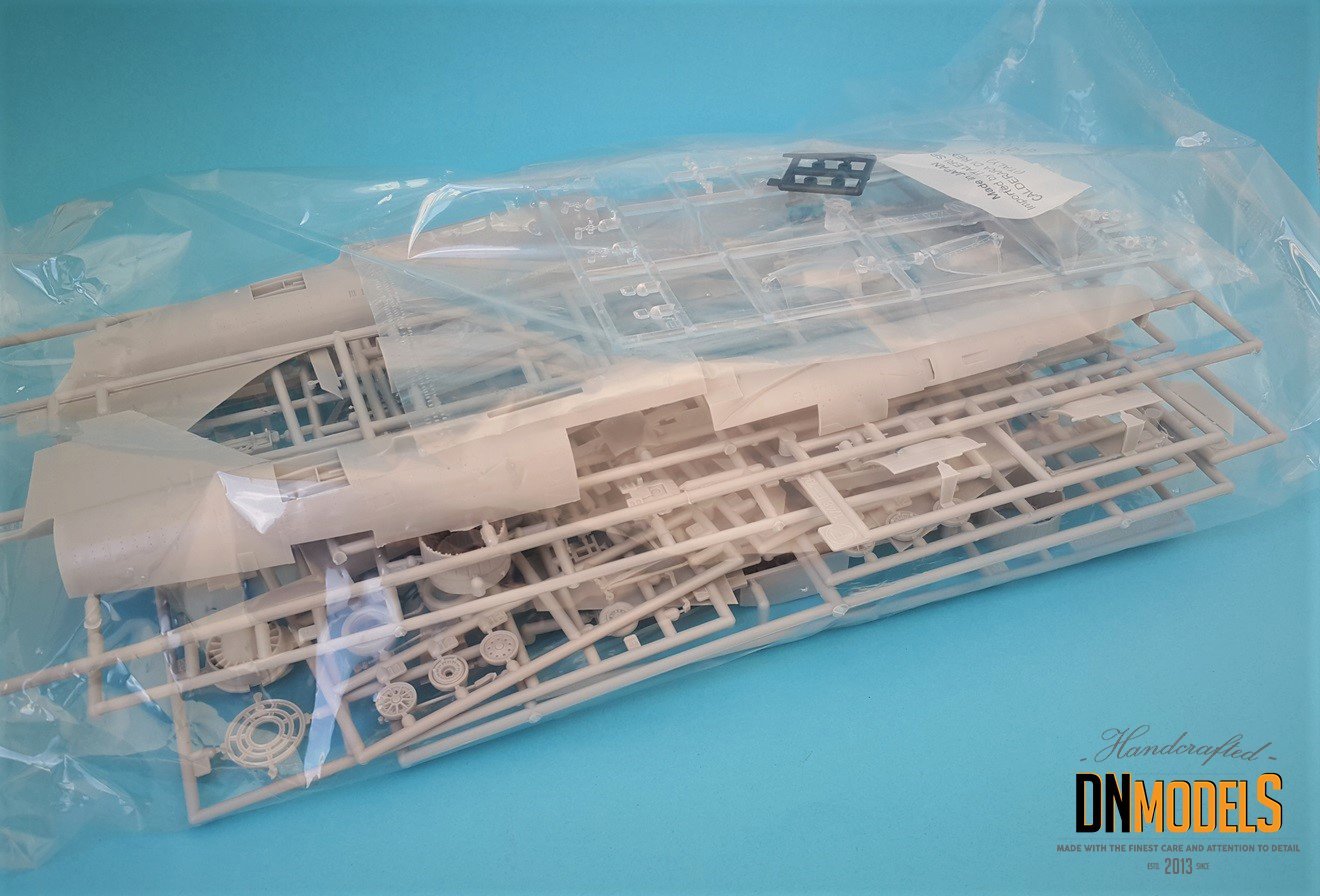 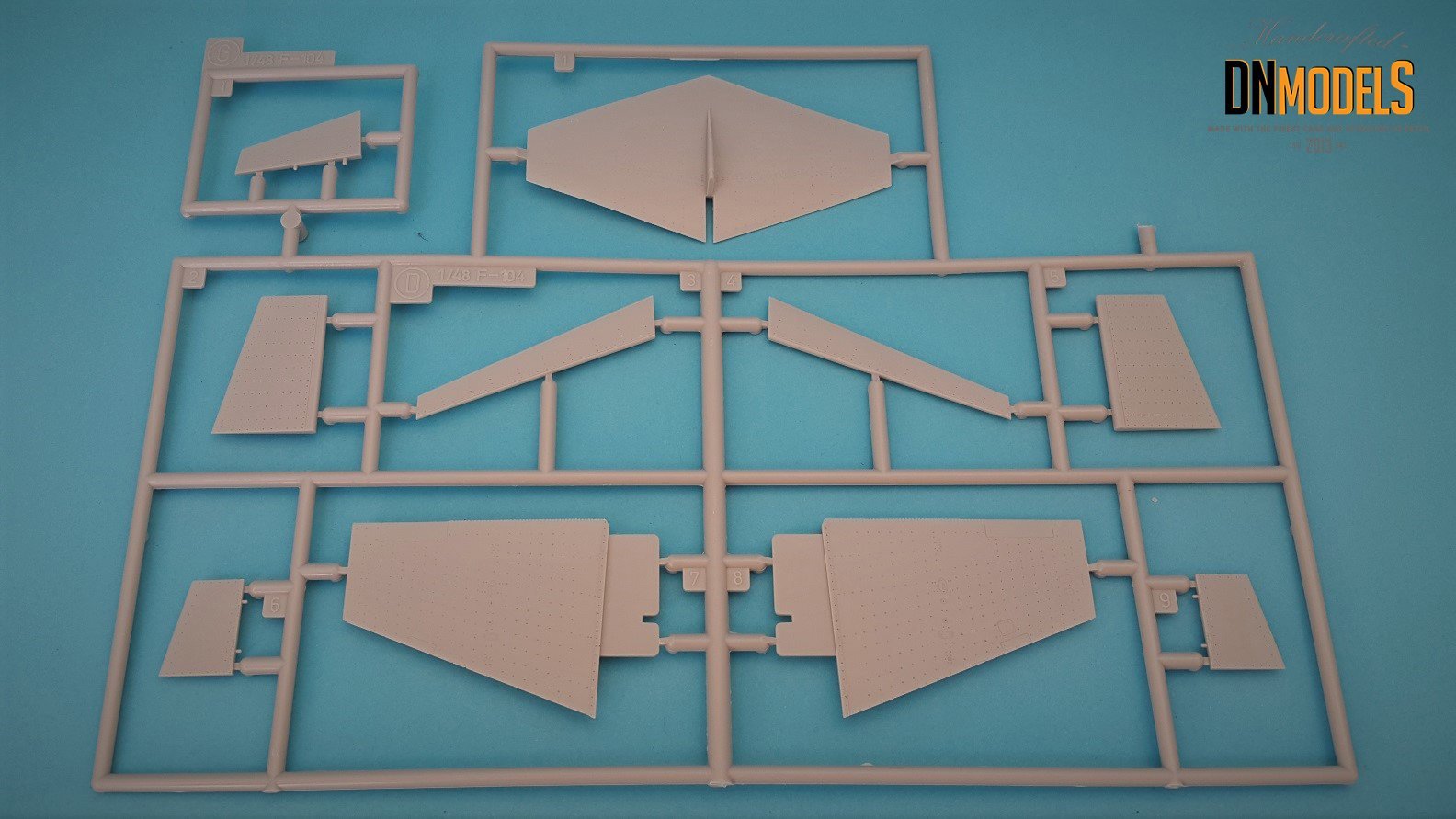 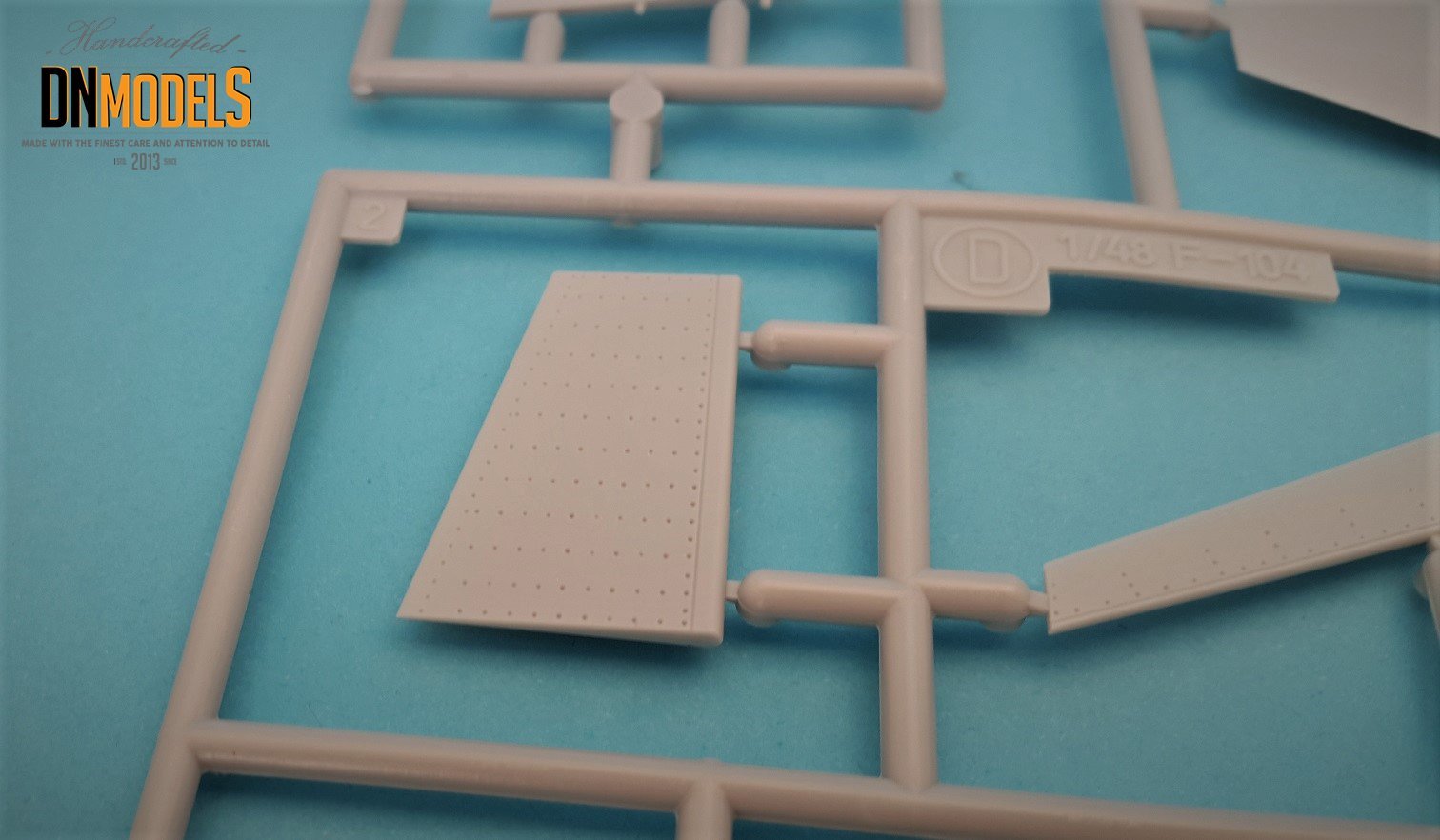 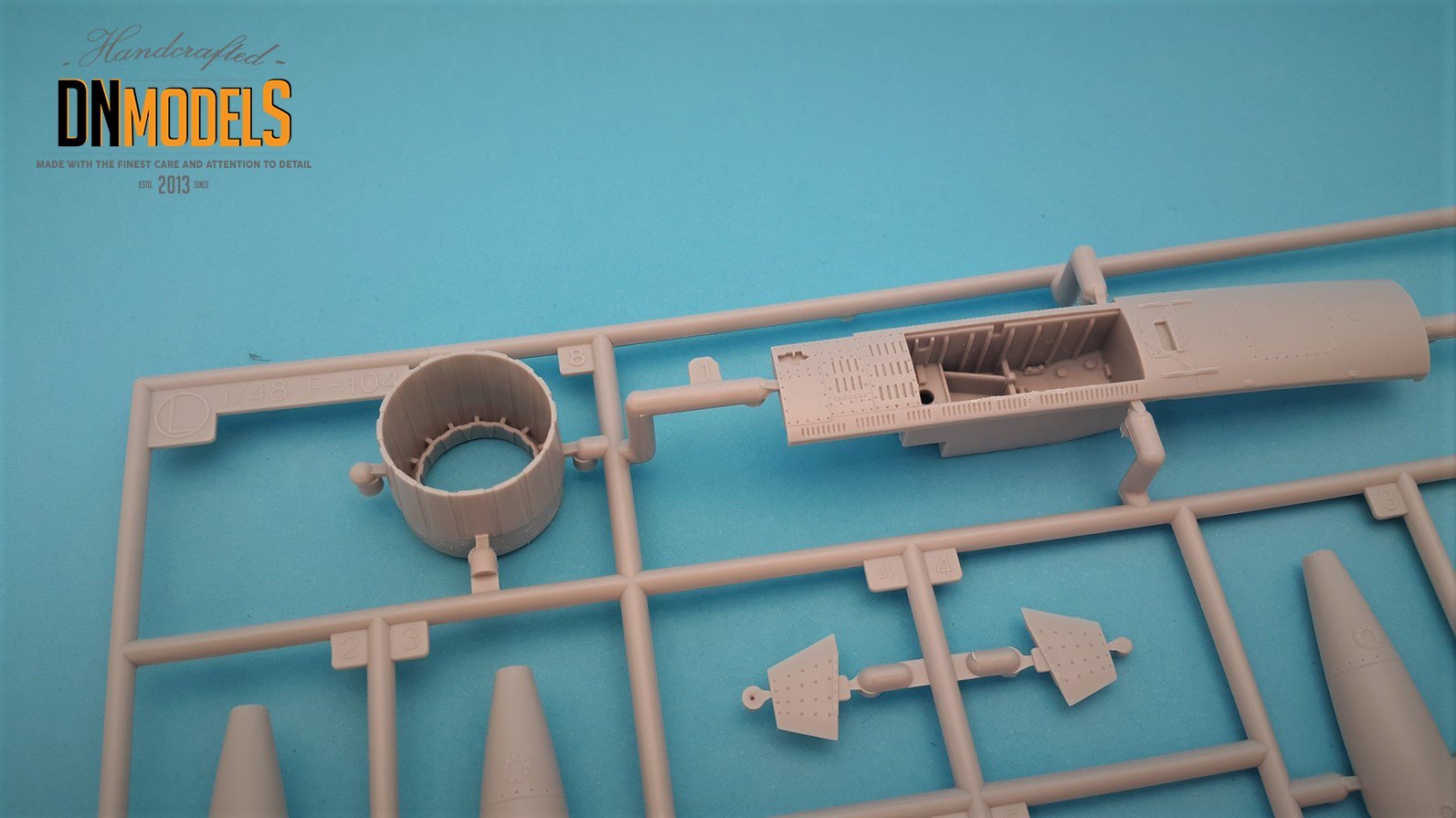 We have light gray plastic and the detail that we all know quite well and respect. Hasegawa might be aged, it might feature too many useless rivets on the wings, but it is still the best Starfighter in any scale. Japanese quality here, wrapped in Italian fashion.

Some parts show some flash, which was inevitable for the time that this kit was initially created. Other than that, everything is pretty simple and straight forward, easily doable by unexperienced modelers, as well as suitable for the masters. 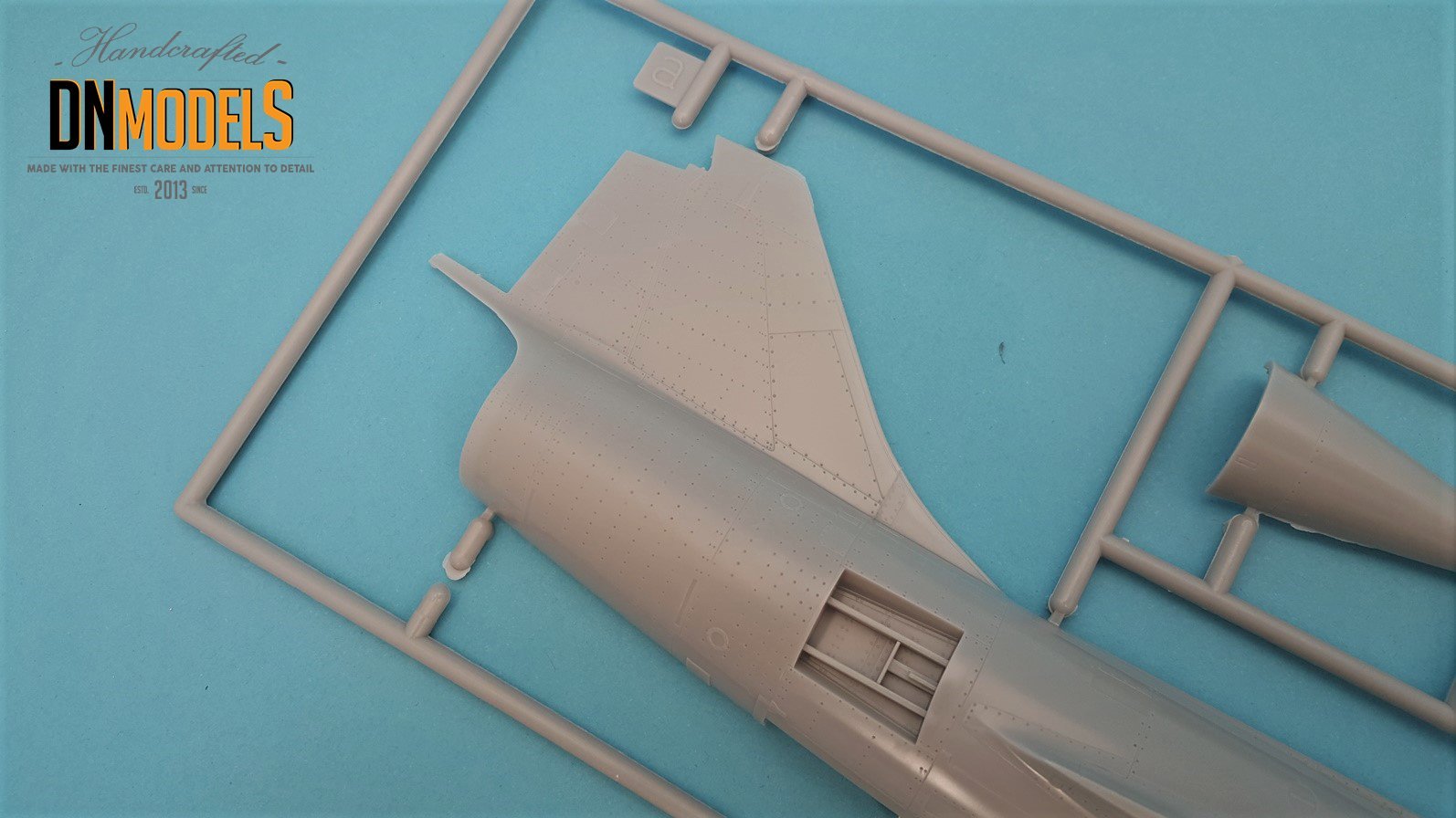 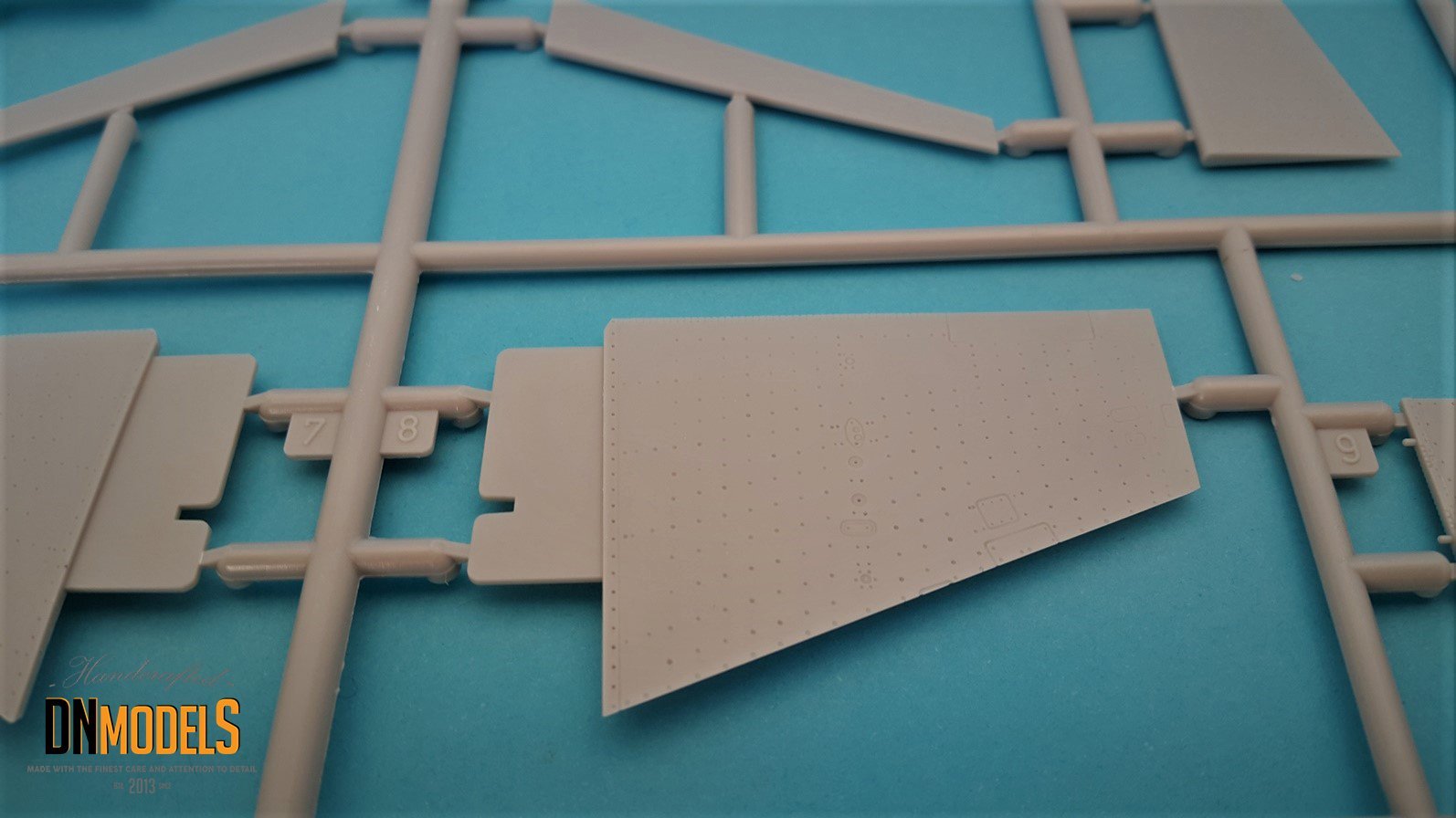 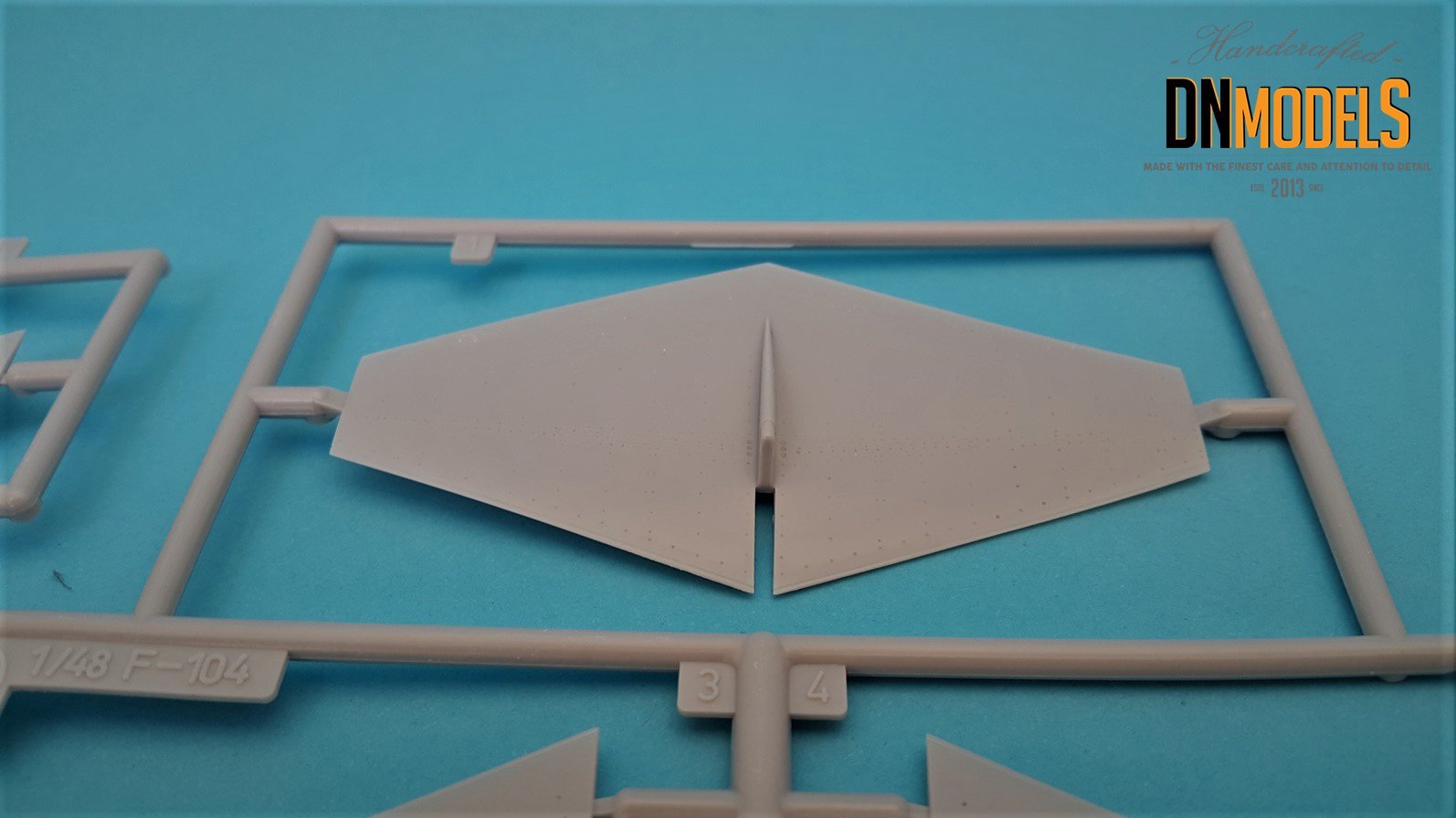 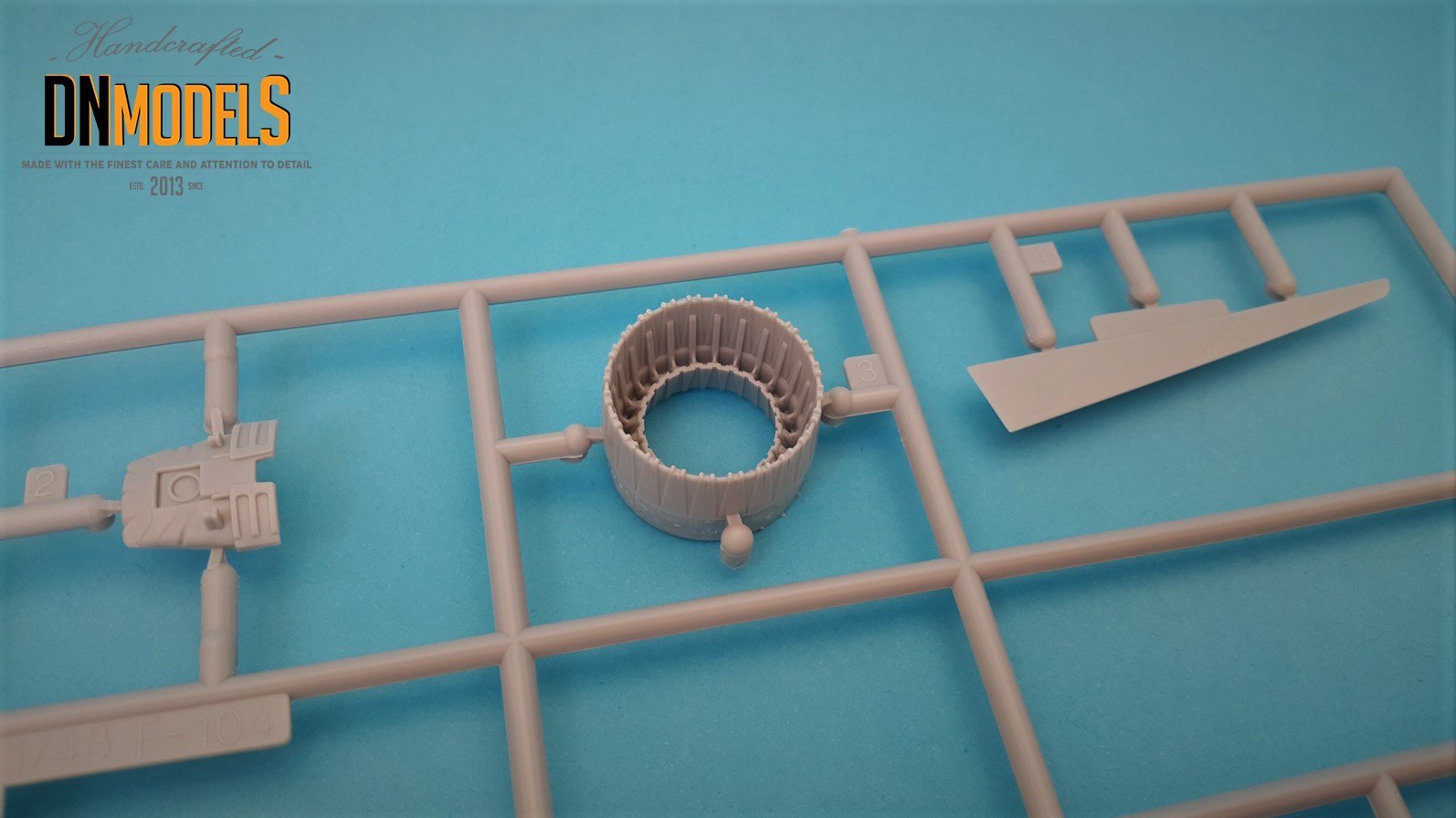 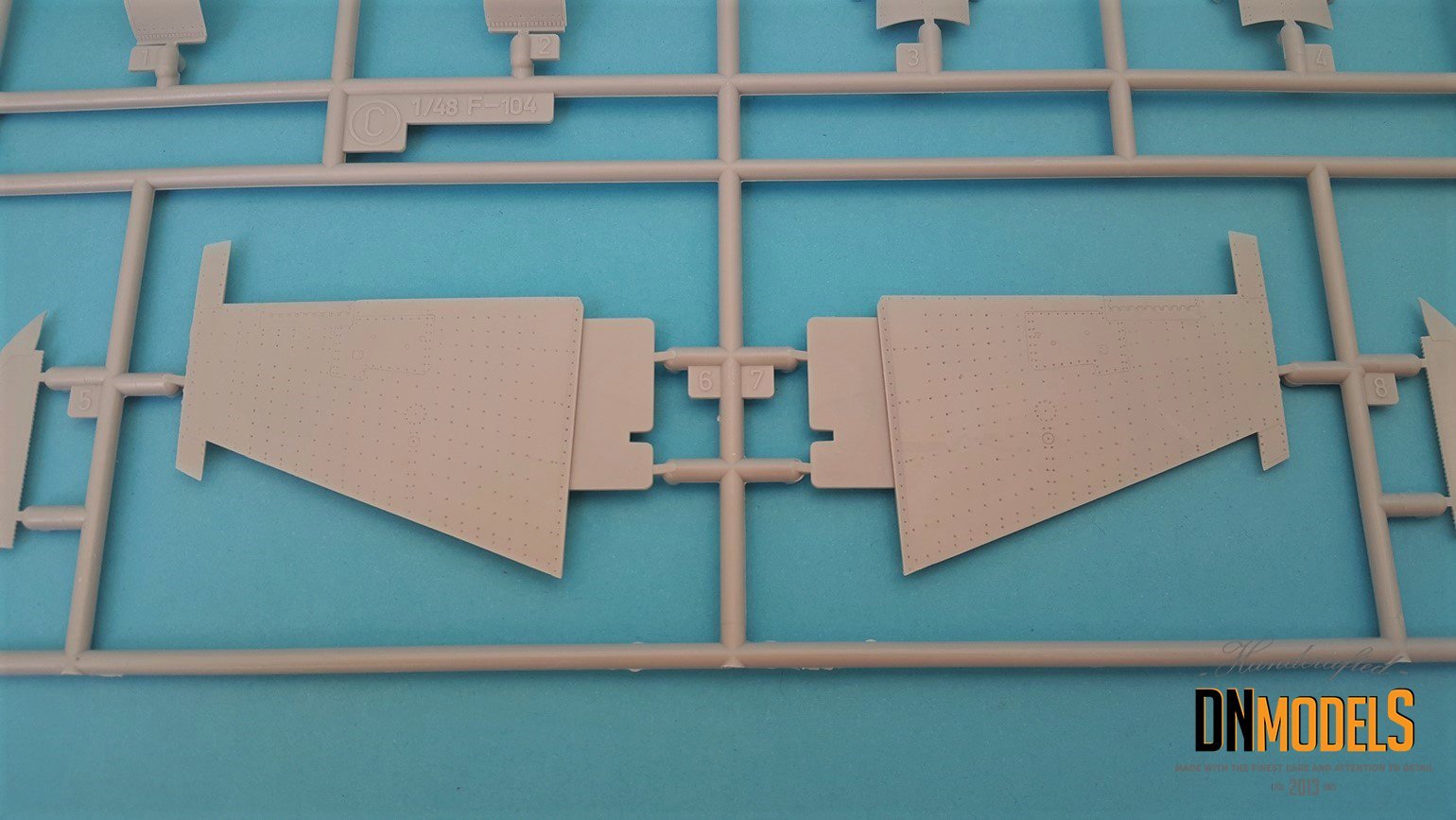 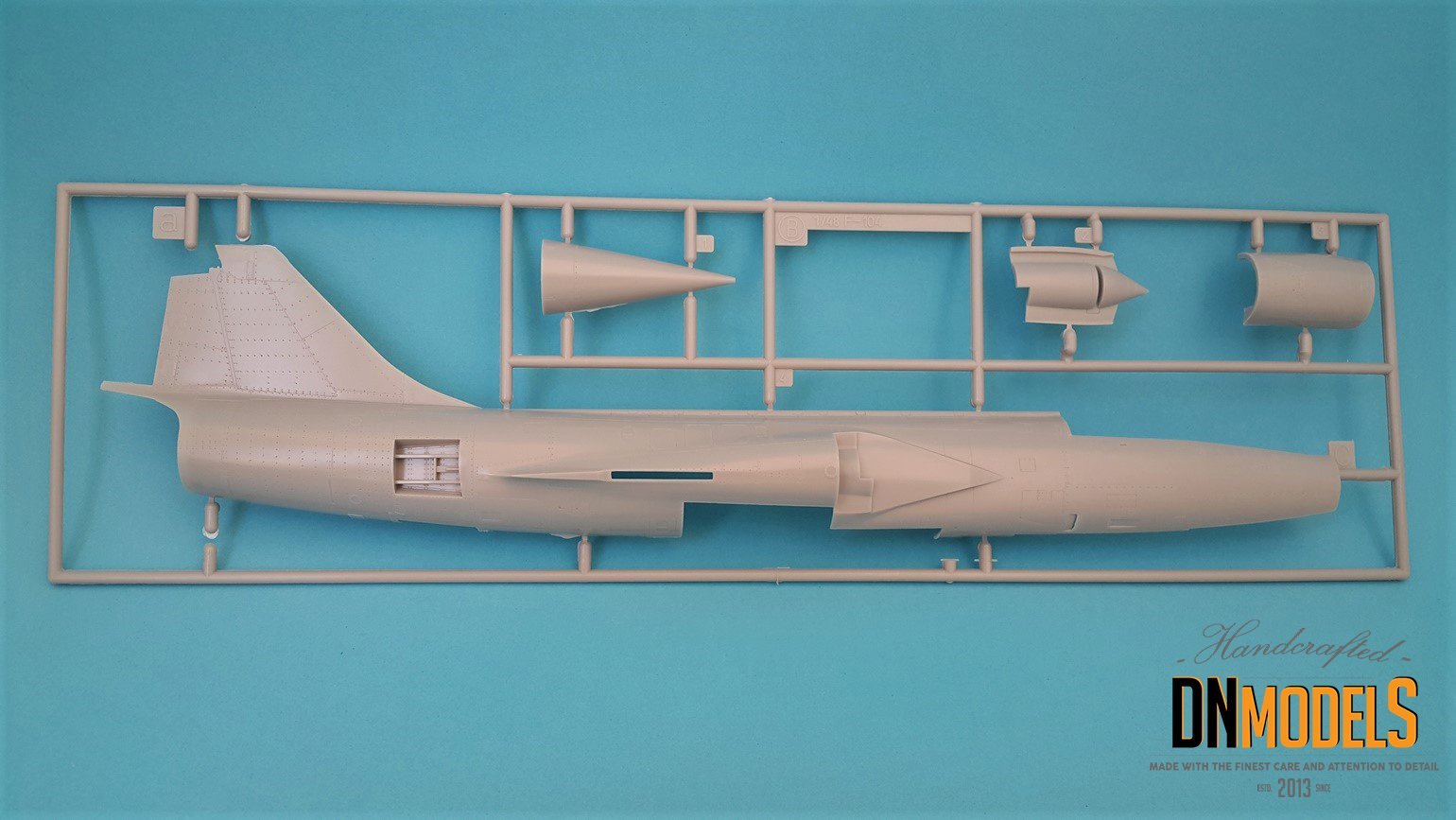 Very crisp, very nice and crystal clear. They come in a separate bag, to protect them from damaging, and are second to none. Too bad Italeri didn’t added masks to that set here, but again, to keep the price low that was necessary perhaps. 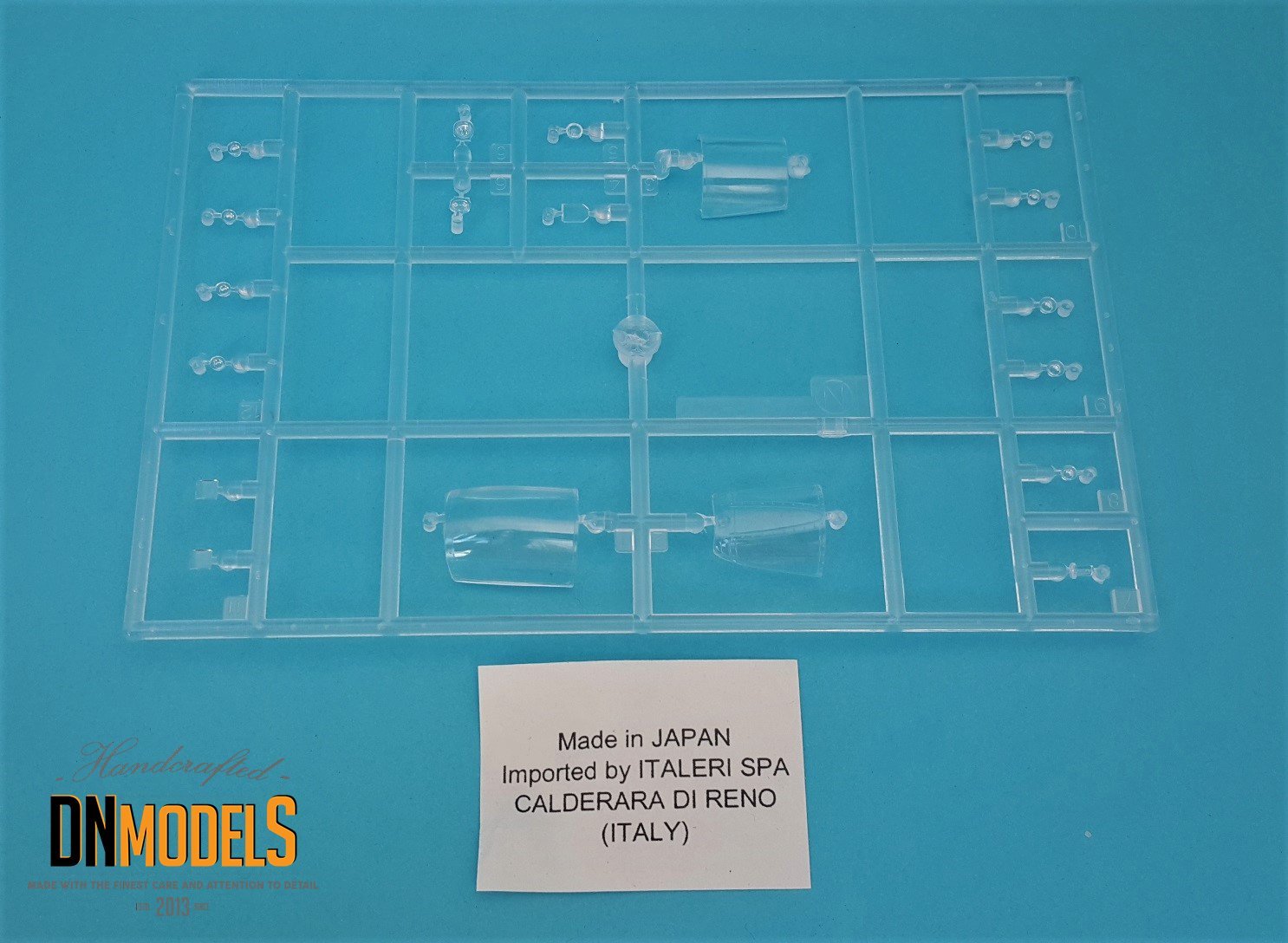 Otherwise clear parts show no defects, no unusual light or image distortion. They are thin and show detailing that is comparable with the newest toolings on the market today. The kit might’ve aged, but only as a good wine!

Decal sheet is Cartograf, as one might expect. The Italian maker repacked Japanese F-104 alongside with a company that does superb decals, also seen in Eduard repacks. They are there, simply because Cartograf makes their decals better than anyone else. 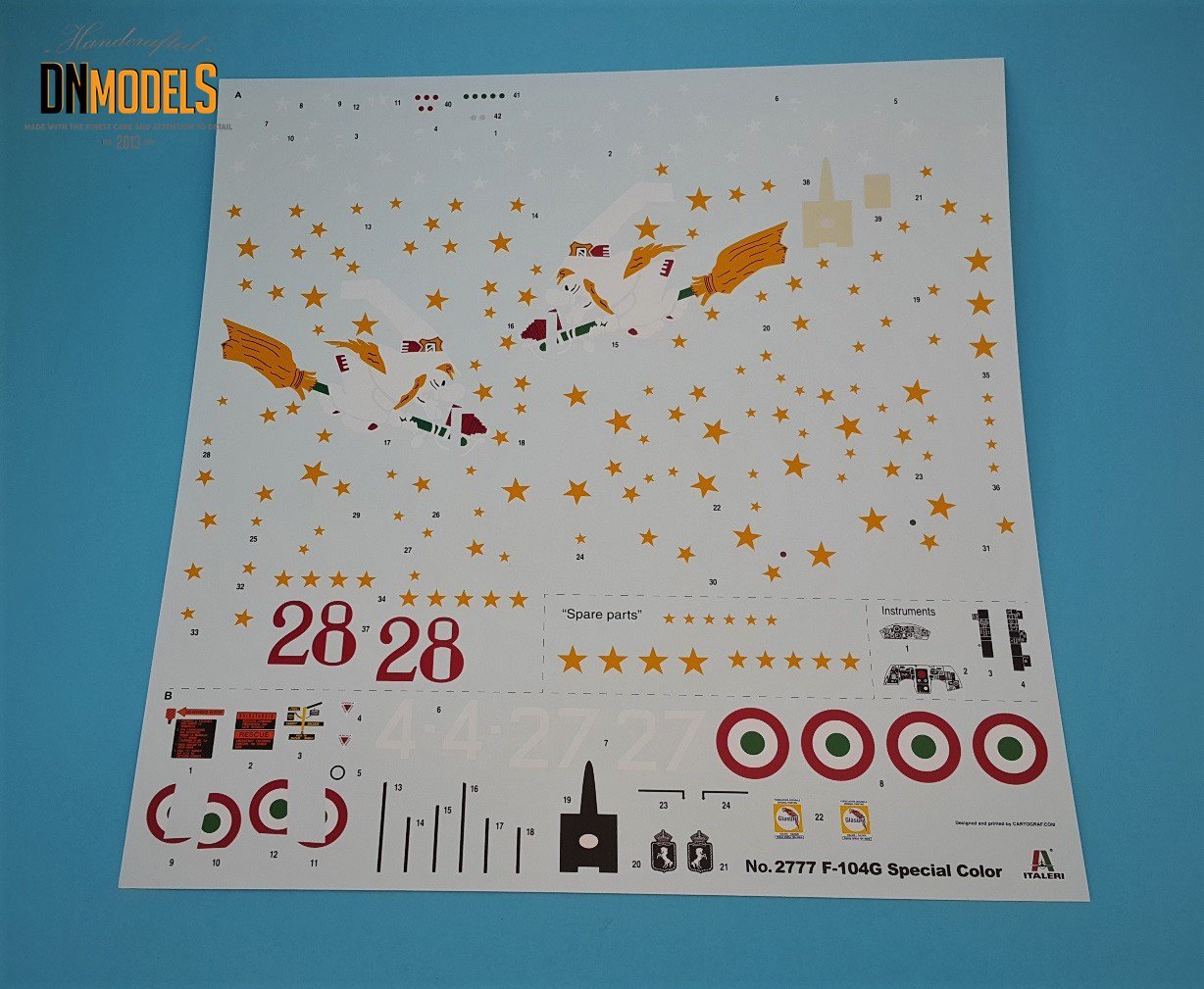 We have two quite distinctive birds here, and logos of Ferrrari and Glasurit featured on them are done with exceptional finesse and precision. That actually goes for the whole decal sheet, from the biggest parts of it, to the tiniest technical markings. 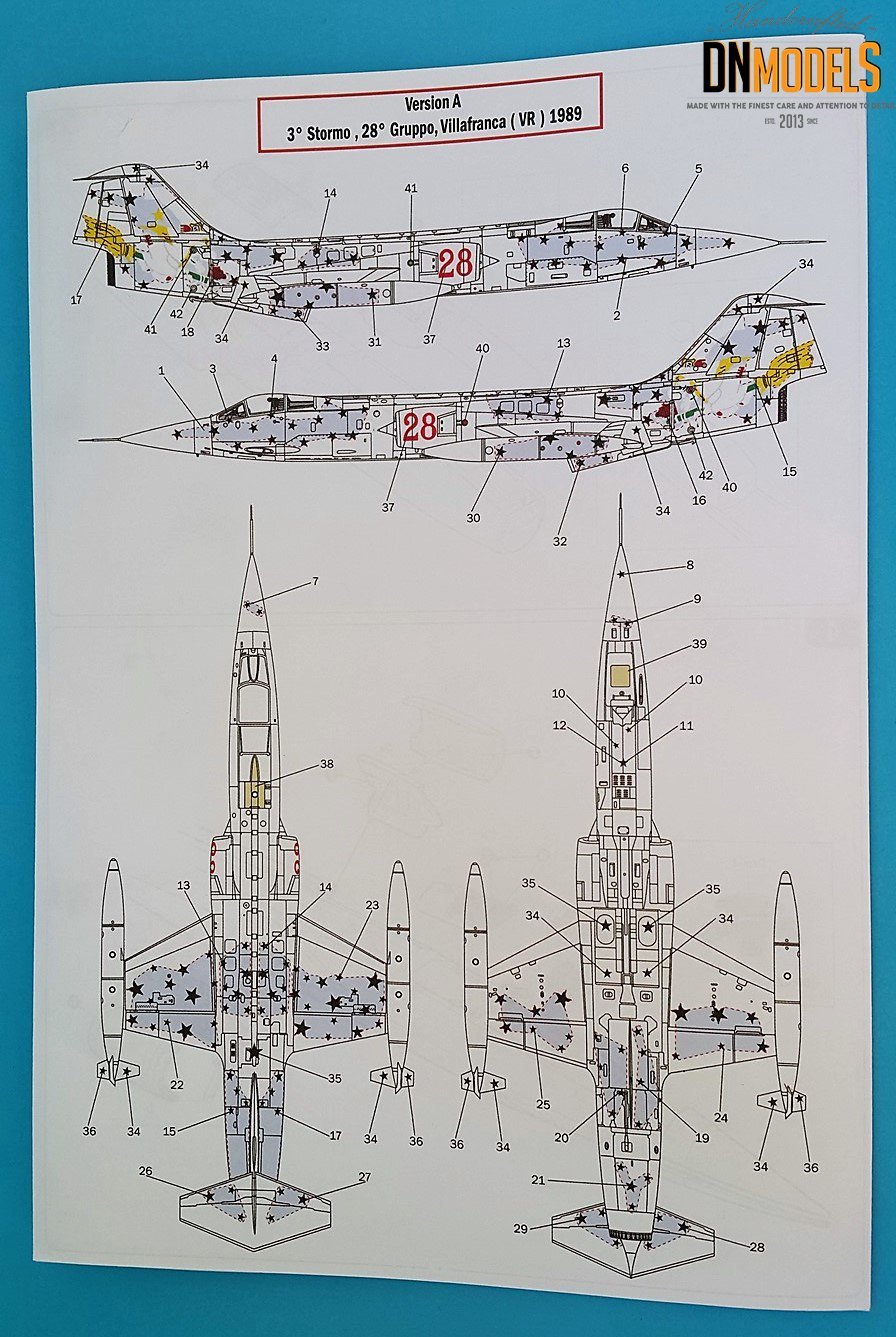 The mean looking flying witch on a broom is big piece of a decal, but looks precise and thin. Alongside with the stars featured all over the aircraft will be one lengthy application process, but very attractive nonetheless.

Since the Ferrari Starfighter shows different variations throughout the years, I believe that was the secondary option and that is why it is depicted on the background on the boxart. With that being said, the red F-104 is a legend when it comes down to Italy’s Starfighters and it will look absolutely gorgeous once built. 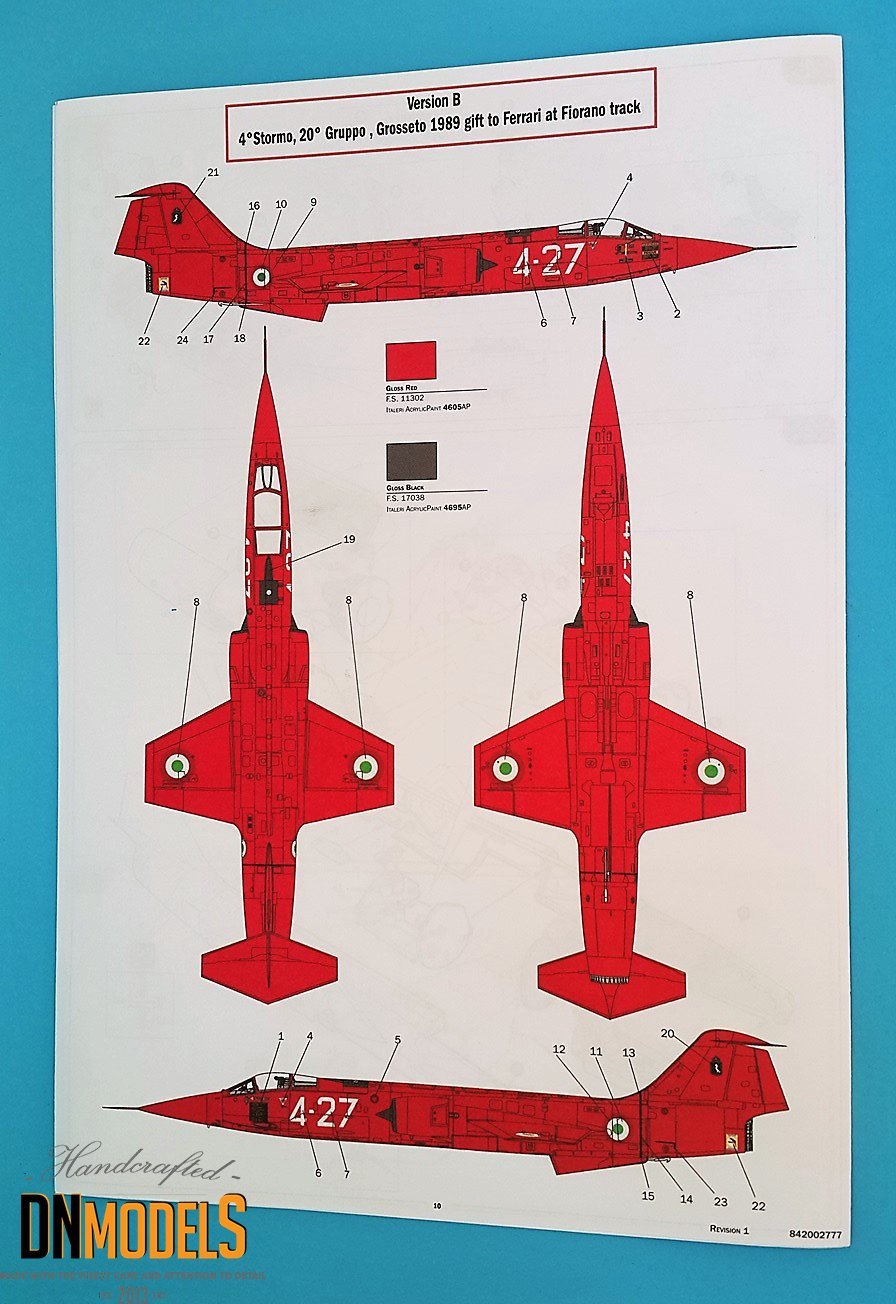 Only two decal options in this set, true that. But what an options! Italeri did a great job repacking Hasegawa into #2777. The combo with Cartograf is – as expected – very promising. The fact that the market is flooded with superdetailing sets from resin and photo-etch, gives one a tough job deciding how exactly this F-104 should be build.

Japanese tooling is still second to none and with those decals it promises a straight forward and easy build suitable for young modelers, as well as for the masters. For the latter ones, we have resin cockpits, nozzles, electronic bays and so on, aftermarket that can turn this Starfighter into a piece of art.

It is a fact, that the wings are very far from the reality, but to fix those we have DACO sets available. Or putty and fine sandpapers too.

The kit is not perfect, but it is still competitive and the price that Italeri gives makes it very tempting. Also, in case you own NATO-Bundesfighter set, you probably know, that Eduard packed one kit, with too many decal options and included aftermarket for at least two Starfighters. So if you want to build two, based on Eduard perspective of this kit, Italeri provides the same tooling for the half of the buck.

On the other hand, you can always load this Italeri F-104G with tons of resin and make it shine. It is very good out of the box, but it can be done astonishing with aftermarket add-ons.

One thing is certain: no matter what you will decide – build it as a demo F-104 or use it as a secondary kit to expand Eduard set, the result will be great! Hasegawa still stands proud!