These two awesome kits both feature amazing specs and each one of them has something superior. However, if we put them side by side for a comparison, we can come across a pretty interesting list with differences. Next is an extensive comparison of at least what I could find as the biggest PROS and CONS of each of these kits. For short, I will mention the HobbyBoss`s kit as the “D kit” and the Kinetic`s kit as the “A+B kit”.

First a quick overview of the Hobby Boss “D kit”: Hobbyboss presented a very nicely detailed kit with plentiful rivet and panel line details. The rivets are slightly too deep and noticeable, than they should be, but still they are there. The panel lines, on the other hand, are very fine and crisp. Except with the lack of pilot figures, the kit has everything that is needed to make a wonderful model OOB – plenty of optional parts, a lot of ordnance, 2 different sets of nozzle and decals for 3 different airframes. Of course, they all are D-versions of F-18, which is the modernized double-seater version.

A quick overview of the Kinetic “A+B kit”: Kinetic`s box has just about the same size as the other kit, but this one has more than twice the parts of the other kit. This is due to the amazing opt to choose between 2 completely different versions of F-18 directly OOB. You can build either the A version, which is the original one-seater plane, or the B version, which is the original two-seater plane. Each of them has numerous small and big differences, so there are parts for all of them included in this single box. In terms of details and quality of the plastic parts – we have almost the same parameters as the other kit. Yet this Kinetic kit offers a little bit more, such as finely engraved inner surfaces of the nozzles, dozens of key PE parts, decals for 9 different airframes, and more.

Now let`s get started by comparing side-by side the major components of the two kits.

Cockpits
The Hobby Boss “D kit” is for the D version of the plane, which is the double-seater version, so there is a front and rear cockpit. Usually, kits with such arrangement of the cockpits have the cockpit tub as one part, but this HobbyBoss kit has them as separate pieces. So you can choose either to paint and glue the tubs individually to the fuselage frame, or first to assemble the long cockpit tub, and then to glue it to the fuselage. No matter the choice – the two cockpit tubs have to be used and here is how they look:

The “Kinetic A+B kit” has the two cockpit tubs as one long piece – as it is usually found in most OOB kits. This is the cockpit tub only for the B version. There is one more optional cockpit for the A version of the plane. There are small differences in the IPs and it is definitely a good advantage to have them all. Here is only the 1-piece cockpit tub for the 2-seater version of the plane:

Regarding the details, the Kinetic`s kit cockpit tub is slightly better, because more knobs and buttons can be easily distinguished, as well as more detailing on the cockpit tub floors. Further, there are separate tiny decals for each of the instrument panels and even for the seat.

Both kits have similar leading edges for the intakes as separate pieces, which is a good thing, letting you avoid any seamlines along the outer curve of the intake lips. The “D kit” from Hobby Boss, though has slightly thicker edges and with some flat indentations, which are easier to remove while trying to thin a little bit the edges:

On the other hand, the “A+B kit” features slightly thinner edges and they are absolutely flawless without any scratches or indentations. You could leave them like that, but I recommend at least some subtle sanding to make them look thinner and finer:

The two kits offer slightly different bays of the airbrakes, which is normal because the D version is the modernized B version of the plane. This is very well presented in the two kits too. The HB80322 “D kit” has deeper and more pronounced rivets and panel lines,

while the “A+B kit” has barely visible rivets and panel lines. The tubing and wiring is quite sparse as well, which again, is due to the differences in the modernized versions of the plane.

The bays for the main landing gears of the “D kit” are molded together with the lower fuselage part, which is very convenient. The detailing in terms of rivet, panel lines, wiring and tubing is also overwhelming. At first glance, the bays look pretty detailed and interesting to watch:

The “A+B kit” has the MLG bays as separate pieces, which according to me, offers a wealth of greater advantages. First, this part with the bays can be easily adjusted regarding to the full size intake trunks. The “A kit” has only partial intakes, which end slightly offset and if you see through them – you can see the inner edges of the MLG bays blocking the sight. Yet in this Kinetic kit this issue is avoided by simply adjusting more precisely the part with the bays to the lower fuselage. Second, the detailing of the “A+B kit” is also slightly more superior, thanks to the greater amount of details and that they all are finer details with more crisp edges: 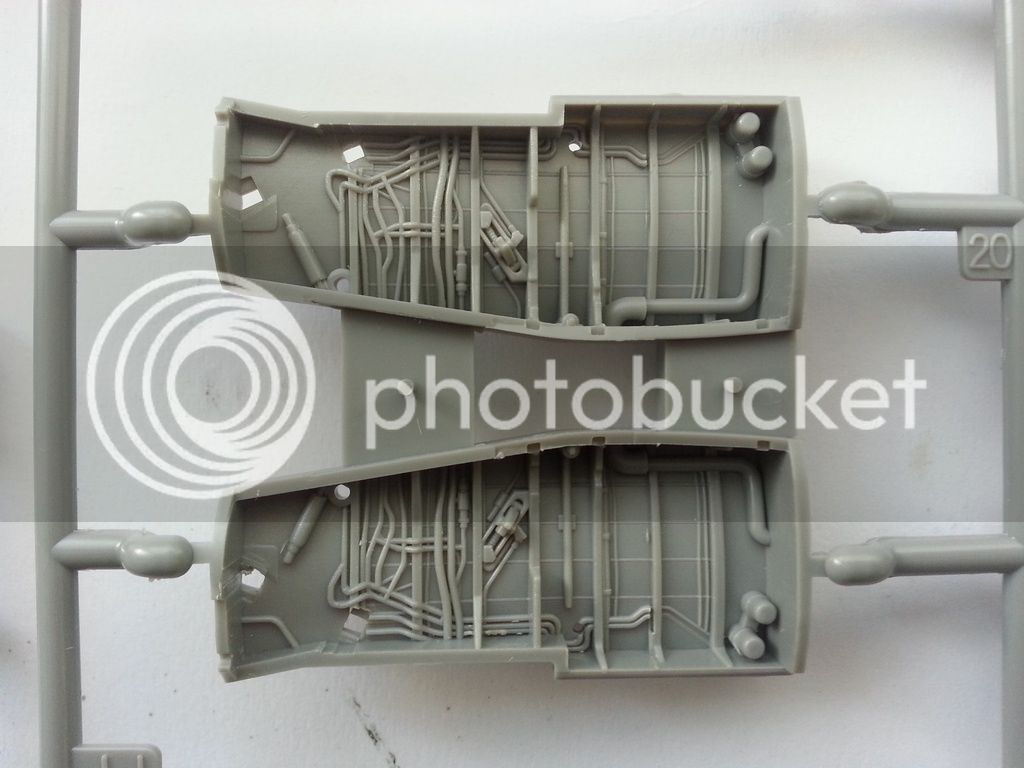 The Hobby Boss “D kit” has awesome rivets visible everywhere over the wings and fuselage parts. They are very simplified rivets, located within quite a larger space between them, and are also very deep – they look to me quite out of scale. Nevertheless, the surfaces look much more complete thanks to these rivets:

The “A+B kit” has also very nicely detailed surfaces with rivets and panel lines, but here the rivets are much much finer and smaller. Meanwhile, some surface areas look blank and they are completely lacking rivets. I found this as a more convenient option, as it is easier to simply add more rivets instead of filling the thick and deep rivets of the “D kit” and then making them again. Furthermore, the “A+B kit” has extensive surface detailing on areas, which are completely blank on the other kit, which is very advantageous:

Except for the typical differences between the versions, such as the arrangement of the pods, the two kits have very nice vertical stabilizers. The leading and trailing edges are sufficiently thin and delicate. The “D kit” has slightly less rivets and one little issue is the curved top edge of the vertical stabilizers, which should be almost flat: 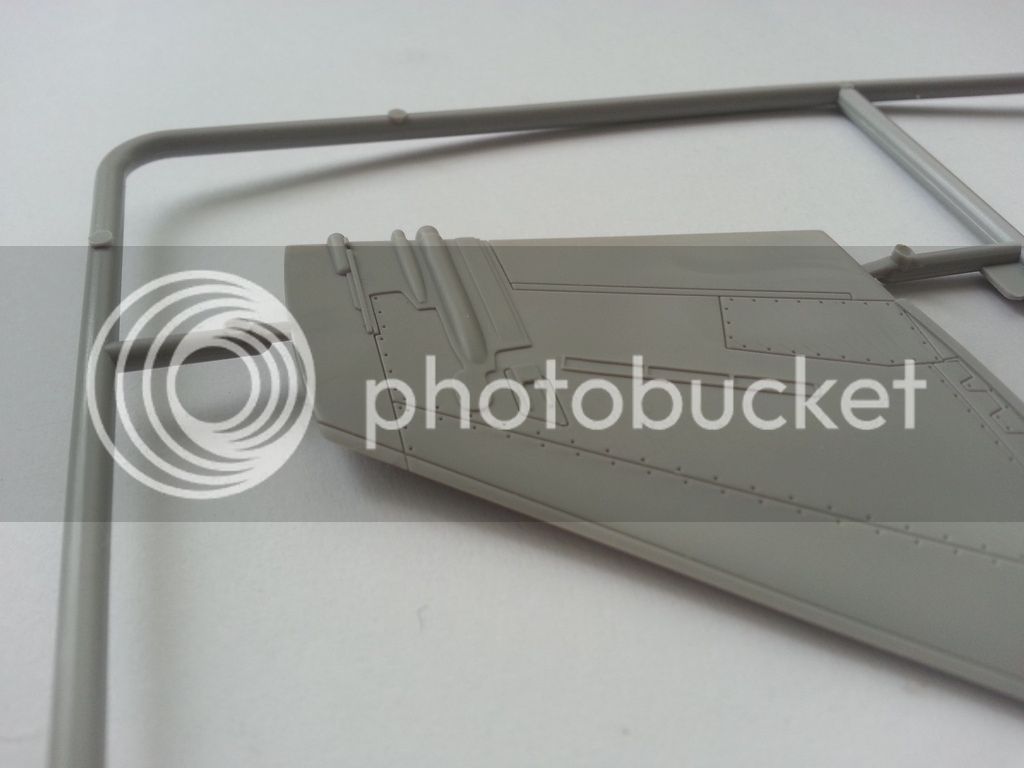 In the “A+B kit” this issue is solved – the top edges look just fine – still slightly curved, but barely visible. The rivet and panel lines are much finer and subtle. And the best thing is that there are two sets of vertical stabilizers – one set with the rudders molded as one piece, and another set with the rudders as separate pieces so you could glue them at a different angle:

In terms of trailing/leading edges of the control surfaces – both kits are almost the same. They have all the possible control surfaces as separate pieces and all their edges are sufficiently thin. Here is how the flaps/ailerons of the “D kit” look like, 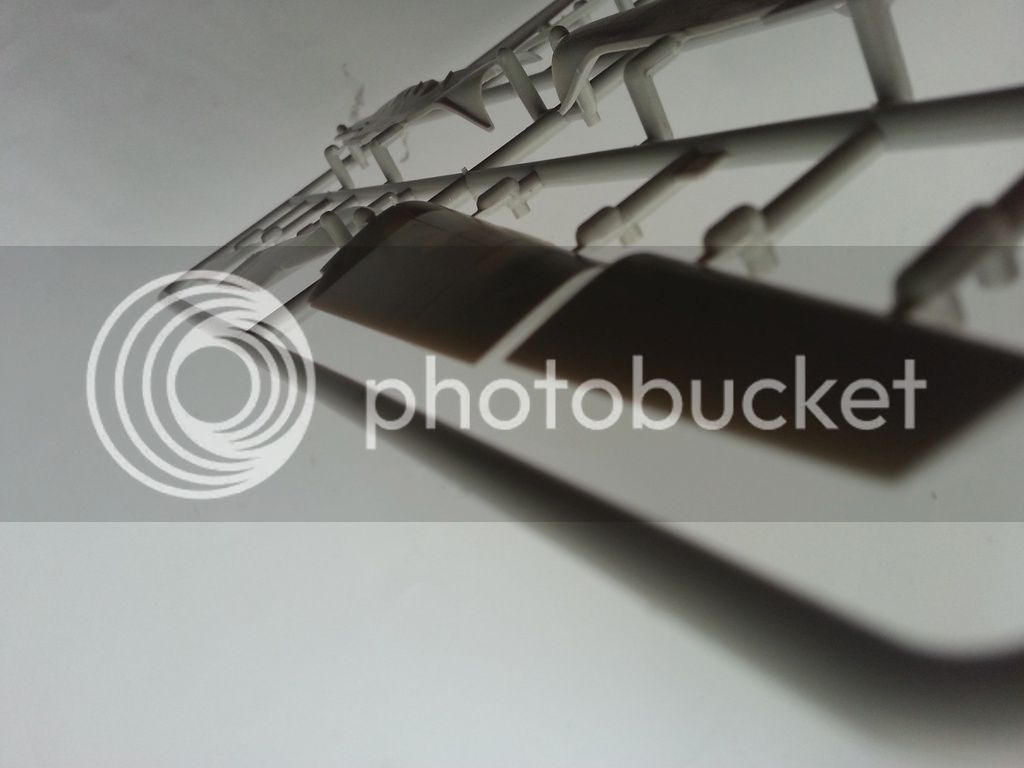 and some of the edges of the control surfaces in the “A+B kit” as well:

The HB80322 “D kit” has beautifully detailed pylons for the landing gears, which at first glance look absolutely satisfyingly good:

The vistas are almost identical with the MLGs of the “A+B kit”. The pylons are engraved and the hydraulics are easily distinguishable. The F-18 has a very complex MLGs and they are very well represented in this kit. Besides from that, the “A+B kit” features 2 sets of pylons for the MLGs, respectively with all the barely noticeable differences between the two versions of the plane. Furthermore, the tires are made out of separate pieces for the wheel hubs, which are to be sandwiched in the two halves of the tires themselves.

Both kits offer some type of advantage when it comes to the nozzles. The “D kit” has 2 pairs of nozzles as its main advantage. The major downside is that all the nozzles have absolutely blank inside surfaces of the cylinders:

The “A+B kit” contains only 1 set of nozzles, but they are much better detailed from inside, as well as from outside. The trailing edges of the nozzle flaps are slightly thinner too:

The two kits offer quite an extensive amount of loadout options, including fuel tanks, pods, missiles and guided bombs. This is a very nice feature, as the F-18 is famous for its numerous underwing pylons and numerous store points along the fuselage. Here is a small part of the chart with what is included in the “D kit”:

And this is the variety of loadouts in the “A+B kit”. A great touch is the presence of 2 laser guidance pods, and the unique ATARS pod that is stored in the place of the cannon under the nose section:

In summary, I could say that the Kinetic`s kit is far superior than the HobbyBoss`s kit – mostly in terms of variety of optional parts and also it is slightly better in terms of quality of the parts. Other than that, the ”A+B kit” features a vast array of advantages or PROS, which can`t be found in the other kit. They are so numerous, that it is almost impossible to mention all of them. So here is a short list of only the major advantages of the Kinetic`s kit:

The “A+B kit” from Kinetic is definitely a better choice when compared to the “D kit” from HobbyBoss. However, it is a more complex choice too, so it is recommended for modelers with pro skills and greater knowledge about the F-18 aircraft.