Grant Mk.I was a tank that was not very popular during the Second World War. Reasons for that are many, but from the Allied point of view probably the most significant one was the fact that Sherman appeared and send the Lee/Grant into obscurity. From general perspective, the tank was obsolete design from the get go and in addition to that there were plenty of German and Soviet tanks that gather a lot more interest, even to this very day.

Nevertheless, the Lee/Grant was used in more than one legendary battles and as a participant in those it deserves attention modeling-wise. MiniArt delivers a 35th scale kit line as of recently, which incorporates modern tooling, full interior and abundance of options, which are sub-divided into several packages. Here, we’re going to look at the Grant variant, which in my opinion is the most interesting one, especially due to its Africa campaign participation.

Grant Mk.I from MiniArt /#35217/ is an InteriorKit, which is both exciting and scary. For that a little bit later. The box is thick and colorful, with a nice boxart, depicting a camouflaged Grant Mk.1, with its hatches open. Stowage is visible and both those fact are hints of what one should expect to get with this release from the Ukrainian company.

On the side of the box there is a profile depiction of the painting options included in the box. They are plenty and since there weren’t enough space to show them all, they were scaled down significantly. There are few with single-tone camouflage schemes as well as few with interesting dual- and three-tone camo patterns. 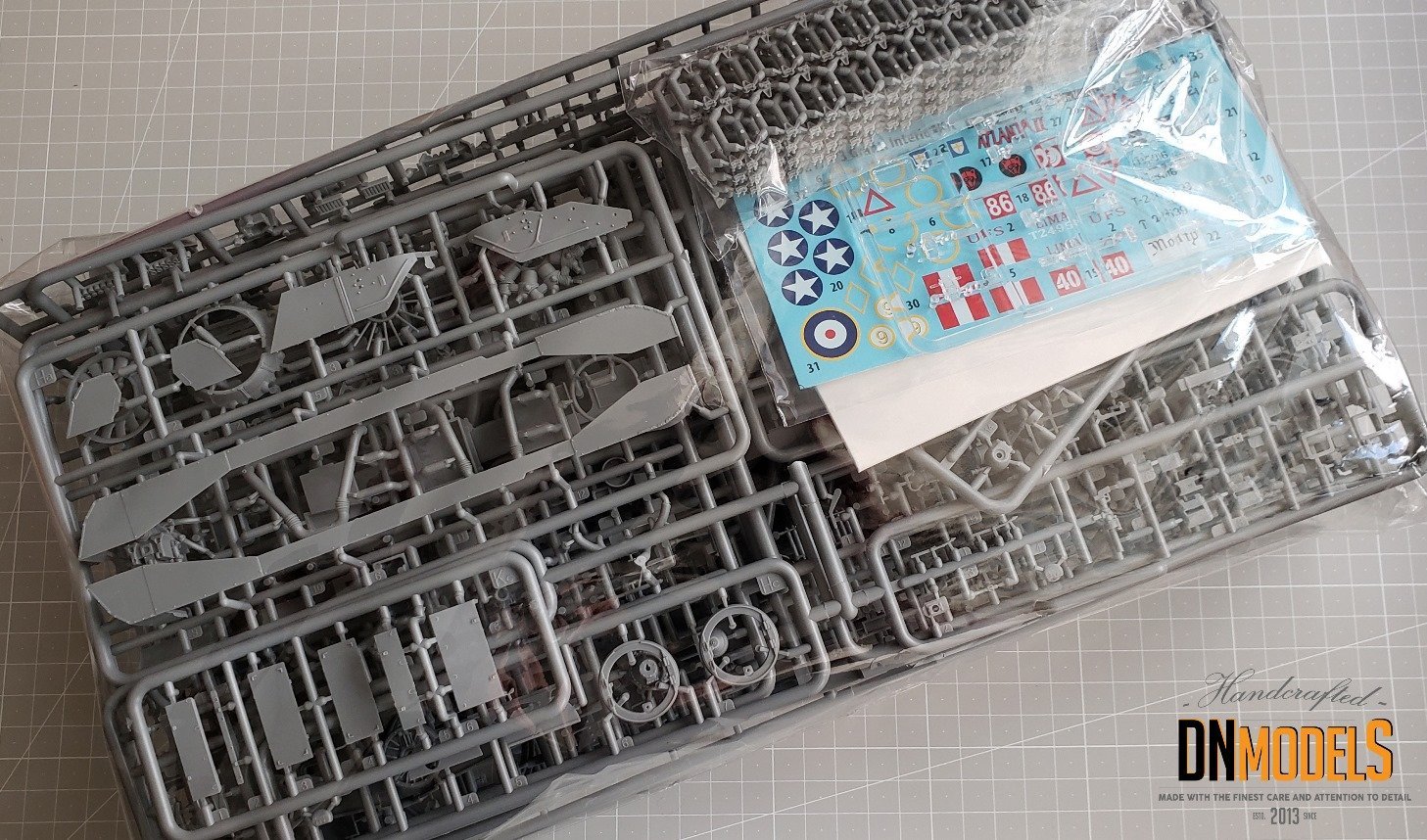 Grant Mk.I instruction sheet is the typical MiniArt booklet, with color depictions on the outside and black and white build-guide on the internal pages. The color part takes your attention to what is in the kit as features: positionable hatches, R975 engine, workable WE210 tracks, British stowage, etc. Alongside with those there are the sprue description and the color painting options for nothing less than eight different tanks. 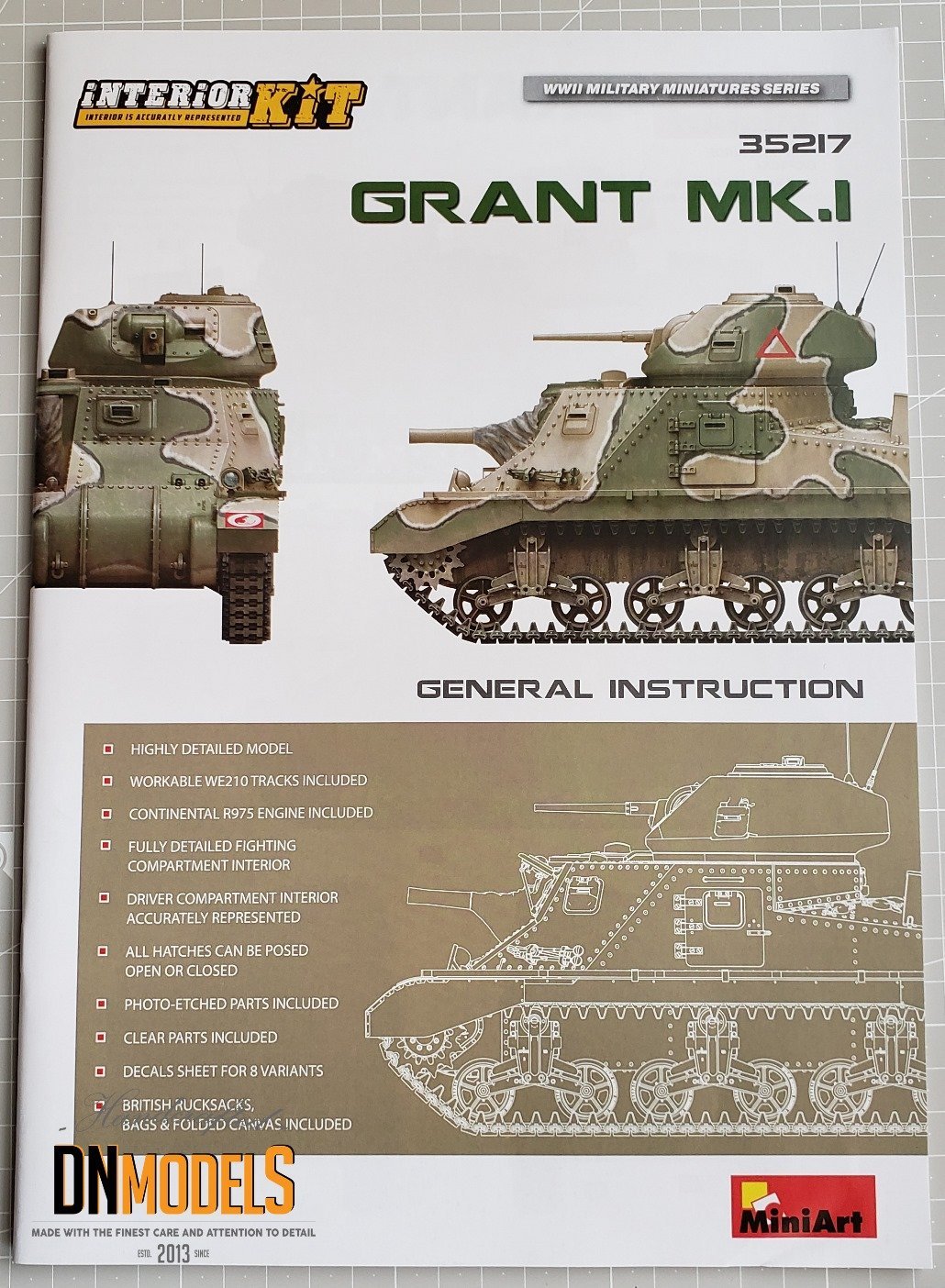 The instructions are clearly depicted and very easy to follow, but don’t let that fool you: this isn’t an easy kit to build and it is far from the capabilities of the regular novice modeler. Even though it looks pretty simple, there are myriad of parts to be installed inside and out and many of them are intricate and very delicate.

Each step features few, but clearly marked pieces to be assembled and when it comes down to larger and already built sub-assemblies, they are in shaded black and white depiction. That spares the confusion and eases up the process. However, don’t forget that there are a lot of interior painting to be done and some weathering too, which is the tricky part here. Again – not an easy build, despite the friendly instruction sheet. 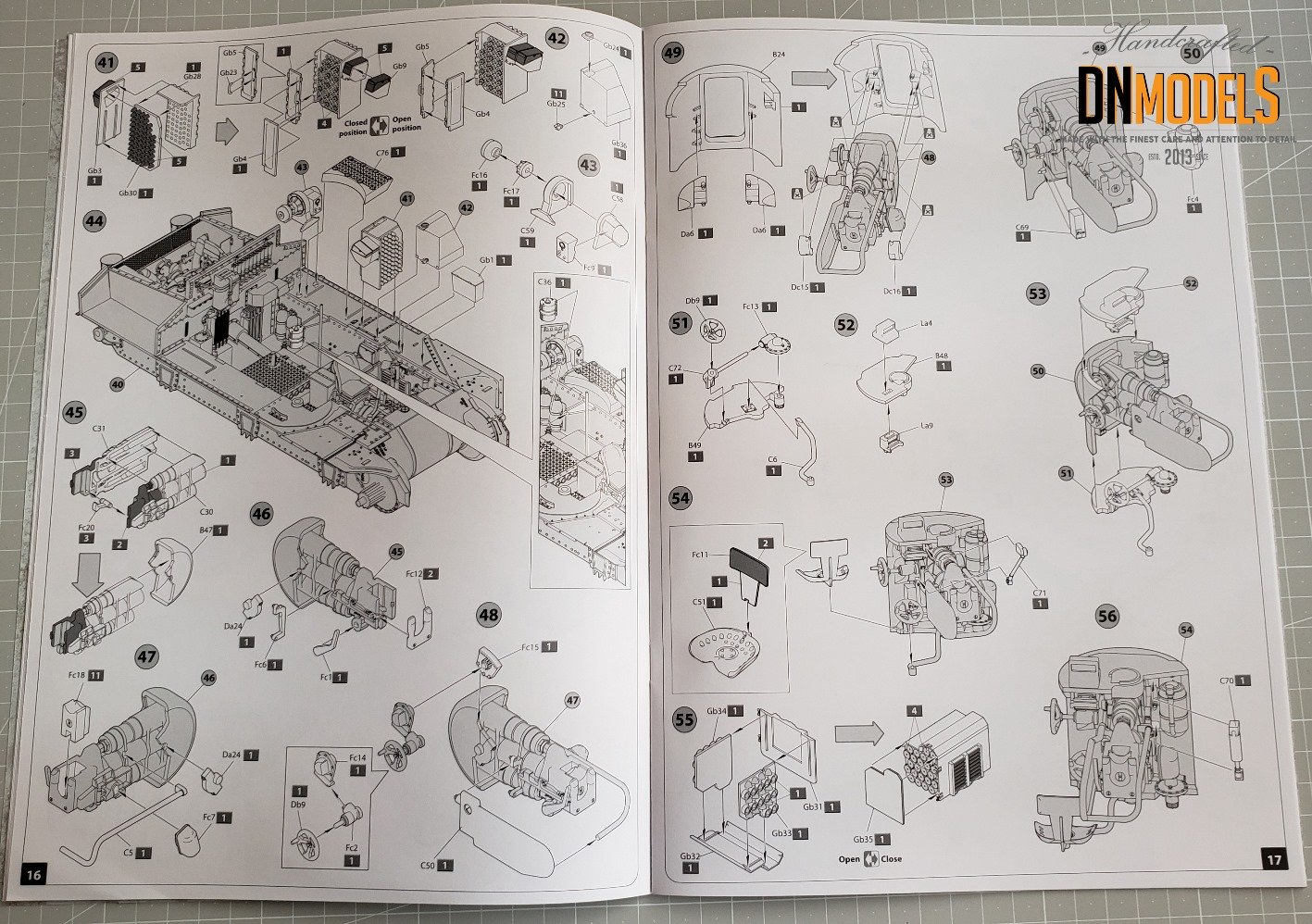 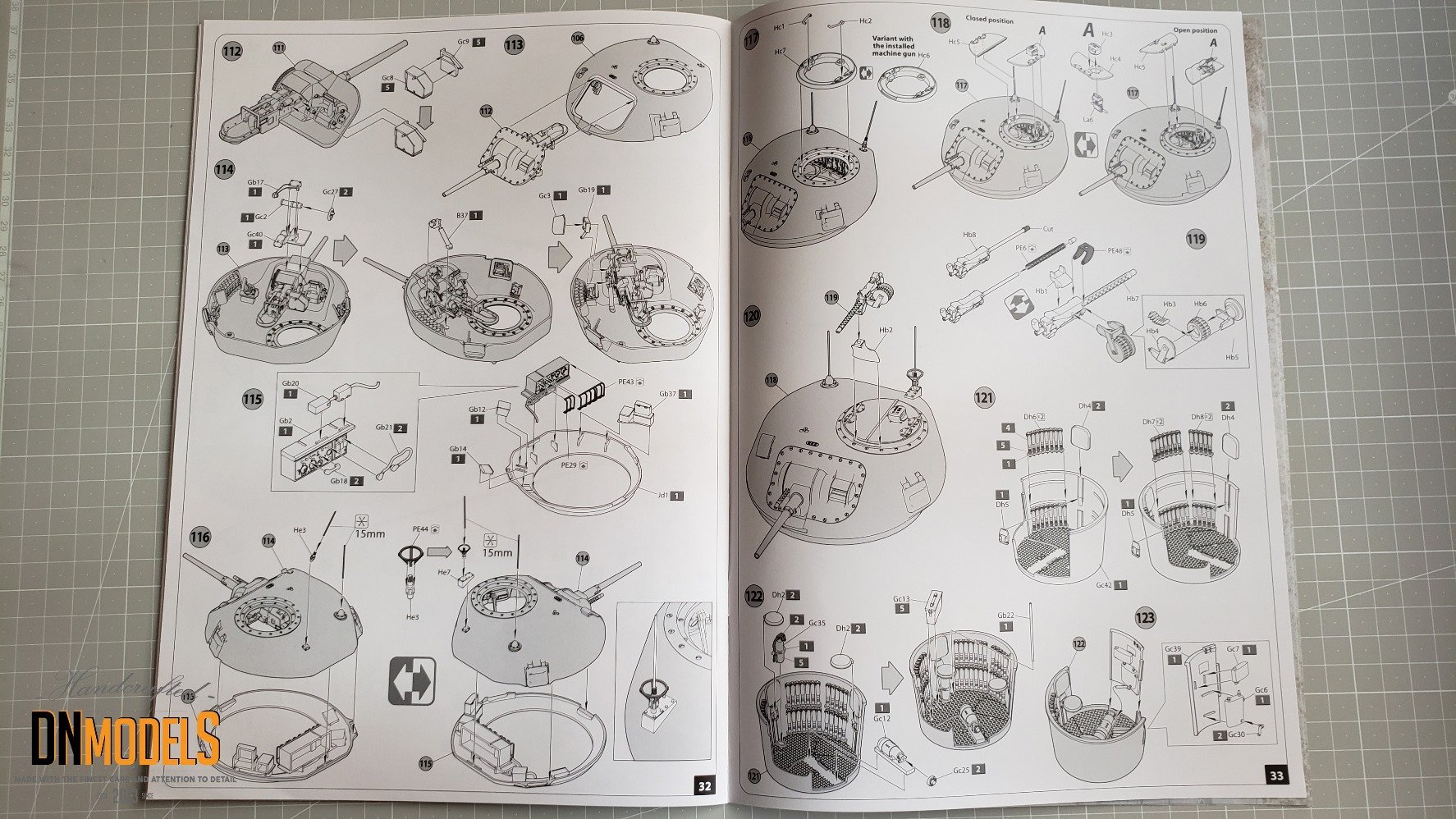 The plastic material of this Grant Mk.I is beautiful in general. MiniArt are from Ukraine, but they get their plastic from Western Europe and that is only because they are striving for quality above all. The engineering of the kit itself begs for that.

It is clearly visible, that with so many sub-assemblies, small parts and many molded details, there is no way around that. Being a producer of contemporary kits nowadays is very demanding both the on the production quality and the materials used. With that said, I must add that it is like that on the modeler’s abilities as well. 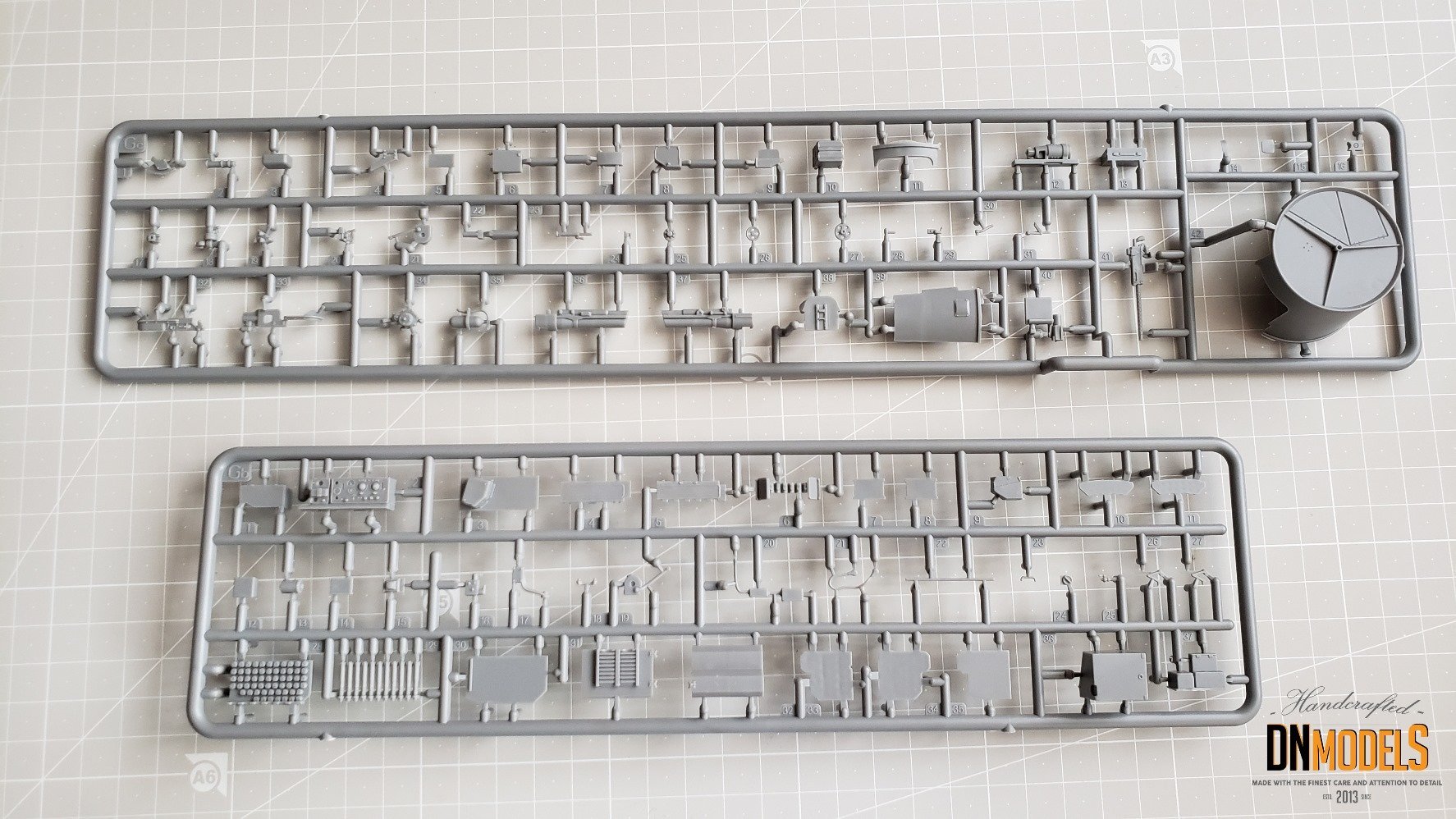 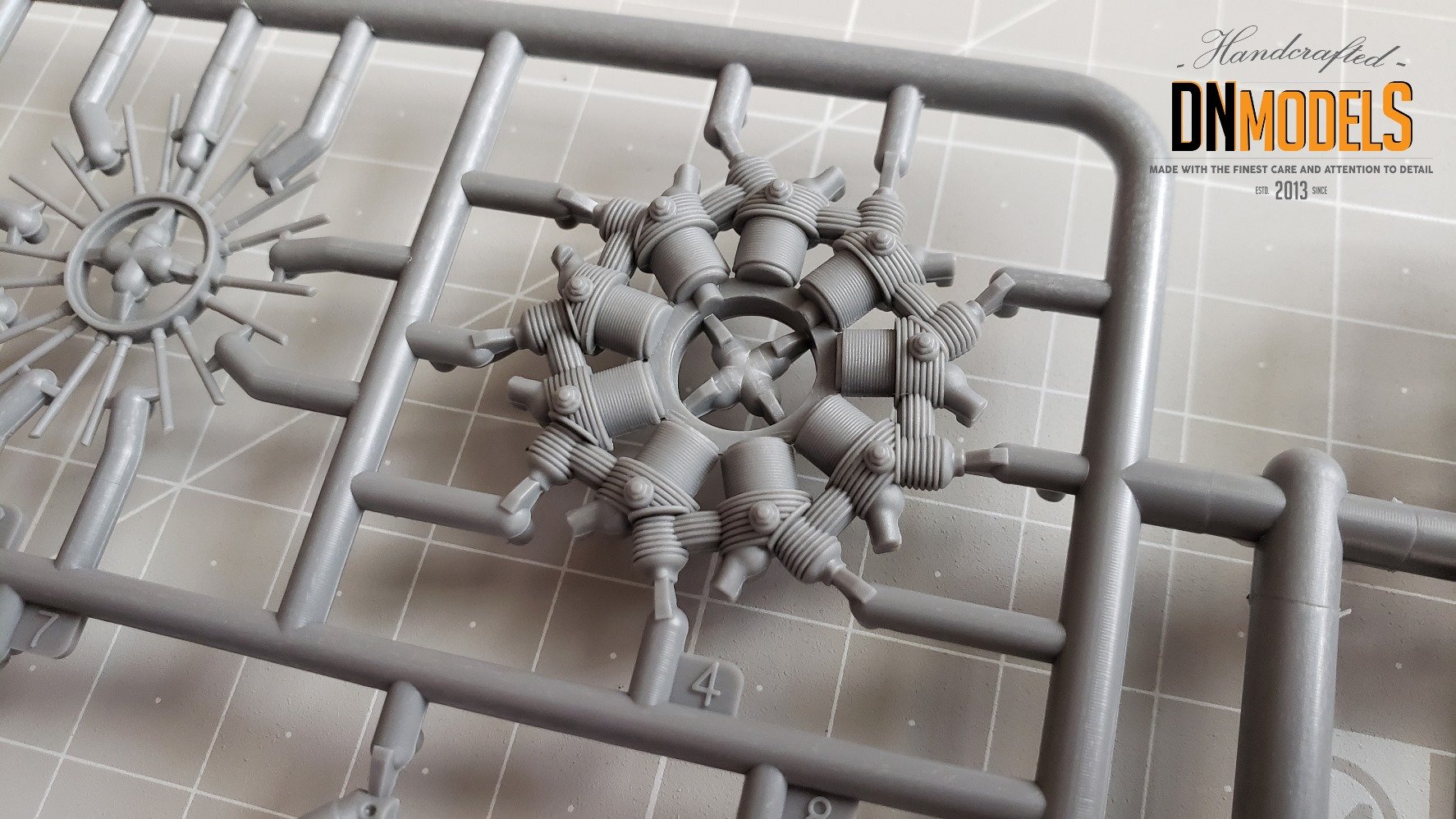 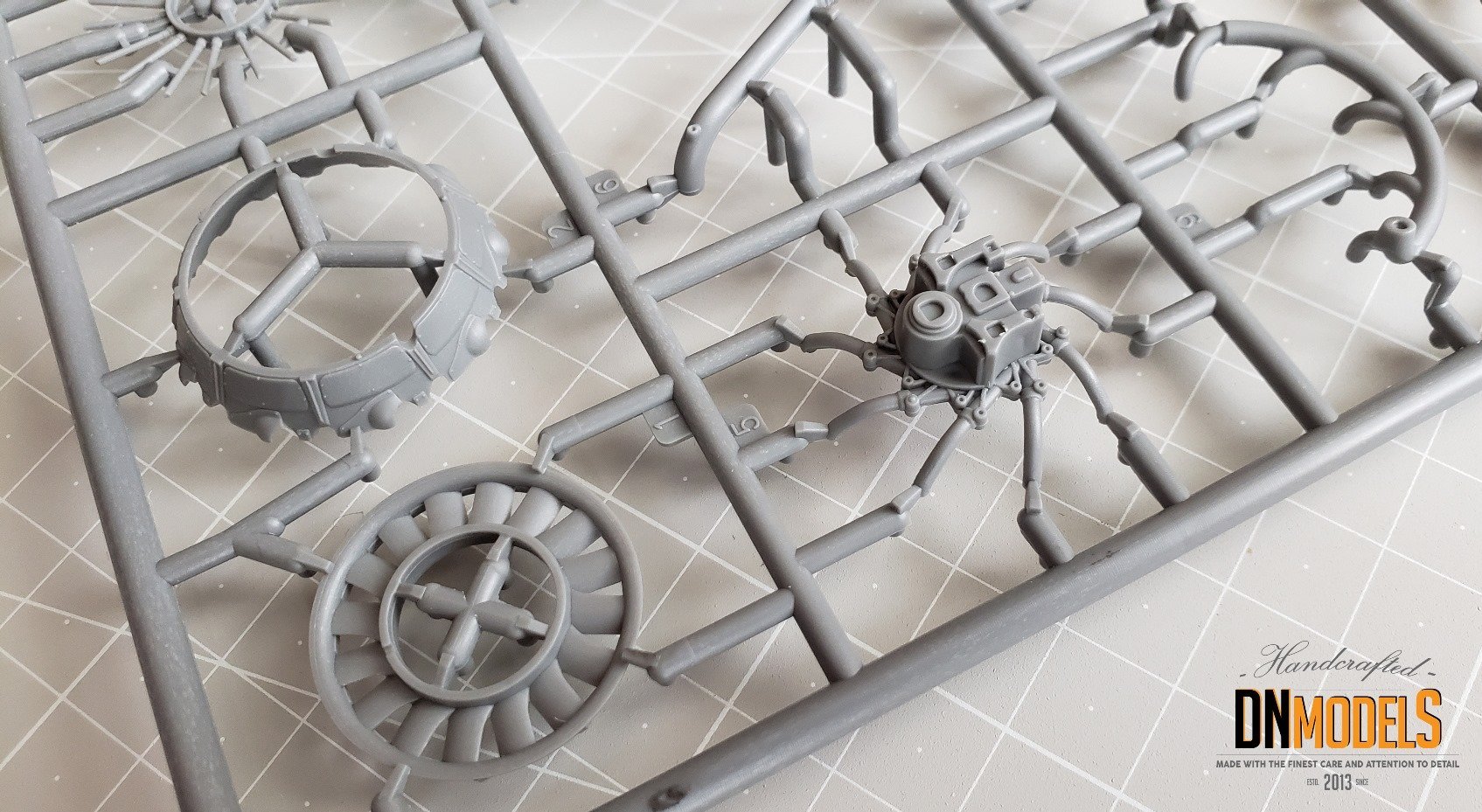 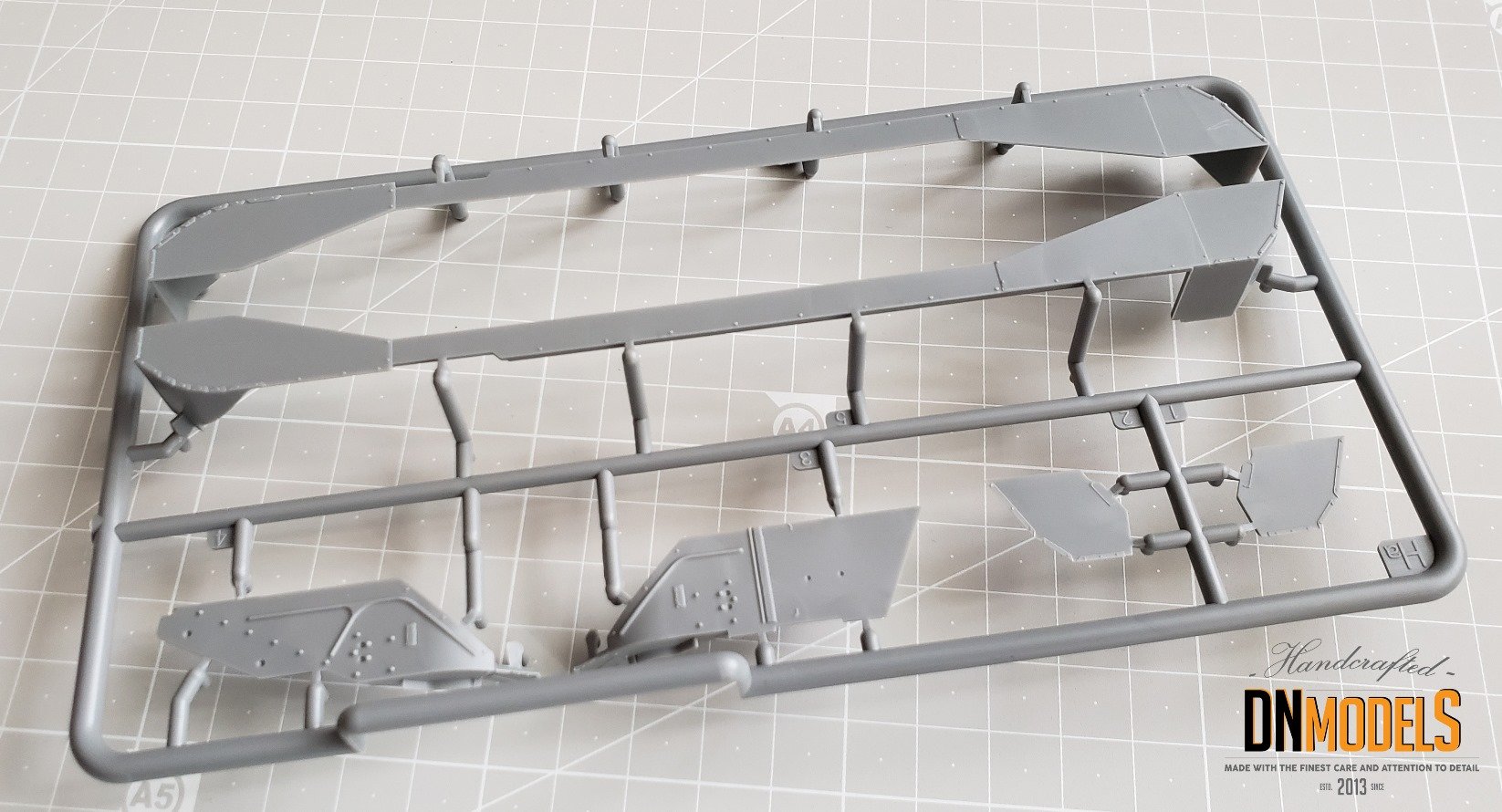 Grant Mk.I tank featured a radial engine, which is wonderful in my opinion. It is something different and on top of that radial engines always gives some additional room for super-detailing and interesting weathering. The elements of the engine are very nicely molded and with crisp detail all over. That of course goes for the whole model, but engine is the clearest example of the overall quality.

There are nice rivets, lines and texture all over selected elements, done with superb execution. Especially the texture, it has no competition what so ever in any other model maker. It is true that many companies provides similar features, but here it is spot on. The turret is a great example and it is clearly visible on the pictures. 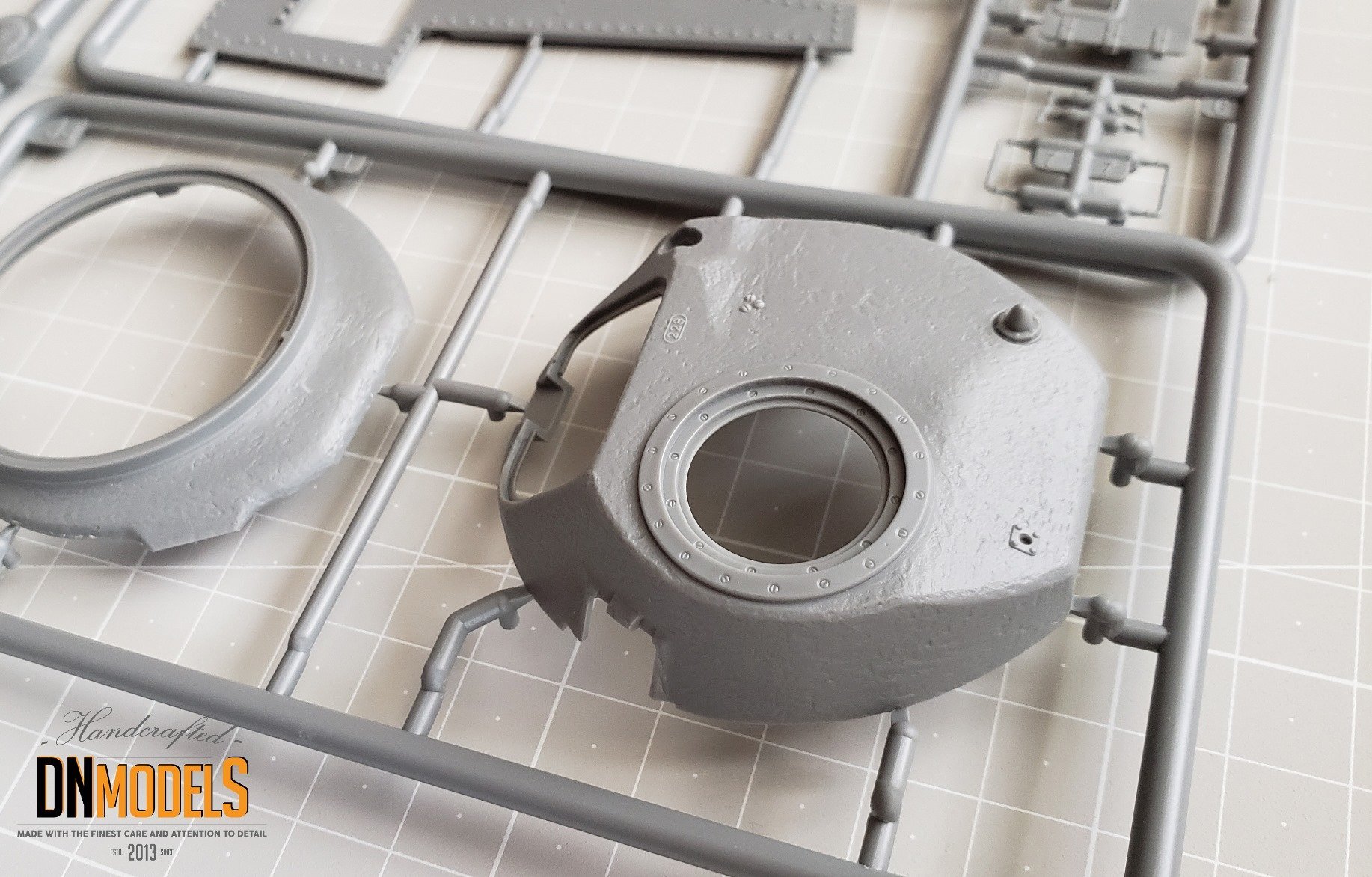 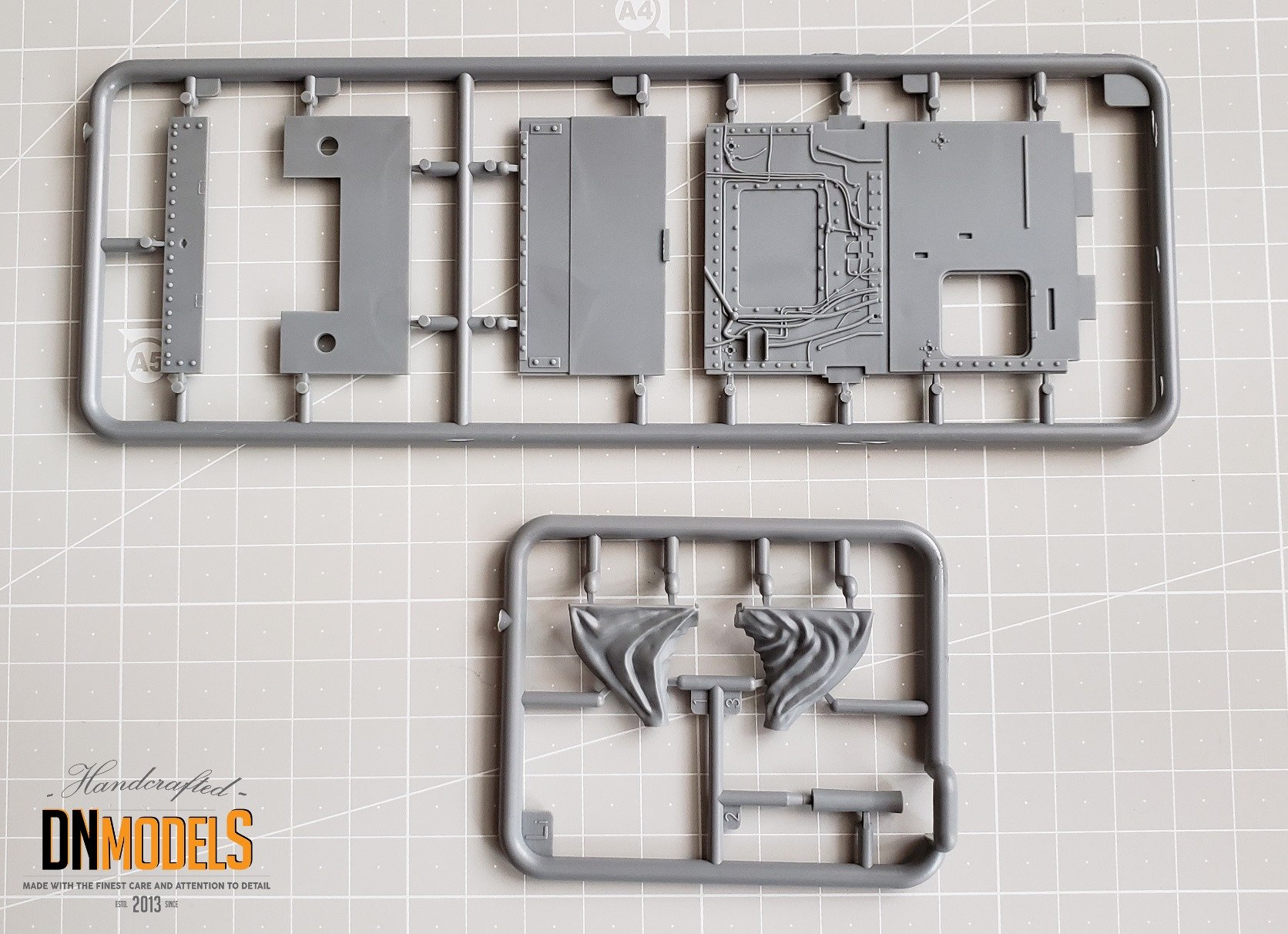 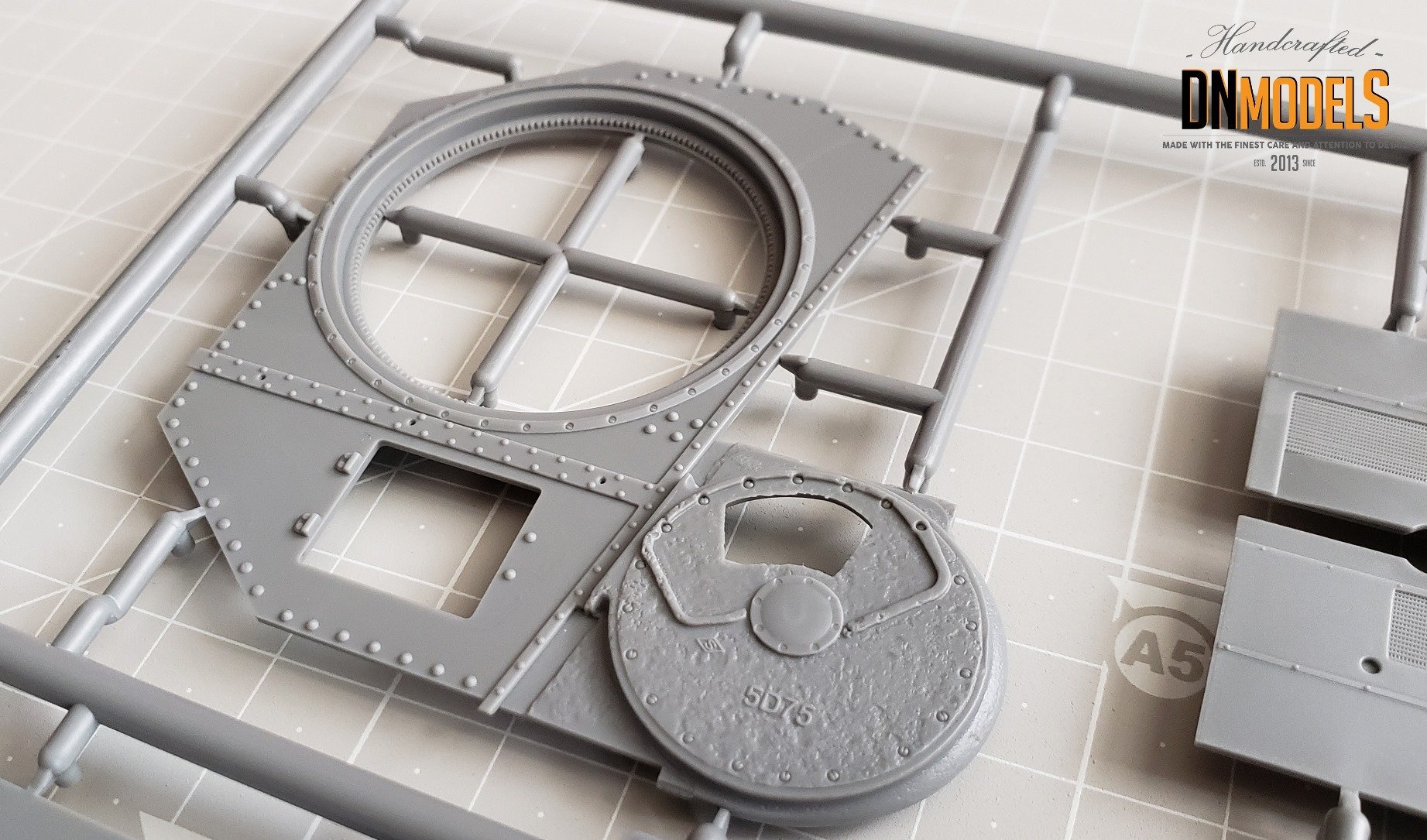 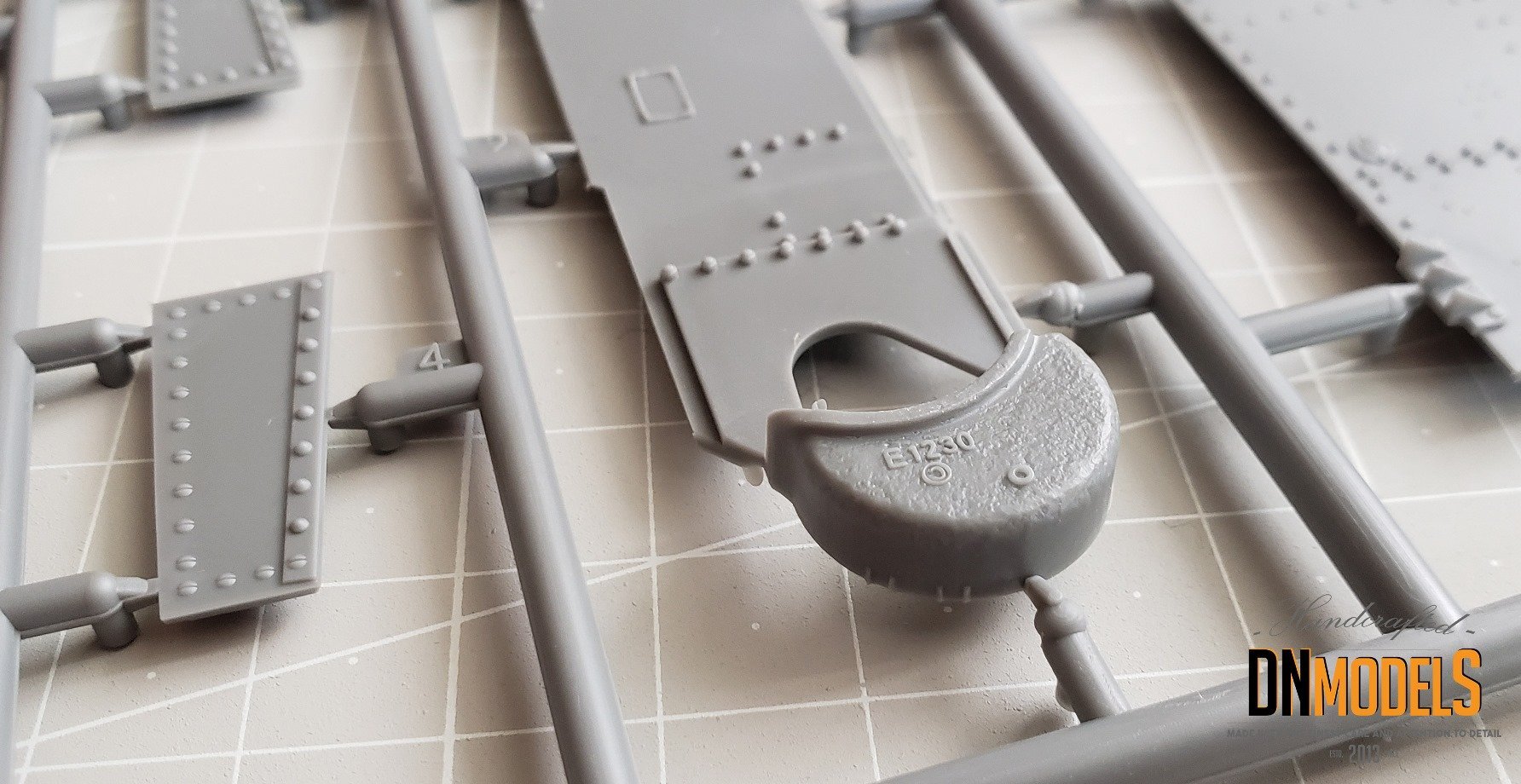 The stowage is another highlight of the kit. It is very close to resin material, although not that good. However, it comes with the kit OOTB, which saves money and is always warmly welcomed by modelers. In this particular kit, this is one of the greatest additions and shows how good and intuitive MiniArt are when it comes down to please their customers. 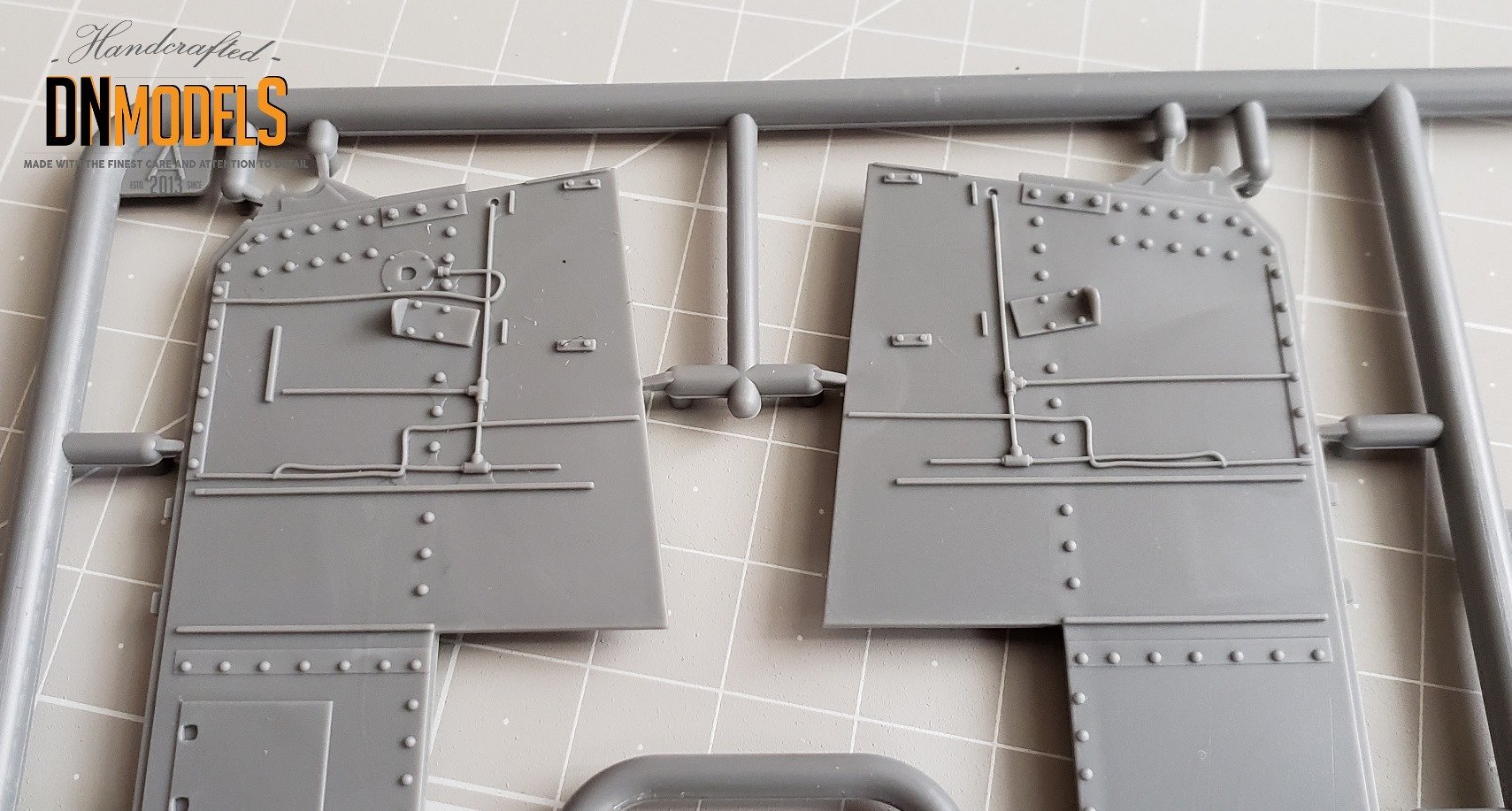 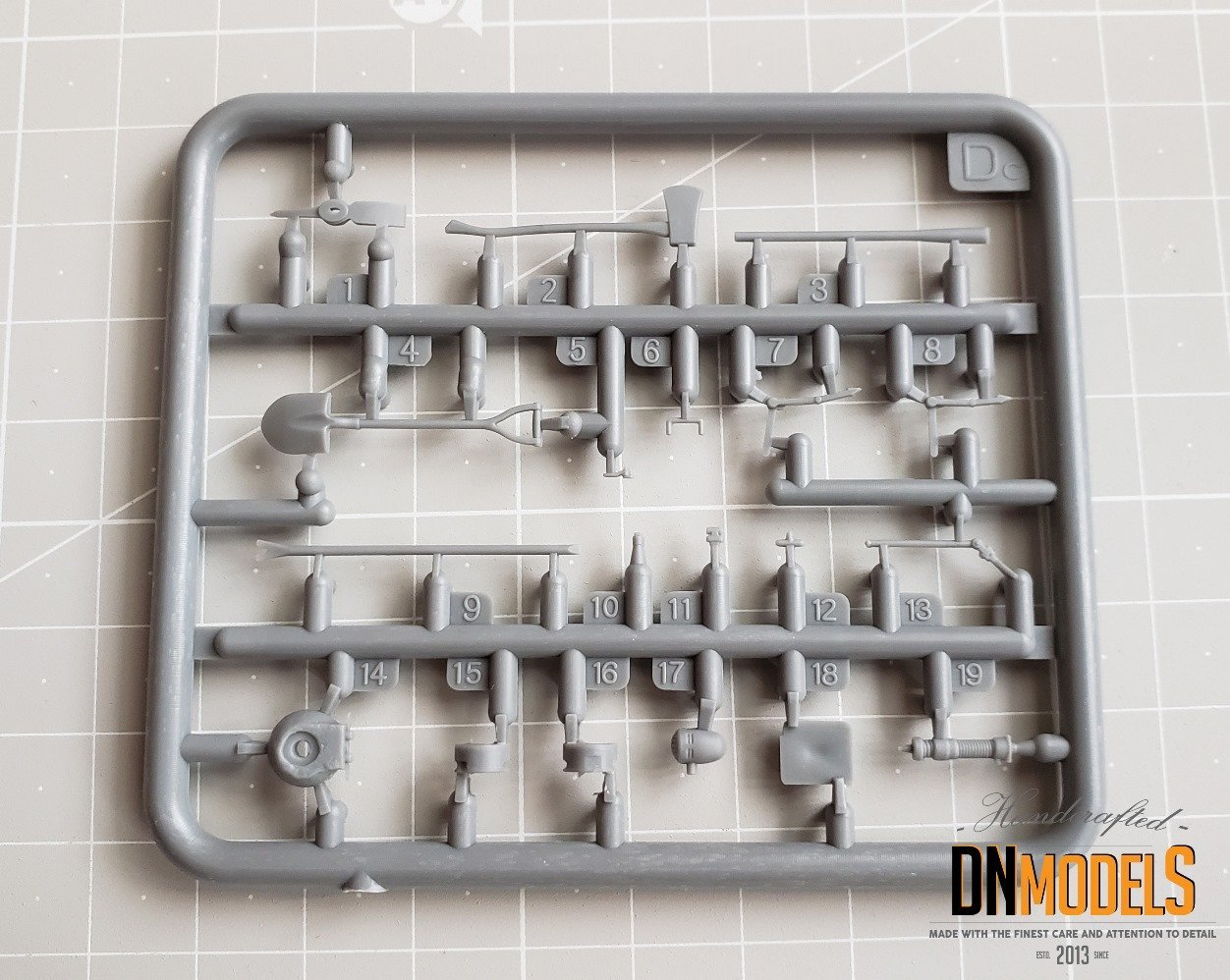 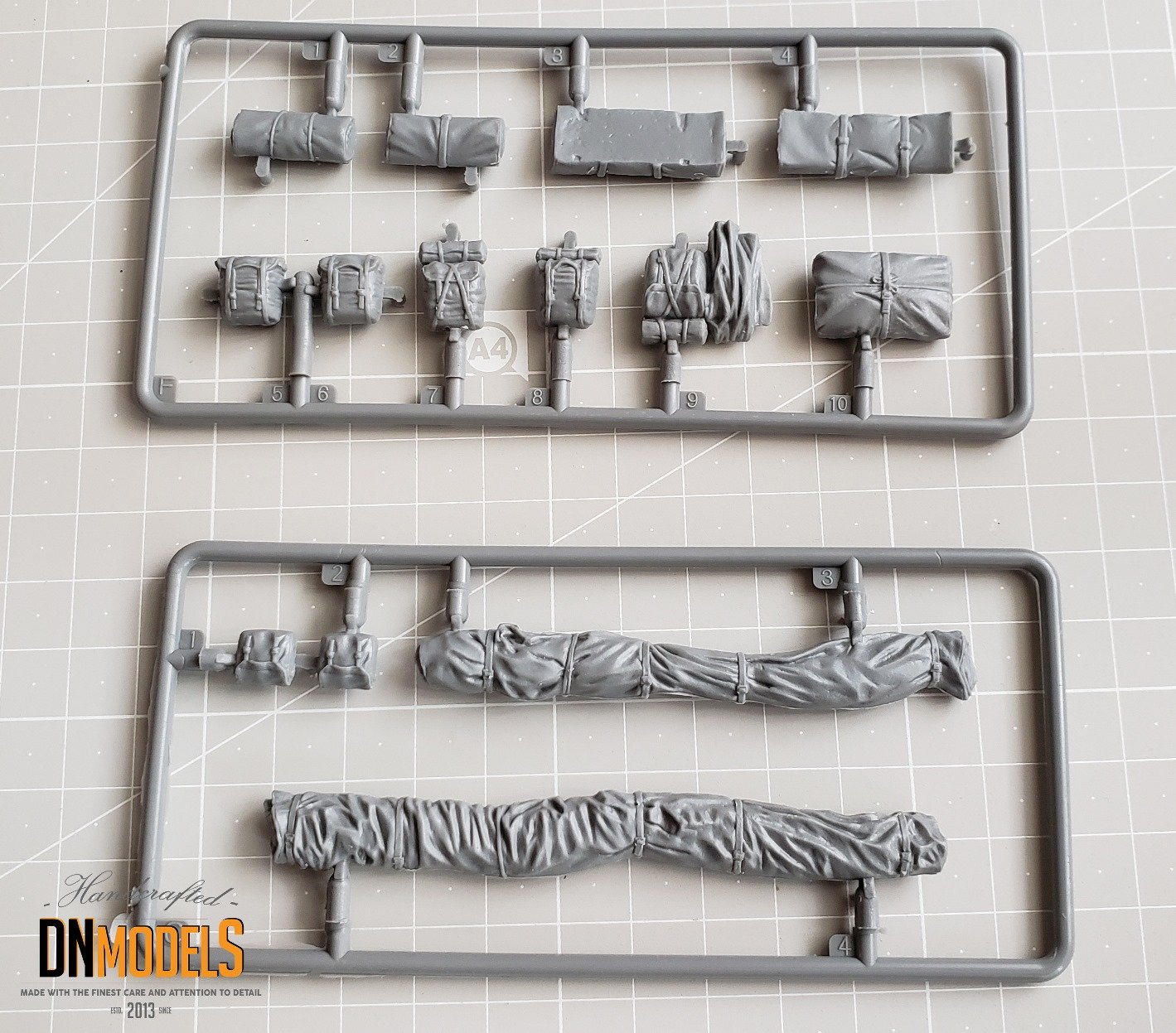 Are the other thing right next to the stowage that can be praised highly. The lack of decent tracks for Lee/Grant as well as Sherman tanks was and is an issue for many and for quite some time. This kit comes with plastic tracks which are workable and even though tedious to assemble – should be appreciated.

Grant Mk.I tracks are simple, yet they need some assembly and are engineered with sub-parts, which will both prolong the building process and the weathering options. For some, long building process is not enjoying, but in general, armor modelers are fans of such experience. Maybe that comes from the fact that many repetitive parts comes with tanks that usually does not when it comes down to airplane modeling for example. Or maybe weathering similar parts differently is the key. Whatever the case, the builders will be very pleased here. 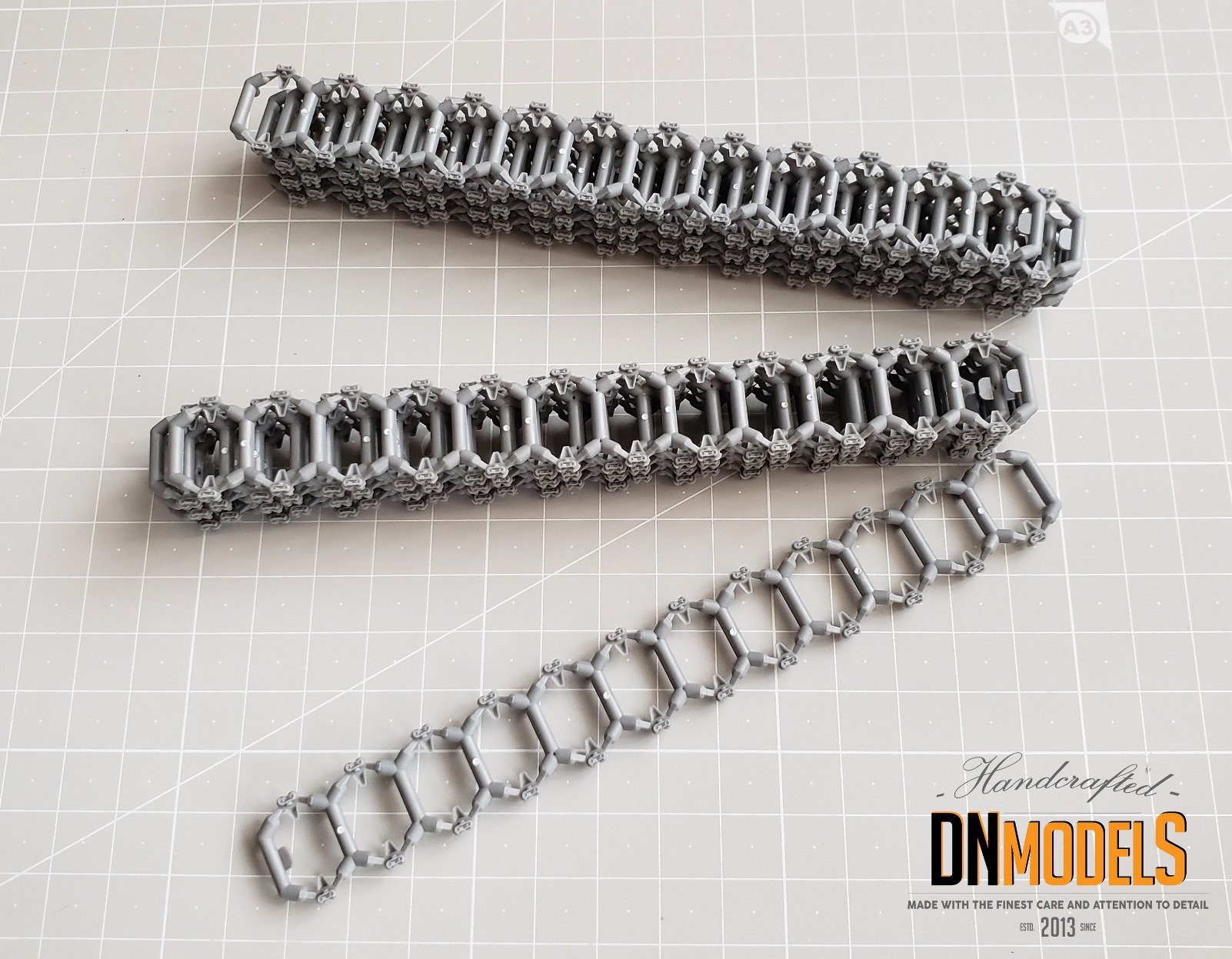 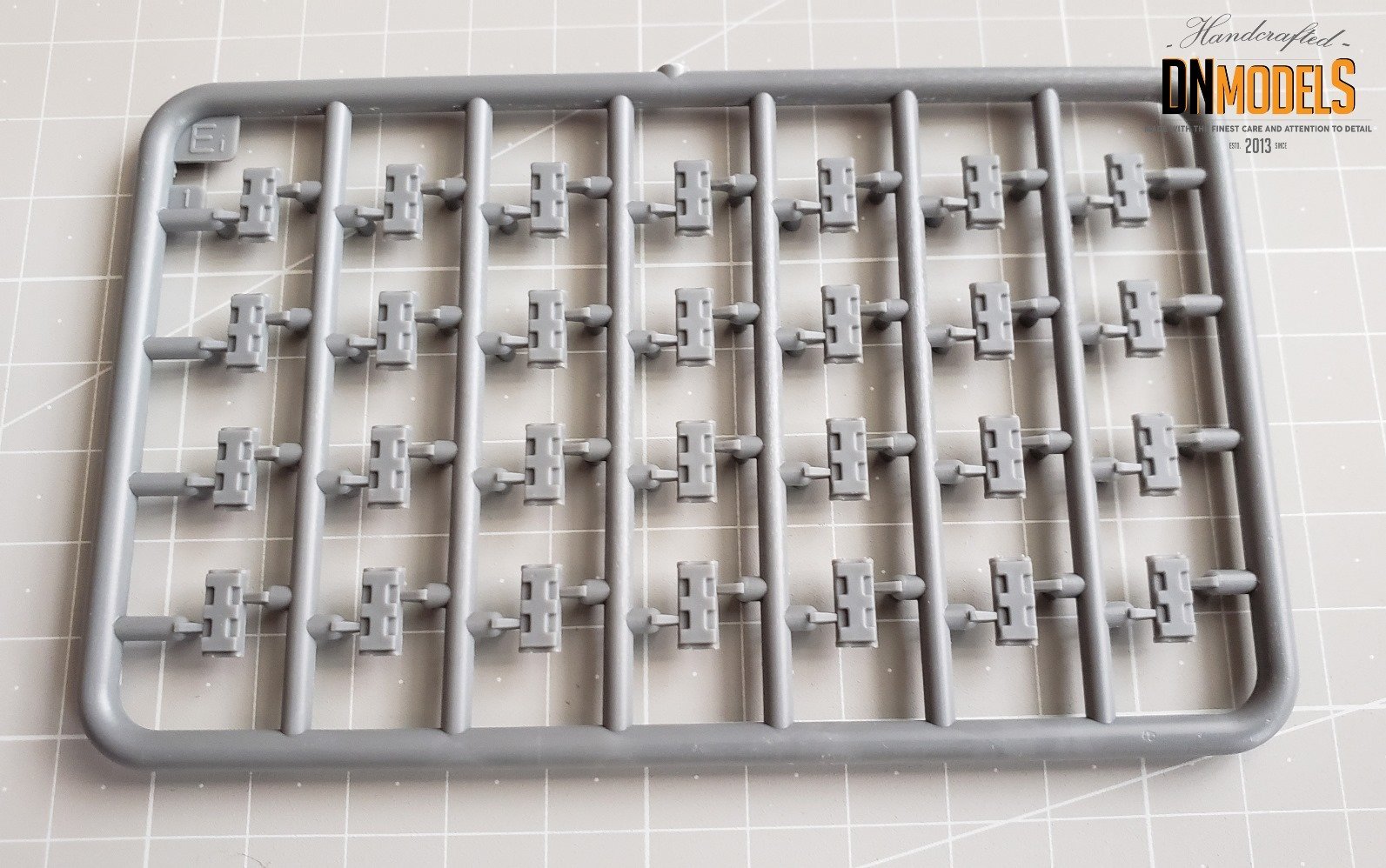 Photo-etch sheet is packed in MiniArt branded hard-paper envelope, which is both for protection and marketing. It looks great and with works perfectly. The PE sheet is long and very thin. In general, MiniArt’s PE parts are very delicate and you should be careful if you like to sand those pre-glueing.

The decal sheet is almost twice the size of the photo-etch sheet, which is not typical when it comes down to armor modeling. However, it is self-explanatory here, having eight different variants included. The producers is not MiniArt, but a sub-company which is again from Ukraine. And as we all know, some of the best decals come from Italy and Ukraine usually. 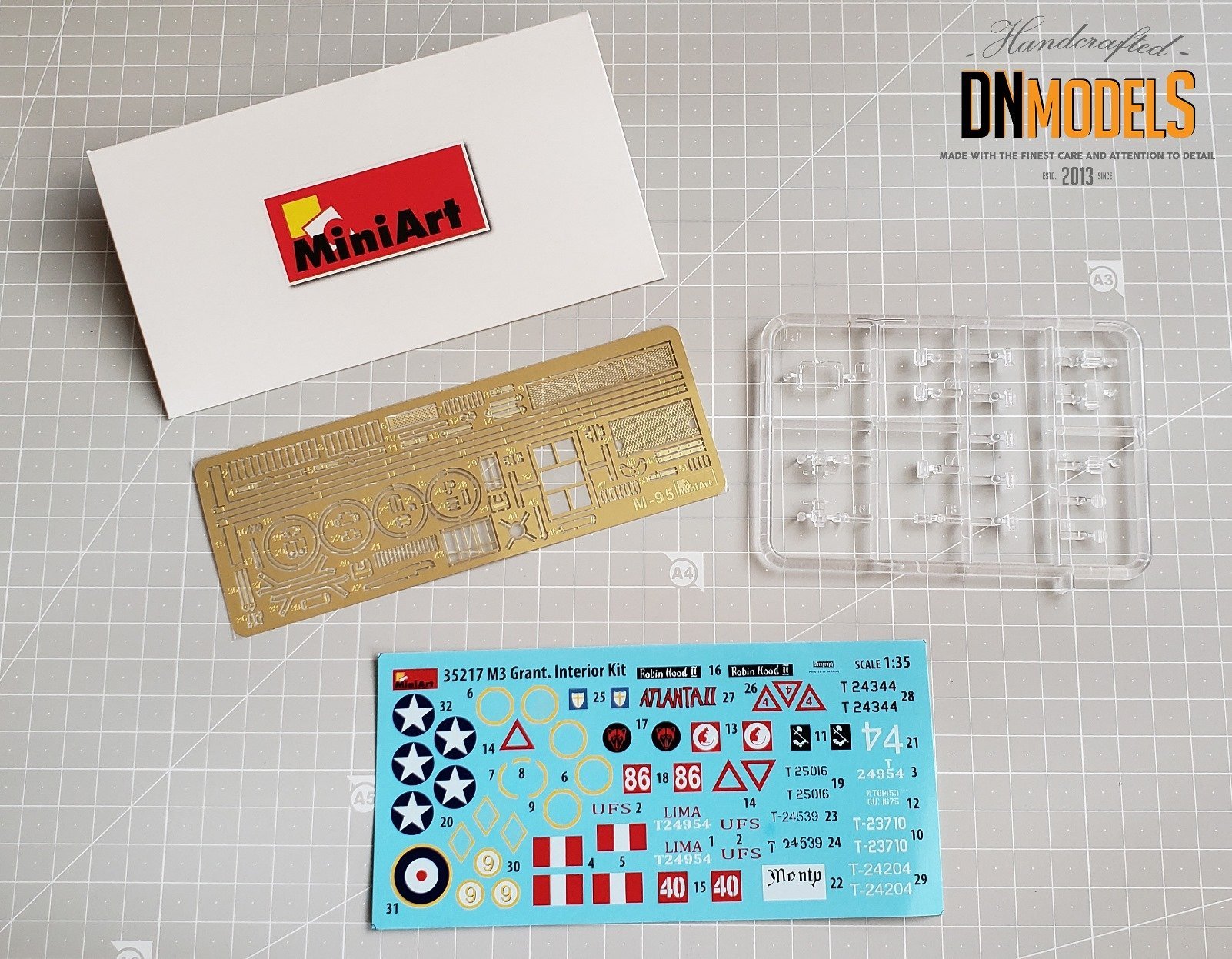 The clear parts were never of great interest to me when it comes down to armor modeling, but they are with the proven MiniArt quality and are relatively small sprue in this case. Nothing overly-interesting, and probably many will not use them at all. However, good job on that sprue too.

Total of eight variants are included in this set. This is unusually high number of different tanks, especially when we’re talking about a tank that wasn’t very famous. There are camo schemes that are single-tone and are very weathering-friendly. Alongside with those there are two- and three-tone camouflages. Repair and training unit tanks are included alongside warrior vehicles, but nicest impression makes the fact that Australian variant can be found as well. Pictures below should give you plenty of info that words won’t be able to, so enjoy: 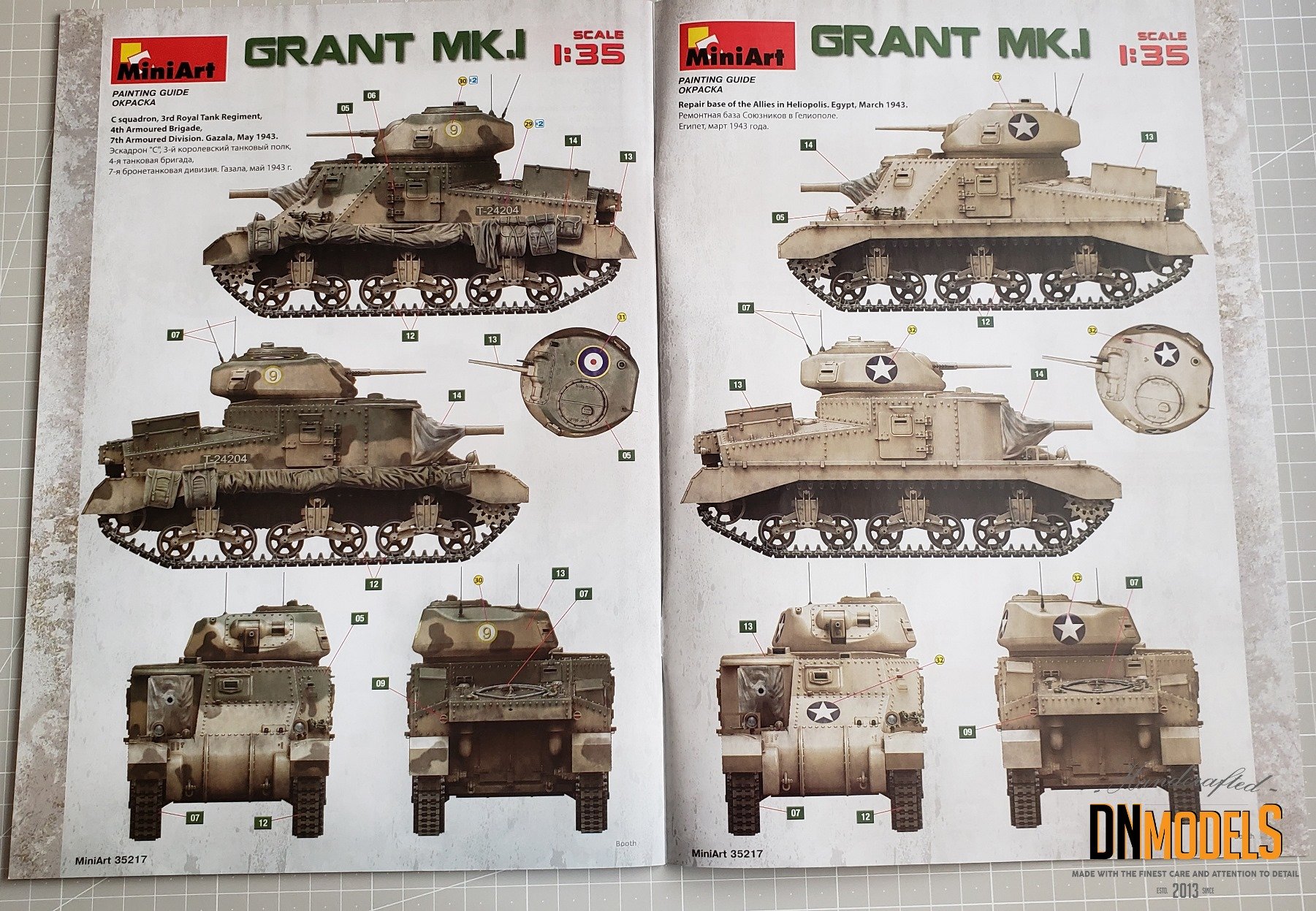 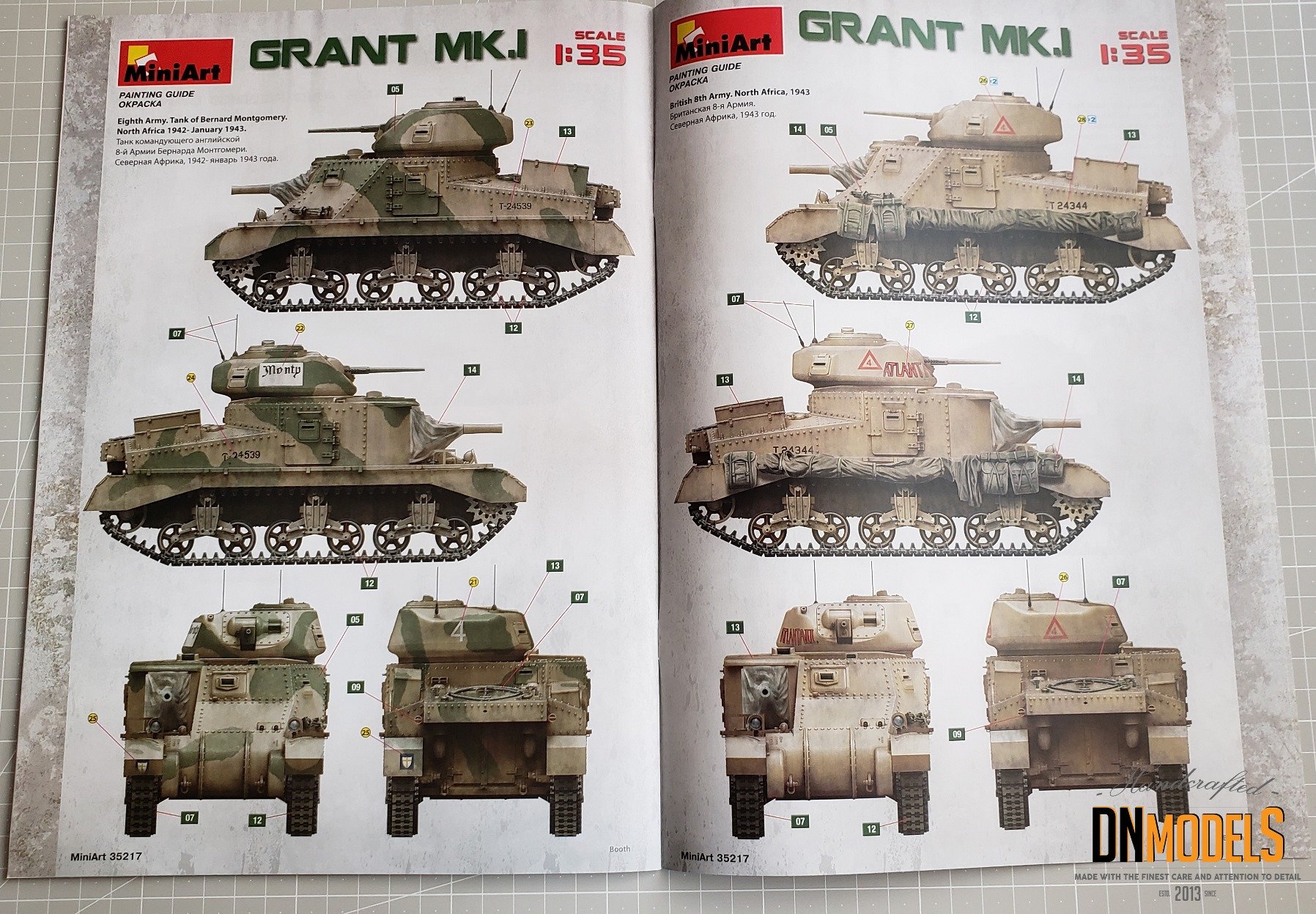 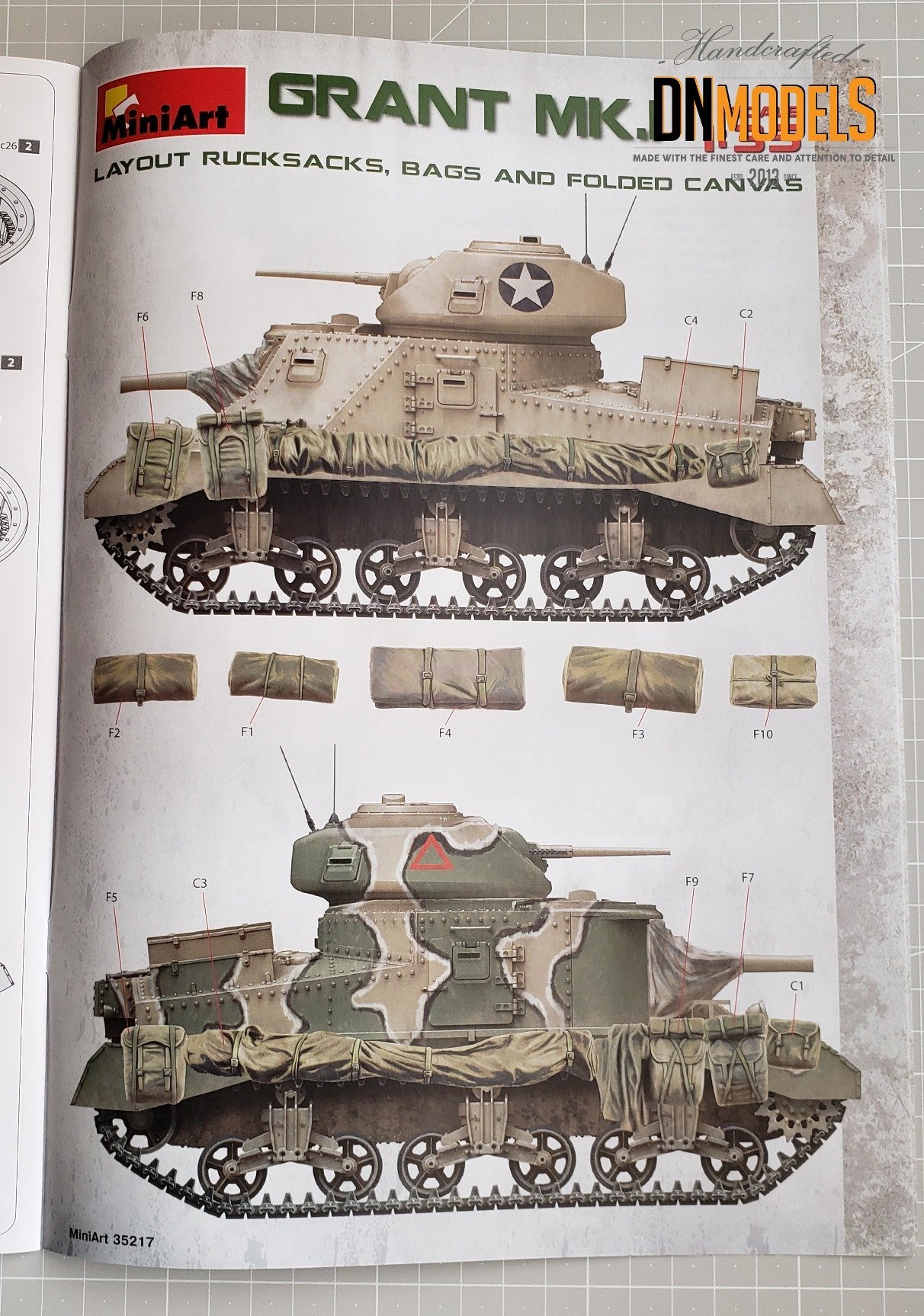 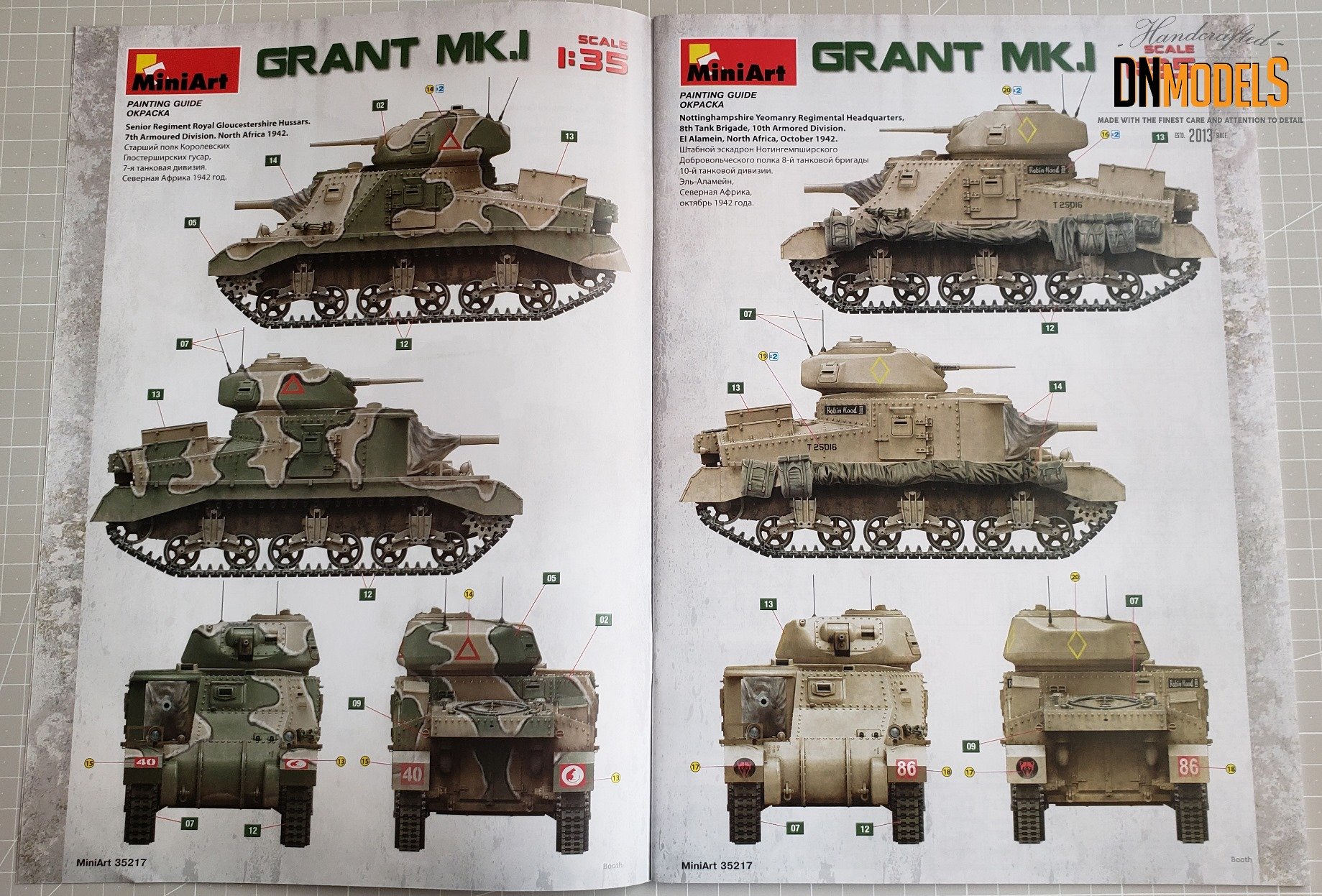 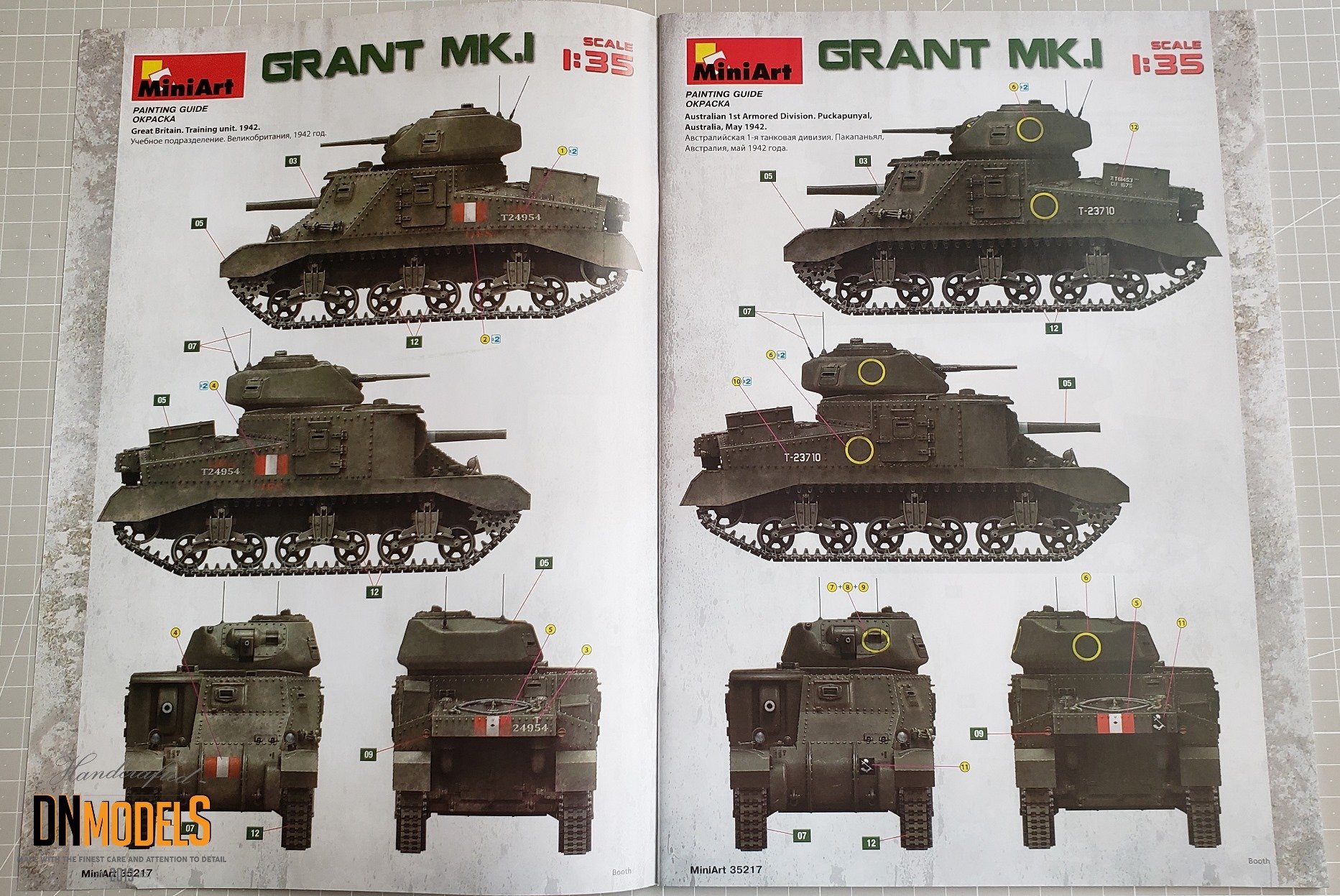 All the written above does not mention the downs of this kit. There are there, you can be sure of it. For example, there is some flash on some unpleasant places that will require your attention and some work. Alongside with that, despite the vertical appearance of the tank, the interior space will cause a lot of grief for those who love to work with space. The tank is crowded and in order to exploit all that MiniArt embedded in this tooling, some suffering from the modeler is required.

That is part of the 21st century modeling though. In conclusion, the kit is superb and the best thing about it is that it is a small part of a long line, just like the T-54/55 that MiniArt delivered. It will be the best Lee/Grant tooling for years to come and it will be definitely the one with the most features OOTB of all the offerings in 35th scale.

It is not recommended for novice modelers, except maybe if you don’t go into the interior part of the assembly. With that said, for everybody else – it is highly recommended and with the price/quality combo here, it is a must for Lee and Grant fans.