Flettner FL 282 Kolibri is considered as the first production helicopter in the World. Not surprisingly it comes from Germany, where most of the technical innovations are being made, even up to date. For its time, the concept was revolutionary, and exceeded – by far – the dreams of many.

Being an unseen flying machine at that point, it served a purpose as a proof of concept more than being an actual aircraft. From the practical standpoint it didn’t have the time to prove itself. Of course, this was typical for the era and especially the last couple of years of the Second World War.

With that said, the Kolibri was and is a milestone in aviation history. It was about time for a model to be produced and luckily, in our case MiniArt did it. With their devotion to details and various engineering perspectives toward modeling, there can hardly be any better choice for a company to represent the Flettner Kolibri in scale.

Blue side walls of the glossy cardboard were what surprised me when I first saw the kit. Miniart kits are usually either orange or red on their sides and the blue brought a different idea. The color of the sky hints that the company will give us more in terms of flying machines. Let’s hope I’m right.

The boxart is beautiful with a red Flettner FL 282 V-21 pictured on the apron, right next to a FW-190 in the background. The focus is toward the rotor and somehow it draws your attention to the fact that this is a helicopter.

Very neatly, Miniart picked a picture when one of the rotor’s blades covers the swastika and that way the authenticity was kept in a special way. It is quite annoying when you see models with boxarts when this was deliberately erased. It might be forbidden in some countries but it is still a history and modeling is all about accuracy. 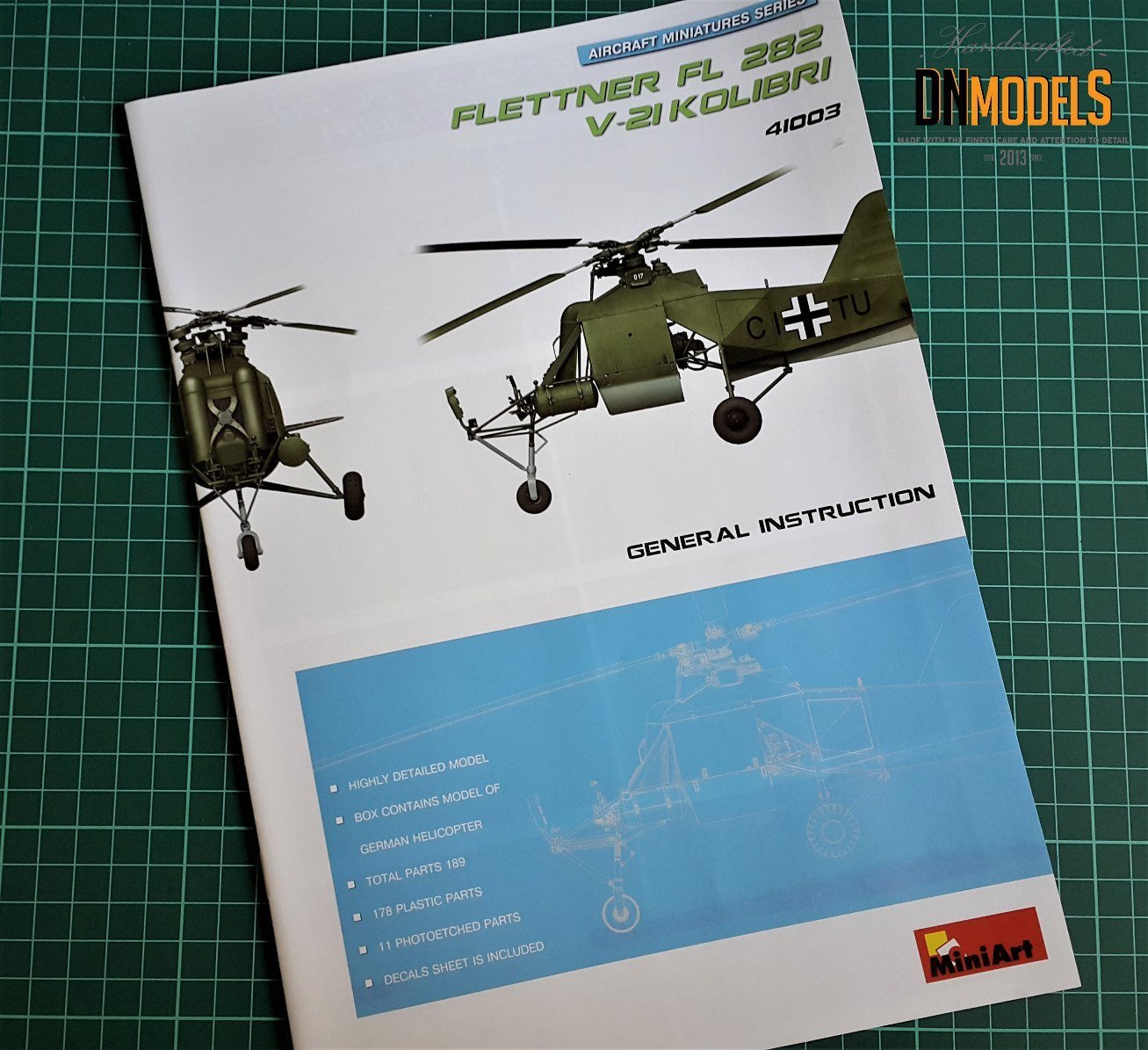 The blue-ish appearance is transferred onto the instruction sheet. It starts with a description of the model and some facts.

The sheet continues with some pictures of the completed mode and parts description. Everything is high quality in terms of material and depiction.

The steps themselves are not many. There are few devoted on the rear fuselage and its frame construction, a little more on the engine, which is superbly detailed and the rest is the tubular structure of the helicopter. The latter one includes rotor attachment, gearbox, fuel tanks and landing gear.

Rotors’ blades are last, alongside with the cockpit, if one might call it that. It is very simple, as with the original of course, but it still presents a very nice touch.

There is a modest number of sprues, especially for Miniart kit. However, everything is made in their specific style and you can feel the touch of their precision all over. The frame tubing of the Flettner is very nicely represented and I feel that it might be even a bit too delicate. 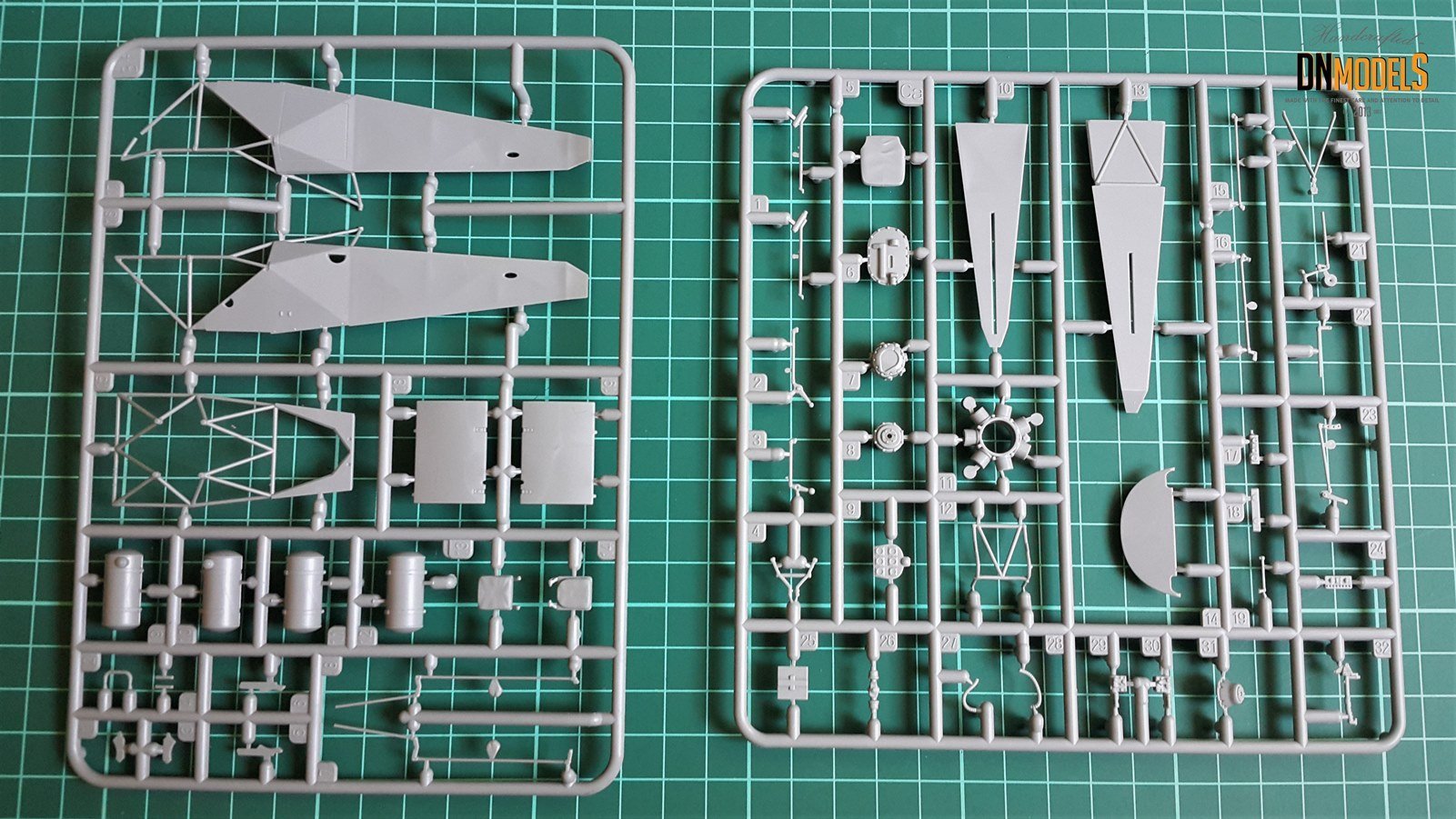 The number of parts is not great, but this is an aircraft model, where this is common. On the other hand, the way that everything is engineered suggest that this isn’t a kit for an inexperienced modeler. It is demanding, due to the size and the fragility of the parts.

The plastic is MiniArt’s standard medium gray, which is the new material that they are using in the last couple years. It is flexible and very suitable for projects featuring such tiny and fragile elements. 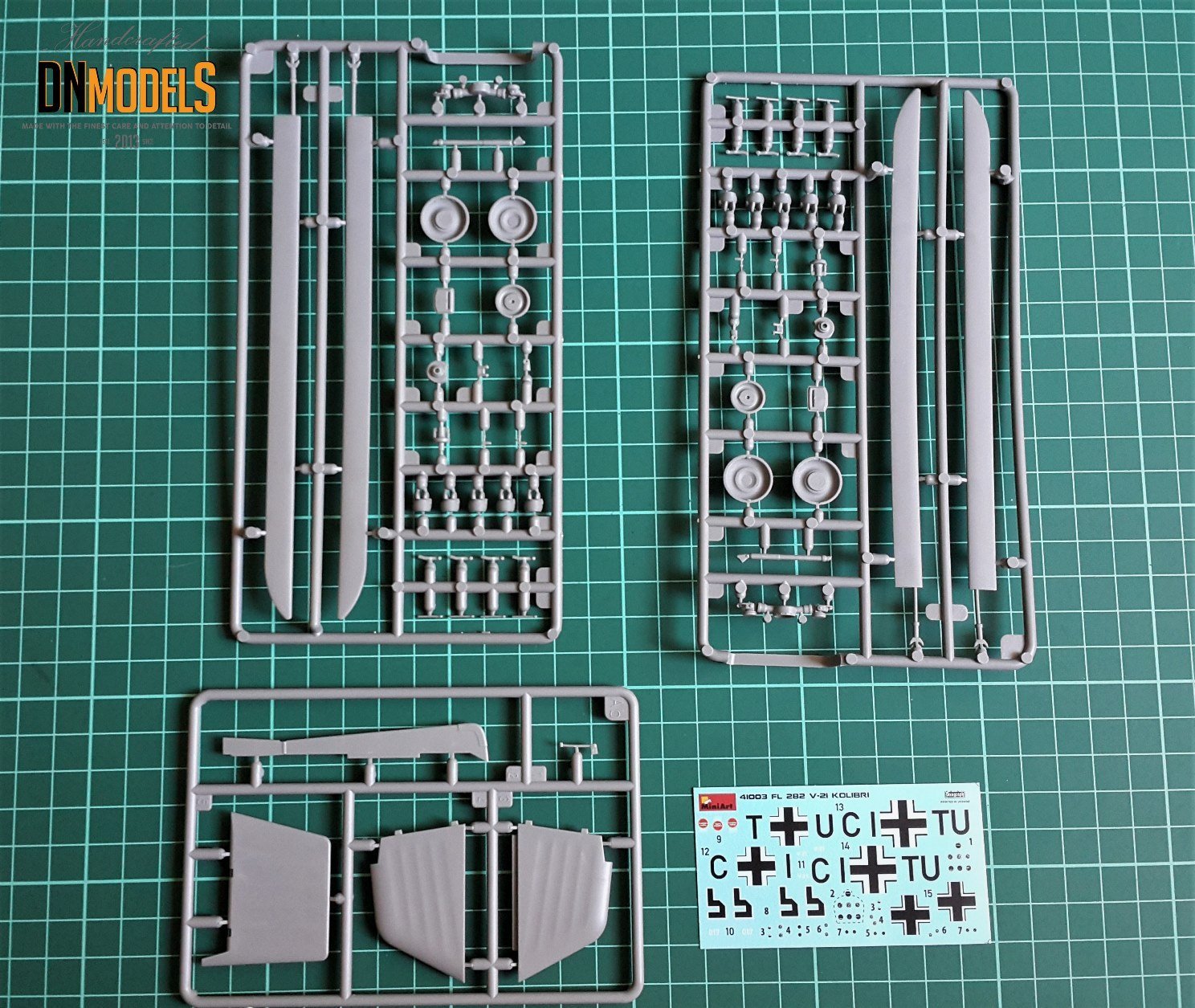 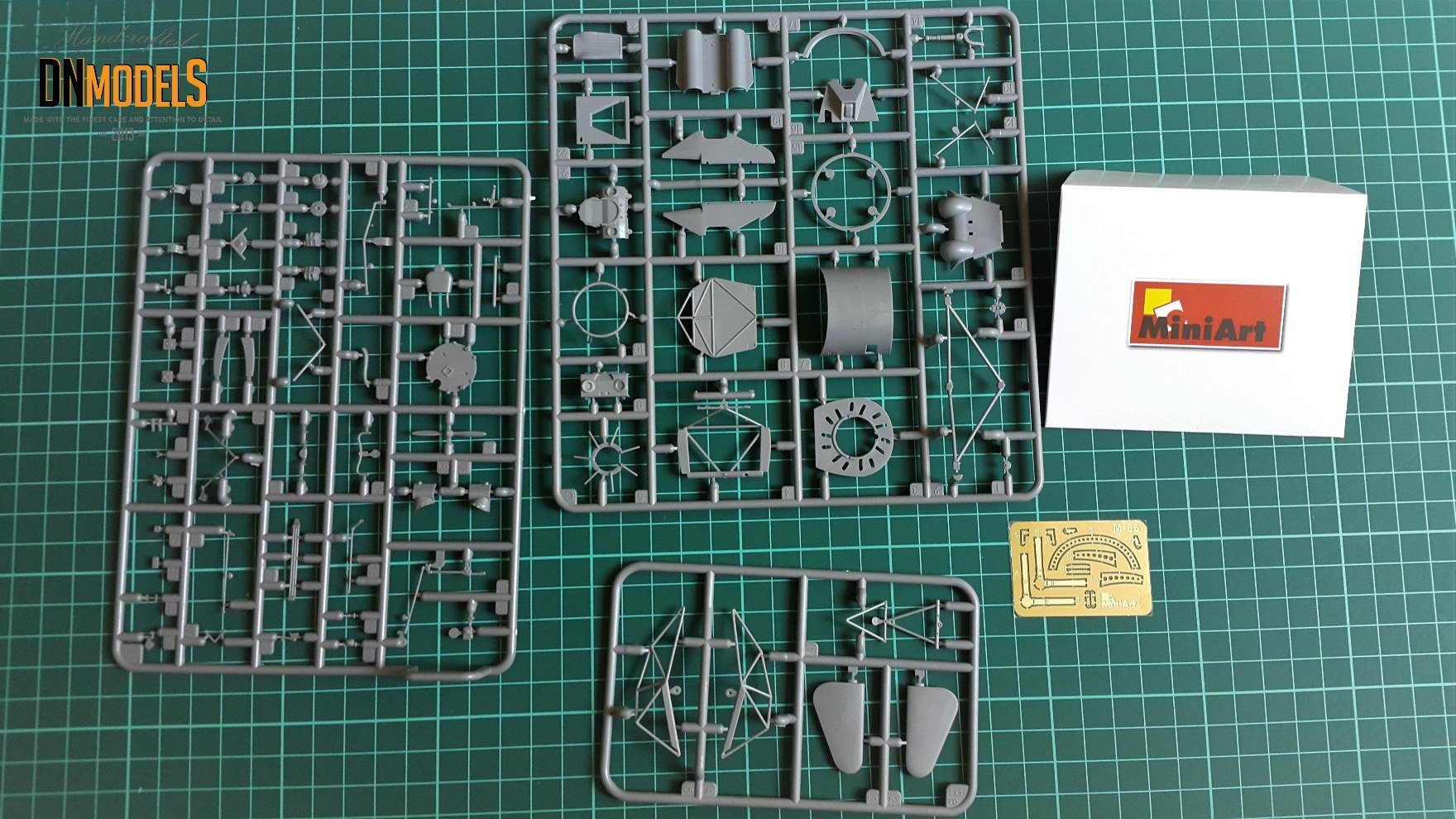 There is one option included in the set. This is the V-21 version of the Flettner Kolibri. It is from Schweidnitz, Germany and it dates from the period from May till September of 1944. The V-21 was a twin seater version of the Kolibri with the observer standing in the rear fuselage facing backwards. Right there, on the sides there are the insignia and the letters defining the specific aircraft. Interestingly, there are crosses on the upper stabilizers and there are crosses plus letters on their undersides. On the vertical stabilizer there is a swastika and two tone paint scheme. On the bottom side of the helicopter there is the RLM 65 and on the sides and upper parts – RLM 71.

In all, there isn’t much to that camouflage scheme, but the Kolibri’s charm comes from something else. 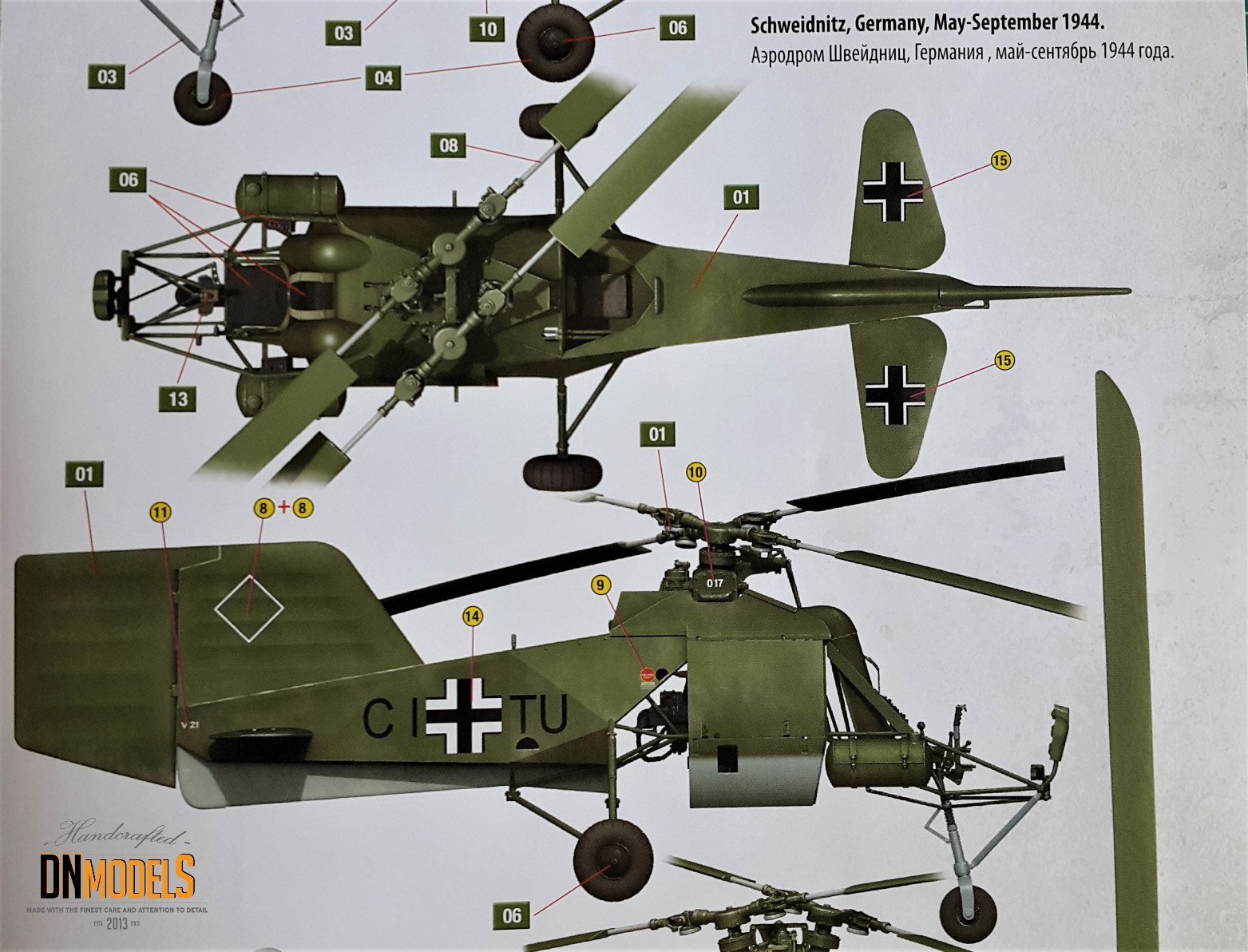 The first thing that struck me was that this box is small. But for such a small box, this kit contains a lot. The quality is exceeding the standards of today. The engineering is challenging, but for such small helicopter is perfectly matched. The simplicity of the real Kolibri is transferred into complex model which contains a lot of realism due to that same reason.

It is true, that information about Flettner V-21 is not so much and there might be some doubts about the overall accuracy. But as far as I am familiar with MiniArt’s approach I am pretty sure that they took the job very seriously. The kit in my opinion is absolutely necessary for any helicopter modeler. For a Luftwaffe modelers this is also a must. It is different in appearance and contains meaning non-standard for the usual German WWII model. Either Fl 282 V-21 or any other version that MiniArt offers, don’t pass on that kit with ease. It deserves a lot.