Many football teams have their commercial tricks, including fancy buses, merchandise, catchy TV commercials, accessories and so on, but only one have their howitzer! The first time I saw the Panzerhaubitze 2000 painted in the famous Schalke 04 blue I was stunned. It is one thing to promote the football game with the known resources, a whole other is to paint a military vehicle and to shout out : This is The Team! And not only a regular vehicle, but one of the best, if not The Best howitzer in the World nowadays.

But this is no accident. F.C. Schalke 04 is a team old enough to be called “most popular German football team”. The club dates back to 1904, where the “04” comes from. And in soccer as football is called around the world, teams are A Religion. Especially the old ones. Not only that, but this is part of the German Championship, or Bundesliga – probably the best football championship ever. Not to wonder that Forbes magazine named FC Schalke 04 – The Most Valuable Football Club and UEFA ranked them – 7th Best football team in Europe. They have enormous fanbase. 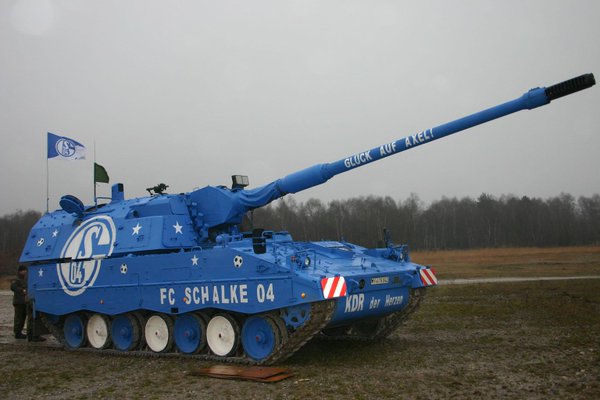 FC Schalke fans are probably most dedicated fans of all football fans, having even their own graveyard, again – dedicated solely to the team. They are no joke, I can tell you that. So what better commercial for such a great soccer club than to put their name on a huge gun? I doubt that there is…

So far they are 7 times German Chamionship Cup Winners, so I guess, not only one, but 7 howitzers would be better!

Fortunately for us, modelers /and for Schalke 04 fans of course/, there are kits on the market, representing PZH 2000 self-propelled howitzer. Revell have relatively old kit, but good enough. Meng came up with a new one quite recently, and even in two versions. Also, a Revell repack is available from MBK Models. No shortage of plastic to model from!

Of course, Meng Model, being the newest one is probably the best option, but Revell is not bad either, and I can stand by that info, since I got it from a very famous German modeler, who knows his way around scale models pretty well. And now, to make the picture perfect, I decided to add a new mask set from DN Models especially for that blue SPH. I just couldn’t resist to the temptation. It will be joy for the fans of the club who are modelers, and for the modelers who want something completely different in their collection. Not only, but a great gift to a fellow Schalke fan, from a modeler buddy! 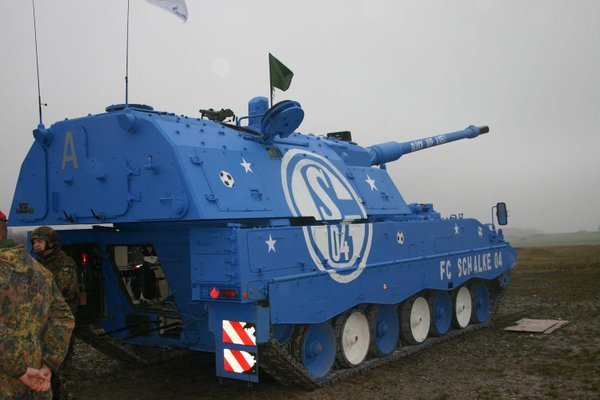 Eventually, that won’t be for every modeler out there, or for /again modelers/ football fans of other teams fans of that vehicle. We all know the constant feuds between club fans… But for those who want to make a nice and different PZH 2000, F.C. Schalke 04 mask set is a good option. Me personally, I decided to wait for Meng Model new Panzerhaubitze, with the additional armor /TS-019/, but now, since I know about this blue howitzer, I am certain, that I will build both of them. I am not a football fan actually, but it looks nice and mean. And the idea behind it is great. Kudos to whoever thought of painting the PZH 2000 that way. And Kudos to the German Army for allowing this to happen!

Masks for the F.C. Schalke 04 version can be found HERE

Kits in 35th scale can be found here:

Down here, you can check out the presentation of the new masks including this F.C. Schalke 04 set.