Dragon Sd.Kfz.252 is a German Halftrack based on Sd.Kfz.250 and used as an ammunition carrier. It was built by Demag AG and Wegmann during 1940 and then by Deutsche Werke in 1941. A little over 400 vehicles were built and they saw action at the first stages of the war. The ammo carrier was used to support StuG III carrying 75mm shells, as for that purpose a trailer was designed. It was Sonder-Anhänger (Sd. Ah.) für Munition (7,5 cm) (Sd. Ah. 32/1), and the combination between it and Sd.Kfz.252 is now easily recognized by every StuG III fan, especially those who love the initial versions of the Sturmgeschutz. 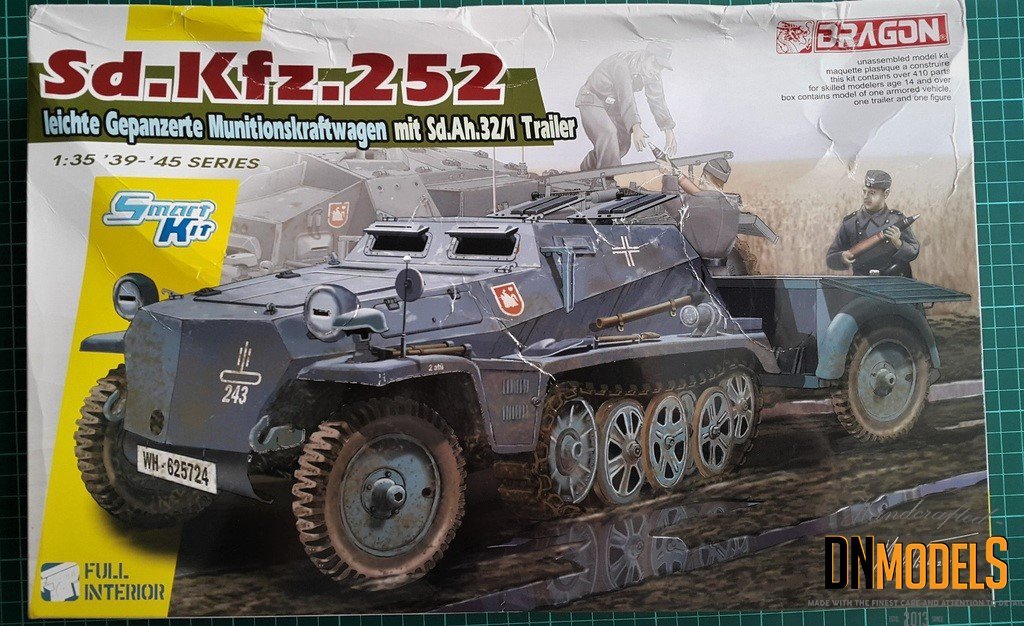 This kit was missing from the modeling scene for many years, with only 1/72 and resin /1:35/ options available. Dragon released early versions of STUG III recently andquickly realized the need of such an add on to their line. So, several months after their STUG III ausf.E , DML came up with the long awaited new tooling of the small ammo carrier.

What we have is a good looking box, not very small, probably because of the Full Interior featured in the Sd.Kfz.252. In 1/35, the vehicle is quite small though. The boxart is very neat, featuring a Sd.Kfz.252 with Sd.Ah 32/1 trailer, re-supplying a Stug III on the background. The fields behind it imply that this is Ukraine, but I am not sure that the vehicles of that kind were sent there. For European theater I am certain though.

The back of the box also shows some renders of the model kit, showing some of its highlights. Among those are some PE parts, magic tracks, 7.5cm shells. Full interior is also mentioned, although with the overall size of the Sd.Kfz.252 in 35th scale this is close to a nightmare. It is interesting, because in order to show the interior, the openings of the vehicle are quite limiting. So you either have to do some cutaways, or make a lot of pictures and close it forever.

At first glance we have typical Dragon Smart Kit sheet. Once opened, the pictures seen show the well known arrangements of the build, which is completed in 26 steps. Once thing I notice is that there are simplified here and there. Usually, we have most of the details of the kit represented and on the mid- and final steps here we have that too. In the beginning though, for whatever reason, Dragon made the vehicle quite simple, track lengths without texture, just two outlines from each side. One can only guess the reason for that. 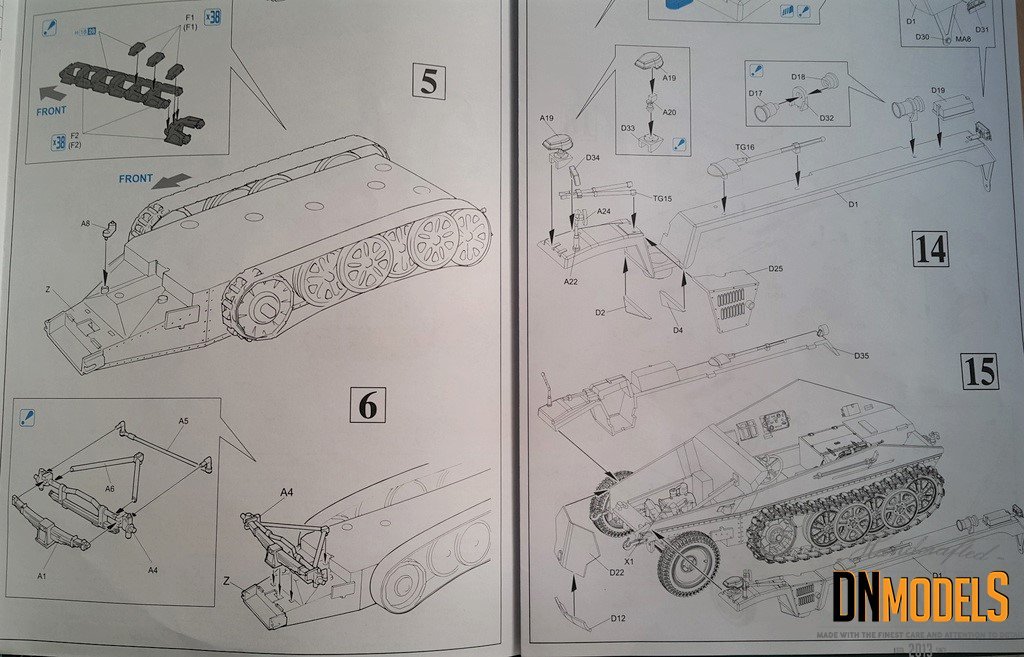 Check out how simple is everything to the left, compared to the right

One step of the instruction sheet took my attention immediately: this is Step 9, the engine build. There we have different colors and even a short one, it is depicted clearly and differs a lot from the initial ones.

Not yet certain are there any mistakes, but I guess there will be. If you continue to read you will find out why I think that.

We don’t have an overcrowded box with the Dragon Sd.Kfz.252, like we are used to with other DML kits. Everything is sealed in separate envelopes and luckily, since the box of my half-track arrived severely damaged. Now, the fact that everything was sealed and that the box contents are rather sparse saved the day! In this particular case it was a good thing. It will ring a bell though, with 410+ parts, full interior and a DML kit, to have such small sprue number. Not necessarily a bad thing though. It might turn out really good once built. 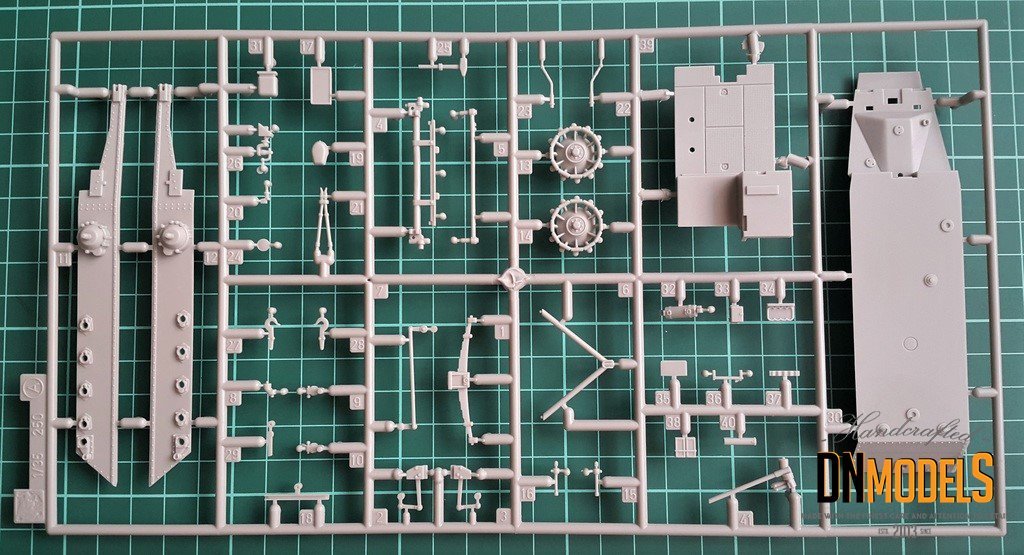 What I note is that the quality if the plastic is somehow doubtful. Yes, there are sprues with the well known Dragon plastic. But some of them appears to be different to my eye. Some of the details are perfect, some – a bit chunky. I have no idea is it my immagination here or Dragon changed something with this Sd.Kfz.252. The seats are beautiful, with the springs on the back, the gauges on the dashboard, texture on the seats. But still something is strange. I won’t comment anymore here, I will leave you with the pictures so you be the one to judge. 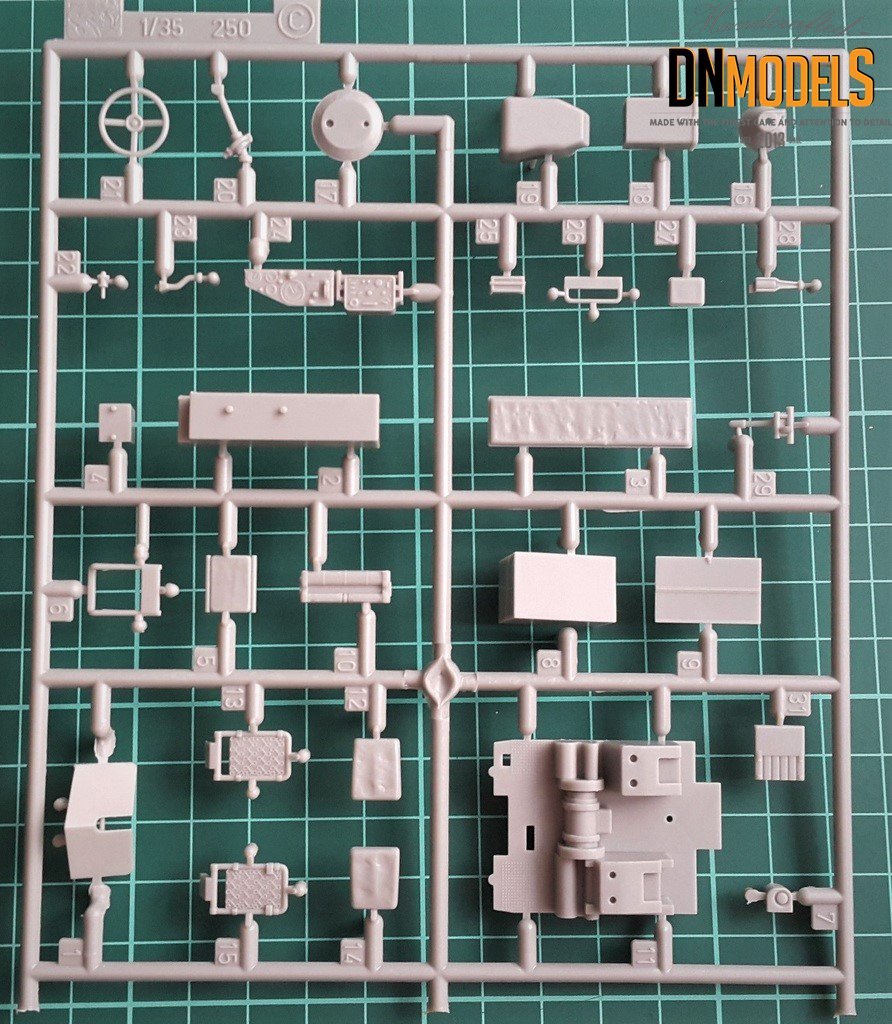 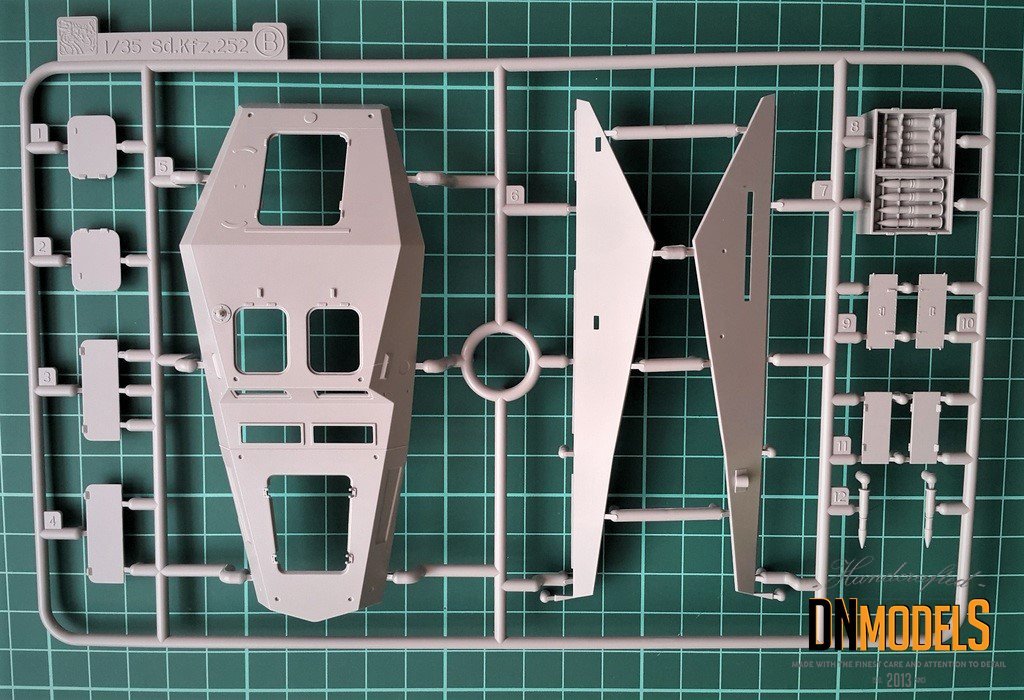 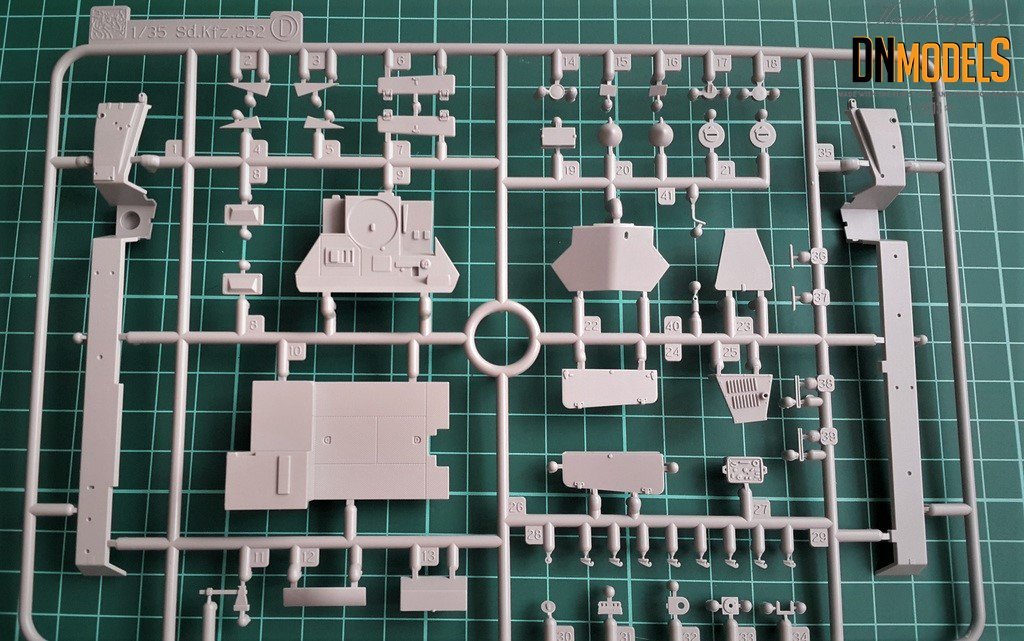 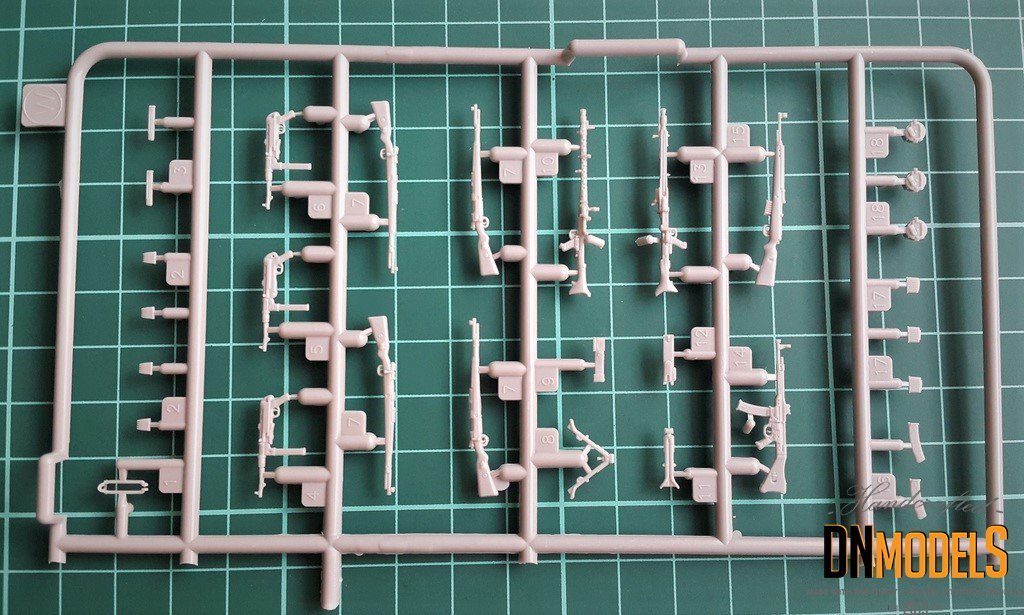 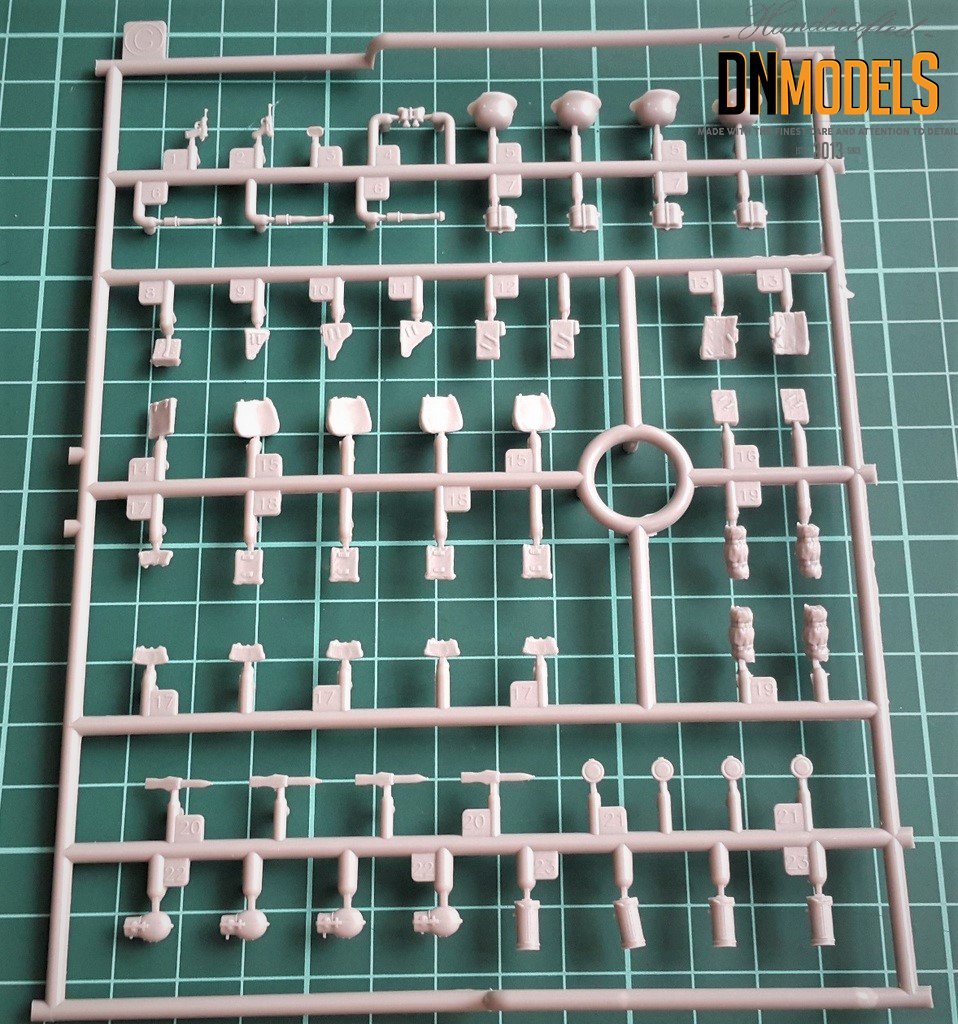 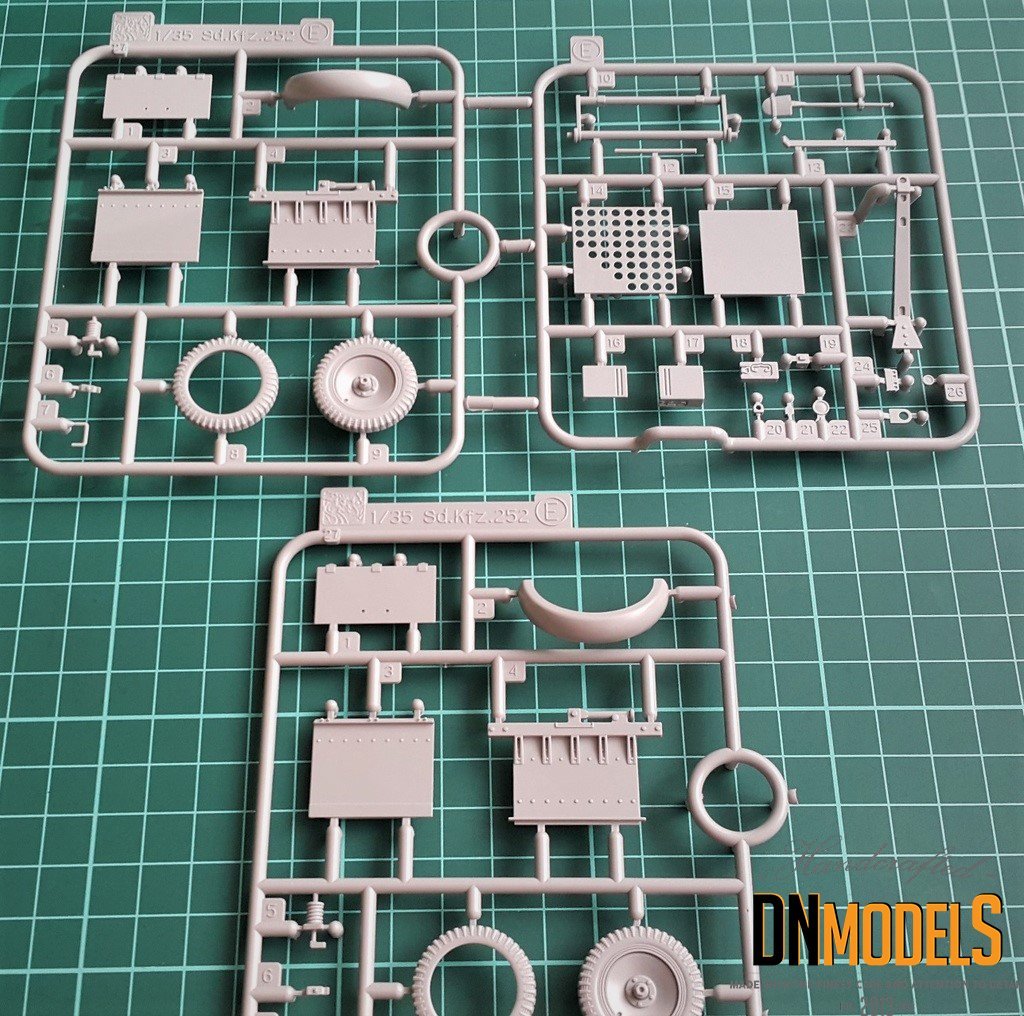 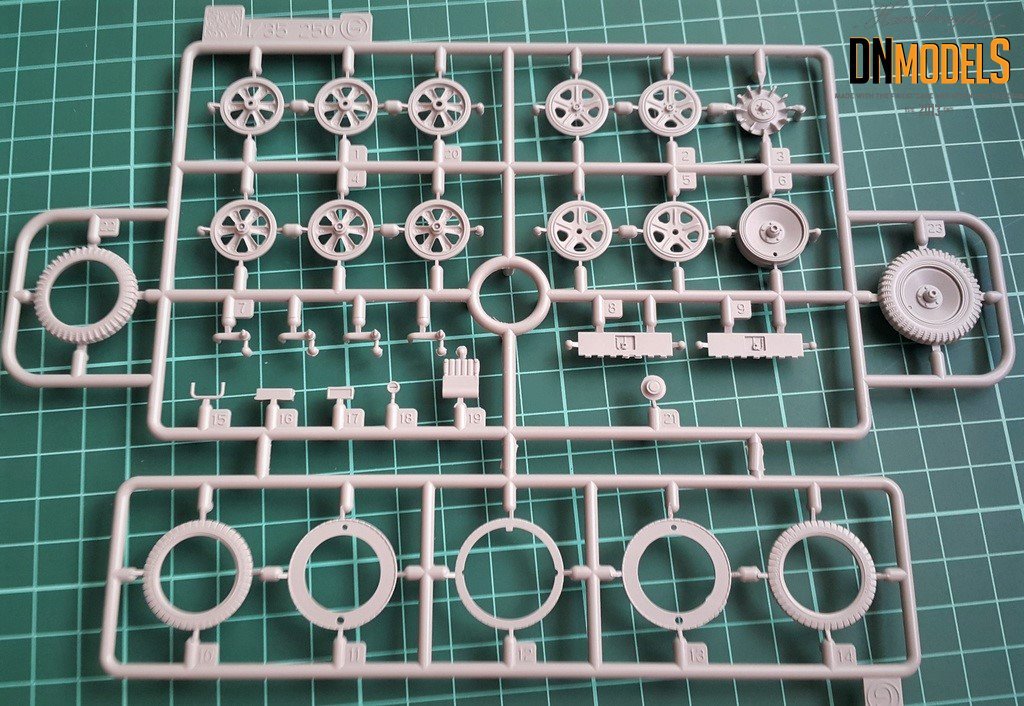 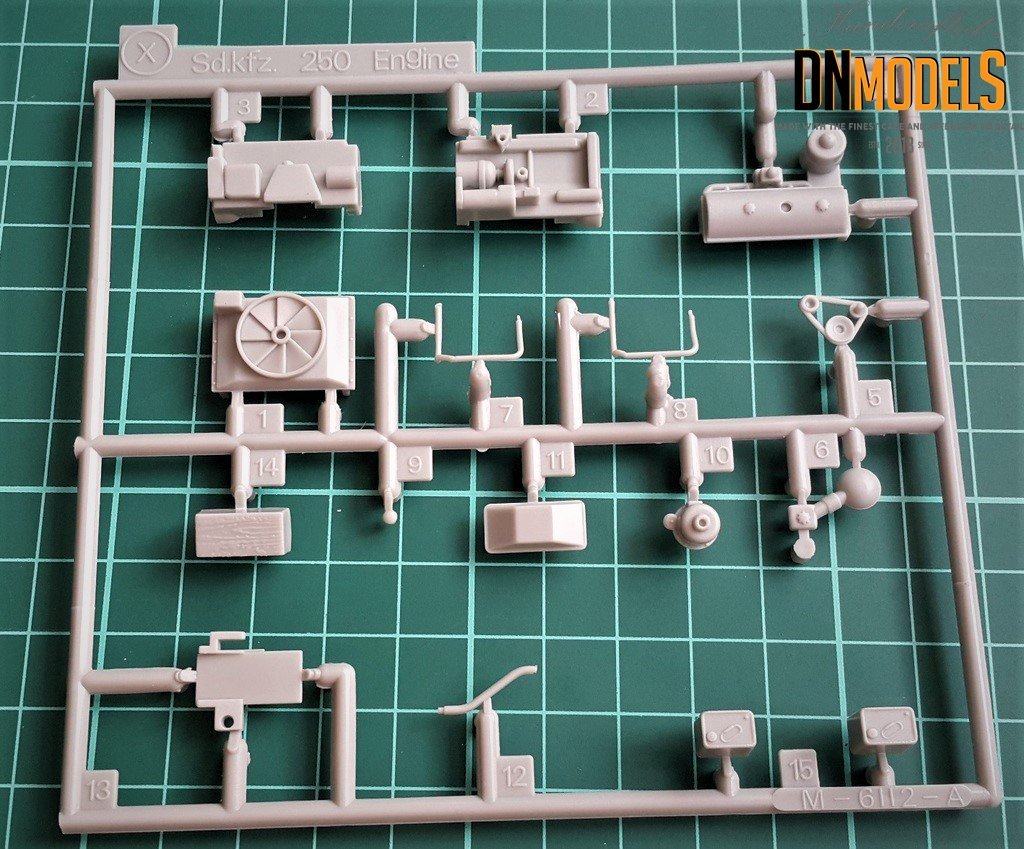 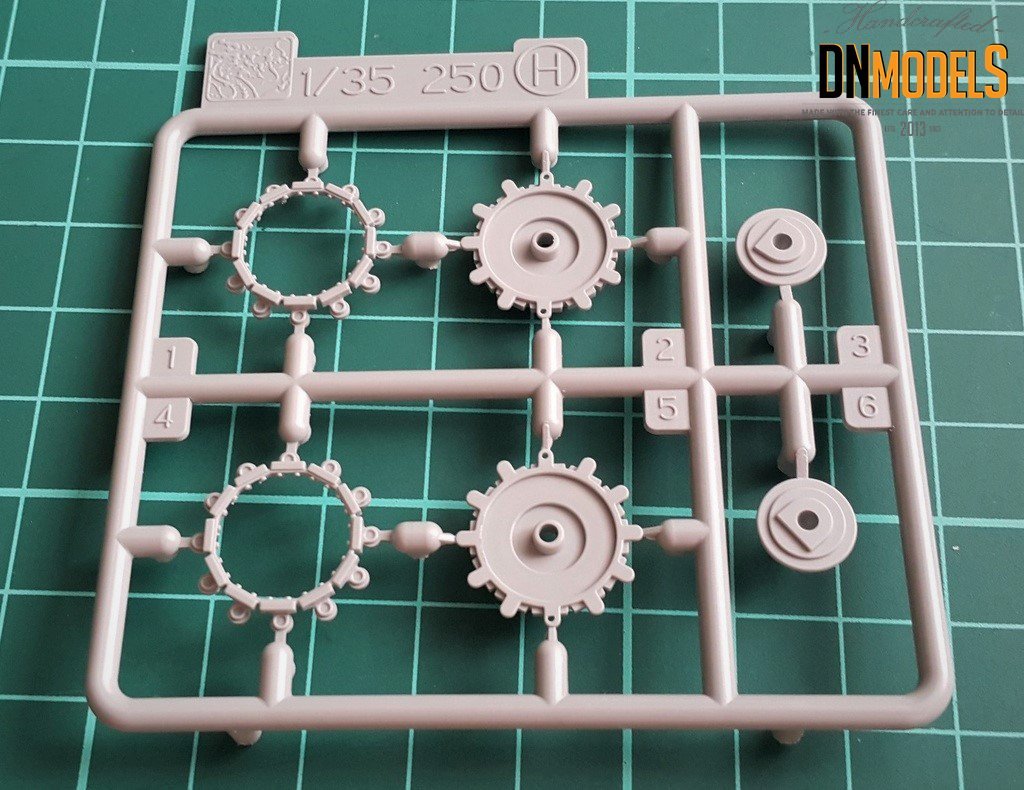 In an envelope we have the decals and three add-ons. Those are two photo-etch sheets and a metal tow cable. The smaller PE is 2 x 1cm /!!!/  and represents the bottom of the cartridges which goes in the Sd.Ah 32/1 trailer of the Dragon Sd.Kfz.252. They are optionable, since the trailer doors might be closed when you build the kit.

The other PE sheet is bigger: 2,3 x 5cm and holds the grills on the engine hood, some belts and other tiny parts. Both photo-etch sheets very thin and delicate, some of the best that came out from Dragon so far. One of the high points of the Dragon Sd.Kfz.252 set for sure!

In the envelope we also find a metal tow cable, described to be 270mm, however mine is 170mm. I am no saying fraud! here, I assume instructions were messed up. Like always with Dragon kits. Sd.Kfz.252 is a rather small vehicle as I mentioned numerous times here and 170mm cable is more than enough. 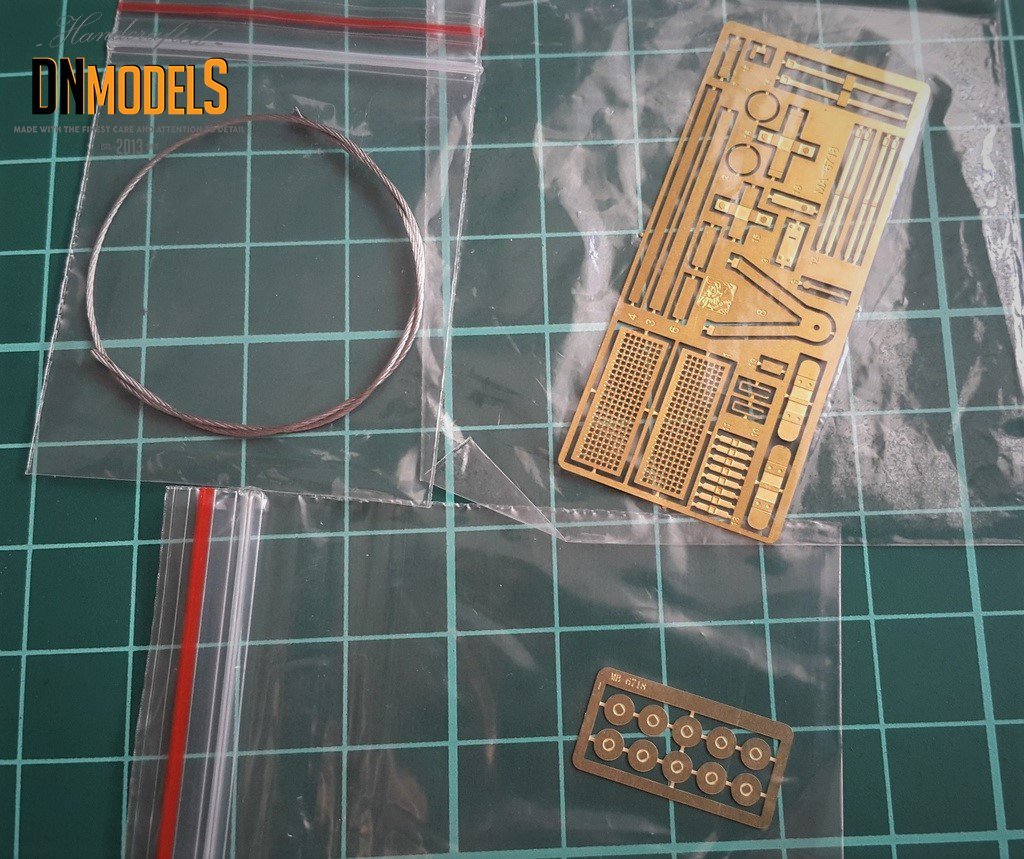 Magic tracks with Dragon Sd.Kfz.252!!! Wonderful news, besides the size. As you can see on the pictures shown, we are talking few millimeters here and two parts per track link.

Many many track links too. 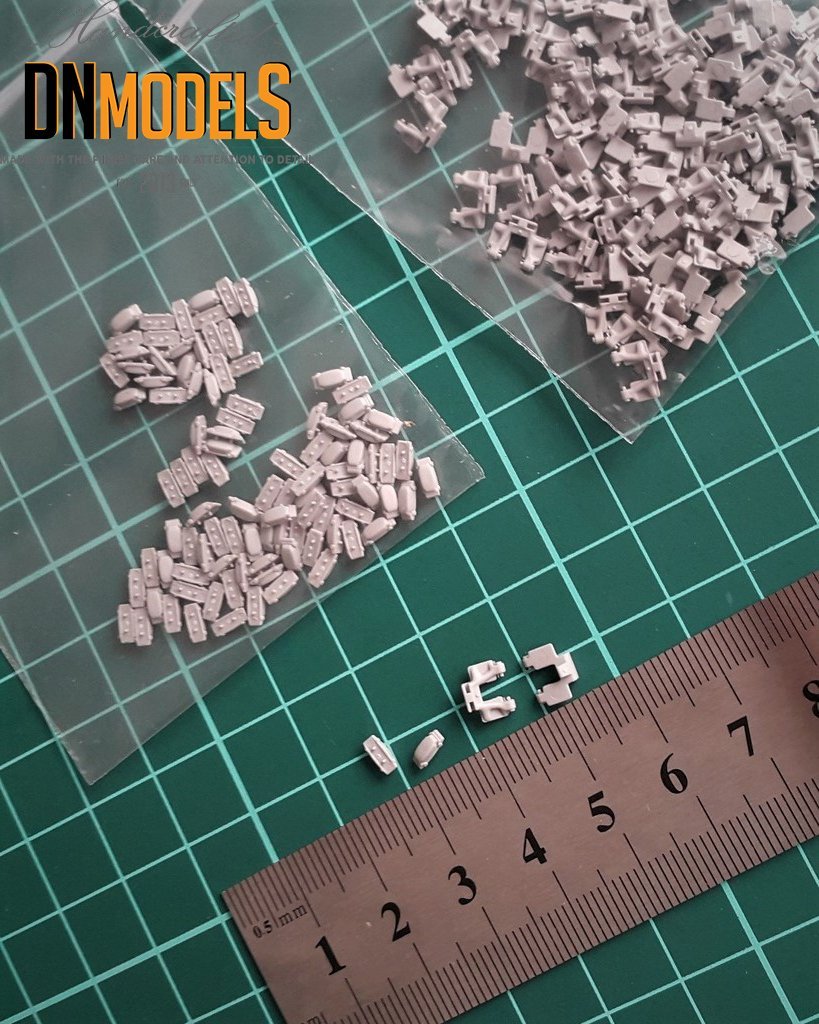 They appears to be workable, although with that size it might be a challenge to keep the pins unglued. I have a certain experience with the Sd.Kfz.251 and Sd.Kfz. 7/2. Tracks are time consuming! Is one thing I can promise you. They are not for the faint hearted or nervous modelers. Nor for a novice. So keep that in mind when scouting for Dragon Sd.Kfz.252 or any other German half-track from Dragon.

We have 4,5 x 6cm sheet here, which as everything else resembles a different scale, not 1/35. On it, we have WH- license plate letters, followed by 1-9 and 0 numbers, total in three sizes. Pretty much every vehicle number you can think of is available, just if you have that information. I doubt that many will find it though, since the vehicle is rare for its time, not to mention the lack of nice pictures with the license plates visible.

We have also white outlines for the fenders and the from plate. They are where the mentioned license numbers sits on. The German cross of course, and few emblems, on of which is visible on the boxart. Those decals are NOT replaceable by whatever mask set, so DN Models won’t be able to help here. If you wonder why…Way too tiny. 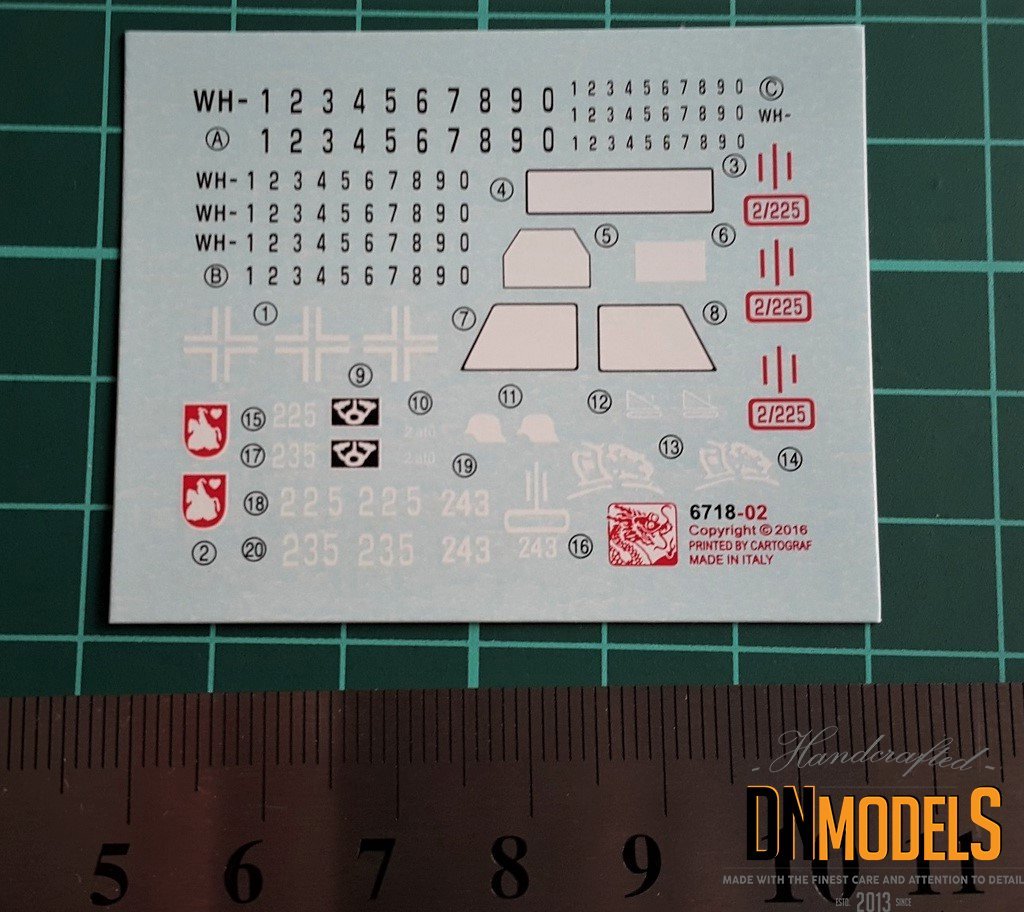 Besides, if you don’t trust Dragon decals, an aftermarket sets are available for Sd.Kfz.252, if, for whatever reason you want to use some. In my personal opinion, everything is good enough to go just with the crosses and eventually add an emblem or two. The other insignia or numbers can be covered in mud or winter wash.

We have 4 options. For what I know about the Sd.Kfz.252, it was used in Europe and I am not sure about Eastern front. However, the first glimpse that I had on the boxart reminded me of Ukraine, with that wheat field in the background. For those of you who haven’t heard about it, Ukraine is famous for wheat fields and that was one of the reasons Hitler wanted that area and probably it has something to do with the nowadays troubles there. Anyway – proving my point of the boxart, Dragon added options for one unidentified unit in 1943 and three for the Eastern Front. Maybe my boxart impression was correct after all!

We have three dark grey vehicles, typical for the era of course.

and an unidentified Unit from 1943 mentioned above, which differ from the rest with its two tone camouflage. 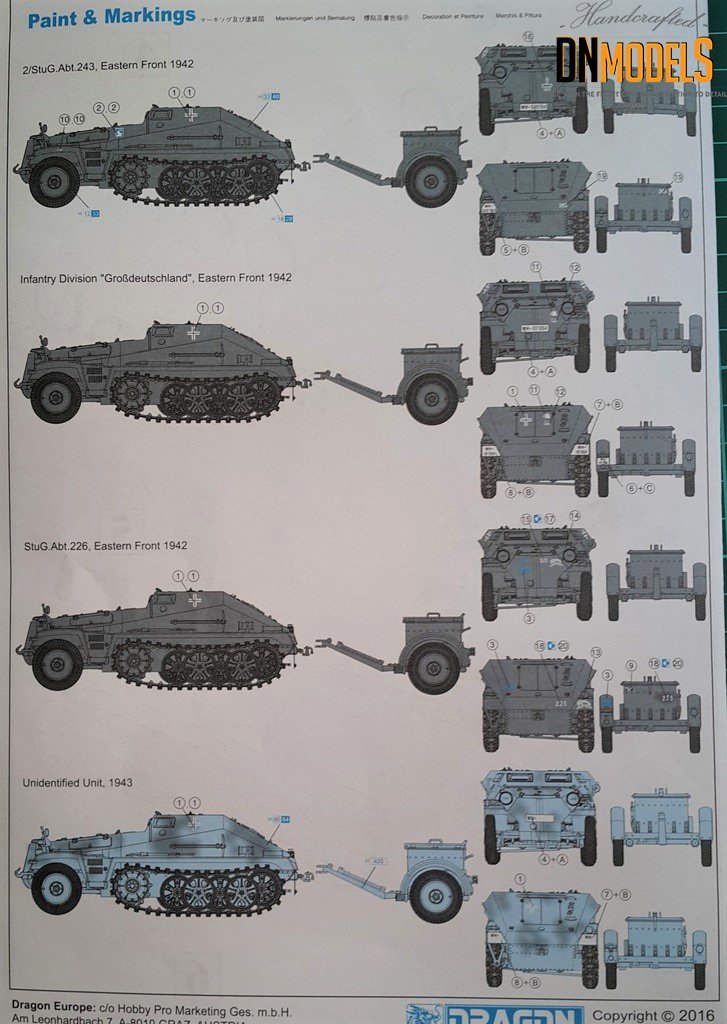 I haven’t seen any picture of two tone camouflaged Sd.Kfz.252 but I have seen several with Winter Wash, so I assume you can go ahead and proceed with your imagination for all four of those. Not a bad choice for camouflages here and hopefully they are correct ones!

DML6718 is one very anticipated add-on to every collection, especially for STUG fans. Among half-track lovers this is also a precious kit, especially the full interior considered. Even small, the vehicle have its own identity, which is without substitute. The plastic quality here is with some unanswered questions, as will be the plastic tires for some modelers. This is mostly because it is a mixed bag of Sd.Kfz.250, Sd.Kfz.251 and new Dragon Sd.Kfz.252.

However, the overall appearance and the fact that we have Magic Tracks in the set makes this kit an interesting one. With over 410 parts in the set, the only probable let-down of that Sd.Kfz.252 might be the price. I got mine for $65 delivered, but you can expect that to go around $55 very soon. 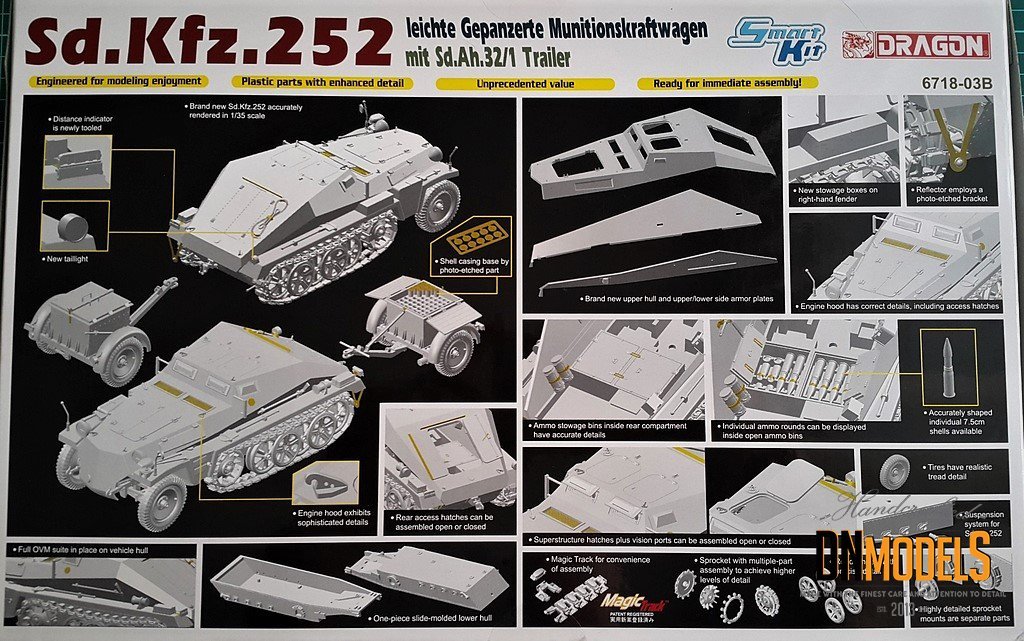 I might add that the kit is not suitable for a start-up modelers, since it is very little overall. The tracks might cause a lot of fuss – again due to the size. Also painting the ammo. But if you add this Sd.Kfz.252 with its Sd.Ah.32/1 trailer next to Dragon early STUGs, you will have a beautiful set comparable with a painting! If you are a fan of the early days of the WWII, you probably gonna love it!