This mask company has humble beginnings, dating back in the late 1990s. I thought you might like the story of how the idea came to live, and I will present it to you here.

Back in those days, I was building 1/72 aircraft. All kinds of them, all eras. Two main reasons for that. First was, these were the most popular scales in Eastern Europe back then. Second, these were the only one available on the tiny market share that scale modeling had in the 90s. There were mostly Italeri, Revell /late 90s/, Airfix and Heller. Czech companies I won’t mention, because their models were awful.

Same thing goes for the airbrushes. There were practically two options. First /available throughout the 90s/ was Russian crappy airbrush, which costed 10$ but was working as if it were sold for $2. Second was Revell single-action airbrush, which costed around 18$ back then, and was restricted by the lack of air supply. No compressors out there. None! Just home DIY stuff, made from old refrigerators. Other option – Revell gas cans which were everything but cost-effective.

So with all that at hand/which is pretty much jack $hit/ your options were – either become very good no-errors-in-the-process modeler, or be mediocre, paint with brushes and waste the kits /which were limited by all means/.

And a problem which is not to be skipped – enamel paints. Only. So except for using masks, leaving fingerprints is the other option.

So how do you make a mottling camo? How do you make a desert camo scheme on a Hs-129??? How?! The moment I got the Italeri kit in 72nd scale, I knew I was in trouble. And I like that bird a lot. So what do you do? Well, pretty much: explore, invent, risk it all. Mask it!

So I painted it all green, I made small balls of plasto, put it on the green and painted it yellow. And that was it with the desert camo of that 72nd scale nazi plane. But it worked actually. Hiding out with plasto the green spots. Masking them out in a way… Especially according to my humble standards back in a day that was the deal! Masking the canopy wasn’t still reached my mind, and I was painting the canopies with brush. Blah!

So next, I decided to try out more complex things. Splinter camo schemes on early Messerschmitts, F-16 two-tone gray separation and so on. Then a friend of mine asked me how he can make MiG-21MF 7701 /czech splinter camo/, and he was somehow having the idea that this is impossible to be done. Well, masks! So I masked it for him, and he painted it for less than 48 hours. And that was the way I did my Flanker too /check out previous articles. Flanker 32nd scale./

Meantime Eduard and Montex entered that business. They were having a lot of mask sets, mainly canopy and basic camo-schemes. They did a lot, but with different mediums. For me, Eduard was preferable. And then I got the idea of making specific masks for my own purposes. Special schemes windows and so on.

Yep, good idea, but with what material? So another friend of mine, who was in the business with marketing and commercials, told me that there are a lot of masking foil options and I just have to try out few before risk it on a model, and luckily for me, the 4th option was very suitable for masking and not peeling of paint out of the build model. And that was that! 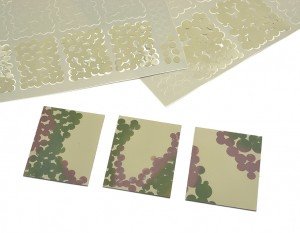 Withing a matter of months, I did my first mask set, called a “window masking set” /very lame, I know/, which appeared to be very attractive and a lot of modelers wanted to buy it. Then, a friend of mine from US told me – “you should turn that into a business…”

And the rest is history. Now DN Models have more than 50 sets of masks, with another 20 in the works just for the first half of 2016. We made some custom sets, as well as “upon request” items, and we still accept such offers. In general, the idea is to help fellow modelers. Nobody wants to build a kit for 5 hours and mask it for 4. Not a soul.

But with those products, we try to make our lifes easier. And the biggest appreciation we had was being published and praised by the Maste Modeler Michael Rinaldi, who featured our products in his TankArt 4 book /German Armor/. He used ambush camo mask sets to build his Nashorn and some markings mask sets for some other vehicles. We are very proud about that fact, and very grateful to Mr. Rinaldi for spreading the word about our existence. Not only, but we know that he enjoys working with our products. Which is a great boost for our will to make even more and variable sets of masks for all the fellow modelers out there!