Wherever we turn nowadays, we see Chinese production. Some of that is with acceptable quality, some is not. The thing is, everything comes from China because it is cheaper. Not that there aren’t nice things that are cheap enough, but Chinese goods are always cheaper. And many people fall into that trap. Well, it is not always a trap, but most of the times it is.

Chinese knock offs are very popular among people who use airbrushes. The reasons are many, but again – the knockoffs are cheaper. Parts for them are cheaper too. The performance though, well, this is the theme of the current article.

The reason I am writing this is because I decided to get a cheap, so called “high-precision” airbrush and compare it with the rest, based on my experience and needs. The one I choose was Spirit Air 180. That is the same as Veda WD-180, Haosheng HS-80 or whatever else with -180 from the Chinese airbrushes available on the market. That is a dual-action, gravity feed airbrush, featuring tail-stopper and a MAC valve. It is with .2mm needle, 9cc color cup and a crown cap and it is considered as a high-precision tool. 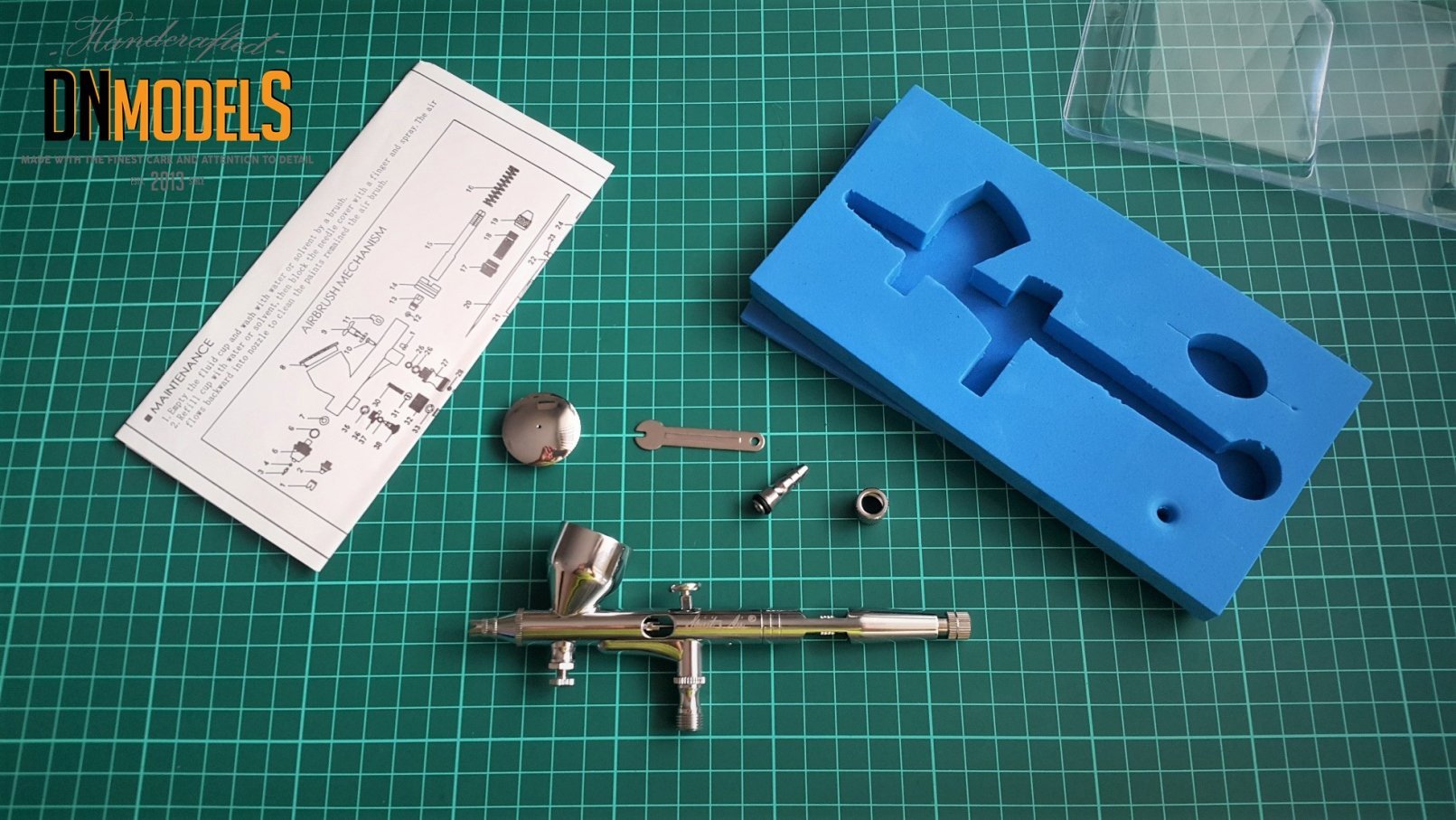 The engraving “Spirit Air” on the side of the airbrush was the reason to pick that -180 option. There were many more, but this was the most decent looking picture-wise. I payed around $15 for it. Give or take a dollar for any possible currency exchange rates.

The airbrush came in a cardboard box, instead of a proper case /which was mentioned in the description/. I’ve had other Chinese cheapos, but that was a first with cardboard box. Anyhow. The box isn’t something that I would whine about, since I ordered that tool only for testing purposes and eventually emergencies. 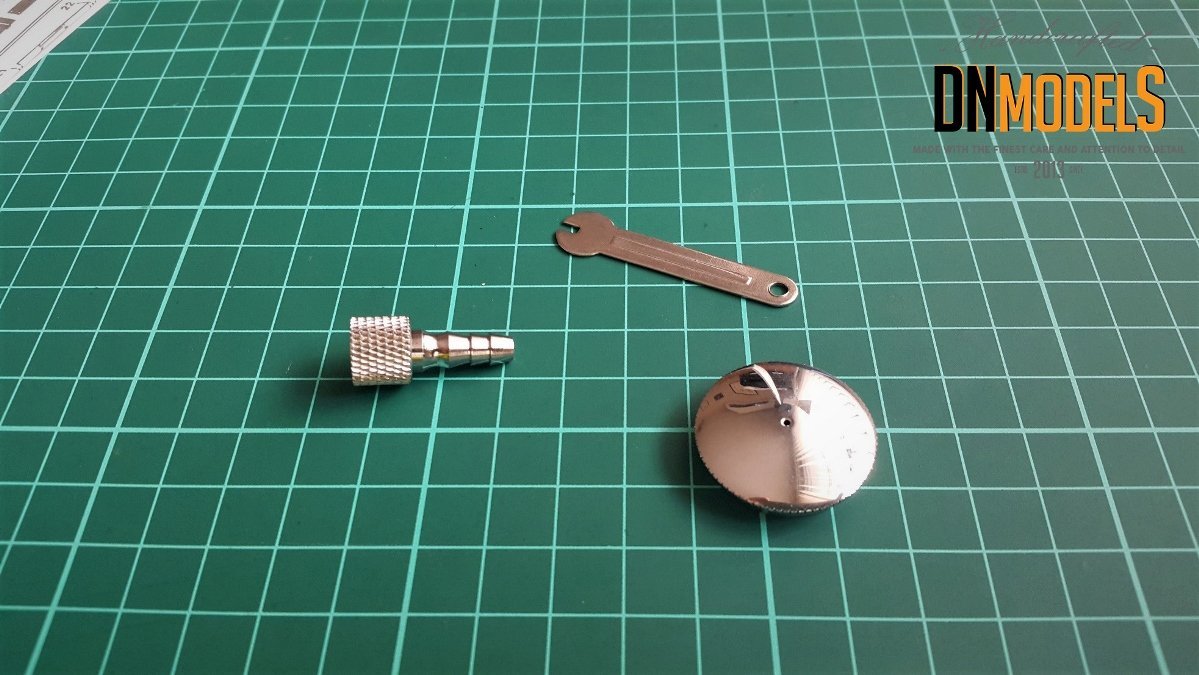 There is the standard blue foaming, in which the airbrush sits. Alongside with it, there is a wrench for the nozzle, a hose connector, with braided entry into the hose and an instruction sheet. The hose connector is meant to be used with standard pneumatic hose, not an airbrush-specific one, which sometimes is very handy.

Instruction sheet is modest single page thing, with basic guidelines on the airbrush and a schematic of the airbrush parts. The description of each part follows, numbered properly, but I believe that is useless, since a needle-nozzle combo usually costs couple of dollars and the whole thing costs $15-20. I would buy a new one instead, and that way I would have a lot more spares if something happens. This is just in theory of course. 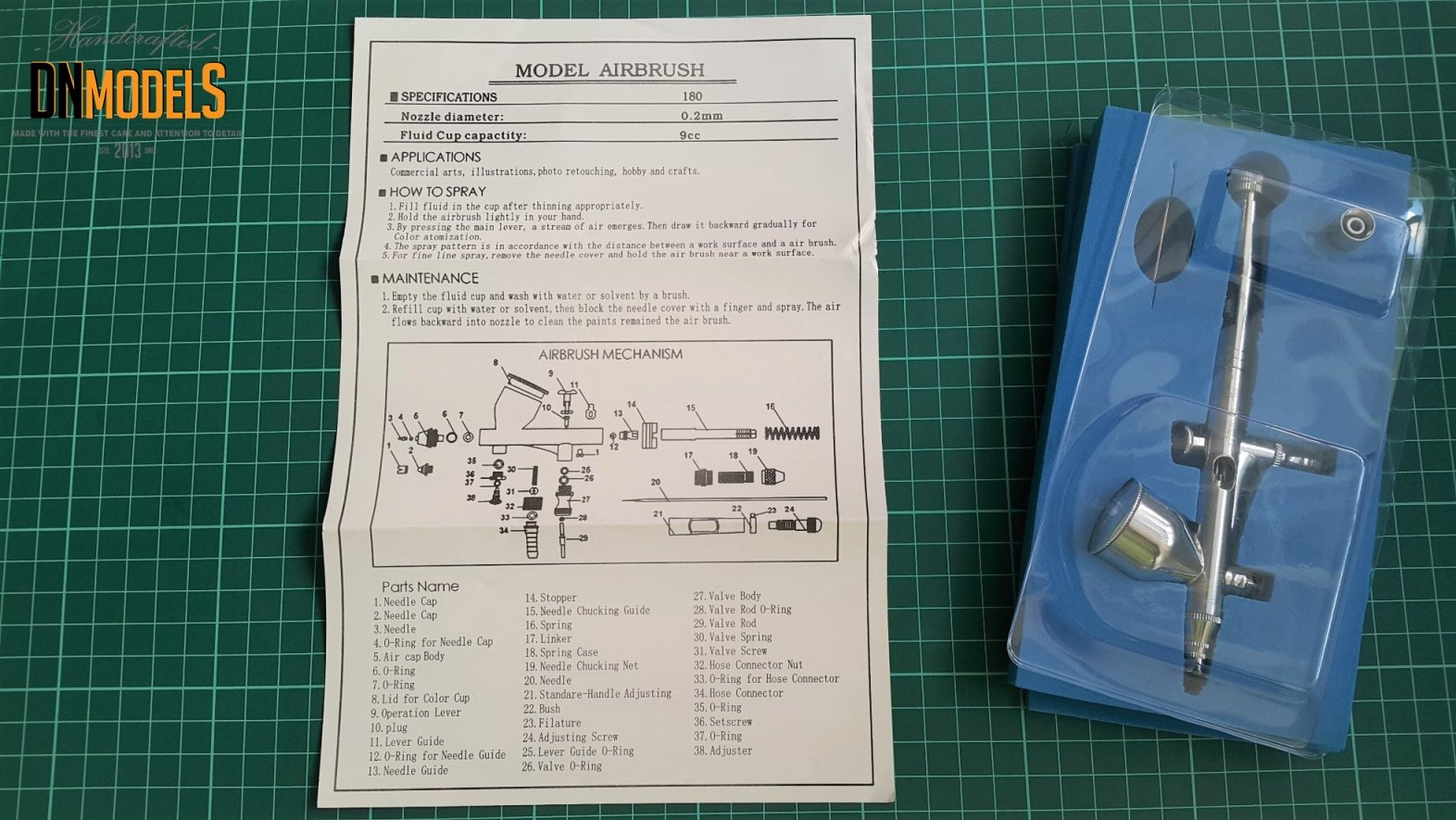 The million dollar question is how that thing works. And the answer is – OK. It is not brilliant. It is far from it. It isn’t that bad either. What you should know is that the craftsmanship used while producing this tool was at a mediocre level. When you pull the trigger, you can feel the moving parts and that there is some friction which you almost never feel in a high-end airbrush. Lubing them might help, but you will still know that it is there. And annoys people who own better airbrushes. 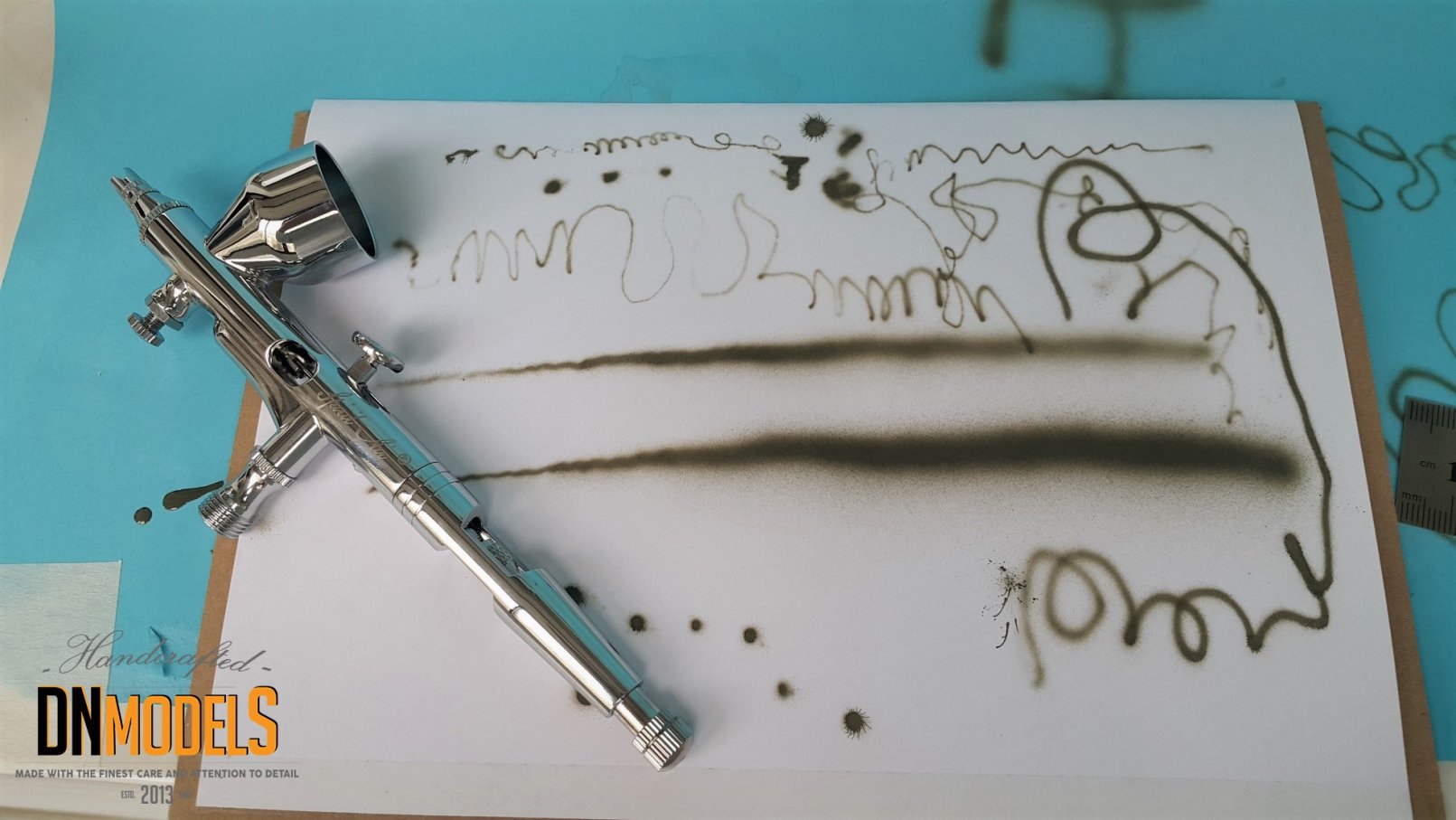 The weight is fine, and the tail stopper works as expected. What is interesting, is that the airbrush can create very fine lines from the get go. Without any additional needle polishing, lubing or whatever preparation of any kind. It is not consistent to the maximum, which is one of the major let downs of the tool, but it does provide.

Using properly diluted paints and correct pressure would help in this case. With that said, you can still expect some surprises and not perfectly equal lines. But let’s look at that from a different perspective: if you are a professional airbrush user, you won’t get this as an everyday tool. If you are entering into the world of airbrushing, well, you will be overwhelmed with what this tool can do. So I think that is part of the million dollar question’s answer. 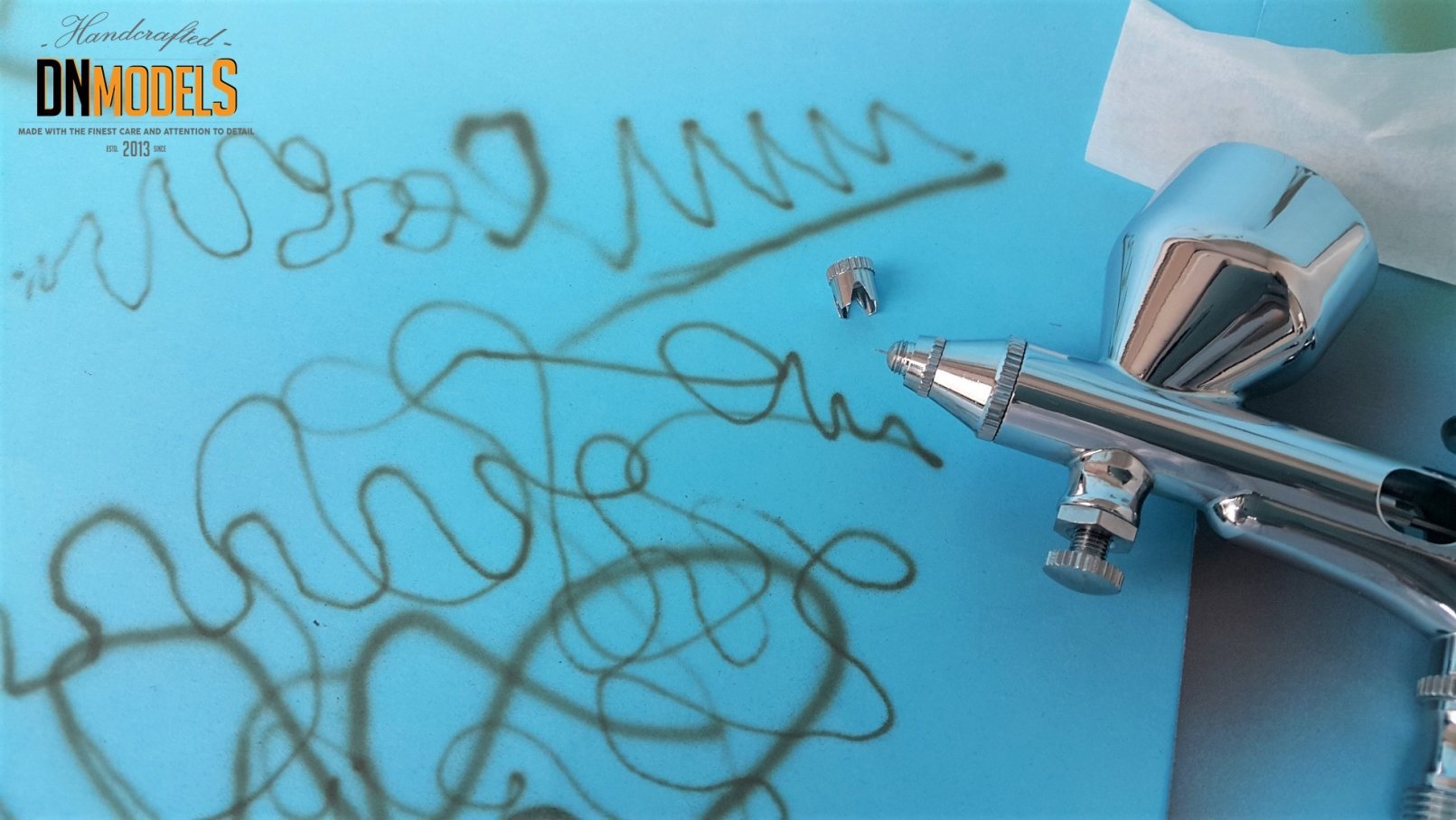 Trigger is smooth enough considering the price and for larger areas it works even with that .2mm nozzle. So general coverage is doable, as well as fine lines and a quick transition between both. At least that is what I test always when spraying.

Crown cap allows for quick access to clear the needle from any paint residue while airbrushing during dry days, although you have to be extra cautious, since it is .2mm and it is easily damageable. Other than that everything works. Not perfectly smooth, but acceptable. 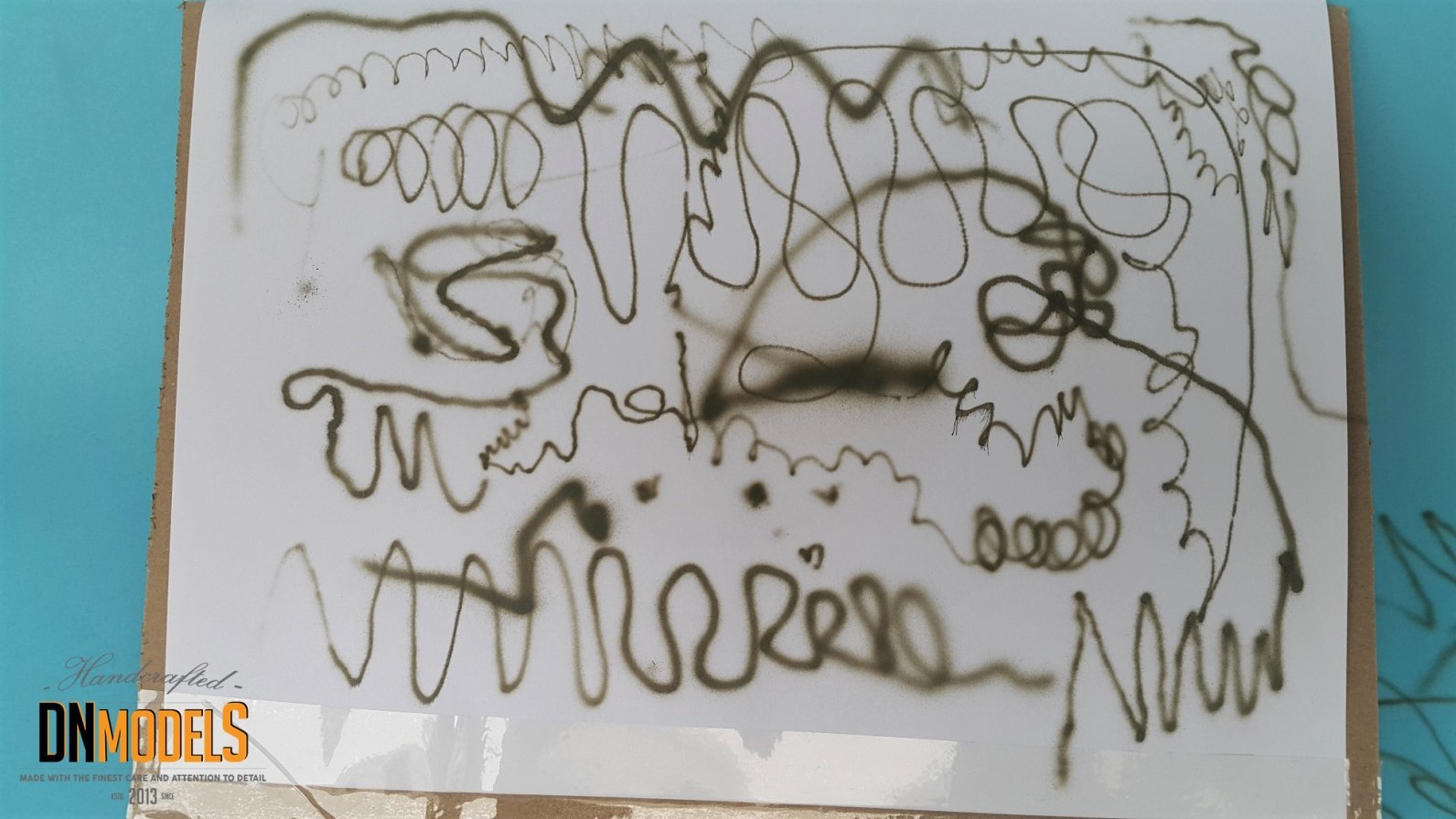 That is a feature that some find very attractive and some never use. I have used it, but frankly – only couple of times. It works here, but again – that friction can be felt while using it. It limits the air to the nozzle and it does it smoothly, so you might find it comfy for some applications. The combination with the needle stopper, proper PSI setting from your compressor and well prepared paint will do the job for sure. Actually, I own couple of other Chinese cheapos without it and in the end it is probably better to have it, than not. You pay the same price anyhow. 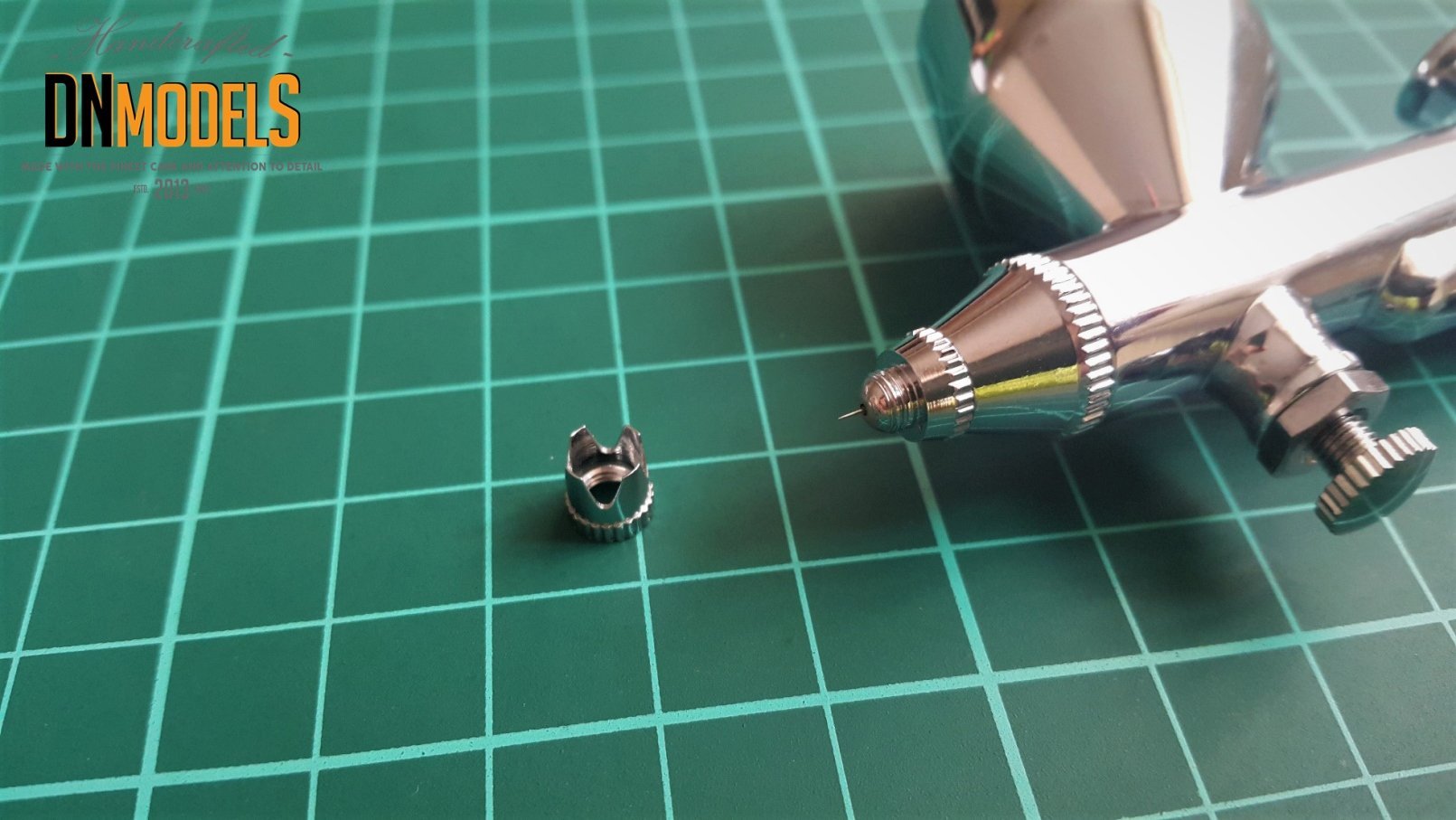 Is there any reason why?

So what would make someone buy this airbrush? Price isn’t the only answer. A decent tank kit in 35th or a plane in 48th will cost more than $50-60 nowadays. So buying an airbrush that costs fraction of that is not the best idea. At least not if you are into modeling and you wanna be a pro.

However, having such tool might be a good back-up option. I have couple for such purposes. I would never use that for painting a difficult camo scheme on an expensive kit. But in case I damage my main airbrush, and need to finish something, this is an option.

It was not that long ago when having an airbrush was a cool thing and not many were blessed. I remember those times and I feel lucky that I own several guns nowadays. So the option of having one too many is non-existent. 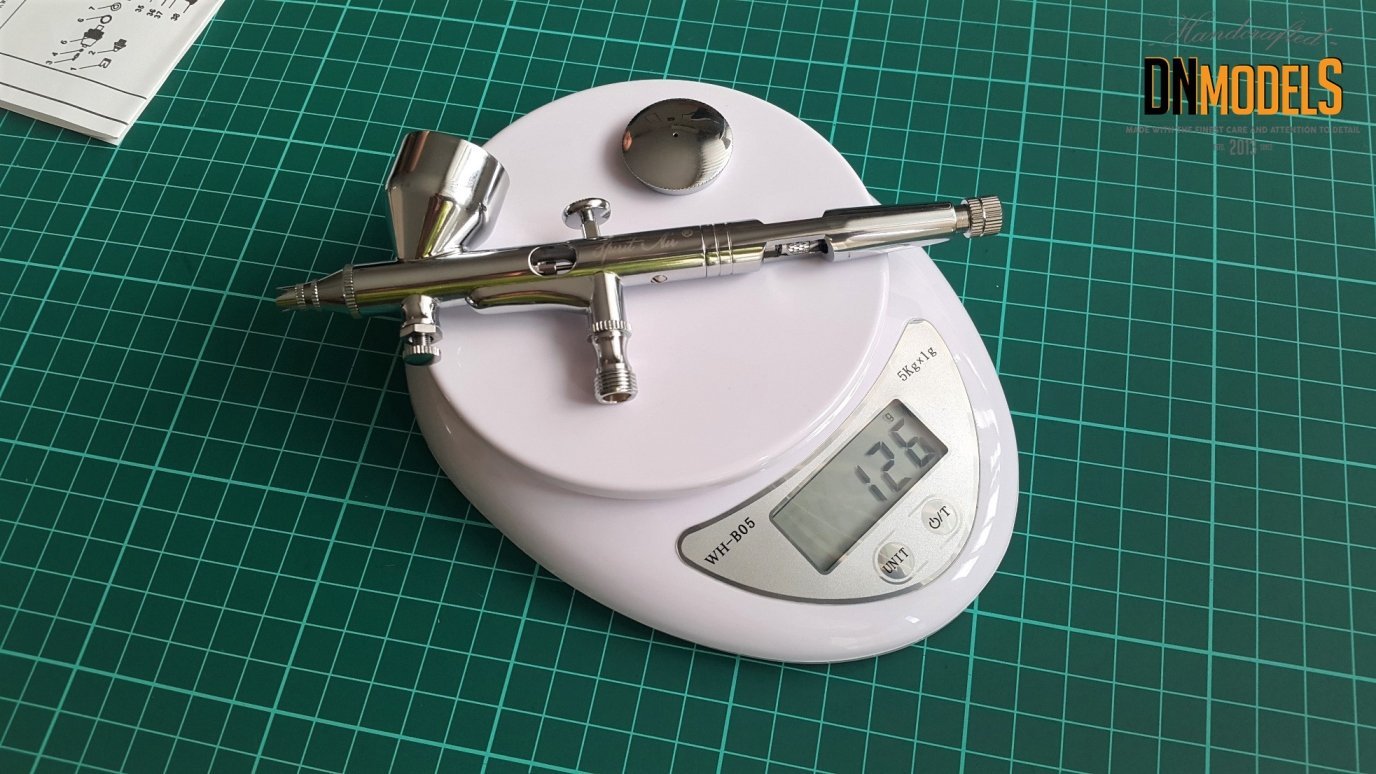 It works. It is far from perfect, but to counter that comes the price. A crown cap from Iwata costs as much as this whole airbrush. If you wanna use it for starting your hobby engagements – it is a good option. If you want to use it as a backup tool like in my case – it will work just fine too. 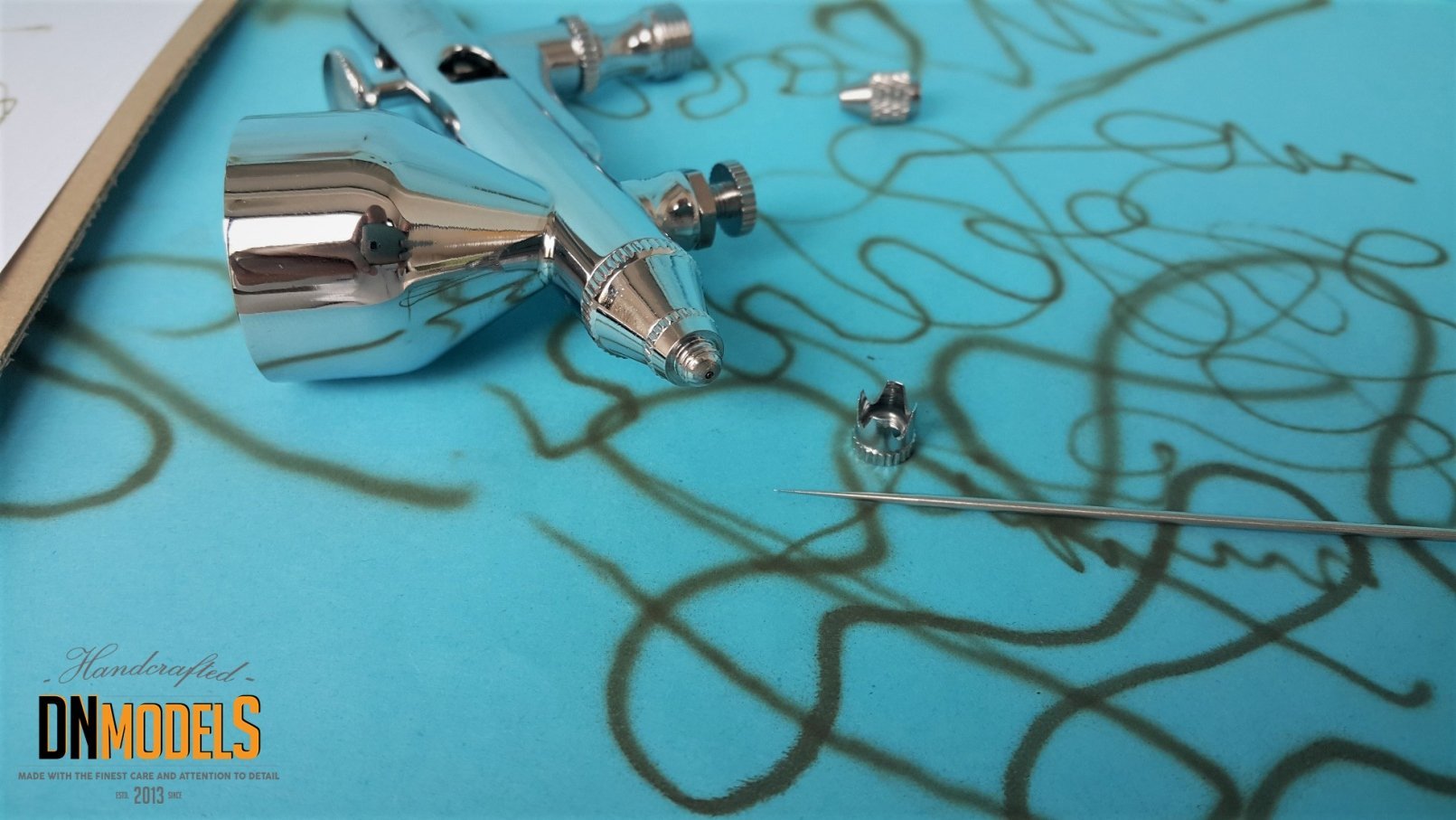 What I would avoid is, to use this as a main tool. It is not that good and in the end you will never get to experience what is to own and use a truly high-end airbrush like Custom Micron or H&S Infinity. Even if you start using that as a main gun, you should step up in a while. It can provide you with good foundation for basic airbrushing, but nothing further. If you tune it up – polish the needle, lube it, make it work more properly – you can extend its lifespan. But in the end, this is not a tool that have many years in it, nor represent a serious airbrushing future. It is just a Chinese knockoff, that costs as much as a BIG Mac menu and holds that amount of satisfaction and quality. 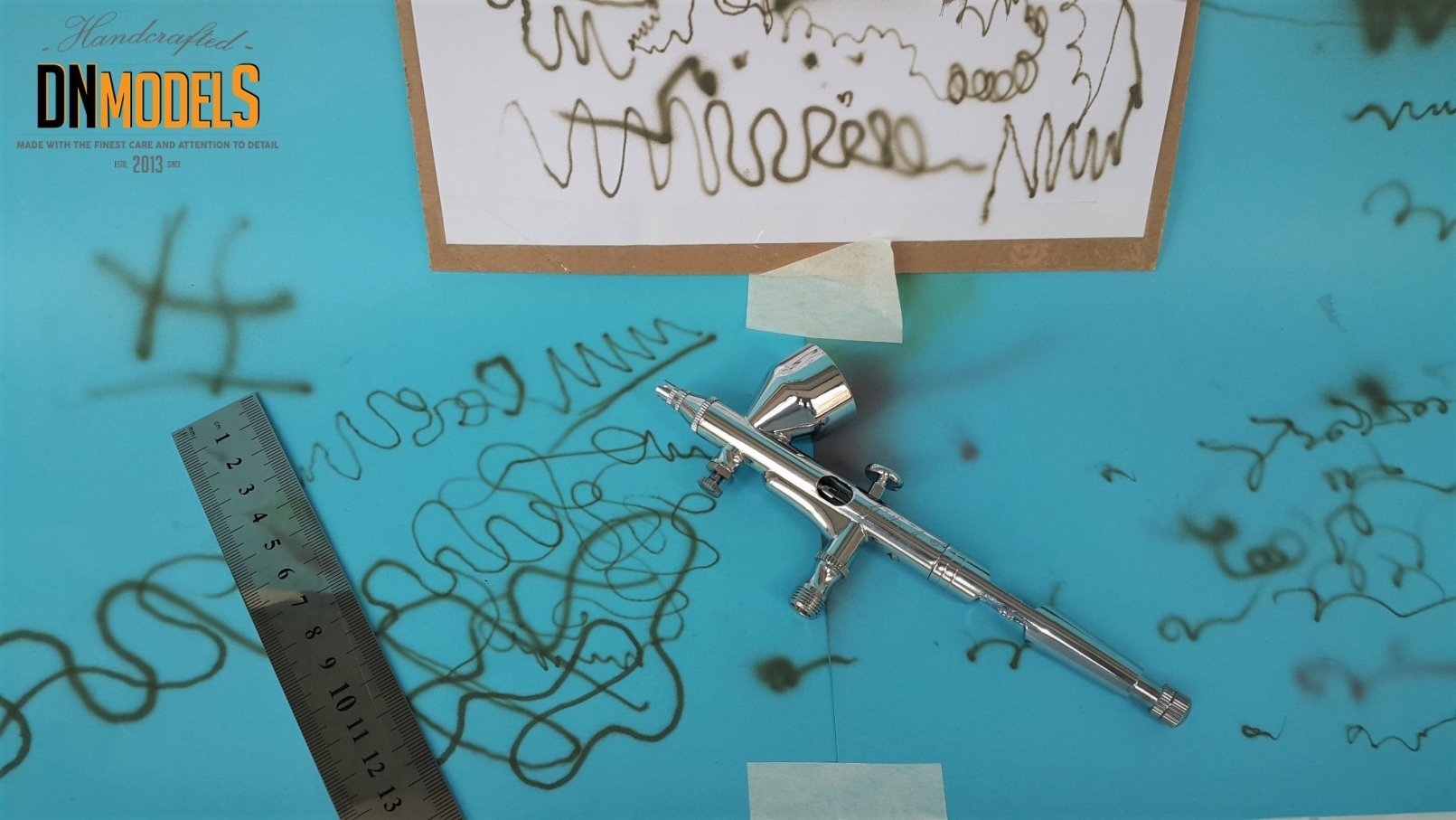