Antonov An-225 Mriya was the heaviest aircraft ever built. It was built as an upscaled and modified version of Antonov An-124 Ruslan, which by itself was inspired by C-5 Galaxy. Being bigger than Ruslan, An-225 was designed to carry Soviet Space Shuttle Buran on its back, but came up too late to survive commercially due to the Soviet Union collapse. Mriya /meaning Dream/ was built in only one sample, with its second left at 60% or so complete stage. After several attempts for the program to be restarted, still the second An-225 remains unfinished. Mriya, being bigger than An-124 was expected to have decent future as a cargo plane, superseding Ruslan eventually. It never happened. Mriya was destroyed during Russian Invasion in Ukraine in 2022, leaving aviation World in tears.

After this short presentation which most of you already are familiar with, we are continuing the series of articles about kits that are becoming very hot due to the unfortunate events of the Russian Invasion in Ukraine. As we already mentioned, T-72 and its variations in 35th scale are being sold out quickly, due to the huge interest surrounding the events. This time though, we are not talking about a military object, but a collateral damage of war. Scale model kits of the An-225 Mriya are not available in many variations. Actually, the decent ones with acceptable measures are Revell options and Zvezda repack of the latter. 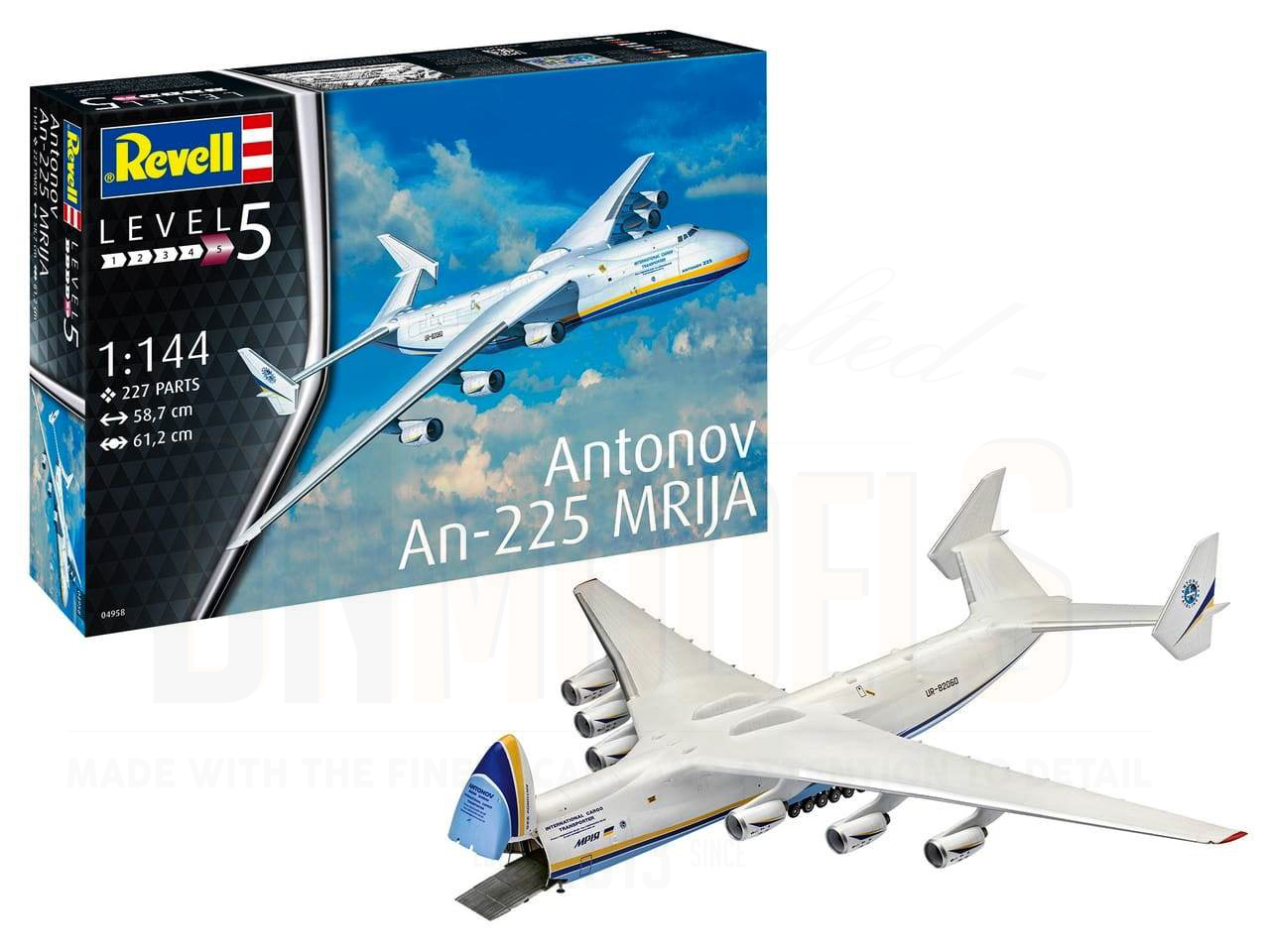 As we mentioned before, people all around the World are trying to avoid buying Russian stuff, since this in one way or another supports the Economy of the aggressor. Zvezda shouldn’t be the best option nowadays. Probably not even in the near future too. So Revell should be enough. However, as we mentioned in the Hot Kits Article, some kits are vanishing quickly and Antonov Mriya from Revell is among them.

There are two options of this kit. Revell measures their kits by the level of difficulty from 1 to 5. The two Antonov Mriyas are 3 and 5 respectively. The more complex one being the older release and of course – the harder one to find. The difference is the Cargo bay and the Undercarriage. With the Level 3 edition, you don’t get those. Other than that, in both cases you buy a decent tooling of the Mriya and at an affordable price.

In reality, there is no substitute for this kit, except maybe Modelsvit Limited Edition option in 72nd scale which is extremely big and extremely expensive. With that said, we haven’t seen any availability anywhere, so that will be an investment more than anything else. In the same time Revell/Zvezda are in 144th scale, which is more acceptable, considering real plane’s size. But still, they are hard to find nowadays. This article probably comes a bit late already for those who didn’t thought of the Mriya kits by now. 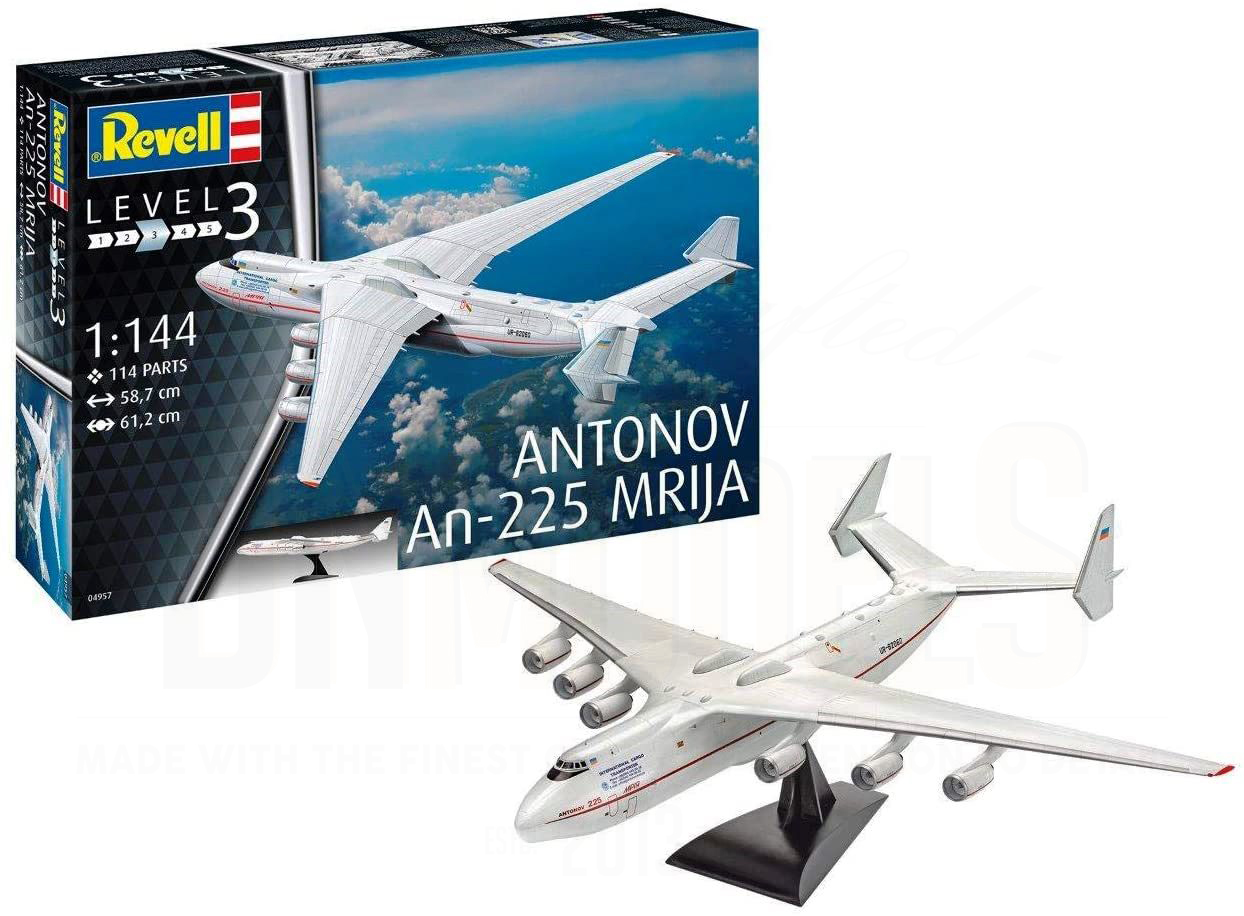 If you are being inspired by the latest events, our suggestion is this: get the Mriya first. Not the tanks or the jets. Leave those for after the dust is settled and the fires are gone. We sincerely hope it won’t take long. The symbol Mriya represents is important. And it should serve as inspiration for many. We think it is a good way to express your feelings and artistic touch through such kits. Wonderful plastic creations might appear soon on the modeling shows. Tanks and planes, we’ve already seen. There are many of them. Antonov Mriya sadly, was only one.

DN Models stands with Ukraine! Our best wishes to our friends at MiniArt and ICM, as well all the Ukrainians out there! Let future bring you peace!