The basics about this Encyclopedia

Mig Jimenez Encyclopedia of Armour Modeling techniques is a book meant to be used as a guide while modeling. The one that we are going to take a look at today is about Weathering. Probably the most important part of modeling process when one deals with armor.

The first question that one might ask is: “Why we need this when we already have Michael Rinaldi’s TankArt series?” Well, I did asked myself that question too, but I found the answer on the pages of this encyclopedia. In general, modeling here is presented from a different perspective. It is seen from a different angle and with wider view. 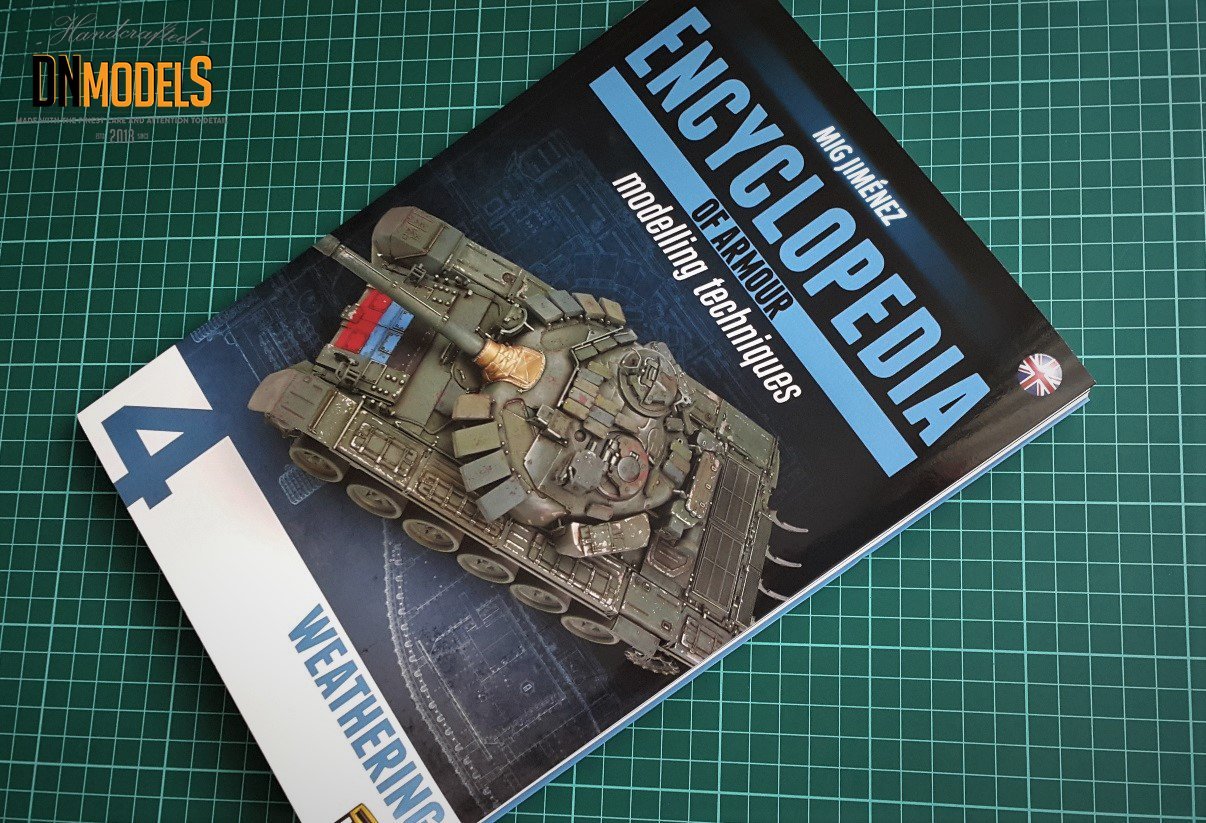 While Rinaldi’s book is almost perfect if you want to follow him and create a perfect model similar to his, here things are left to be interpreted by the reader. Don’t get me wrong, I do swear by Michael’s books. They are superb tool for modeling, a must for every armor model. But that does not eliminate the need for a book like this encyclopedia here. So my comparison will stop here, since I find both products to be slightly similar but looked closely – very different and completing one another.

As one might expect, everything is professionally arranged and very easy to understand. The pictures follow logical order and – very importantly – they do clear up the air around some techniques, which are more often than not misused.

That is vital here, because all the product explanation and suggestions that book contains would be useless without a proper guidance. Weathering is all about the proper amount, not just the technique used /and often abused/, and somehow this books clear this up. 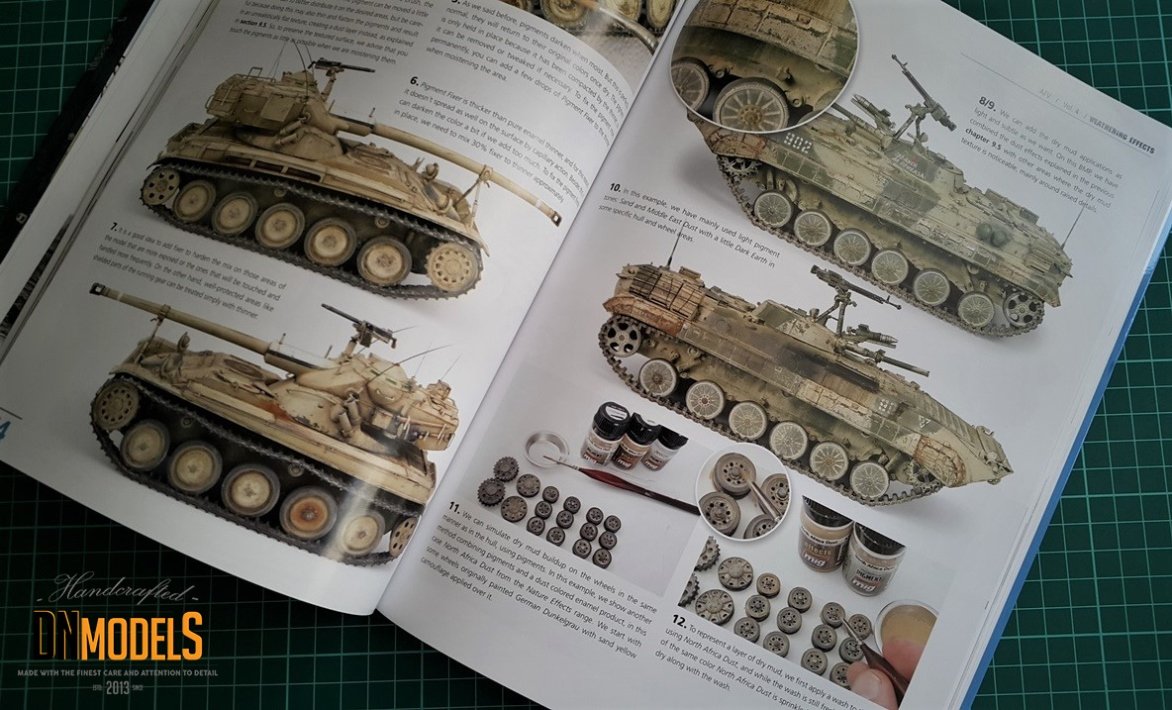 Another important thing about the arrangement of the book is the mix of different subjects displayed. While at first it was rather confusing and I was trying to get the idea which kit is that, or what aftermarket is used to spice it up, shortly after I let myself with the flow and stopped looking at the kits the way I did that with Rinaldi’s books. Excuse me for the repetitive comparison, but I believe it is inevitable.

Here the arrangement helped me get the idea behind the whole thing, while there the practical side of things was made explicitly clear. Again – both tools are completing one another, at least in my eyes. 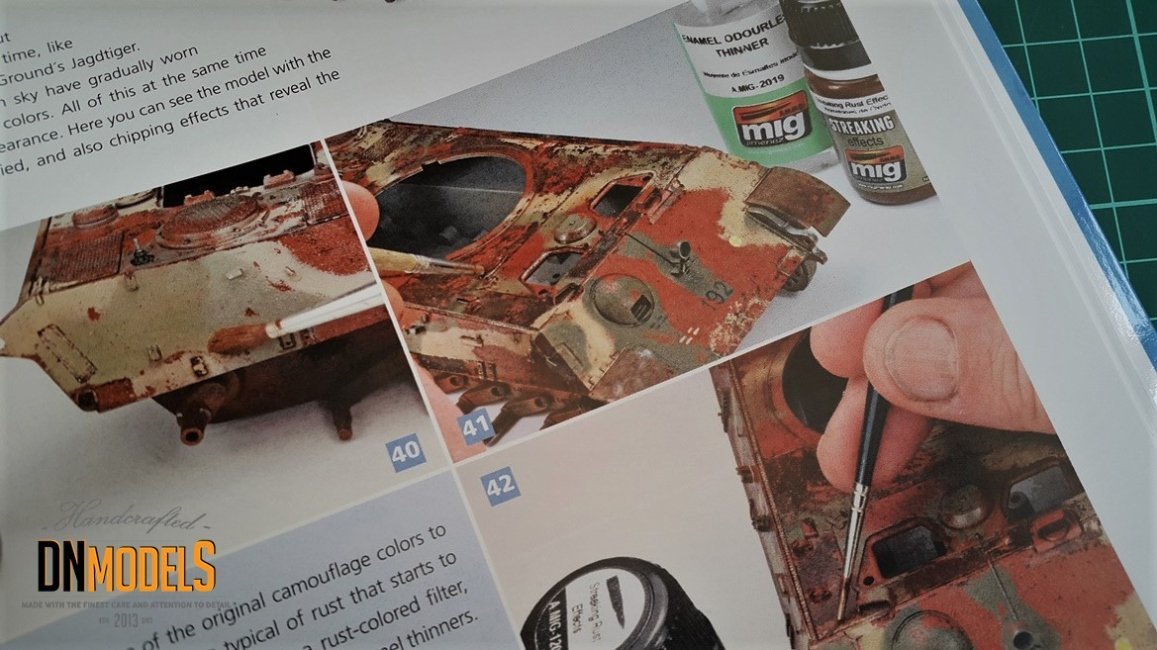 With all the above mentioned I want to focus a little bit on the models inside. As everyone else, I have that little kid inside of me that sees the model and somewhere deep inside I don’t care about the methods used or the model itself, but about the thing as a whole. Understandably, looking at those beautiful kits inside, various in appearance, shape, size and era, I was like a hungry kid in a candy shop. 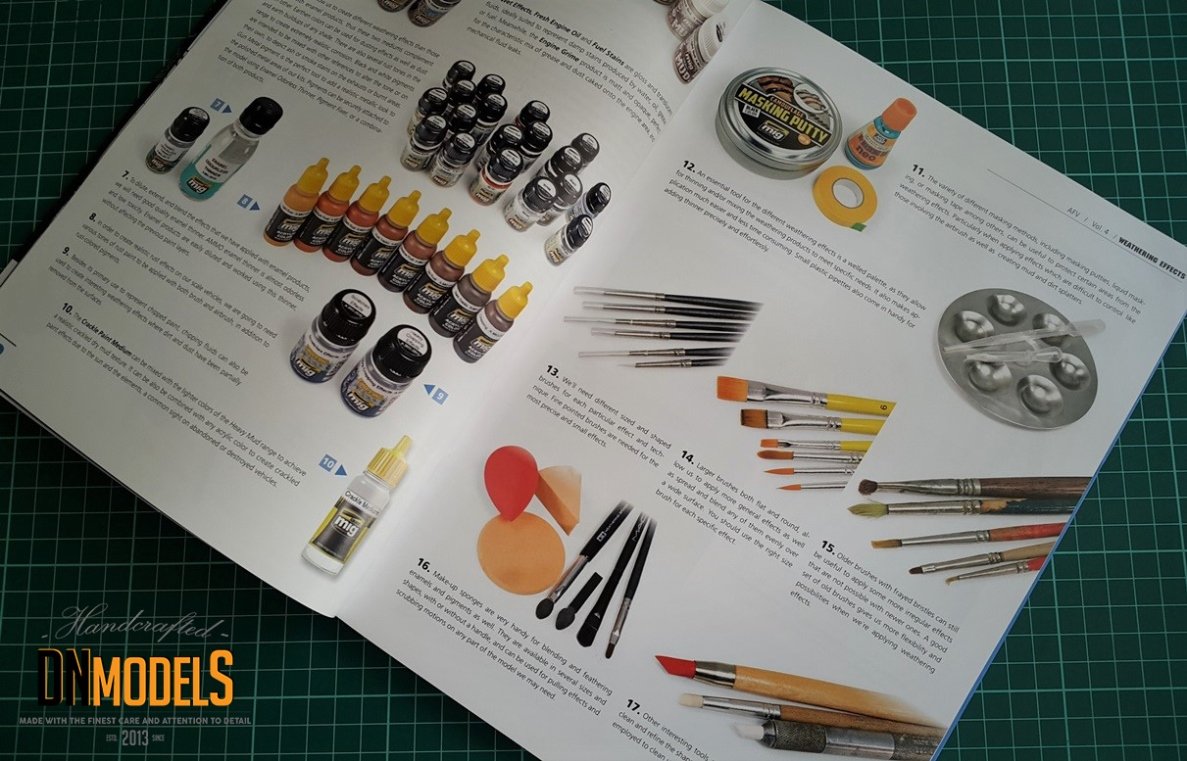 There is a mix of old and new, battered and not-so-much vehicles, approached in a different manner and completed in different styles. Even though not widely looked at as kits or as building process /this is a book for weathering after all/, the abundance of themes implemented inside is superb.

That is something that is missing in every other modeling book that I’ve seen so far. Simultaneously, this is the thing that caught my attention at first. And brought a very positive response when I started going through the encyclopedia. 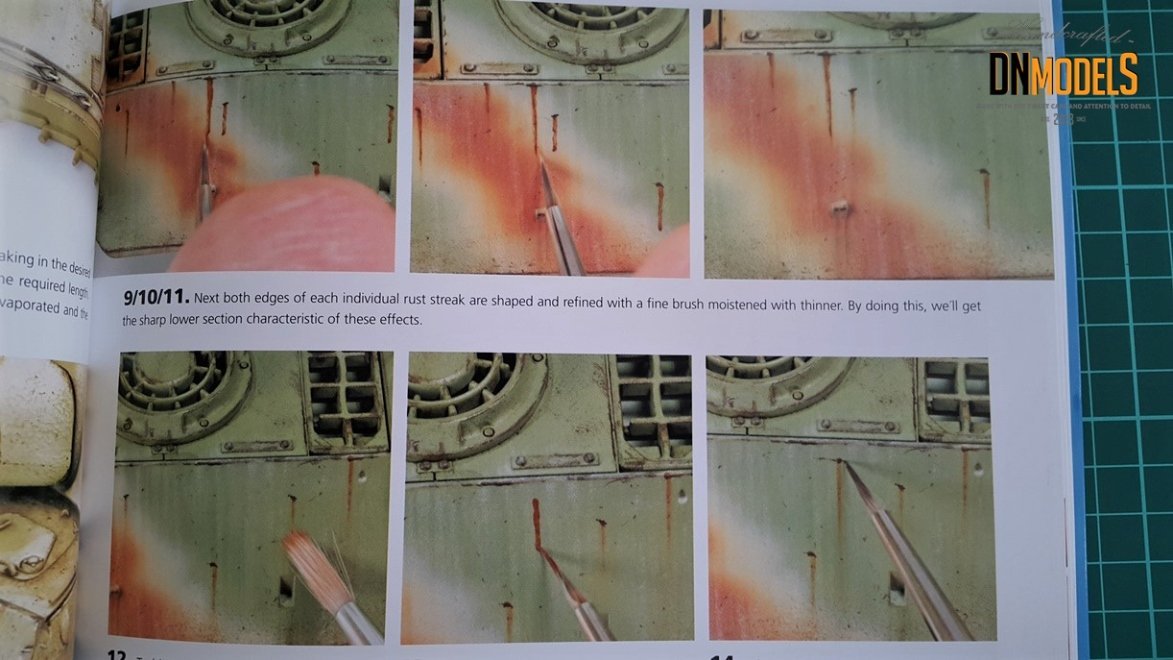 Another thing that many might discuss about the book are the products used. I already saw that in a short but fierce argument between two of my modeling buddies, who were arguing that this can be seen as a product commercial tool on the one side and a perfect combination provided by one single company from the other.

Well, maybe both are partially right. I tried to stay aside from this argument. Anyhow, the book is truly featuring MIG products. And this is very good. Why? Well, there is only few companies that provide you with a range wide enough to cover your whole building process or your whole weathering process and for the latter one, MIG is definitely a leader. When I first started with armor modeling, 20 years after I started modeling in general, Mig Jimenez ideas helped me a lot. Now I know that if I want to get everything for a certain weathering in one place, AMMO is for sure one of them and probably the best one too. The most important thing here is the speeding up of the process with the help of all those tools. Plus the knowledge of that encyclopedia of course. 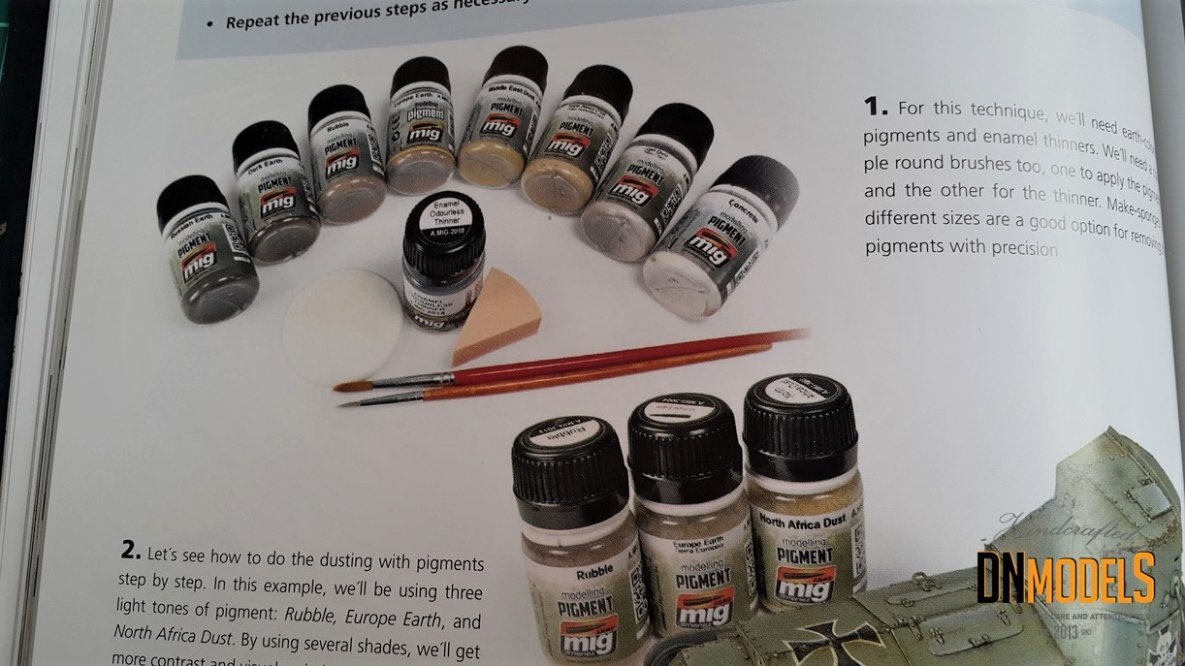 On the other hand, I do understand putting everything into one place and using the book as a marketing tool. At DN Models, we do try to use as many platforms as possible to promote our stuff. That is the only way to get to people. So from my end, Miguel is excused in 120% and I don’t care if this book is a tool for marketing or not. It simply works and that is the main idea. Working for him too is not a bad thing. Just the contrary. It is the perfect way of doing business. It is not like buying soda and fill yourself with sugar, while ruining your health and somebody else making money off of it. It is just showing off what the company produces and how you can use their range to complete a model from start to finish. AMMO guys are happy and we are happy. When both sides are happy, the business is perfect.

This book is one out of five. Probably all combined, will give you a mix of information for many models and techniques, some of which you will be interested in, others not so much. But whatever the case is, looking at these books as a whole piece, will be most likely the best way to comprehend things.

This is a lot of information, no doubt about that. Weathering which is part 4 of the series, is 147 pages and the format is abundant with knowledge. There is also Construction, Interior and Base Colors, Camouflages and Final Touches. Pretty much the whole process of building a model broken down into sections. And above that, as far as I know there is an Aircraft series of this type available.

My book is in English, but I believe that there are options in other languages. AMMO left their mark here, providing wider range of people with good info-basis, because language usually is the most challenging aspect for many out there. They don’t feature Google Transalte kinda thing in every language possible, but it makes a nice impression.

The models chosen to be featured are picked wisely too. I believe that Miguel knows his way around armor and I am more than sure that he gets a lot of requests to feature people’s stuff inside of his books. Many do it for fame, others for money. Doesn’t matter. So choosing the best was probably very hard and long process.

The last and most important thing I need to mention is Elizabeth. That is Miguel’s wife and the most famous lady in modeling. There is a page dedicated to her and the fact that she was diagnosed with a tumor not long ago. She is young, talented and beautiful lady, which obviously an important part of Miguel’s life and his business. What happened to Miguel and Elizabeth is probably the scariest thing that people go through in their life and at that age is devastating. With that said, I have to add that they fight it with obviously all they have and even with that struggle, they manage to stay afloat and produce stuff like this book. For me, the value of the book doubles knowing that. Even more. 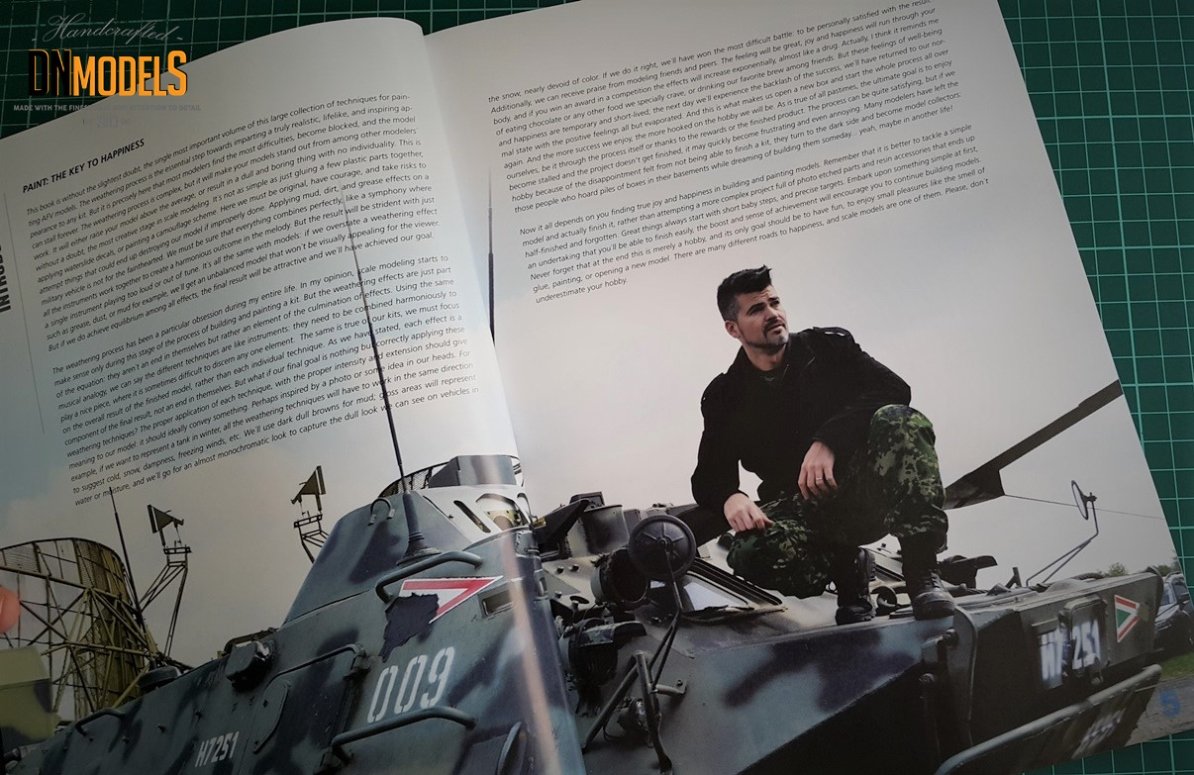 I think that all of the written above is drawing a simple conclusion, but still – a few words:

This is  tool, and I believe – a worthy one. I trust this can be expanded with further issues for more armor, aircraft, ships and so on. Even though it cannot possibly combine all the techniques used in this art into a book, this is a very good attempt of completing it. 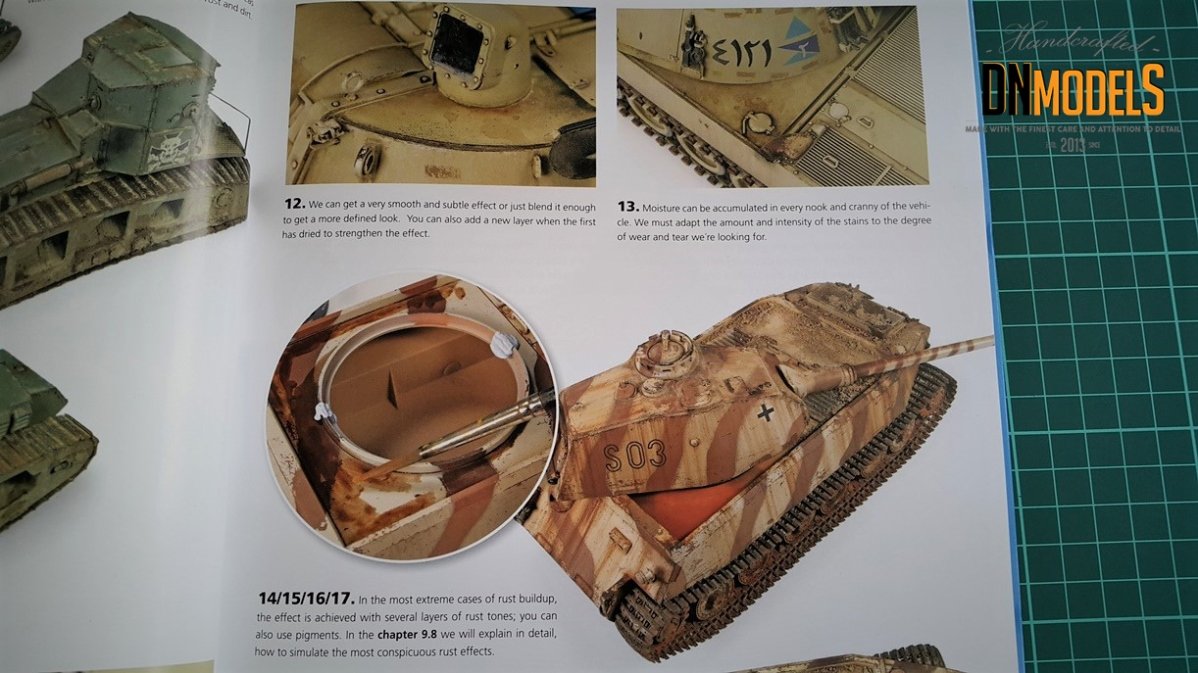 The books is with clear explanations, which can be practiced successfully from any modeler, and even if you do not choose the AMMO products for your process, it still holds the vital information that one needs to complete a beautiful model.

It is large, comfortable for use and contains stuff that you can easily get from AMMO, which is very useful and eases up things a little bit. Modeling is a challenging and demanding hobby and if you want to experience its joy to the fullest, sometimes you need an advice or a helping hand. This encyclopedia is exactly that.