AMK Upgrade Set for Foxhound #88003 was expected from an aftermarket company, for example Eduard, Voyager or some decal maker, but having one from AMK themselves was a surprise. This method of upgrading their own kits is something that Zoukei-Mura did and recently Tamiya does. It is nice to have that, since you have some sort of affirmation that the quality of the kit will be equal to the quality of the set with the upgrades, which sometimes is not the case. Freshest example that I have is the Wessex folding tail upgrade set. The resin part there was far behind the quality of the Italeri kit /surprisingly, right?!?/ and it made the resin part useless. 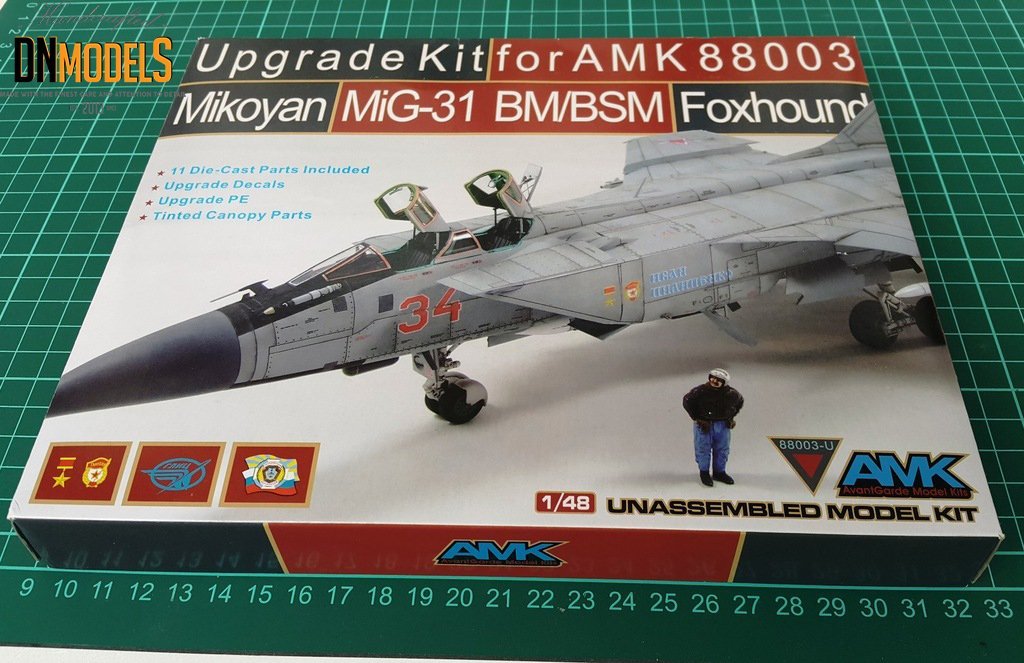 The other example for the exact opposite is the upgrade set for Tamiya’s Panther, where everything was neat and was perfectly suitable for the quality of the tank itself. So with that in mind, you probably can guess what you will read in the following lines, because we are talking Avantgarde Model Kits here – one of the best companies out there with one of the Top 5 kits currently on the market. 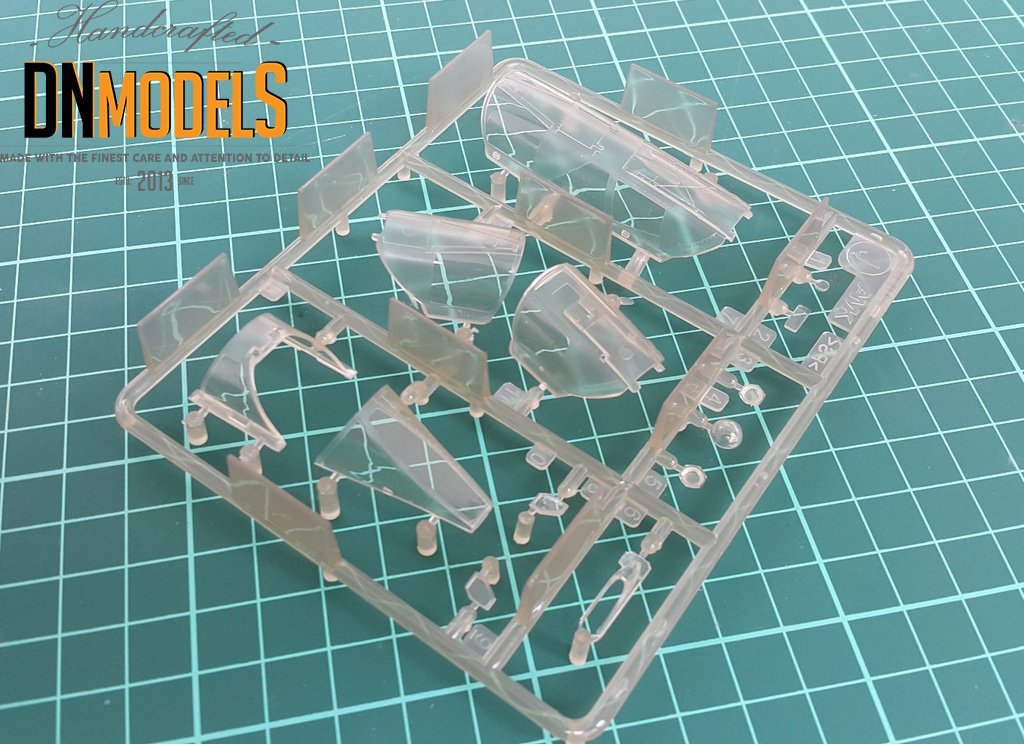 Let’s start with the tinted canopy. The real look of the MiG-31 is somewhat different from what a regular scale model kit can offer. The transparent parts of the real thing are yellow-ish, probably due to one of the following reasons:

either they are gold-tinted like we’ve seen on some F-16s and all F-22s, or

the long exposure to the Northern days and the merciless sun at 60 000 feet. Plus the age of course.

I am not an expert on MiG-31 but I can boldly guess that it is the second one. So what we get in the upgrade set is Tinted Canopy parts and the seals that goes along the edges of Soviet/Russian jets. That is the pink thin line on the edge where the metal meets the clear detail. 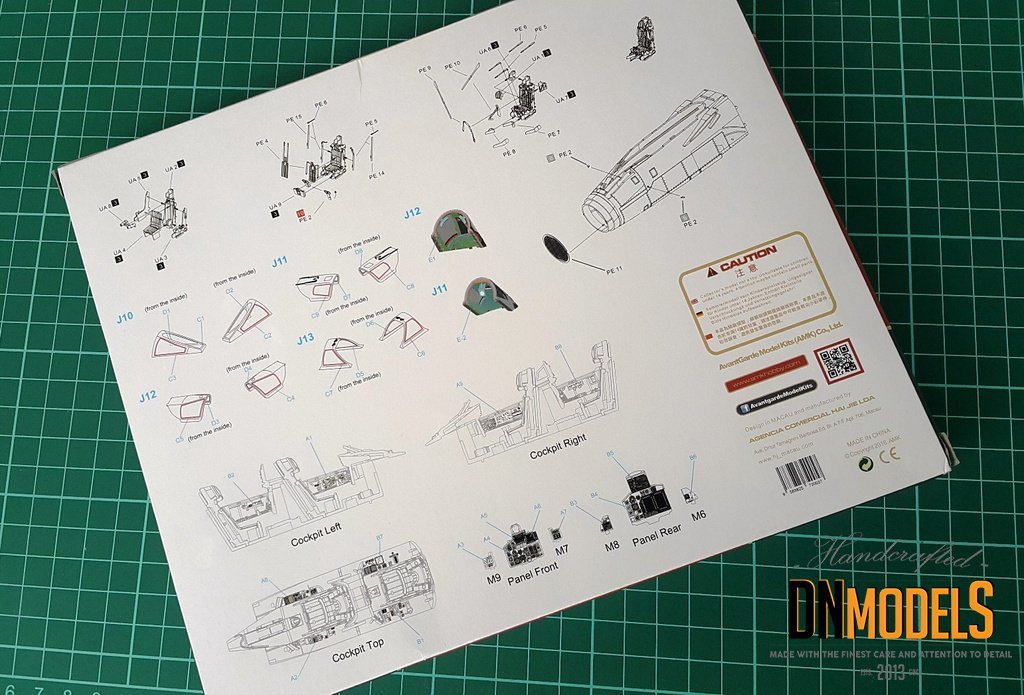 AMK added this to the set, making two less troubles for the modeler. The pink-ish rubber material was always a trouble-maker. Especially for MiG-21 lovers who happen to own Eduard kits. You know what I am talking about!

The transparent plastic, although with different color shows no signs of lower material quality. Just the contrary. It looks amazingly close to the real thing. Only nice things to be said about it.

The metal struts are the other add on. We have enormous plane here, so plastic struts is always a bad idea. We have eleven die-cast parts in total. They are carefully enclosed within a plastic box, with neat cover, looking like a cool make-up set or something of the kind. Absolutely fantastic once you open it, you can see all the metal parts of the gear inside. they are casted with precision and they feature very tiny strut details actually. 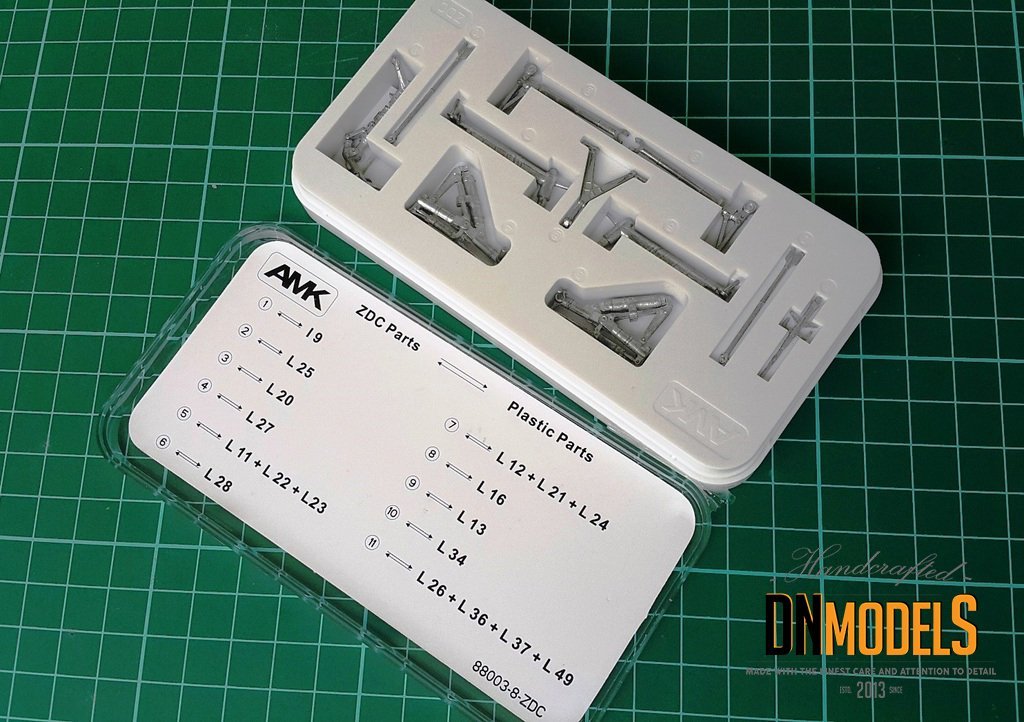 The thing I should add here, is that Eduard are offering resin wheels already, so you might want to consider that to even extend the level of superdetailing further. Alongside with this AMK Upgrade set it will be perfect combo for accuracy maniacs! Good times for Foxhound lovers!

There is a PE set too. AMK Upgrade set features a sheet of thin material, and the first thing you notice when you look at it is the radar antenna. Then we have ejection seats parts, most notable of all, ejection handles which sit between the pilot’s legs.

The radar antenna is part of the Zaslon-M radar system which is used in MiG-31BM. Now, you can display it if you remove the nose cone and it will be even more attractive for some modelers compared to the standard plane appearance. I do prefer the streamline of the plane to be kept, but the most fashionable thing at any model show is – unfortunately – plane in a maintenance mode, with all the panels open and visible. The good thing with this particular kit is that the Zaslon radar antenna is fixed and you can hopefully remove and put back the nose so you can show that is there, but keep the shape of the Foxhound for good. 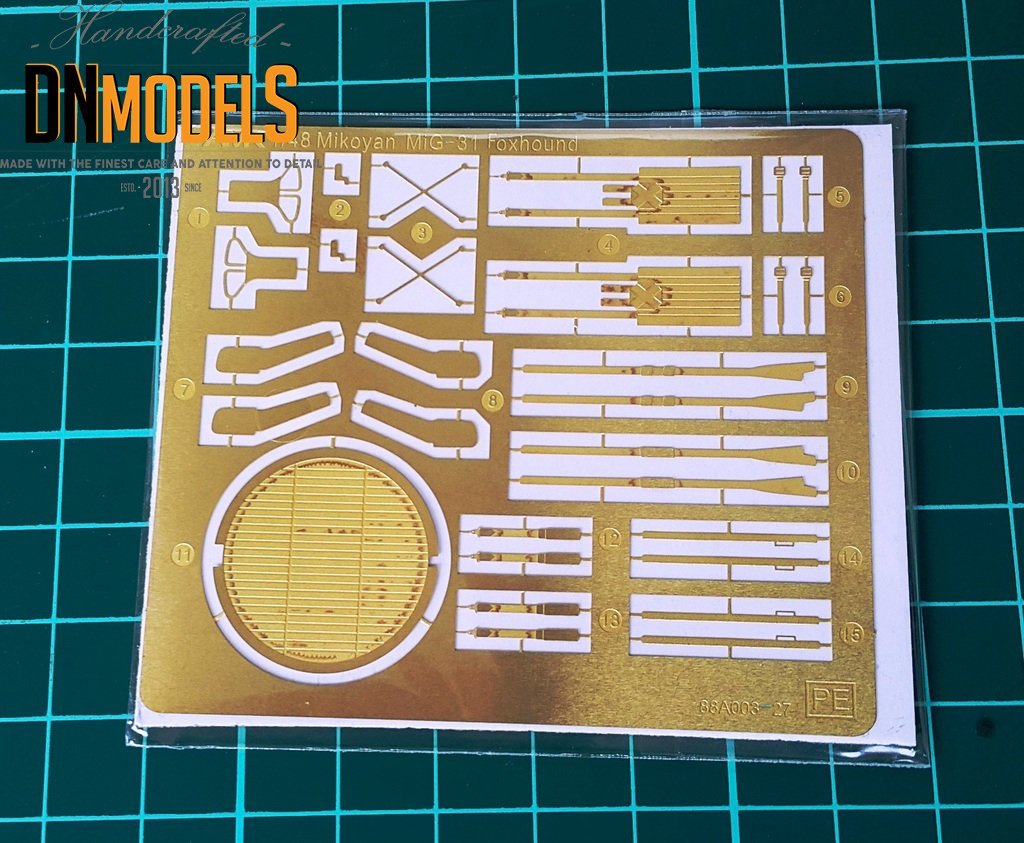 Decal sheet included in the AMK Upgrade set features extended set, compared to the one you can find inside of MiG-31 88003 box. Probably at some point AMK decided to upgrade only the decal sheet but it was too late to put it in the box. What we have in the standard packing is with fewer decals but it seems to me to be of the same quality. Here we don’t have the technical markings but instead the insignia upgrade. 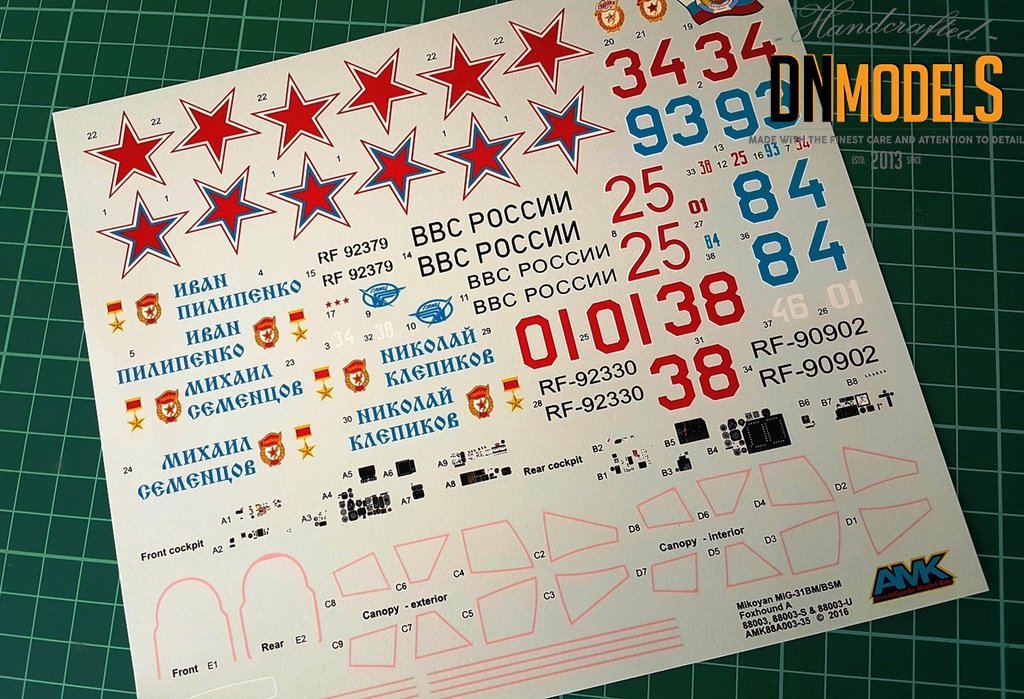 All this is packed in a nice packing resembling candy box rather than a scale model upgrade set. Everything is done in MiG-31 AMK colors, deep red and dark grey, with blue “AMK” on the sides. And this is truly a chocolate box for the modeler! With what you get here, you can superdetail your MiG-31BM/BMS set. AMK 88003 is the first big jet from AMK and they quickly realized that they might improve it. Luckily, the second version of MiG-31 that the Macau based company released – AMK 88008: MiG-31B/BS features the tinted canopy and the PE set inside. This is a step forward and I must say – a quick one! We might only hope for what will comes next with their F-14D Tomcat and if they keep their promise – their three MiG-25 versions during 2017.