A-26B Invader is the first of the A-26/B-26 line that Hobby Boss releases. Invader is a legendary plane, that’s why there is no doubt that other variants will follow. Let’s start with that, that Invader often is quoted as the plane that fought in the three major US wars: WWII, Korea and Vietnam. Many other conflicts as well. It takes something to be that sturdy and to survive through times when aviation technology was leaping every two years or so. Even more with two spinners attached.

Although later variants were modified and internally had little to do with the WWII examples, it was still the good ol’ A-26 in general. The plane was slightly ahead of its time with its sleek and sexy looks, laminar wing and speed achievements. It was a brain child of the genius Edward Heinemann, the same guy who designed Dauntless, A-1 Skyraider, A-4 Skyhawk and worked extensively on F-16.

The Invader, although somewhat lost in between the news about new and extremely fast jets for their time, atomic weapons and constant conflicts popping up here and there all the time, was still a very bright star in the aviation history if you take the time to explore it. In that terms, this kit can be considered overdue.

A-26B Invader is the typical Hobby Boss kit. It is packed the same way as Trumpeter and Hobby Boss always did it: in separate plastic bags, with couple sectors made from cardboard dividers. That’s in the box that is rather small for 32nd scale twin prop, but in the same time with enough space left to close the lid once you open and eventually re-arrange the order of the sprues.

Everything else is just like it always was, which is not a “top-notch“ appearance, but that is justified by the reasonable price tag and the fact that in the end, the box means nothing. The only thing that matters are the contents. And Hobby Boss are perfectly aware. 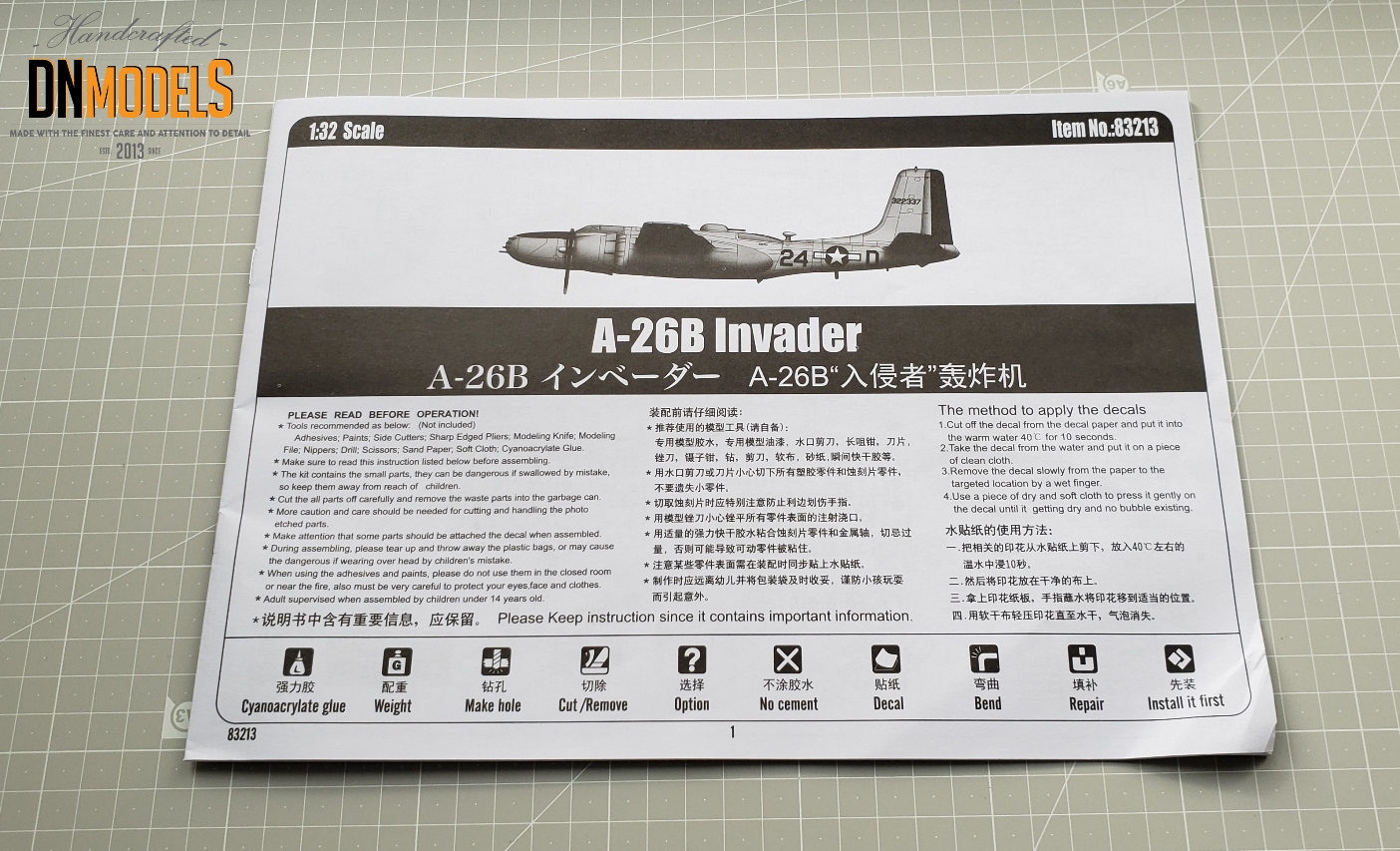 Those are located on the bottom beneath everything else. Unfortunately, the style remains unchanged after two decades of experience in scale model producing. It is not bad per se, but the change was requested million times on different web platforms from plenty of modelers. We are living in an era of highly competitive market of scale models, where companies with innovations and superb quality products bloom. Keeping the sheet the same like it was in 2001 is not a good option. After all, this is your guide for getting through the increasingly complex building processes.
On the other hand, the latter hasn’t changed much for Trumpeter/Hobby Boss, so again, this is justified. HB kept this build simple and straight-forward, so if you are not overly pretentious, you will probably be able to accept what comes OOTB in terms of instructions.

Unfortunately, same goes for the color schemes, which provide three options, two US and one French, but without any explanation what so ever. Eventually, the modeler should find out what is being built by personal research. 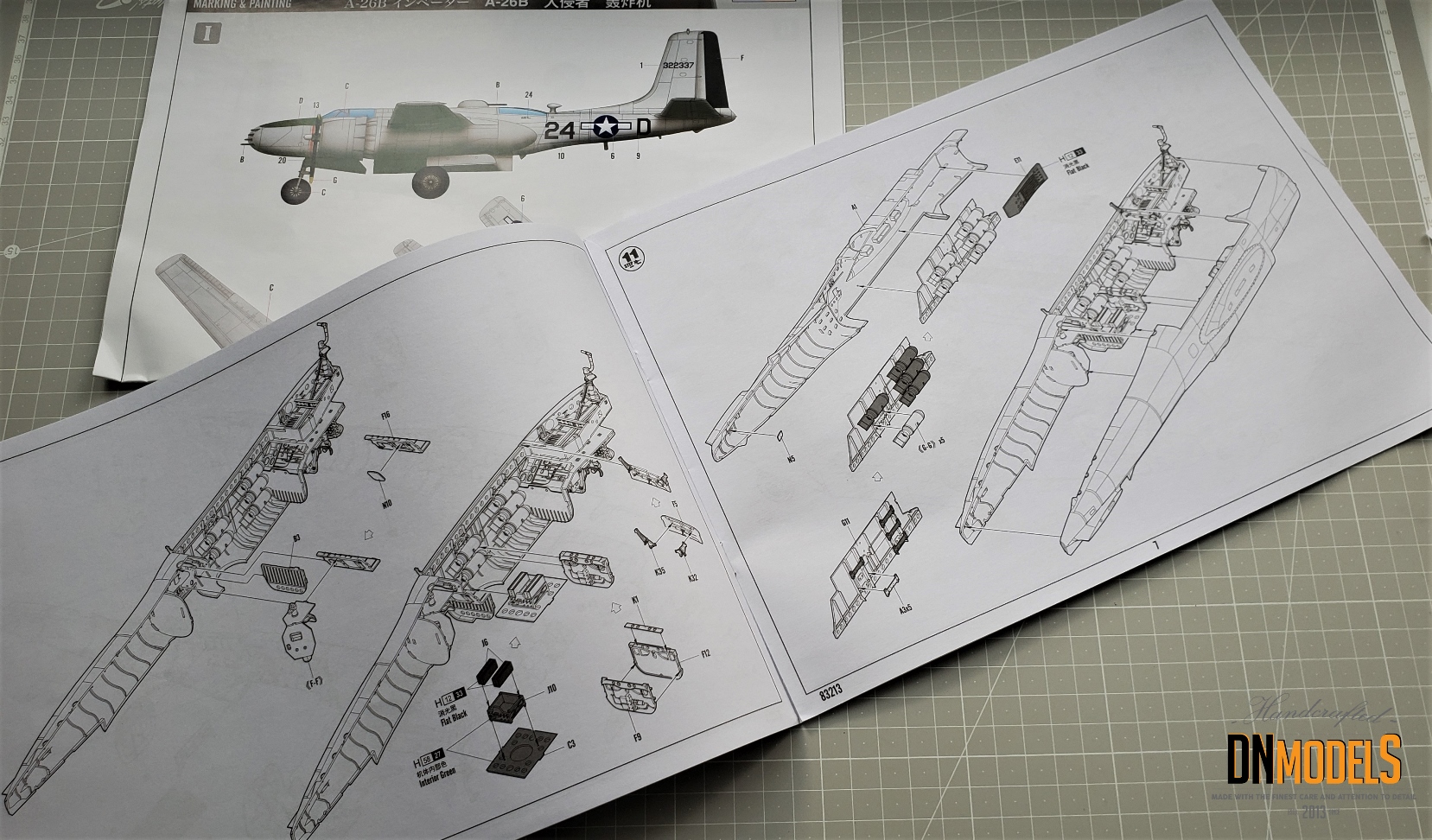 The quality of the Hobby Boss plastic is good. This A-26B Invader is no exception. It is what we know and love from the Chinese model maker. It sands well, it cuts well, it can sustain decent amount of abuse. What more can a modeler want?

There is a room for extra detailing, especially on a rivet level, but even as it is, the Invader comes with a decent texture. The kit features interior as well and the same goes for that. Again, thanx to the plastic that we are used to get from Trumpeter/Hobby Boss, one can easily conclude that cutaways will be very easily doable and probably almost mandatory with this kit. 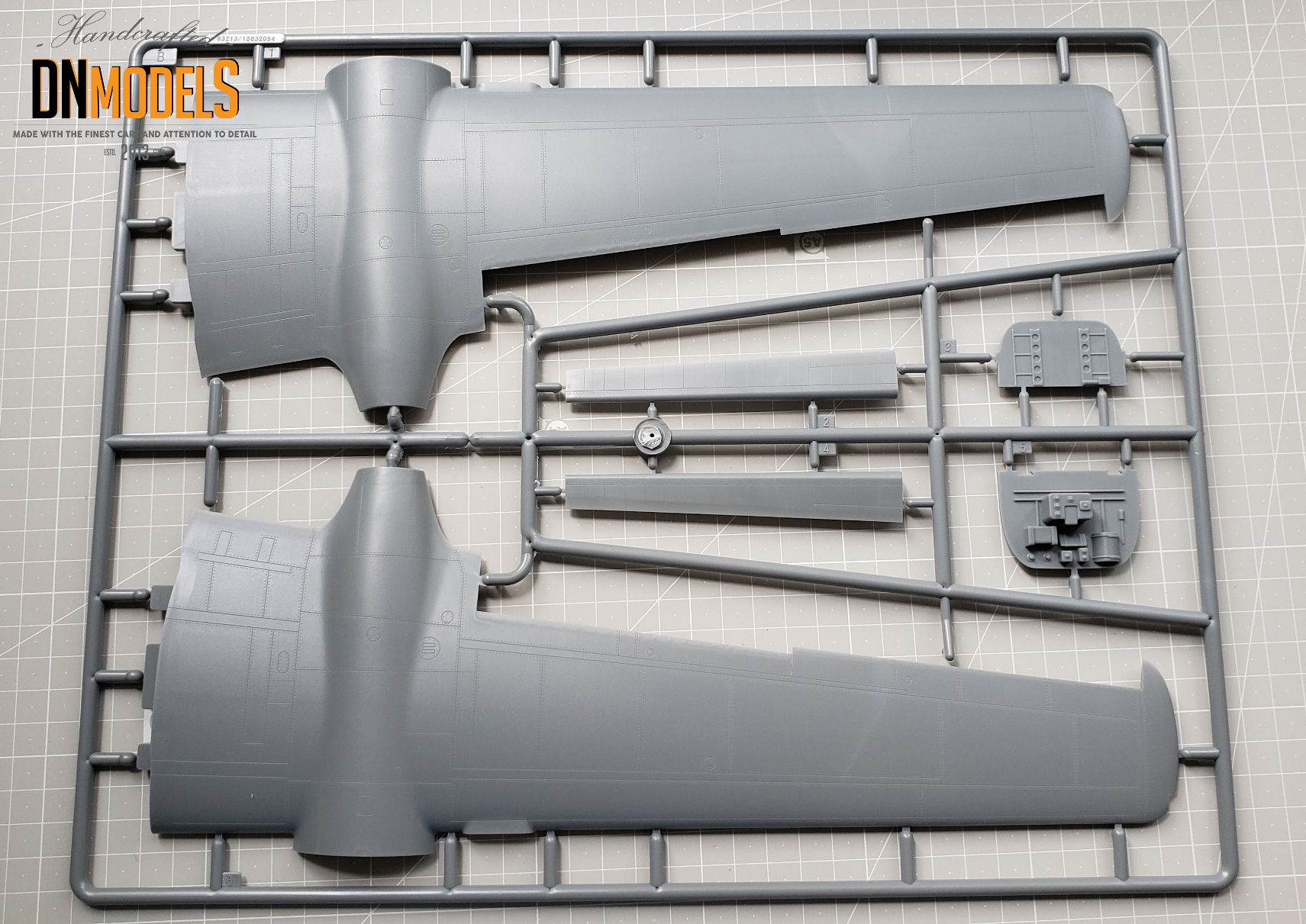 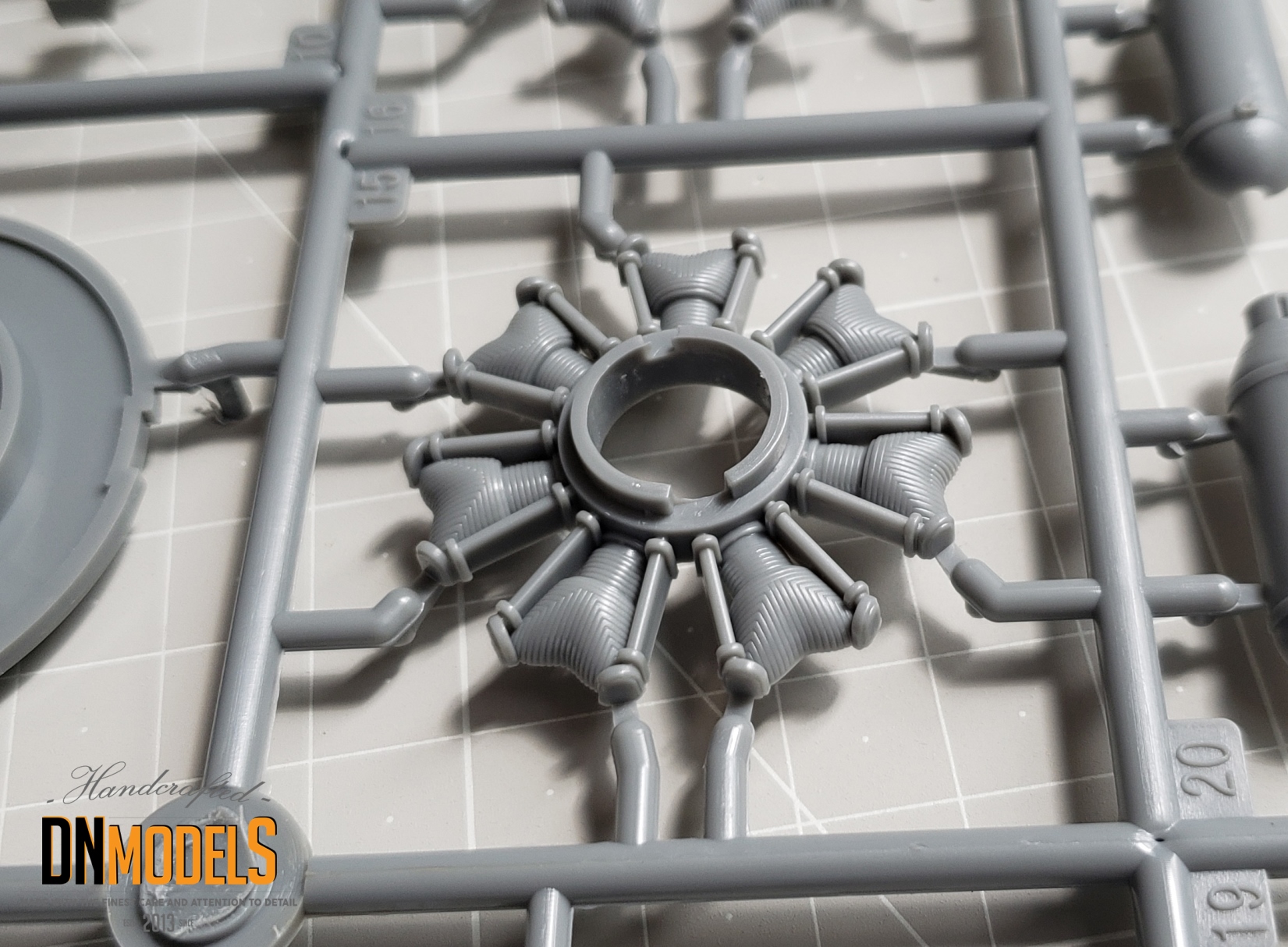 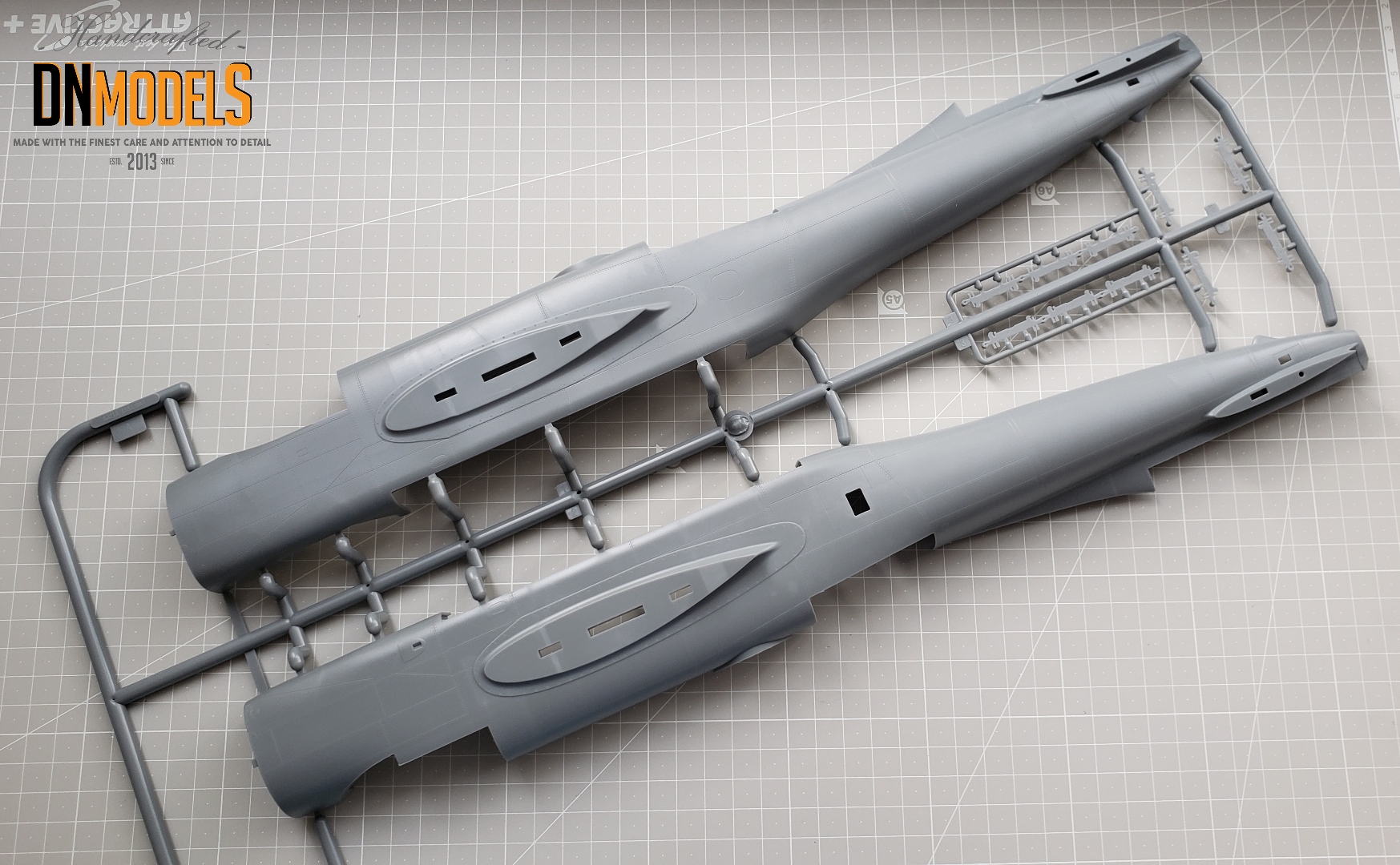 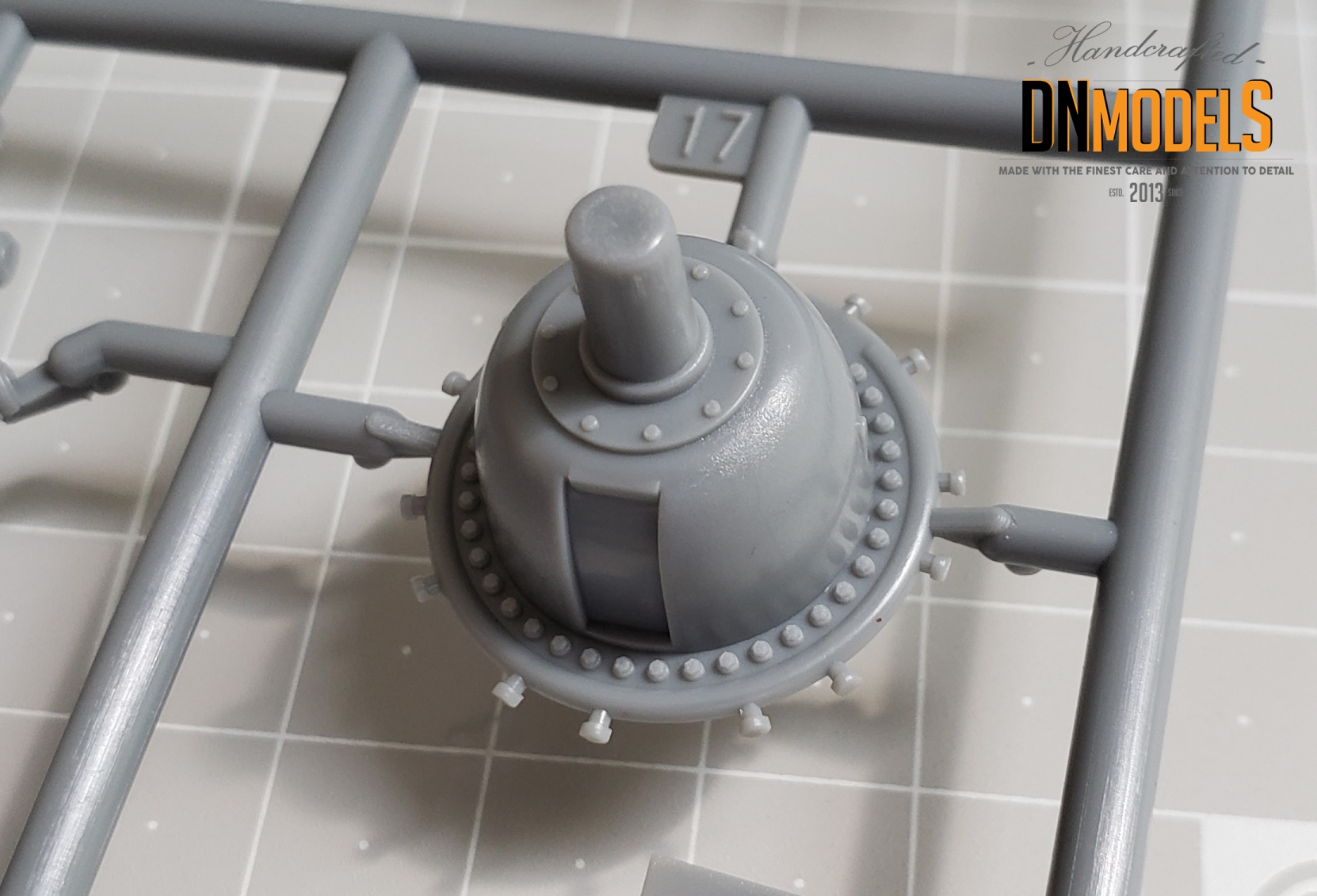 The sprues aren’t that many, but the focus isn’t on the part number as with armor kits. Just the contrary. That was the case with the Liberator recently released by the same company. So logically, here things are pretty much the same.

Speaking of which, Liberator was criticized widely for accuracy issues. There is a big BUT and the fact that there aren’t many other options on the market, so whoever wants to build – builds. The rest complain and search for discrepancies. Same goes for the Invader. And it is pretty sure that the accuracy will have flaws, possibly some major ones. But do we have an alternative? 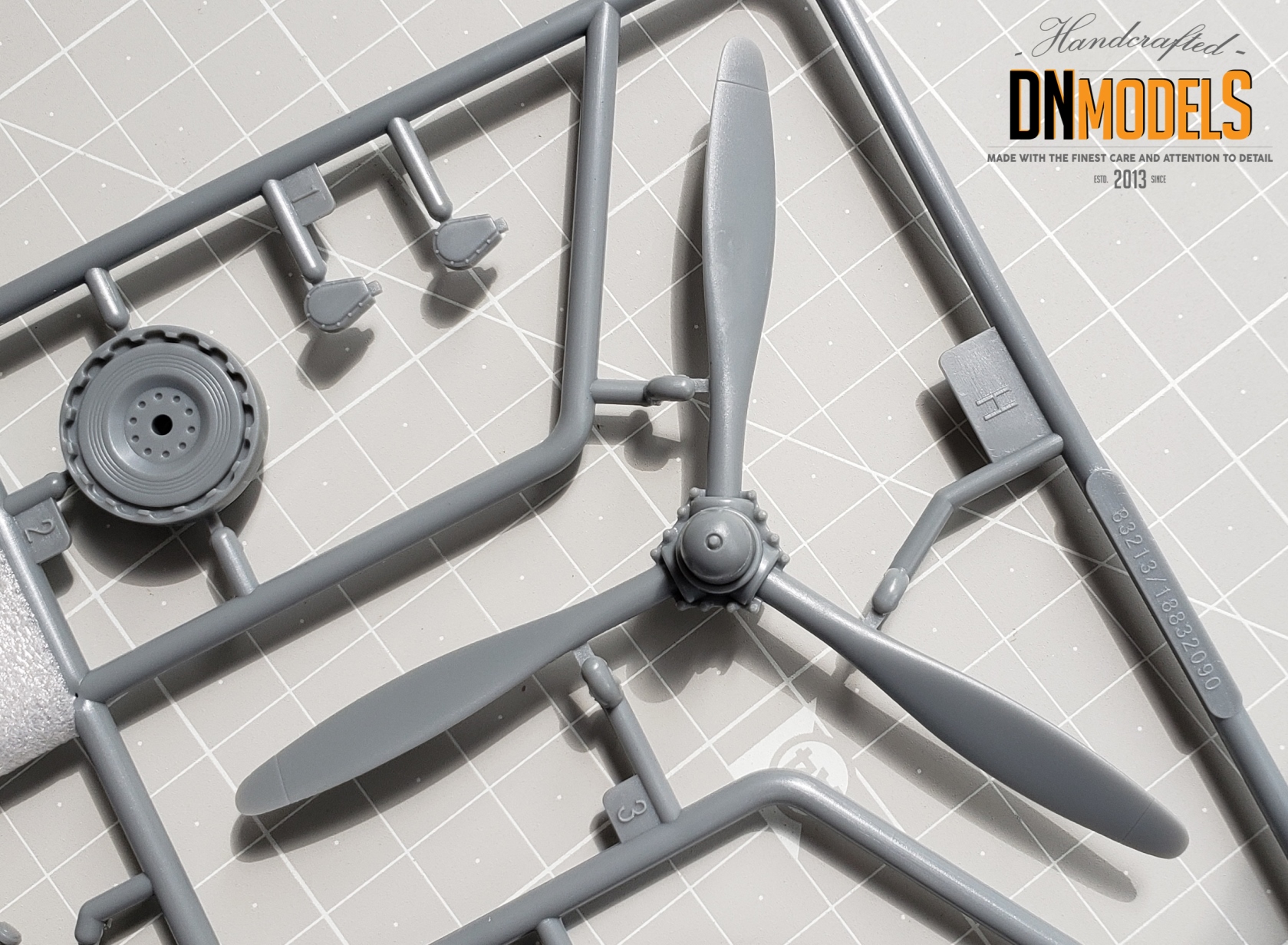 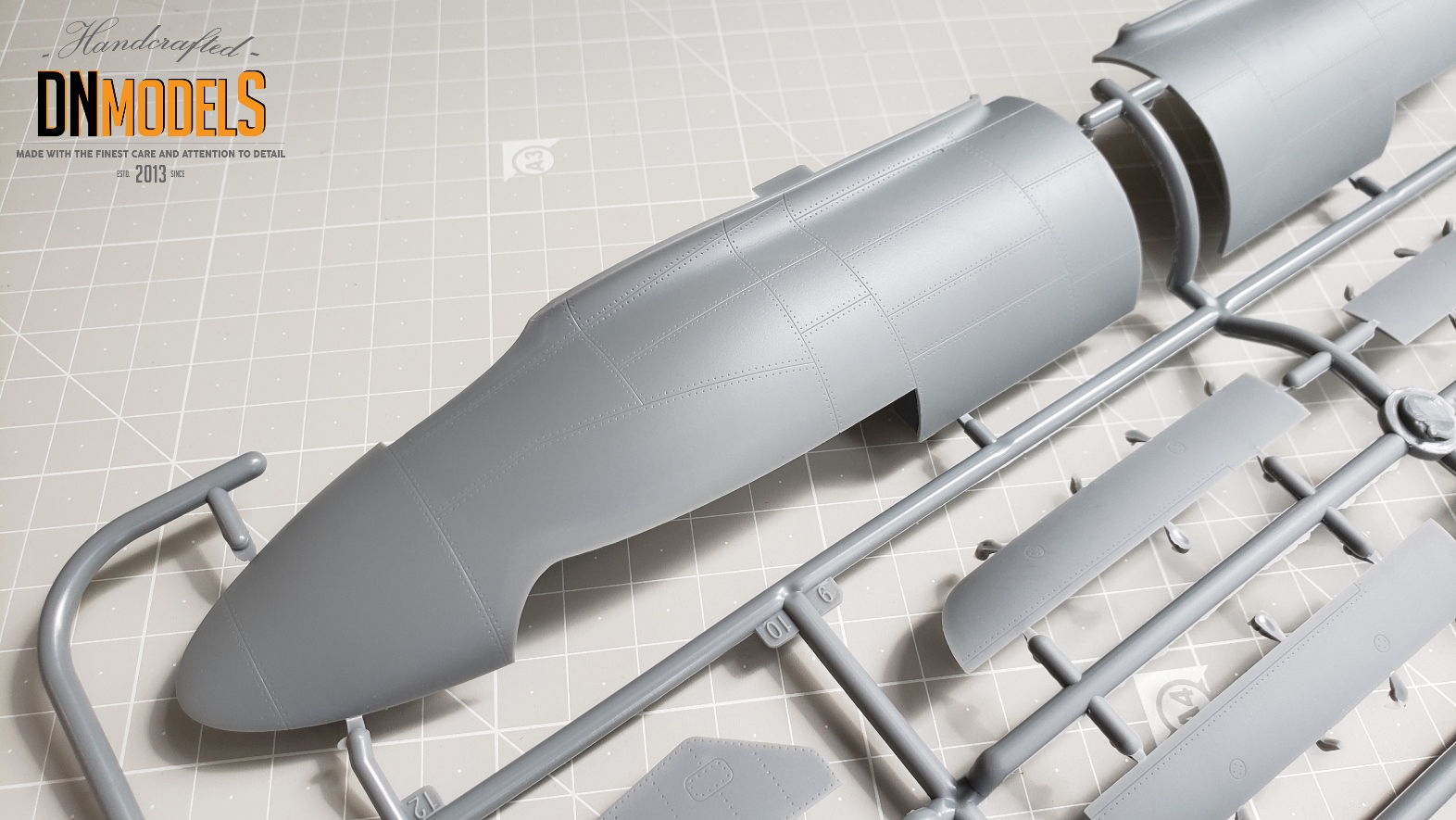 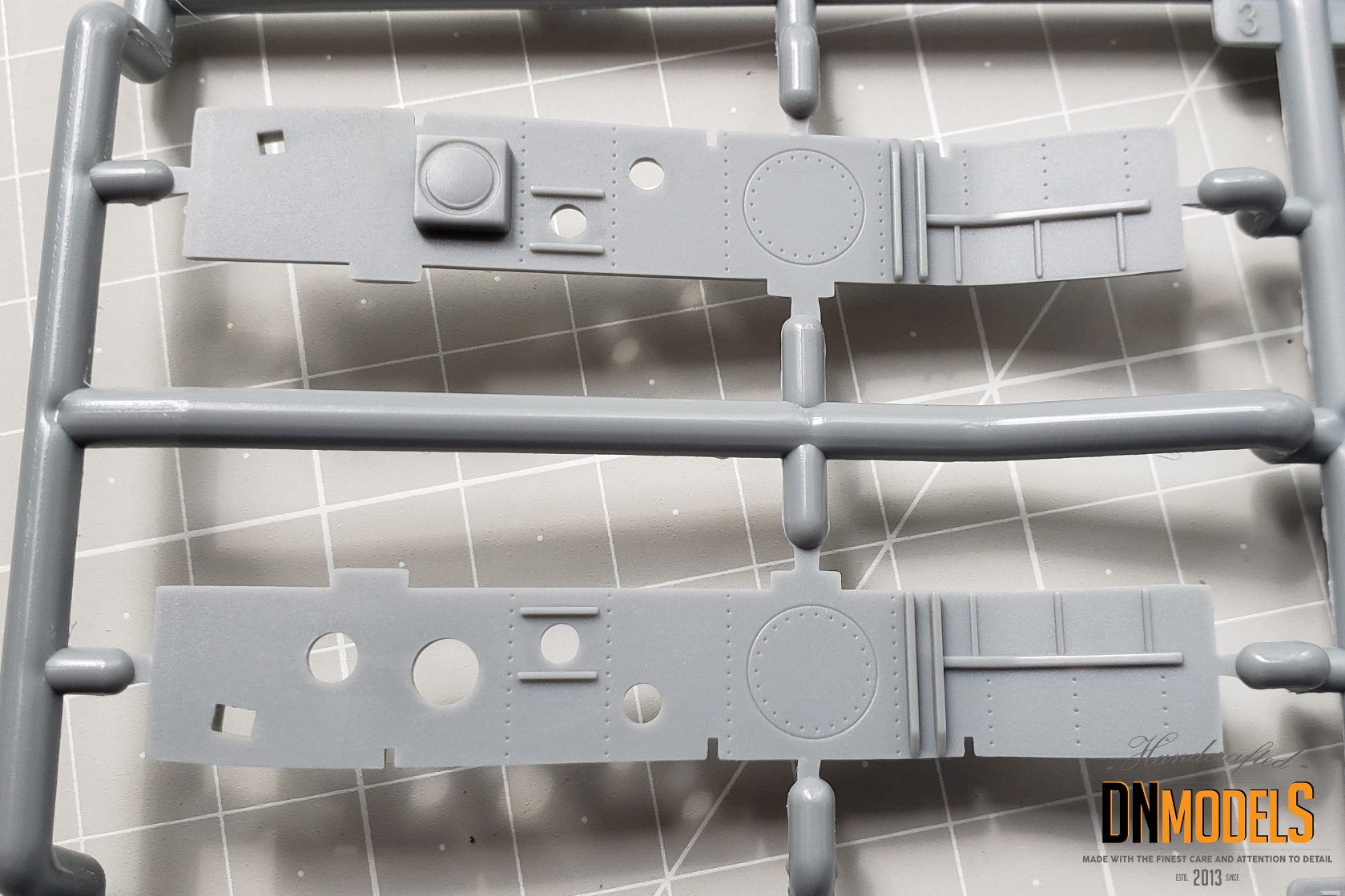 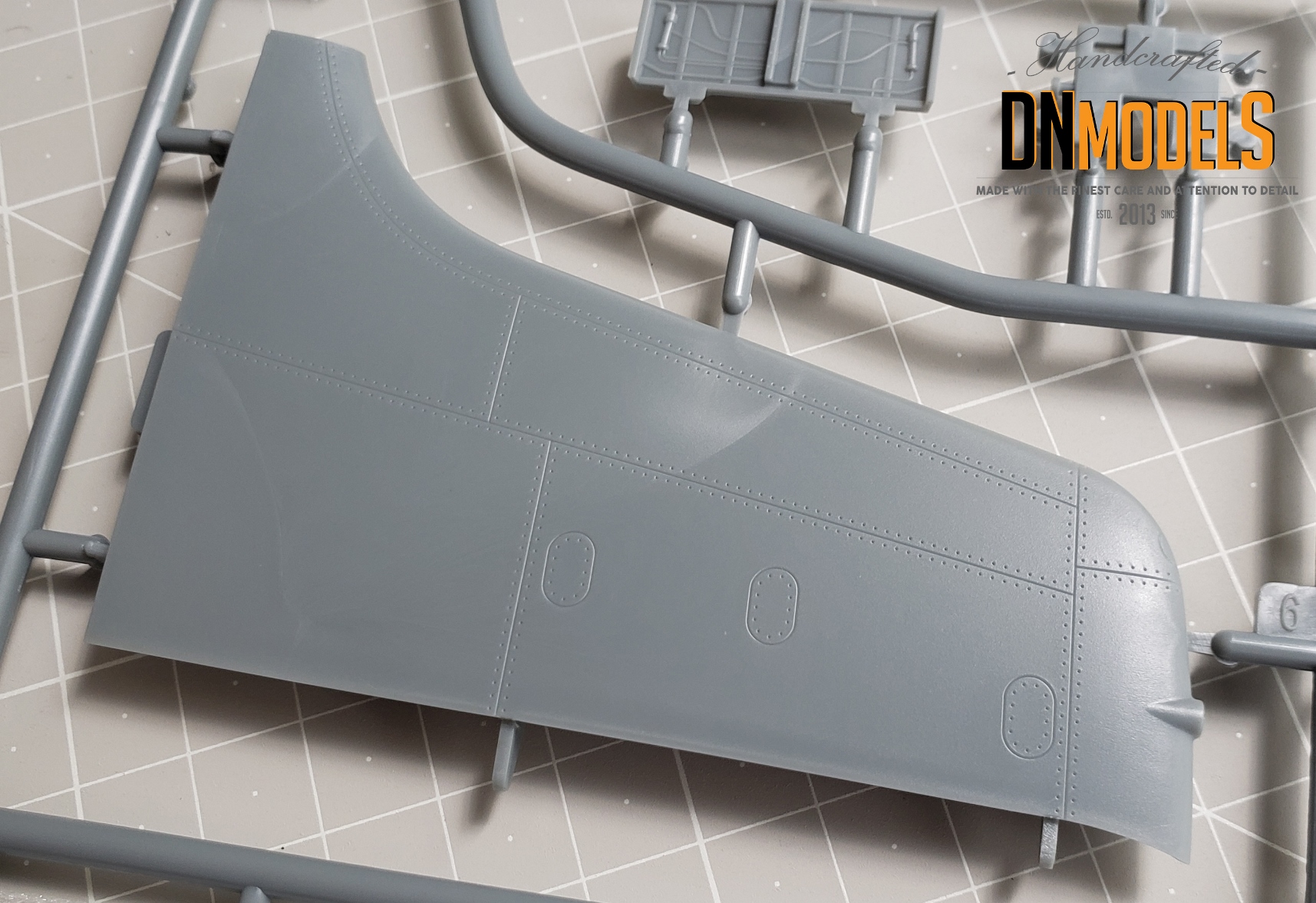 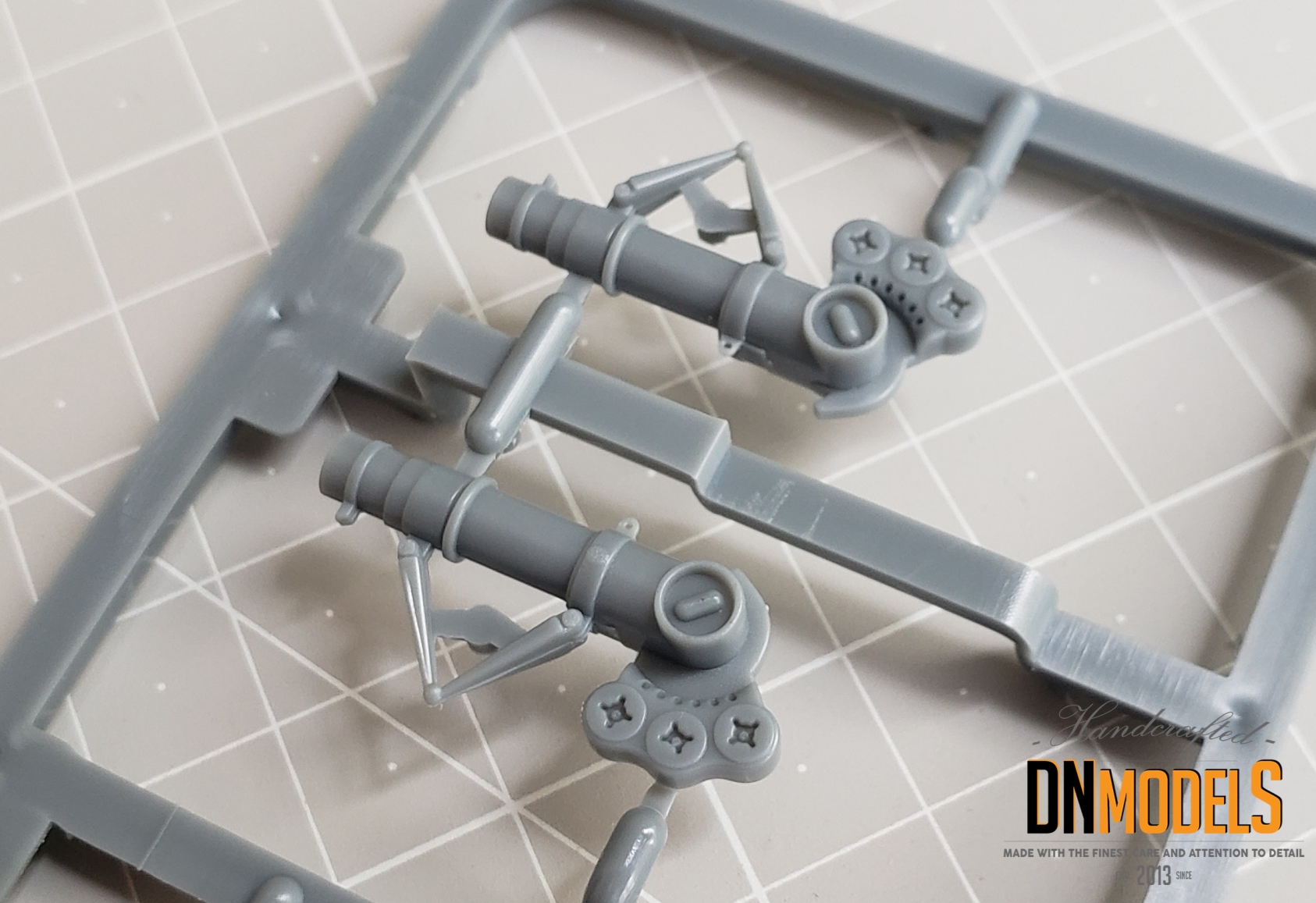 Clear parts can be described with one word only: Wonderful! Just take a look at the picture below: 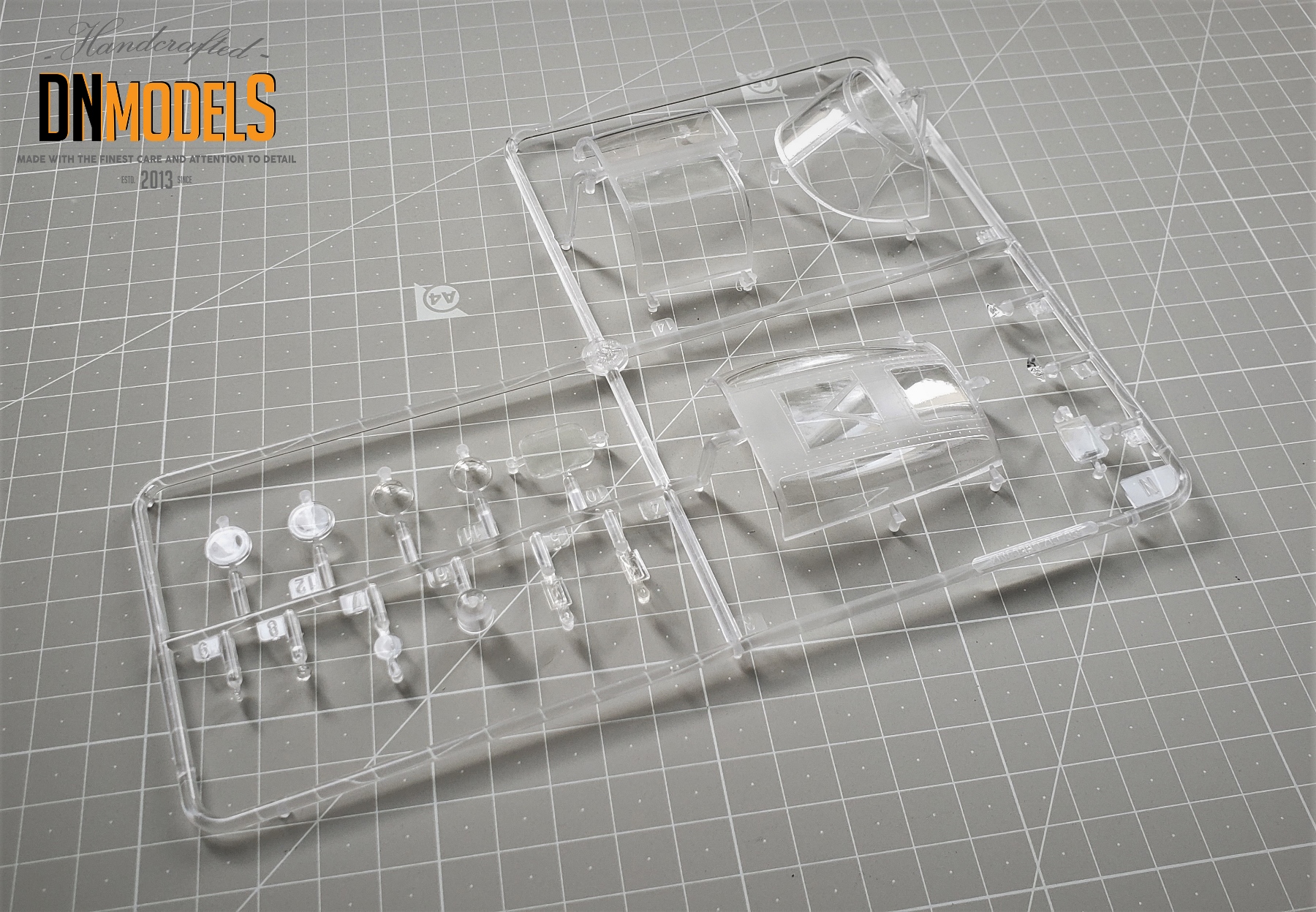 As mentioned above, the A-26B from Hobby Boss comes with three options. The decal sheet they are fitted in is not very large, although markings for this plane in this scale are more or less – substantial in size. Due to the lack of additional information though, aftermarket options will be probably more attractive than what we get OOTB. The reason is one – lack of information about the specific planes, two – more interesting and probably visually attractive options on the aftermarket scene.

With that said, the decals of Trumpeter/Hobby Boss were never an issue and if you want to stick to the box contents, they are more than acceptable option. With that scale though, decals are better put off and substituted with masks. This provides maximum realism and guarantees that there will be no issues with bubbles, silvering or ripped edges. 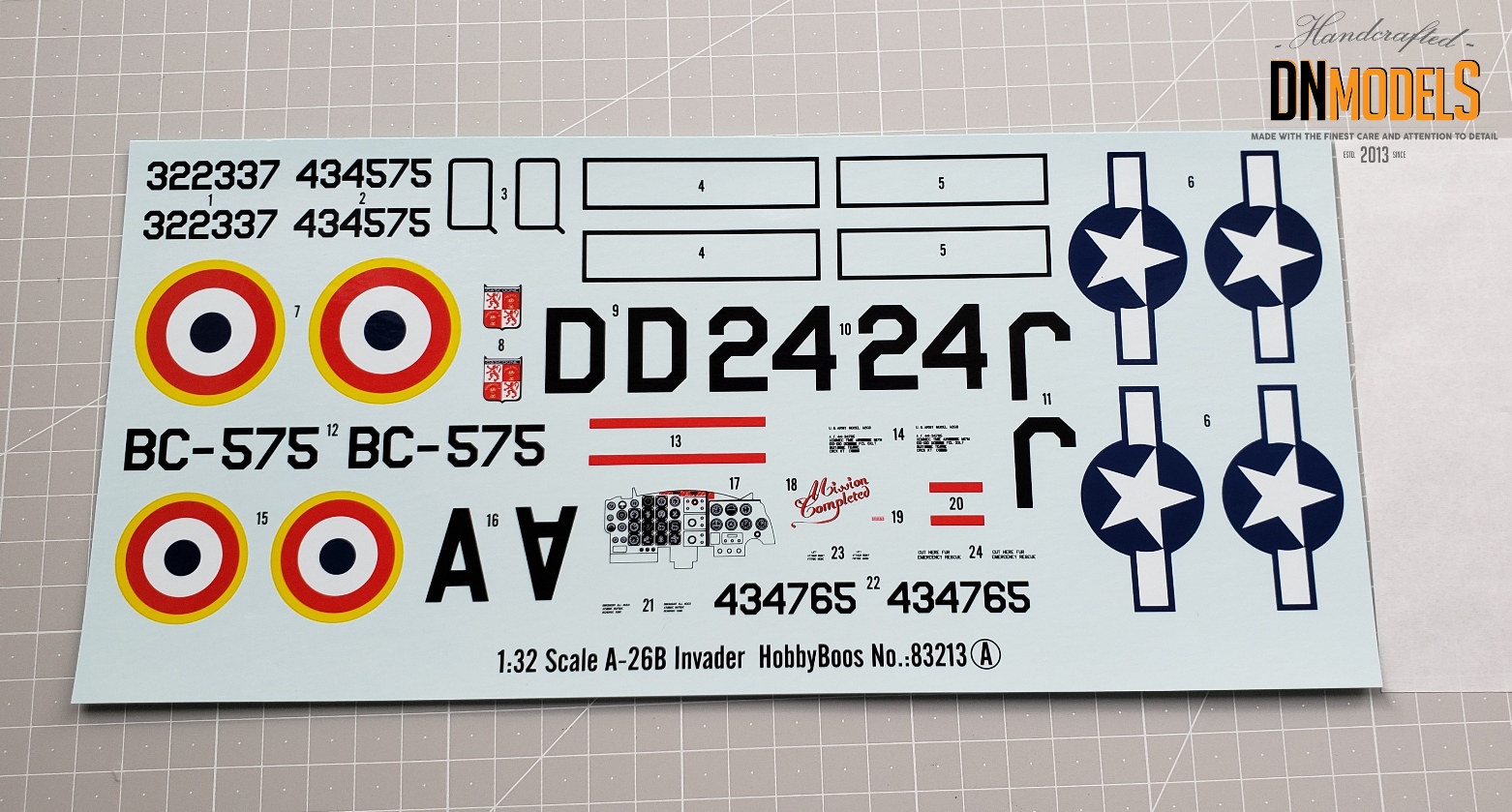 The A-26B Invader kit features two extras: rubber tires and small PE sheet. Neither of those deserves attention though. Not that they are bad, on the contrary. They are acceptable. However, PE is rather thick and for such a big bird it is insufficient in terms of part numbers. Rubber tires are also kinda useless. They are stiff and cannot provide the sag required, thus exchanging those for resin aftermarket parts is the better option.

The thing that is missing and will probably be one of the most important and almost mandatory add-on are the metal struts. One of the things that dictates their usage is the size and the weight of the plane in 32nd scale. The other is, that metal struts are often more detailed than the plastic OOTB parts, which in this scale is highly demanded option. So yes, there are extras that comes with the kit, but let’s get real – they are not enough nor at the required level. 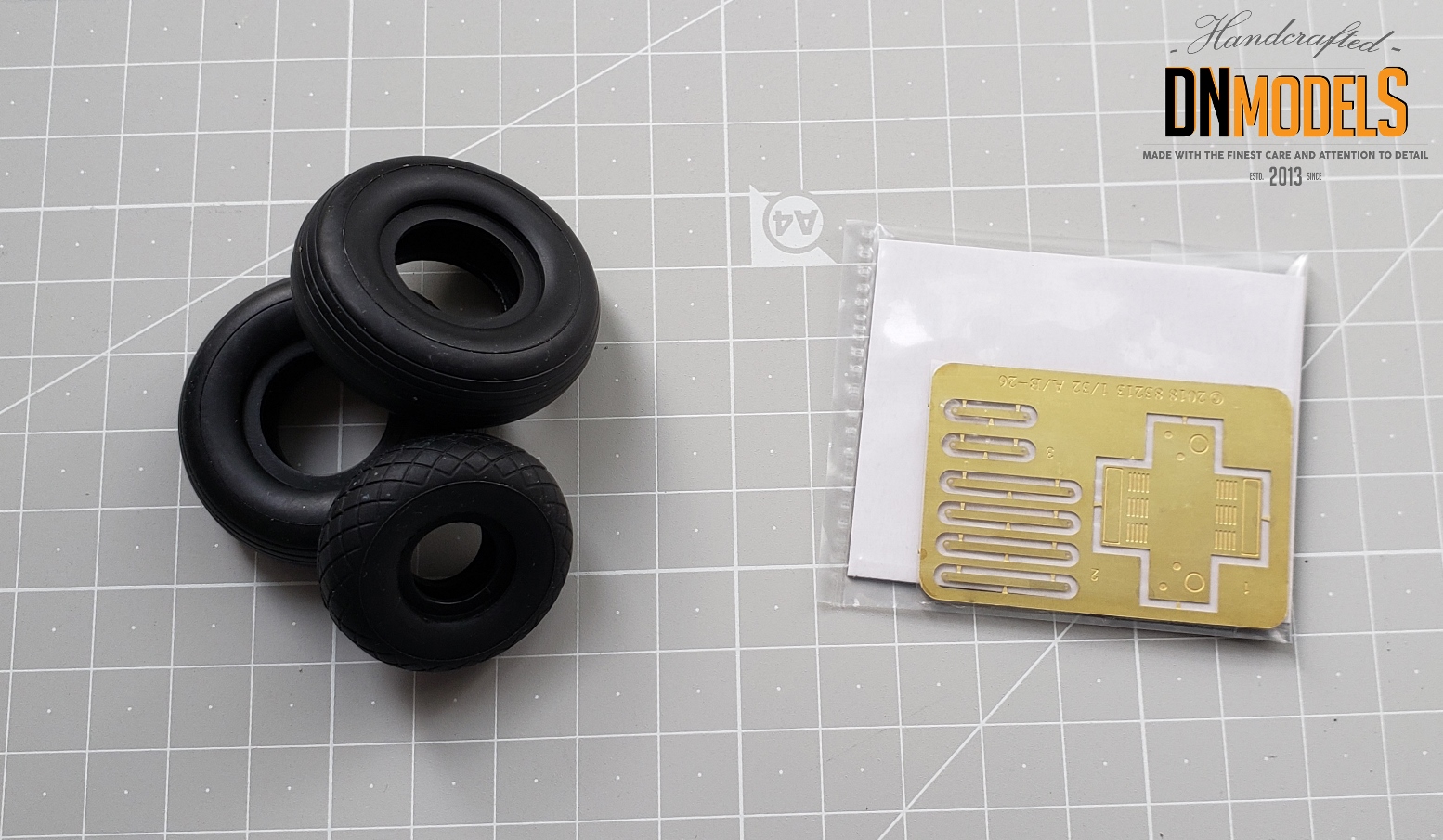 Even if the above written might sound more on the negative side, the conclusion about this plane is mostly positive. All that is mentioned like a downsides is justified by the price and the fact that Trumpeter and Hobby Boss, despite their mass production of kits are a B player on the market. Even with that, they produce one of a kind kits on subjects that are with high demand.

Another thing mentioned above is that the Invader was overdue. This is another reason to get this kit immediately. It is a lovely looking plane and despite the expected inaccuracies /which OOTB builders prefer to forget/, the need for aftermarket and lack of historical reference, we have to give it to Hobby Boss. Another spot on hit, closely following the Liberator duo released last year.

So yes, the kit’s worth it. It deserves attention and it looks great. You will never get the proper “A” quality from Trumpeter and Hobby Boss, but you will never get that subject from the A players either. So you cannot have your cake and eat it too …