But let’s dig a bit deeper. Because this kit deserves it.

Tempest is, for whatever reason, often neglected and forgotten subject when it comes down to WWII British Fighters. It is all Spitfires and Meteors. But Tempest actually deserves a lot more. It is a beautiful aircraft and was an amazing war machine. But we are not going to get into the history realm of the bird, just into the Eduard’s latest release.

Probably Eduard saw the option of releasing a decent Tempest long ago. But they took their time and released what is probably one of the very best 48th scale props on the market today. Not as a packing, nor as options. It is so good, because Eduard exploited to the maximum the possibilities of the modern tooling as we know it today.

It is simple as that – only a glimpse at the rivets that Eduard applied on the Tempest will be enough to leave you speechless. So much is embedded in this kit, that is hard to believe that this is 48th scale. Now, there are already in-build reviews, completed aircraft and opinions from all around the World. And even though they differ slightly one from another, they all agree that the kit is great.

What makes it so great is the devotion of the company that made it in the first place. For example: the cockpit is not perfect OOTB. Neither was Eduard’s MiG-21 cockpit. But the Czech company made sure that Brasin sets will be released and fill all the gaps. No doubt about it, Tempest will get that as well. And not only Tempest Mk.V which is the first one released. All of the upcoming versions will get their share of resin. 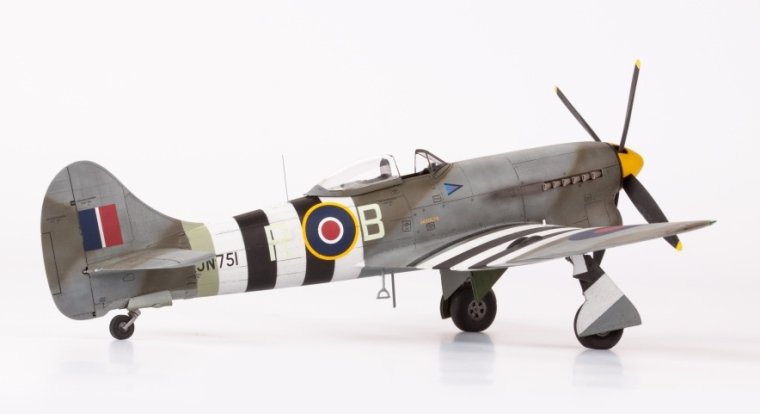 Most likely Eduard will release Dual Combos, Limited Editions, Royal Class kits and what not, because this platform is very good from its very beginning. There is hardly any flaws noticeable with this kit. Maybe some details can be thinned or improved with aftermarket. But again, this is only the first option released so far and we all know that Eduard are never content with only one boxing of their toolings. Pretty much like Hasegawa.

So again, what is so great about this kit? Well Cartograf decals for 6 options. Pre-painted Photo-etch included. Masks for the canopy too. Perfect plastic, great fit and most importantly – modern day riveting and panel lines. That last one is its strongest side. No wonder why many of the IPMS winners lately are 48th scale kits or smaller. They are getting better by the minute.

What more could a modeler ask for from a kit? If there is something, Eduard most likely know the answer to that question. Their Tempest is brilliant and its worth every penny. There is no need from an in depth review either. There are plenty on the web already. Yes, the packing is not perfect, clear parts are sitting on an odd-shaped sprue. So what? It is still one of the very best in its scale. And definitely – the very best Tempest released so far. In any scale.